Has the game lost what has made it special?

Rainbow Six Siege players are getting fed up with the crossover skins and goofy cosmetics in the otherwise serious, competitive FPS.

The R6 community took to Reddit to call out Ubisoft for the most recent crossover, which featured a "Mr. Meeseeks" bundle for hard-breacher Ace. The bundle features a pretty goofy skin — and this is apparently the final straw for hardcore players. 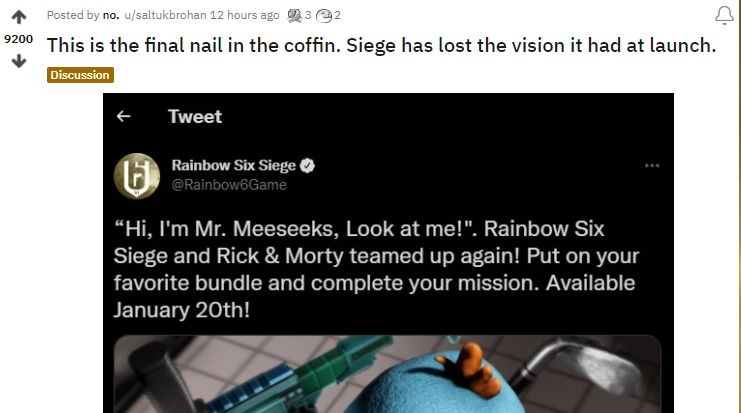 This isn't the first time Rainbow Six Siege has featured Rick and Morty skins. There have been other crossovers and events throughout the past few years as well that also took players out of the usual serious tone and appearance of the shooter.

This includes the heavily debated Rainbow is Magic event. The adorable event was a sparkly and pink look back at players' childhoods. It came as a shock to the fanbase, since Siege is one of the most grounded and serious shooters on the market right now. But others really enjoyed the hilarious change.

Then there was that Sugar Fright event that turned operators into horrific puppets. That was something.

While many players have noted that the whimsical events and cartoonish crossovers are a fun break from the serious tone of Siege, many have asked Ubisoft to have them turned off in competitive matches. Unlike other shooters, the skins you wear in Siege can impact how visible you are to the opposing teams, meaning a teammate in unicorn skin will most likely put you at a disadvantage.

Rainbow Six Siege has become less and less "realistic" as developers have continued to do these kinds of crossovers, inspired by the likes of Apex Legends, Fortnite, and Overwatch. For many fans, the clash between the game's serious gameplay and these wacky cosmetics are more frustrating than entertaining.

And Mr. Meeseeks has put these frustrated fans over the edge.