With the announcement of the R6 World Cup, we asked community as well as a number of casters who they think should represent their nation at the inaugural event.

As announced two weeks ago during the Ubisoft Forward digital event, Summer 2021 will see the very first "Rainbow Six World Cup" as 20 national teams will compete for their nation and title of 6 World Cup champions.

The format sees the 14 nations below invited directly to the tournament with the remaining six coming from online qualifiers next year -- two from Europe, one from LATAM, one from South-East Asia, one from South Asia, and one from the MENA Region.

The teams competing must have all five players be citizens of the country they are representing and the lineup can't include more than two current teammates -- the whole of BDS can't represent France, for instance. With these rules in mind, we asked both the community and a representative of eight of the biggest nations involved which five players should represent their country:

SiegeGG released a public poll asking who followers would pick as their ideal national lineups with the results collated below. Take in mind that by collating all the individual picks, role considerations would likely have been lost. All players with a single pick have been omitted from the images below as well as all non-relevant picks (such as a German player listed for Team France or duplicated names in a single response).

The United States of America

A total 15 out of the 20 players from the traditional big-four US Division teams of TSM, SSG, DZ and OxG achieved more than one vote, while the cores of both SSG and DZ filling out the top picks. Right the top, however, sees the lone Team SoloMid player of Jason "Beaulo" Doty as he was included in almost every Team USA pick. 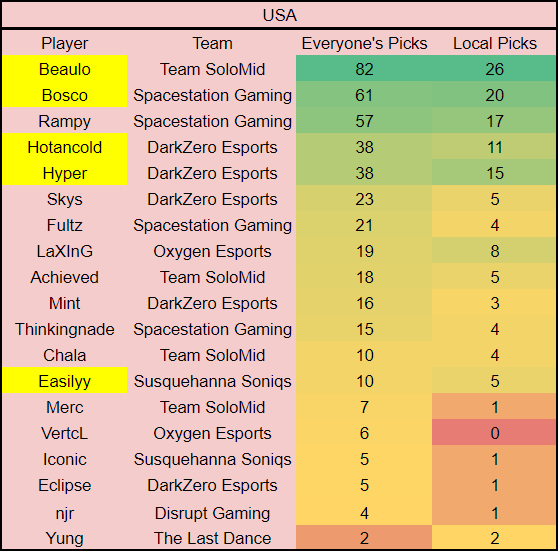 The American caster of Samuel "Stoax" Stewart listed this as his ideal lineup, however:

Once again, we see Beaulo leading the team, alongside Bosco and the top two DarkZero picks of Hotancold and Hyper. The lone change to the fan vote sees the 2020 Six Invitational MVP of Rampy be replaced by Kevin "Easilyy" Skokowski, likely as Beaulo, Hyper and Hotancold are already primary fraggers.

With four of these players finishing in the top five by SiegeGG Rating at the Regional Six Major (with the lone exception of Easilyy who didn't qualify for the tournament), Beaulo, Bosco, and Rampy can likely be expected to be a part of the roster.

The fan and expert lineups for Team Canada was perfectly in line with each other, with the three Canadians competing in the US Division joining the two newcomers on the CA Division champions. 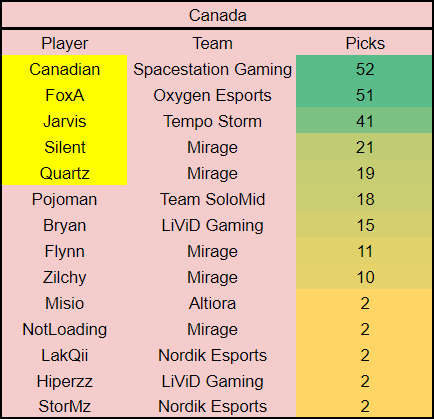 Both the community and the Canadian caster of Jesse Chick, therefore chose the following lineup:

All but one international tournament won by a North American lineup included one of these three players and they sit as three of the most experienced players in the region.

Joining them by both metrics would be the two newest players in Mirage who finished as the top two performing players in the team's close 1-2 defeat against Soniqs, arguably their best performance to date.

Jesse had this to say about his prefered lineup:

Canada has a very small but very high skilled player base, so I didn't focus on roles too much and hoped the flexibility of the veteran players could round out the roster. The biggest issues are that no one here plays Smoke, and that 3/5 are Sledge mains. You could swap in Flynn or Bryan if you wanted to solve those problems, but then you've got to take away one of the young guys and I think Qrtz and Silent on the roam will be too good to pass up.

Flynn and Bryan both are currently active players in the Canadian Division for Mirage and LiViD and were very popular players in the fan votes as well, making them possible alternatives to the young gunners, while the current coach and ex-player of Team SoloMid of Pojoman was also a popular alternative assuming he would want to take on a player role again.

One of the clear favourites to win the 6 World Cup will be Team Brazil, as every top player in the Latin American region would be able to compete for the same national lineup. 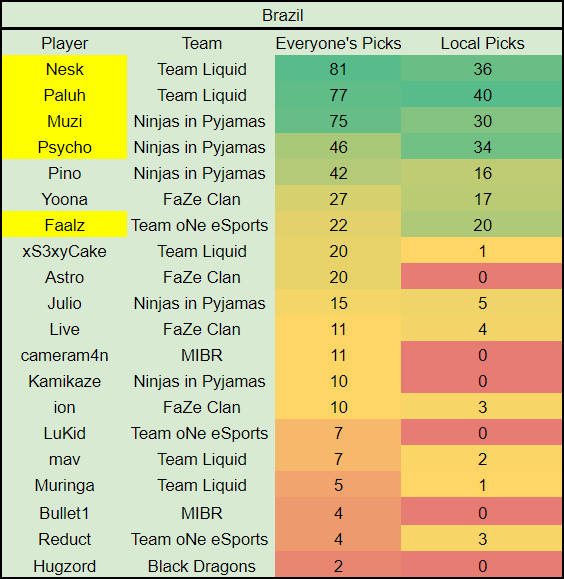 Ninjas in Pyjamas is easily the top team in LATAM right now after winning both the Regional Major and being the best Brazilian team at the last Invitational. With this, the team's top-performing player from these two events -- Murilo "Muzi" Moscatelli -- and the team's in-game-leader -- Gustavo "Psycho" Rigal -- will be the favourites to represent the team on Team Brazil.

Next up, the region's most successful lineup is Team Liquid, so their two-star players of André "nesk" Oliveira and Luccas "Paluh" Molina would be the obvious choice to add to the lineup. This, therefore, leaves just one player spot left, which the Brazilian caster of Victória "Viic" Rodrigues picked to be Team oNe's player of Kaique "Faallz" Moreira:

I think that taking the first split of BR6 and the last major LATAM, it’s impossible to not have NiP and Liquid as the team base. Paluh and Nesk are killing it in BR6, they are insane. The NiP players were very hard to choose, because Pino could be in Team Brazil too. But I choose Muzi because he is just an incredible player and could work better with the team, maybe. But to be honest, both Muzi and Pino could be on the team.

Psycho today is one of the best IGLs in Brazil, so I think he has to be on this team. And for Faallz, because Team oNe is also one of the greatest teams in Brazil and he is doing an amazing job as a support for his team. It’s was really hard to choose, but that’s my team.

And Silence for coach, because Team Liquid has been really strong in strategies. Team Liquid is a really tactical and he could really help Team Brazil.

Other favourite picks include the FaZe Clan players of Yoona and Astro with the domestic picks falling way off after these players.

The current Team SoloMid player of Emilio "Geoometrics" Leynez Cuevas, who attended the last three Six Invitationals, three Pro League Finals, and both Six Majors is the clear favourite for the Team Mexico lineup as he is the only top-flight player from the nation. 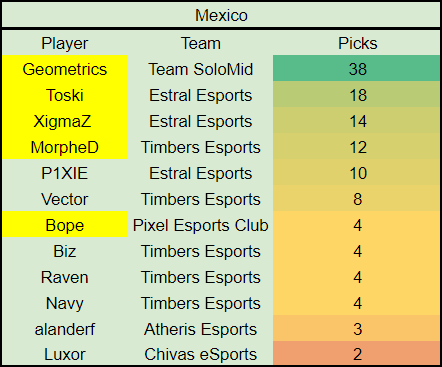 Joining him there would likely be a mix of Estral and Timbers players -- the two lineups which competed in the Mexican Regional Major. However, the Mexican caster of Rafael "Foxtrot" Jacques picked a slightly different Team Mexico.

Geo from TSM is the most experienced player from MX. Then you need two gunners from Estral, I was thinking Toski & XigmaZ, and then you add Morphed from Timbers, and the last one of the most cosistent players in the MX league, BOPE from Pixel.

The main difference here is Pedro "BOPE" Monge from Pixel Esports Club effectively replacing either P1XIE or Vector. Considering his sixth-place individual performance during Stage 1 on the more support orientated operators of Hibana and Wamai, this is a pretty feasible lineup.

There is also a possibility that should the Oxygen Esports player of LaXInG not be picked for Team USA, he could compete for Team Mexico as he is part Mexican through his father. It is unclear if LaXInG has Mexican citizenship, however. Should this be the case, this would mean the reunion of LaXInG and Geoo who competed together on Elevate and CLG throughout Year 2.

The national "managers" will be chosen in a few months time with these people, in turn, selecting the lineups ahead of next years competition. Keep an eye out for further news on the tournament's progression as we learn more here at SiegeGG.