Three exclusive Extraction Chibis can now be preordered in the Ubisoft Store.

With Rainbow Six Extraction being launched on Jan. 20, the hype is real. In less than two weeks players will be able to get their hands on the game. However, can players purchase real Extraction items meanwhile?

Well, the answer is now yes.

Players can now pre-order the exclusive Rainbow Six Extraction chibis, which can be found on Ubisoft Store. Right now, only three operators have received special Extraction chibis: Ela, Vigil, and Lion. Each one of them costs € 19.99 and includes a code to unlock digital items. 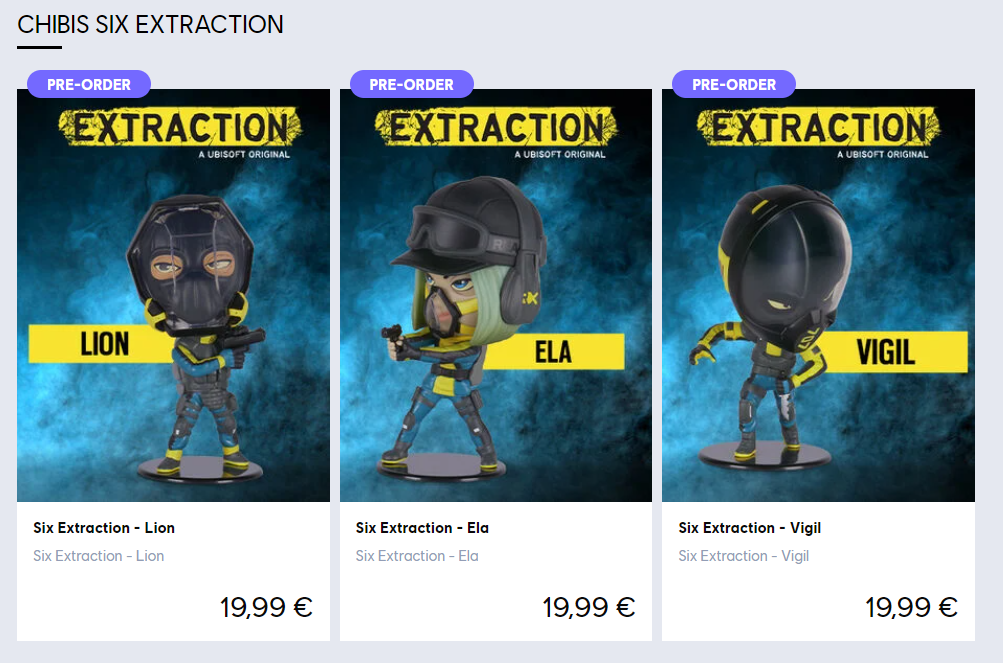 These operators look to be some of the strongest in Rainbow Six Extraction, as Vigil is invisible to the enemy's eyes when his ability is activated. Meanwhile, Ela's mines don't break once they detonate and Lion can scan a big portion of the map.

In fact, Ela's gun kit — we have seen official videos of her with Zofia's LMG equipped — might turn her one of the fan-favorite operators in the game.

Will there be more Rainbow Six Extraction operator chibis?

It is still a mystery if we will see more chibi operators being added to Ubisoft's store, however, there's nothing that leads us to think otherwise. With many fan-favorite Siege operators making their way in Extraction such as Hibana, Tachanka, or Jäger, it would be nice to have a chibi figure of them with their brand-new Extraction kit.

Rainbow Six Extraction — What operators will be included?

Rainbow Six Extraction will initially include 18 Rainbow Six Siege operators. The only downside to this is that players won't be able to use all of them from the get-go. In order to unlock them, players must complete missions.

You also have to keep in mind that operators improve by leveling them up, so a level 1 Vigil won't have the same abilities and skills as a level 10 Vigil. For more information, check our article on Rainbow Six Extraction operators and their abilities.