Rainbow 6 Extraction will feature 18 specially selected operators when it launches on January 20, 2022. These new operators all have exciting new abilities and backstories that further the series’ surprisingly immersive lore.

Rainbow 6 Extraction’s operators are all part of the REACT team, put together to take on the alien invaders. Each operator will have a “deep progression system,” allowing players to improve their abilities, boost their stats, and gain access to new loadouts and gadgets.

Here is everything we know about Rainbow 6 Extraction’s operators and how to get them!

How many operators are in Rainbow 6 Extraction?

There are currently 18 operators announced for Rainbow 6 Extraction. Twelve have been revealed by Ubisoft while six still remain a mystery.

Can you use these operators in Rainbow 6 Siege?

The roster of operators featured in Extraction will also be permanently unlocked in Rainbow 6 Siege. Here’s how:

Rainbow 6 players who have played both titles will receive the United Front Bundle in both games. It will also unlock the 18 operators in both games.

Who are the Rainbow Six Extraction operators? 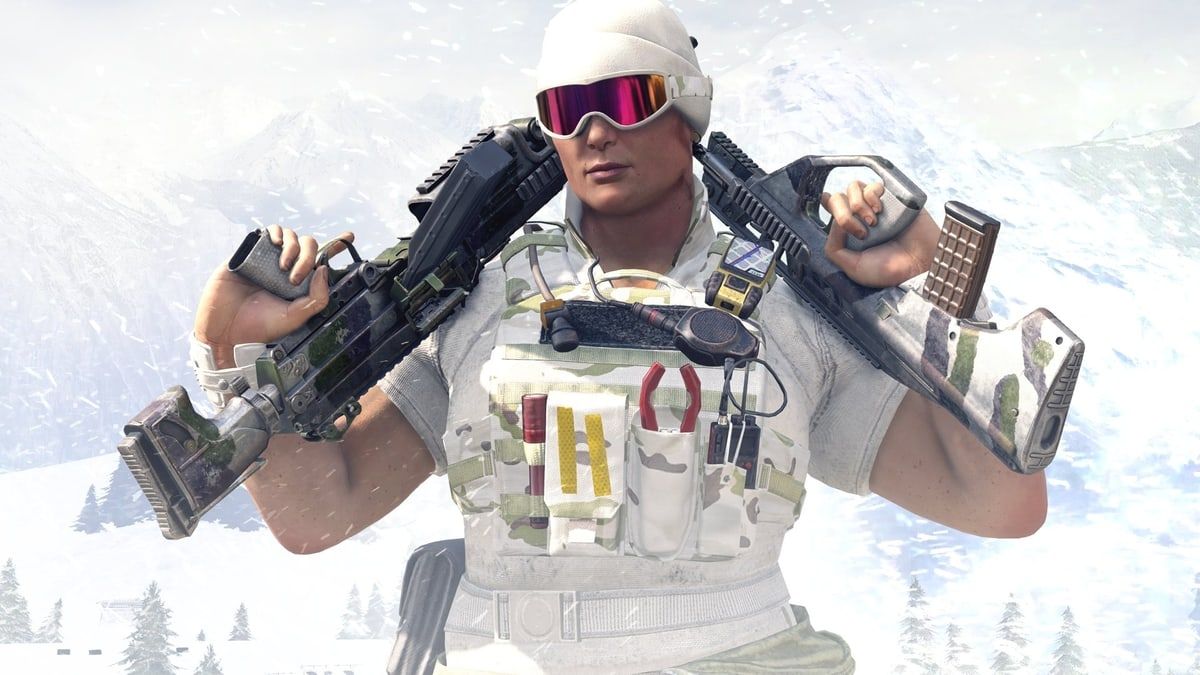 Gridlock is a mechanical systems and robotics expert thanks to her time with SASR. She is known for being self-sufficient and confidently working solo when trapping enemies.

Tori "Gridlock" Fairous is the eldest of five, known for demonstrating leadership throughout the other aspects of her life. She started competing in robot championships at an early age, inspired by her aircraft mechanic father.

Gridlock joined the Australian Army Reserves to continue the development of her mechanical engineering skills. She joined the Australian Defense Force upon graduating from university, gaining expertise with a range of weapons and intelligence gathering. She was awarded the National Emergency Medal for saving firefighters during that time.

Gridlock has TRAX Stinger anti-personnel traps that she can throw at an enemy or deploy on the ground. Enemies hit by a trap will not only take damage but move at a slower pace for a short period of time.

Gridlock has an F90 assault rifle at the start of the game. 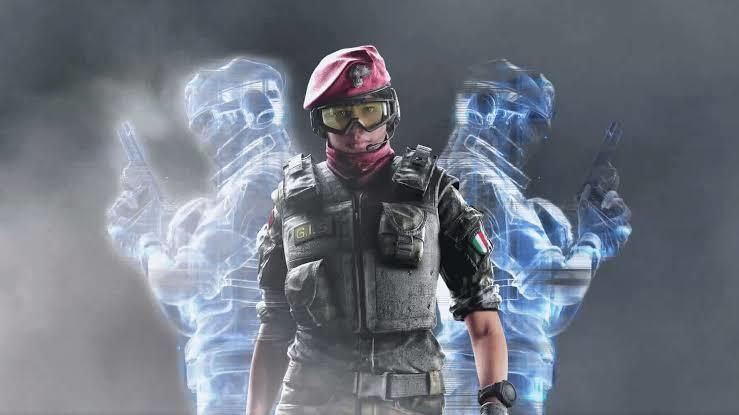 Alibi volunteered for REACT after years of deep-cover work dismantling organized crime rings with the Gruppo Intervento Speciale (GIS). The premier R6 operator wanted to provide her network infiltration skills to the cause.

Born in Libya, Aria “Alibi” de Luca is a sharpshooter that learned a lot about Italian firearms through her family business and training at a shooting range. She entered the European Championships at 10, winning gold in a variety of contests. She ended up following the police force.

Alibi’s precision shooting skills helped her move up to the elite Raggruppamento Operativo Speciale where she helped fight organized crime. She then joined the Gruppo Intervento Special, becoming an undercover agent. She spent several years infiltrating the Vinciguerra Crime Family as an arms dealer.

Alibi’s PRISMA volumetric display drone lures and distracts enemies within a certain area. The enemies that end up attacking the decoy are scanned, allowing Alibi to identify where hostile Archaeans are located.

At the start of the game, Alibi has an Mx4 Storm SMG, a pistol-caliber semi-automatic carbine. 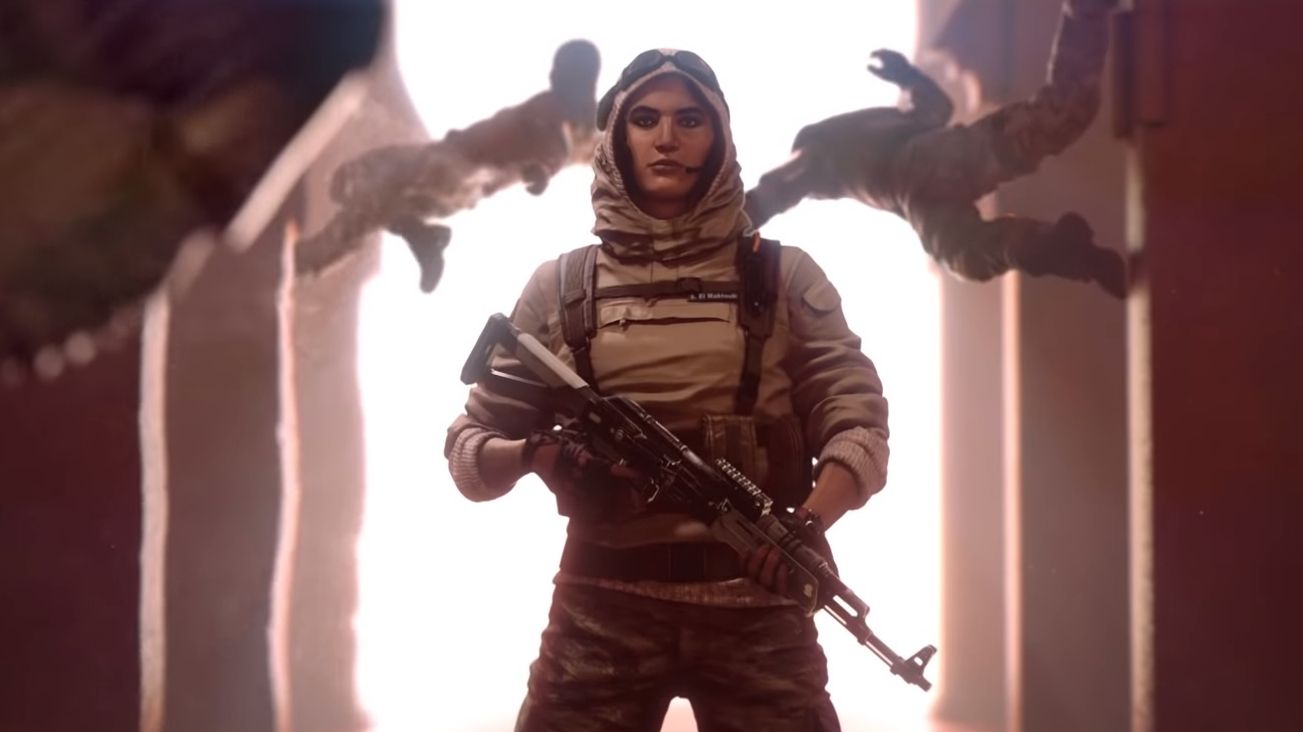 Athletic and tough, NOMAD served on the Mountain Infantry Battalion of the Groupe d’Intervention de La Gendarmerie Royale for years. This gave her a lot of environmental expertise, which now helps her fight the parasitic alien.

Sanaa “NOMAD” El Maktoub grew up in a wealthy Moroccan family. She enlisted in the military at 19, later joining the Groupe d’Intervention de La Gendarmerie Royale. She would take solo expeditions between tours, climbing the Alps and trekking through Asia’s rainforests.

NOMAD was injured while exploring Canada’s wilderness but is known for her survivalist expertise. She was recruited to Rainbow soon after.

NOMAD knocks enemies back with her AIRJAB repulsion grenade. The blast also clears the area of hazards.

The AK-74M is an assault rifle that NOMAD starts with. 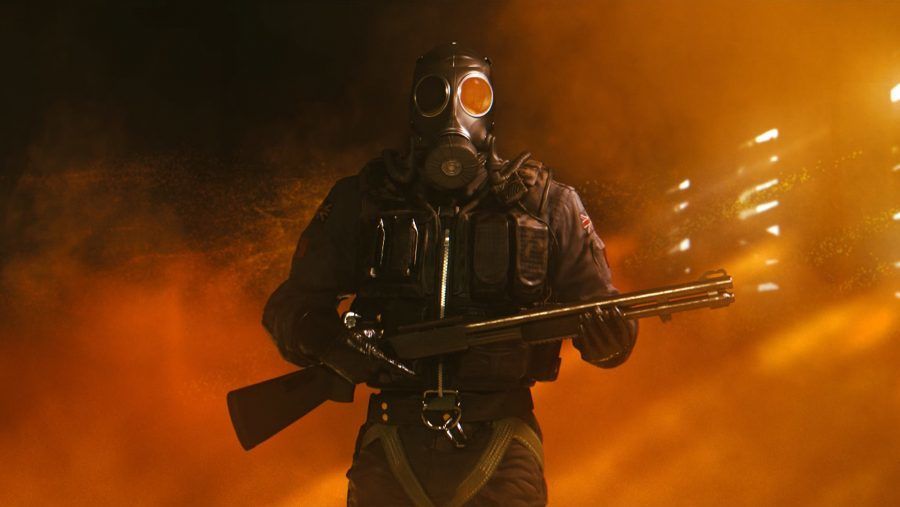 This chemistry and biology expert was quick to sign up for REACT when the parasite threat hit. He brings a wealth of operational experience to the team, using chemicals against the Archaeans.

James “SMOKE” Porter wasn’t really one for school — except when it came to science. Through tutoring and field science, SMOKE started to flourish, developing his chemistry, biology, and math skills. He enlisted in the British Army without approval from his parents.

SMOKE got bored and joined the Army Boxing Team. He was recognized for his innovation and strategic perspective. His superiors encouraged SMOKE to join the SAS.

SMOKE starts the game with an L85A2 assault rifle. 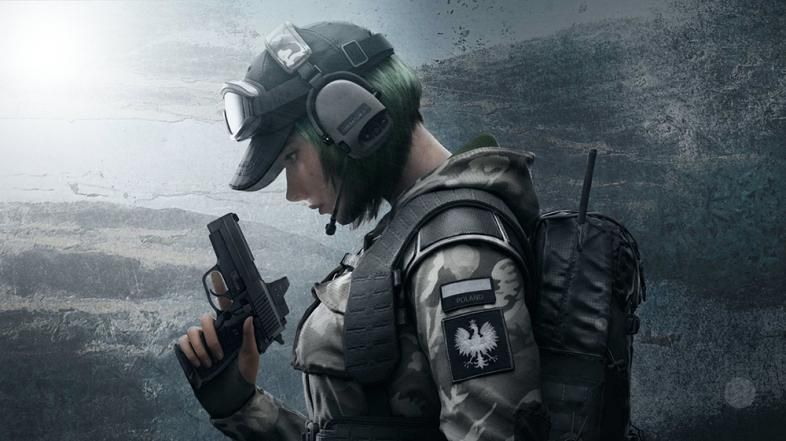 The REACT team hesitated to add Ela because of her unpredictability and lack of respect for authority. But her skills as a survivalist made her indispensable.

Elzbieta “Ela” Bosak was born in Poland as the younger daughter of a Polish Special Forces unit GROM former commander. She would often listen to her grandfather tell stories about his time in World War II, inspiring her to be defiant.

Ela found her father’s military school difficult, experiencing bullying that led to her being expelled. She graduated from a nearby high school and then left Poland for Berlin, hoping to find more freedom. She was offered a job doing private security and became known for her survivalist tactics.

When her father died, Ela started training to pass the GROM selection. She was taken in due to her determination and abilities, joining her father’s unit. One of her most well-known ventures became her time on Operation Orange Sky. She spent months infiltrating a warlord’s inner circle, dismantling his network without harming anyone.

Ela has a machine gun at the start of the game, the Scorpion EVO 3. 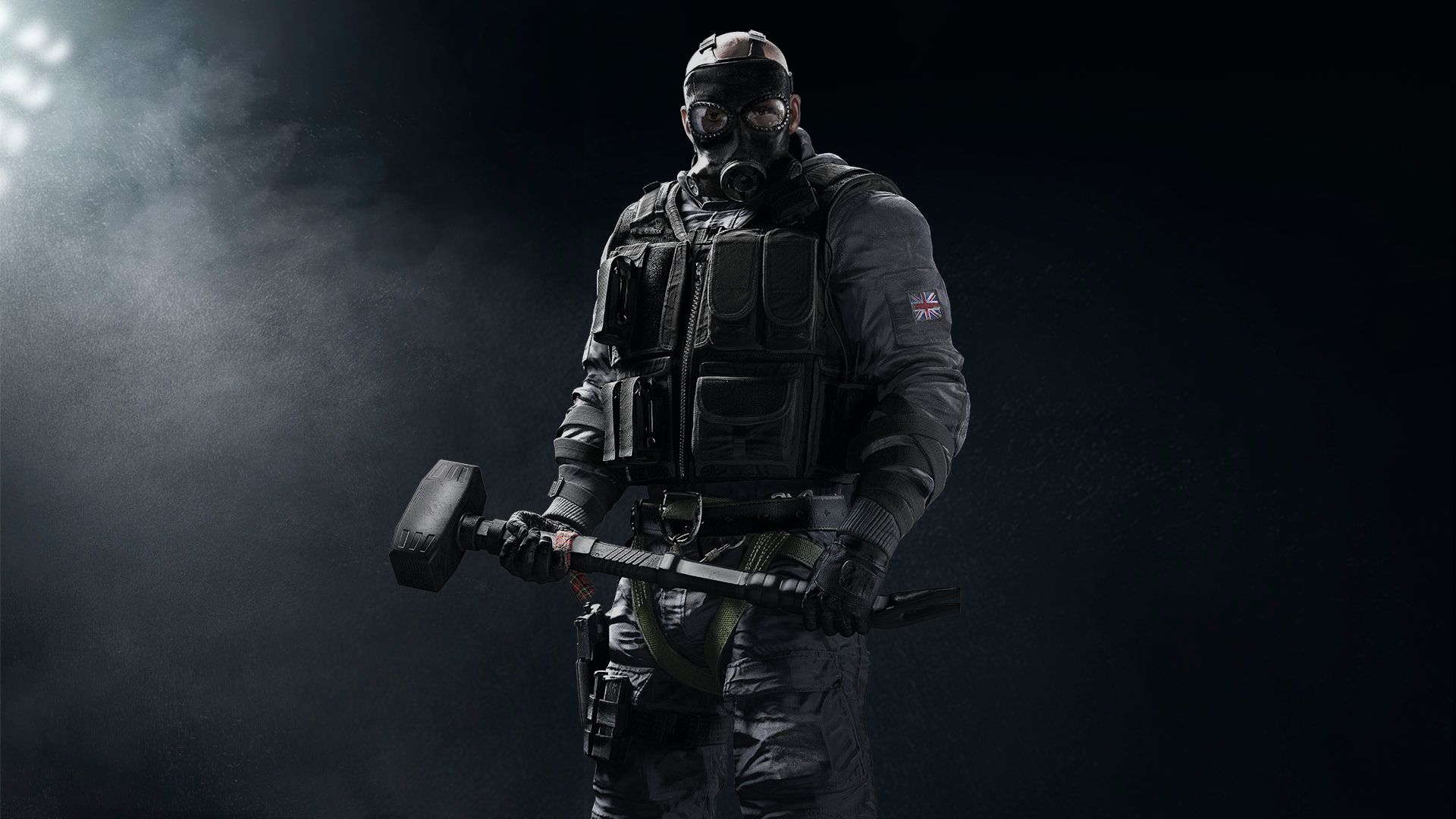 SLEDGE volunteered for REACT right when he heard that the aliens were back in New Mexico. He has an imposing physical stature and violently wields a heavy melee weapon, making him the perfect candidate for brutally taking on the aliens.

Seamus "SLEDGE" Cowden was known throughout his life for his athleticism. He quickly became the Captain of the Scotland National Rugby Union Team before joining the 3rd UK Mechanised Division of the British Army by the age of 18.

SLEDGE earned the nickname “Iron Sides.” He was recruited by the SAS where he holds multiple speed and strength records. He quickly became an expert in mechanical, ballistic, explosive, and thermal breaching strategies.

SLEDGE’s Caber is a tactical breaching hammer that stuns parasites and destroys walls. This allows his teammates to take new paths on the map.

SLEDGE starts the game with the M590A1 shotgun. 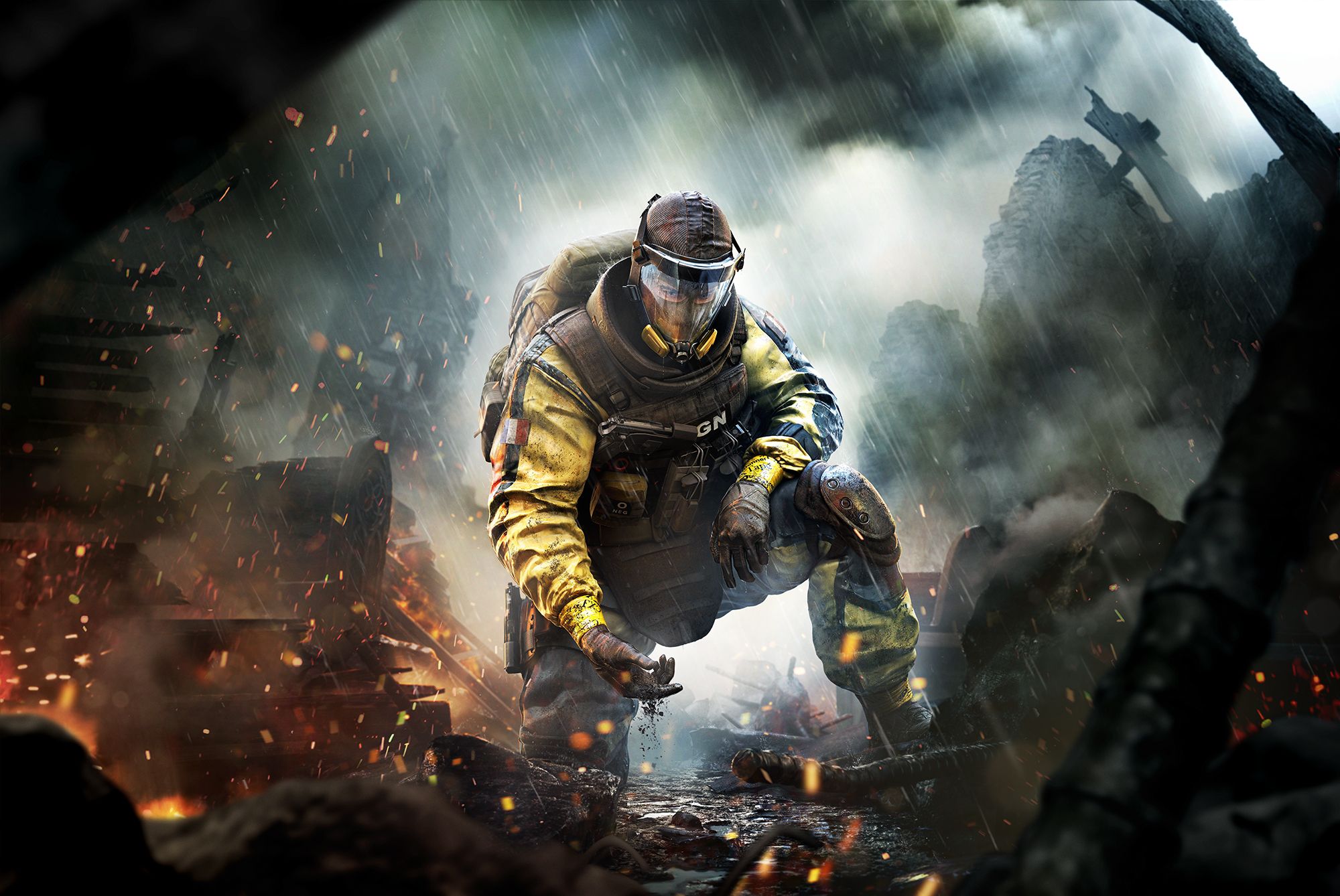 Known for leading the charge, Lion is a confident operator that is all about gathering intel and making moves.

Olivier “Lion” Flament was born to conservative parents but Lion was quick to fight their Catholic faith. He was a rebellious teen that soon got caught up in drinking and partying. His parents soon found out that he got his girlfriend, Claire, pregnant and he was promptly kicked out of the house.

Lion joined the French Army to gain control of his life after a new low. He became a rescuer recruited into the 2nd Dragoon Regiment. He worked primarily with their environmental monitoring sensors. Lion worked hard for his son, becoming fascinated with bacteriology and virology.

Lion has an EE-ONE-D drone that detects all moving enemies in an area for a medium period of time. It requires a recharge between uses.

While waiting for his drone to reload, Lion enters the fray with a V308 assault rifle. 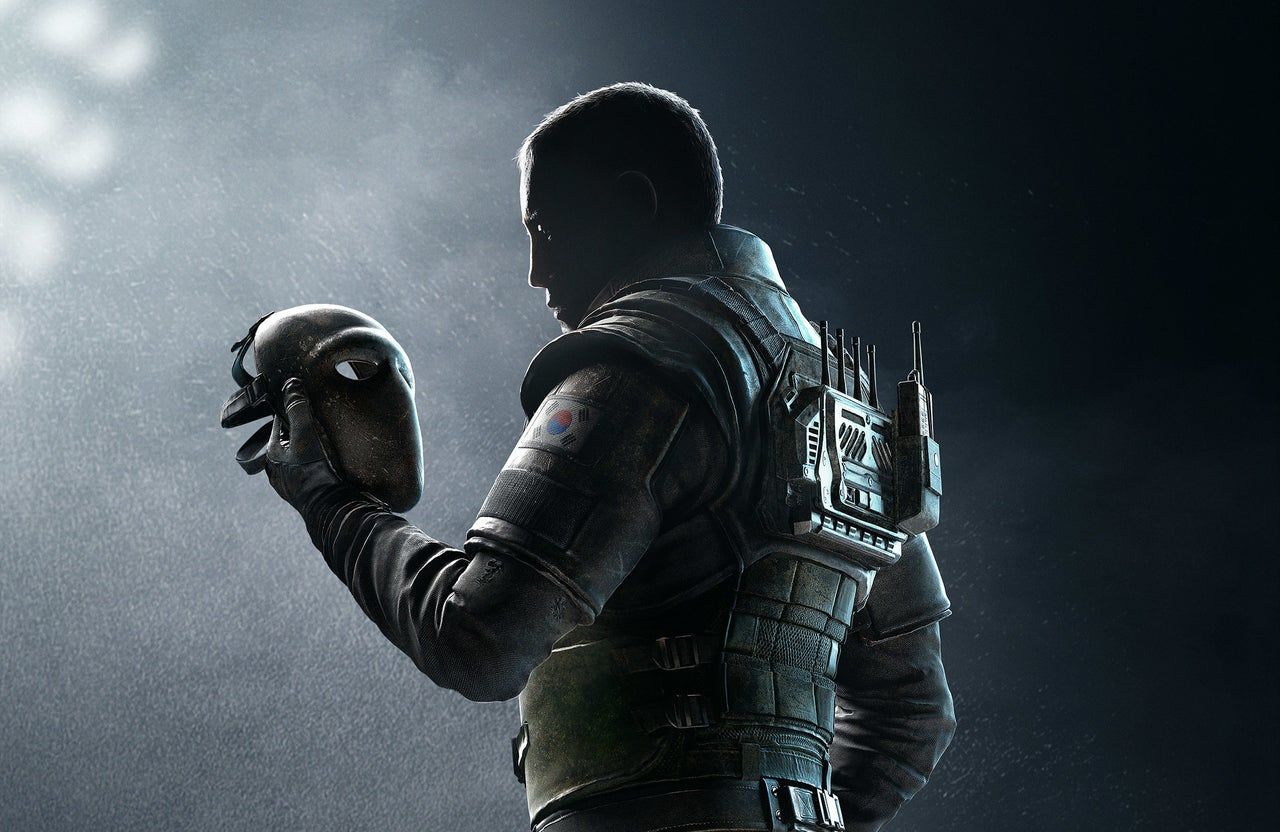 This mysterious operator remains something of an enigma to the REACT team. His military background is largely unknown. But Vigil’s electrical engineering skills made him the perfect candidate.

Chul Kyung Hwa aka Vigil doesn’t remember much of his early life in North Korea. His family attempted to escape North Korea, resulting in his brother’s drawing death. His father later committed suicide after the heartbreak, leaving Vigil as an orphan afraid to show his emotions.

Vigil was adopted into the Hwa family, changing his name and teaching him how to follow orders. Vigil gravitated towards electronics. He entered the South Korean army as a sailor focused on stealth technology.

Focused on stealth, Vigil uses an Electronic Rendering Cloak to become undetectable for a short period of time. This requires a recharge between uses.

Vigil starts the game with a machine gun called the K1A1. 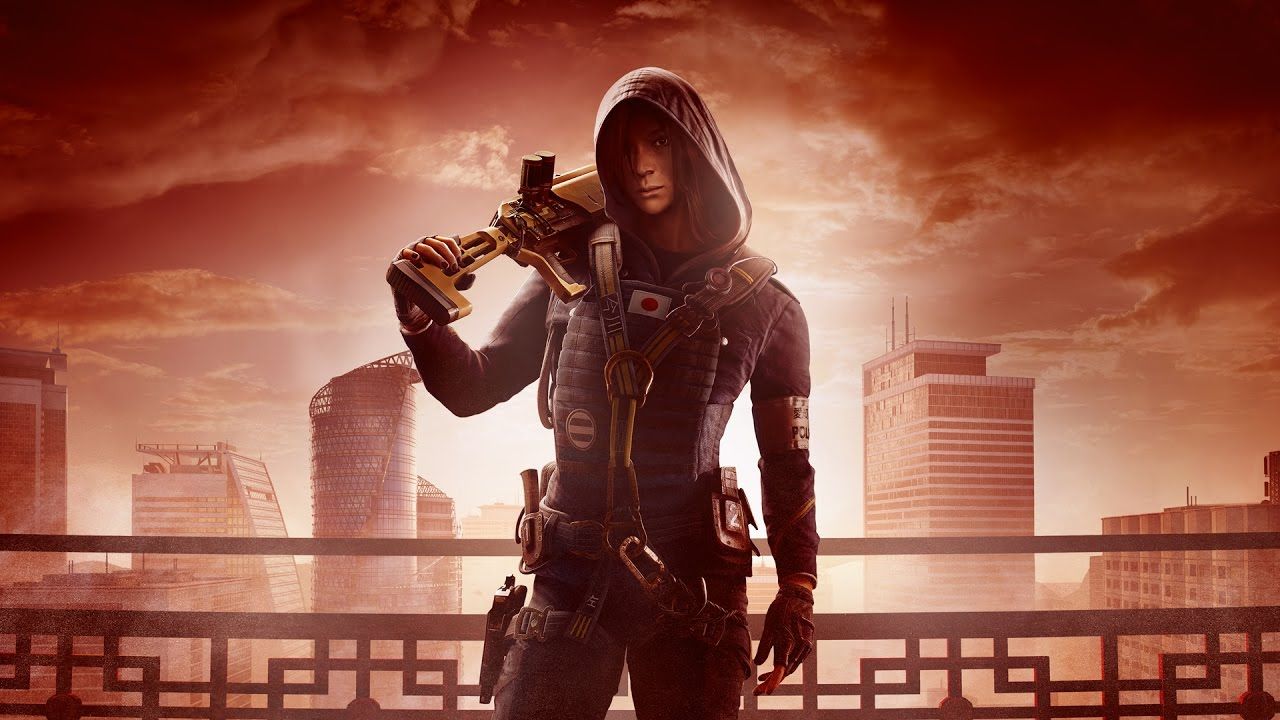 An expert in high-risk infiltrations, it’s no surprise that REACT approached HIBANA right away. The tactical skills she has gained from her extensive counter-terrorism background have made her deadly against Archaeans.

Yumiko “HIBANA” Imagawa is the daughter of a butcher, skilled in Kyudo from an early age. She traveled the world, perfecting her martial arts techniques. She then attended the National Police Academy, showing impressive leadership skills. She quickly moved up the ranks.

HIBANA acquired a rare tactical versatility, including a proficiency in tubular assaults, including busses, trains, and airplanes. She started a secret relationship with Pulse, who she later killed during the 2020 Tournament of Champions.

HIBANA has an X-KAIROS grenade launcher that detonates sticky explosives. They stick to all surfaces. When detonated, they deal damage that even penetrates armor.

HIBANA starts off with the TYPE-89 assault rifle. 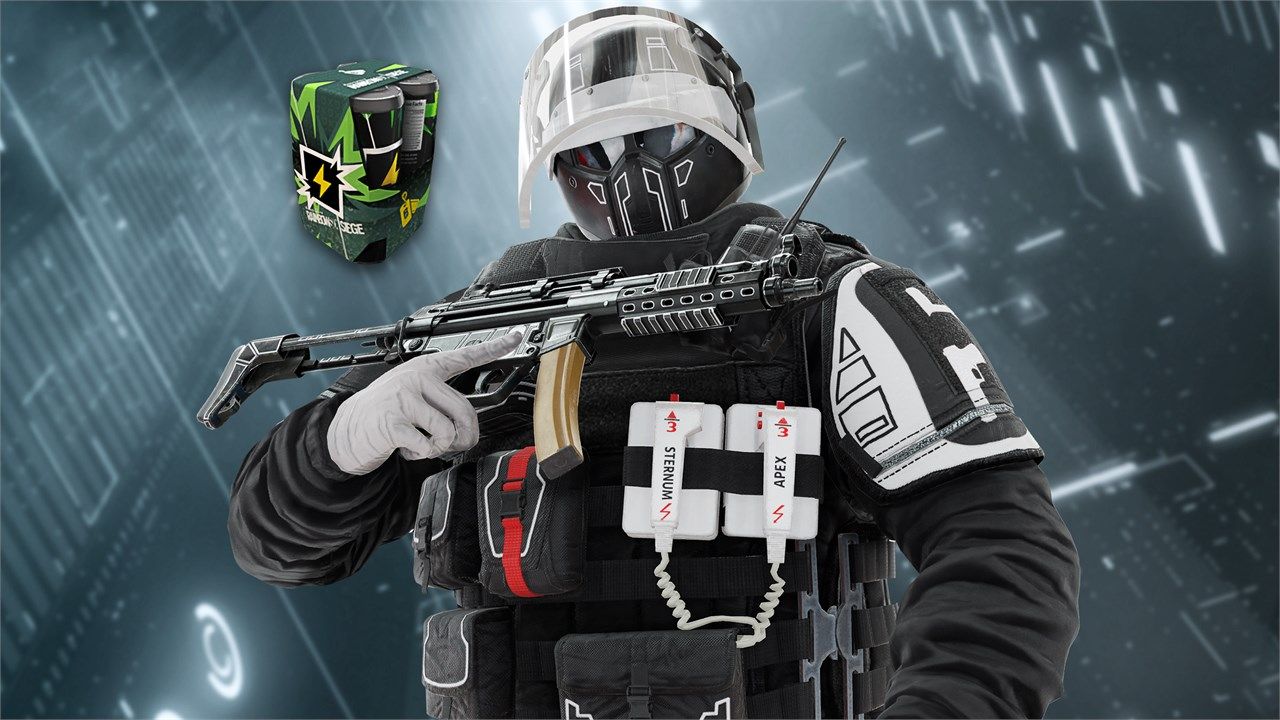 DOC isn’t an ordinary support operator. They have tactical expertise that helps them heal teammates with ease. DOC is seen as an invaluable asset when it comes to containing the parasite, keeping his team together.

Gustave “DOC” Kateb was born in France to an affluent family with a military lineage. DOC joined Medecins Sans Frontieres halfway through his medical studies, volunteering on emergency frontline aid missions around the world.

DOC’s main discipline is toxicology and ecotoxicology. He was one of the first to study the parasites in Truth or Consequences, New Mexico, showing how the aliens “created monsters.” DOC helped secure the Soviet capsule where the parasite originated, although the parasites evolved into the Archaeans over the next few years.

Using his STIM pistol, DOC can heal and revitalize himself or his teammates. This means he can even revive teammates from afar.

When DOC wants to get in on the action, he uses his SC-CQB shotgun. 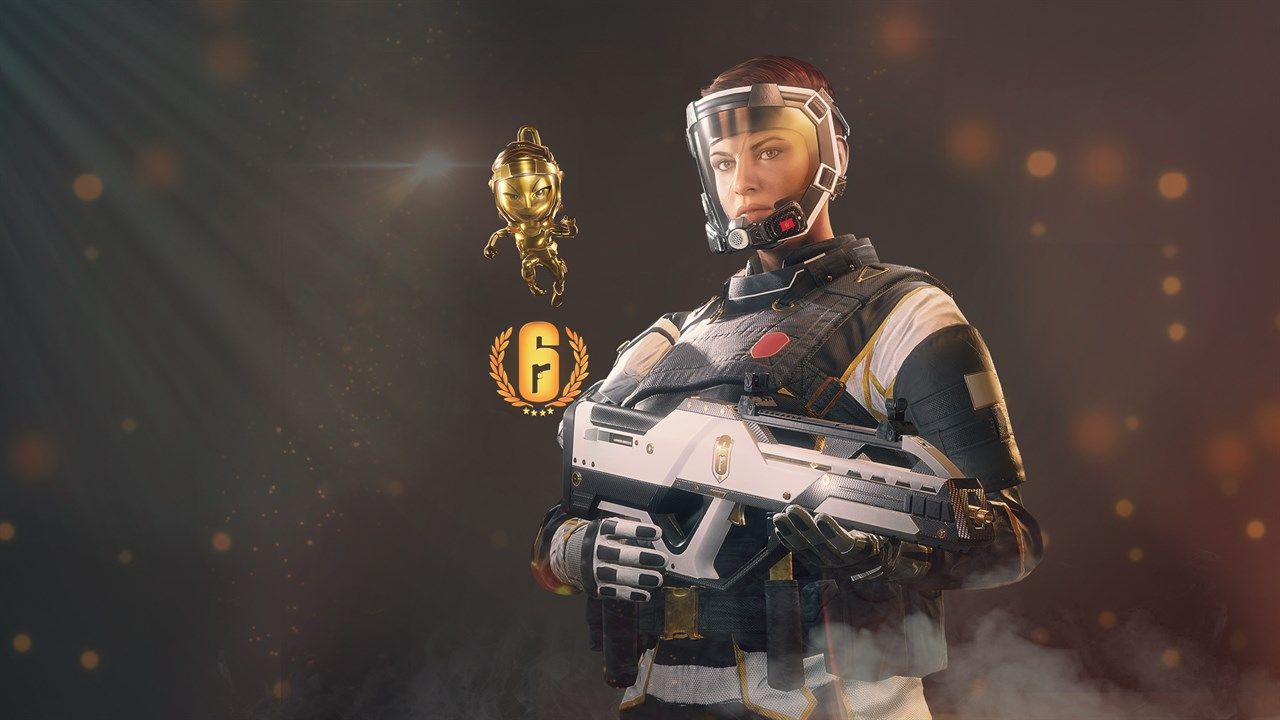 FINKA has a background in microbiology that made her an important component of the REACT team. While serving the Russian Spetsnaz, FINKA developed a nanobot-driven adrenalin boost to cure her medical condition. Now FINKA shares her creation with the rest of her team.

Lera “FINKA” Melnikov was born in the irradiated city of Gomel, Byelorussian SSR after Chernobyl. FINKA was diagnosed with a neuropathy that included slow muscle degeneration. She pushed herself to stay in peak condition to fight the condition but knew it wasn’t a permanent solution.

FINKA moved to study genetics, uncovering treatments for a variety of pathogens and neuropathies using self-dissolving nanites. She started wanting to help others as well, volunteering the nanobots to the Russian Special Forces. She served as a Red Beret as a Chemical Biological Radiological Nuclear specialist and then became a Spetsnaz CBRN Specialist on the Vympel Unit, using the nanobots to help her unit survive.

FINKA starts off with the SPEAR .308 assault rifle. 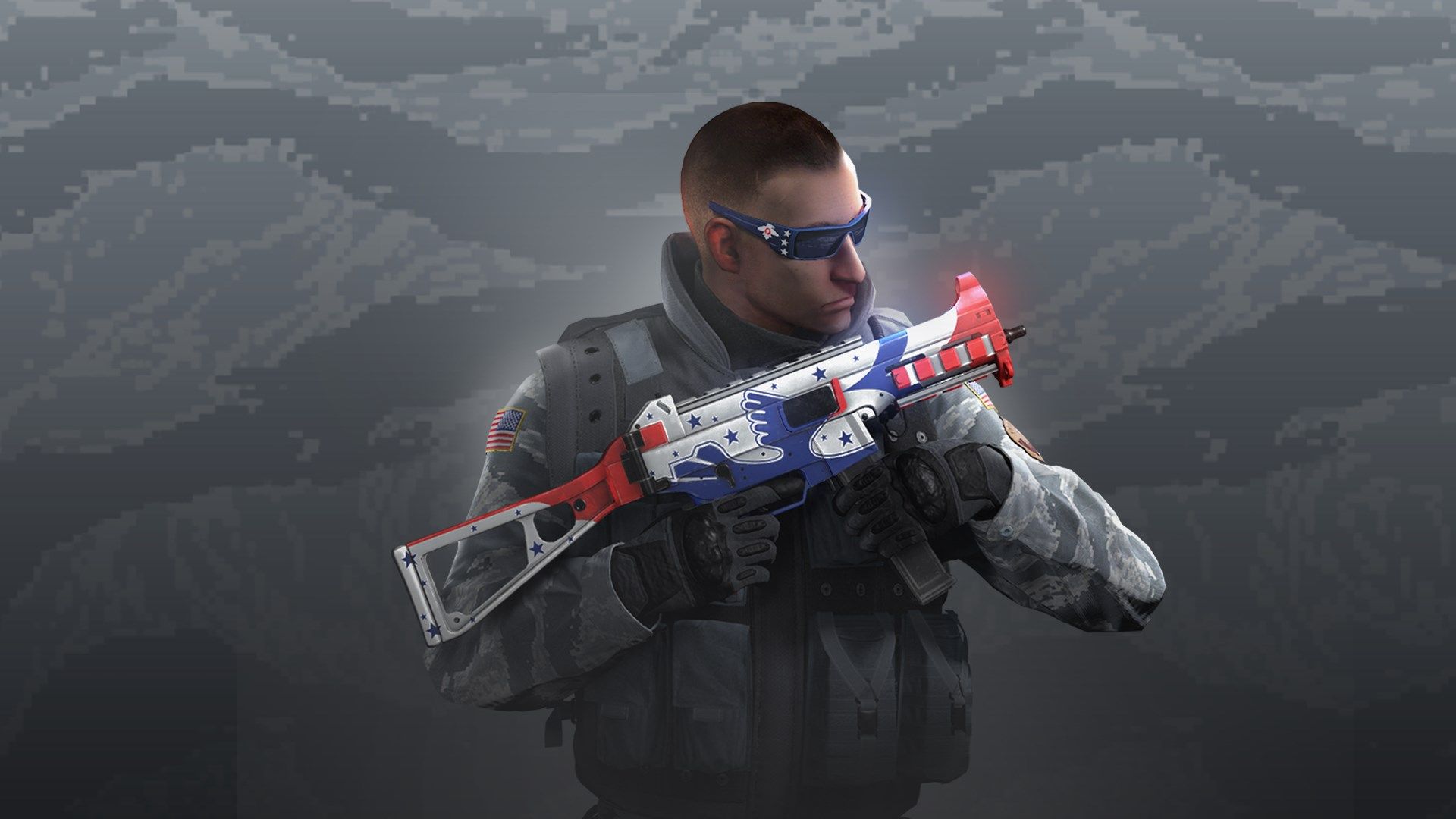 This operator has a background in FBI biometrics and analysis, making him an operator that everyone wants on their team during a search and eliminate operation.

Jack “PULSE” Estrada was born to a pilot and senior intelligence officer at the Seymore Johnson Air Force Base in North Carolina. He had a focus on forensic science and biochemistry, making him a perfect fit for the FBI. He became their youngest intern.

He was soon recruited to the FBI SWAT, noted for his emotional intelligence. This led him to join the FBI’s Hostage Rescue Team where he excelled at crisis management and negotiation tactics. PULSE also became fascinated with microscopic variances of identity, able to recognize micro-expressions and speech patterns.

PULSE has an M1014 shotgun to blast Archaeans.

Want to know more about Rainbow Six Extraction? Here is the release date, gameplay, modes, and everything else about the new game.