These are all the R6 Share skins in Rainbow Six Siege

Want to represent your favorite esports teams? Have a look at this article.

The Rainbow Six Siege esports scene takes a big part in the game’s future. With the launch of Operation Grim Sky, the first esports teams’ skins made their entrance in the game, including teams such as Rogue, G2 Esports, FaZe Clan, or Team Liquid.

Back then, this was known as the Pilot Program. In 2020, it was rebranded as R6 Share. Keep on reading for more information on these special bundles and skins.

R6 Share is a Ubisoft program launched to support the esports scene. Its objective is to economically support some of the best teams in the world, while also helping at the build of the biggest Siege competitions: the Six Invitational and the Six Major.

It initially included 42 esports teams since Cloud9 left the scene in July. Some weeks later, the organization's skins were removed from the store.

R6 Share also includes special items themed around the professional leagues around the globe, including the European League, the North American League, the LATAM Leagues, and the APAC Leagues.

Teams are divided into three categories, Tier 1, 2, and 3. These tiers are decided on the presence or importance of the teams in the Siege ecosystem. This means that an organization like G2 Esports or Fnatic — who not only compete in the scene but also create Siege content on a regular basis — will be in a higher tier than Team Empire. This organization has great results in Siege but they do not create that much Siege content.

Each category rewards teams with the following:

First of all, we must make something clear: R6 Share items can only be unlocked with R6 Credits.

R6 Share bundles for Tier 1 organizations are the most expensive ones since they include the most in-game items. These cost 1680 R6 Credits. Meanwhile, Tier 2 bundles cost 720 R6 Credits.

However, you can purchase items individually, regardless of the team’s tier. So, here are the prices for individual in-game items:

As we mentioned before, there are also R6 Share skins themed around the team’s tournaments. The individual price for these is 960 R6 Credits, while the full bundle costs 1920 R6 Credits.

Recently, Ubisoft launched a new set themed around the professional Siege leagues around the globe. 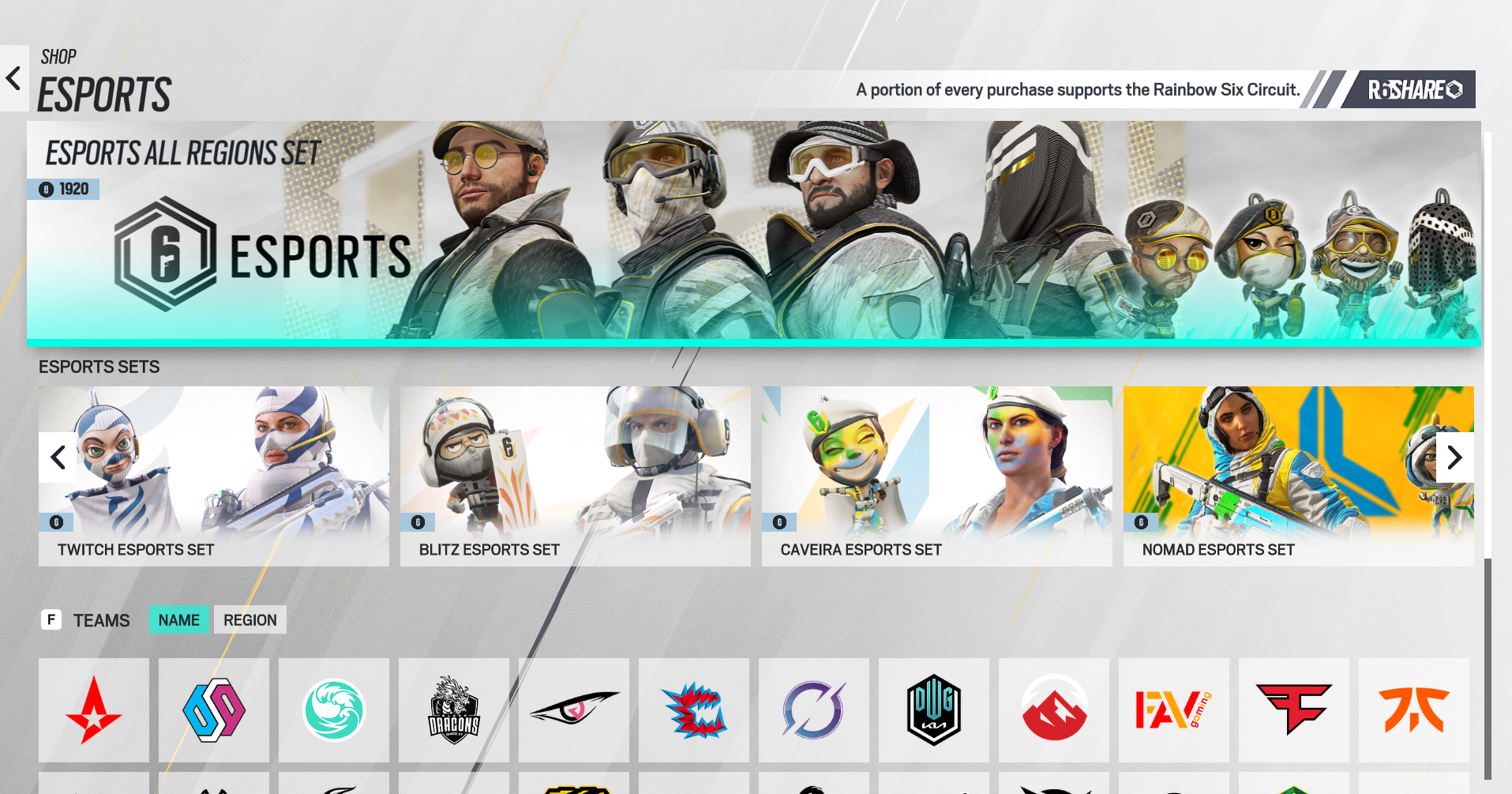 What bundles and skins are currently available in R6 Share?

Right now, this season's and last season's skins are available in the in-game store. Let's have a look at all of them, starting with Tier 1 skins and finishing with Tier 3.

Each bundle includes a uniform, headgear, weapon skin, and a charm.

Teams receive a weapon skin and a charm. It initially included the following organizations, plus Chaos Esports Club, Cloud9, eUnited, Giants Gaming,  and Tempo Storm. However, they left the scene — bringing their items along with them.

Note: Astralis picked up Disrupt Gaming and their skins are still in the game under the name of their new team, Astralis. However, the skins feature Disrupt's logo and colors. 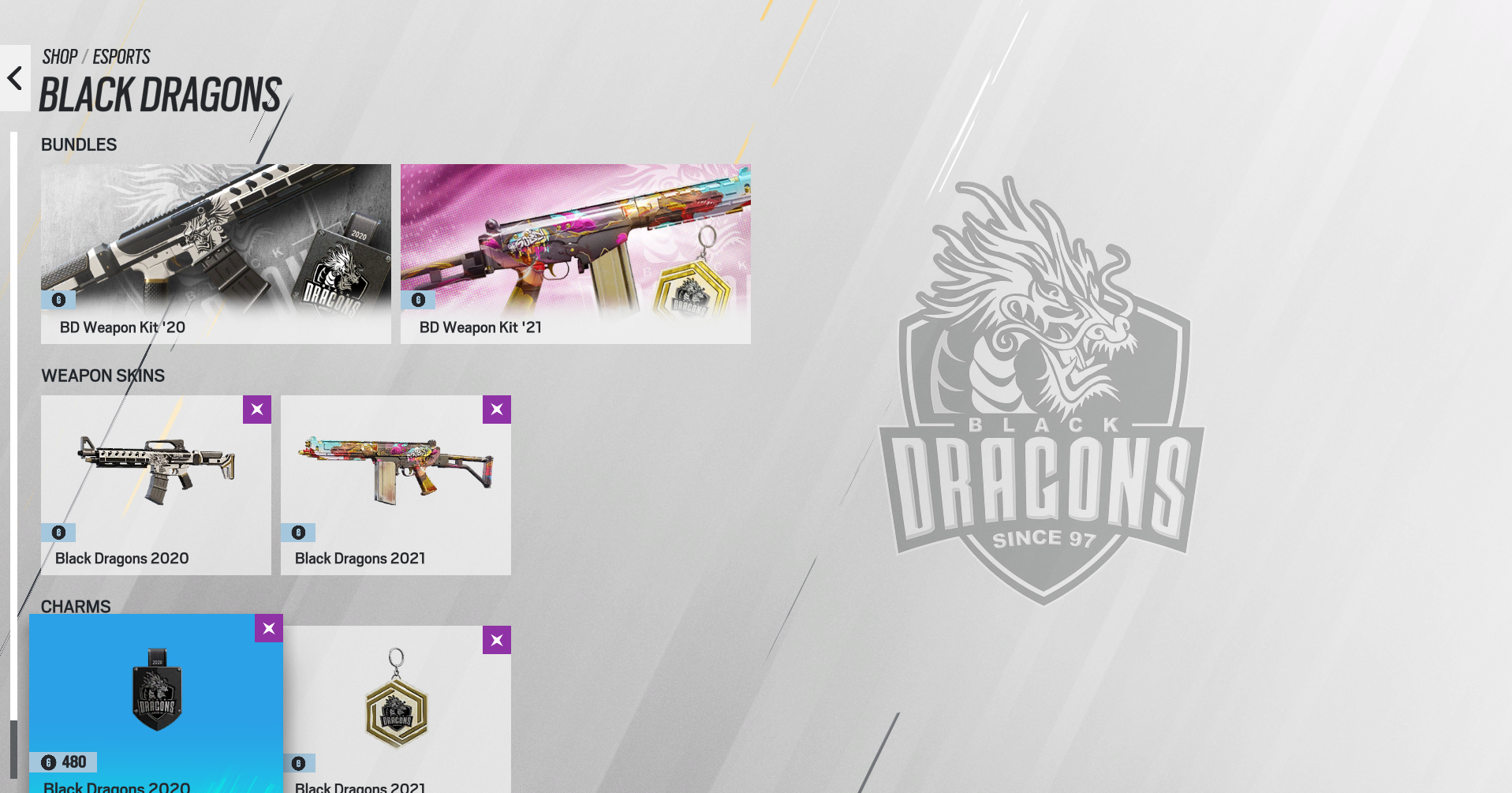 Tier 3 skins include only a weapon skin. It initially included 17 different teams, but some of them left the scene. In their place, newer organizations joined in their places, including Cowana Gaming, DWG KIA, Mirage, T1, The Chiefs, ORDER, XSET, and Wildcard Gaming. Note: QConfirm dropped its Siege roster on Nov. 19, so the skins will leave the in-game store soon. Aside from the team skins and bundles, each league has its own bundle. Alongside them, Siege frequently drops new Pro League bundles.

The esports sets can be found just above the teams' sets. If you move all to the right and click on View All, you will be able to check them out in one place. Esports skin are a great way to represent your favorite teams in-game. It's a unique way to support the esports scene and stand out in any match.