With the 2021 Global Rulebook now public, here's a rundown of all the new changes fo the 2021 season.

As well as the regional changes in formats and schedules explained in their individual articles (NA, EU, LATAM, and APAC), a number of changes to the global rules have also been introduced as of the start of the 2021 season.

Below is a summary of this rulebook as we have interpreted it, with the specific rule referenced in each case found in square brackets.

Starting with the biggest change, pro-tier organisations can now also sign a second roster to compete in national tournaments as well as their main team [4.3]. This comes after Giants Gaming and Electrify were both forced to drop their Spainish National rosters in order to join the APAC League last year due to conflict of interest concerns, despite the two teams not having any realistic chance of meeting.

The main advantage of having a secondary roster is that two players from the academy roster can be listed as substitutes for the main lineup.

This would be particularly helpful in reducing the sudden need for stand-ins, as seen in the situations with Spacestation Gaming, Wildcard Gaming, and T1 (who are currently all playing with their coaches substituted in) and makes holding long-term substitutes a more viable option for teams.

This rule has already been taken advantage of by Black Dragons, who picked up Pablo "resetz" Oliveira as their main team's substitute and as a starting player for an academy roster.

This bodes well for a second attempt at official roster rules around secondary lineups in Rainbow Six.

Last year, LATAM organisations had been allowed to hold a second roster under altered rules, but only FURIA had taken advantage of the stipulation, with the organisation's founder afterwards expressing his disappointment at the attempt:

Unfortunately, the R6S (sic) is not so friendly to academy projects yet, due to the restrictions in the number of players, switches, etc. but I believe Ubisoft has an awareness of this and will create a better environment for new academy teams in the future.

As such, it seems that Ubisoft has listened to the complaints and has managed to draw in a lot more names in LATAM since.

While not confirmed, the new academy rules also likely give the EU and APAC teams a way to avoid playing in national leagues if they so wish.

At the moment, all organisations involved in the R6Share program must compete in a relevant national tournament (if there is one), which has led to complaints from a number of pro-tier players.

Finally, an organisation can only participate in one region at a time, meaning that Giants Gaming cannot resign its Spain Nationals roster.

While timeouts have already been seen over the last week and were used extensively in the LATAM region in 2020, they are new to online games globally for 2021 [5.1.4]. The exact process for timeouts is as follows:

Getting the extra discussion time as well as input from a coach is obviously very beneficial in key rounds and can make the difference in games.

Firstly, there won't be a transfer period after the November Major in 2021 or 2022 [4.5.3], just like in 2020. This is designed to stop SI-qualified rosters from dropping players before the event, but also arguably hurts other rosters as teams are forced to keep the same lineup for seven whole months (from August to March).

Last year, this "missing" transfer period led to supr forming the suprSoniqs, Melon Cat (ex-Noble) being disqualified from the SI Qualifiers, and a number of NACL teams being told they were to be disqualified from the Challenger League, as they all had hoped to make transfers during this break -- transfers that were not allowed.

For example, SI21 had initially been planned to end on February 21st, with the transfer period starting on the 22nd.

With this in mind, this is likely when the upcoming Majors will take place:

Obviously, this is in no way confirmed and can be changed at any point by Ubisoft.

Most notable from the NA-specific rulebook (seen here) is that relegations will apparently happen as per normal [6.9].

This means that we'll see the ninth-place team as of Stage 3 face the NA Challenger League victor in a Best-of-Five maps relegation playoff, with the victor being invited to the 2022 NA League Season.

This is somewhat of a surprise, as the NA League currently has only nine teams compared to the planned 10.

When Europe needed to get from eight to ten teams after Season 11 and when the Mexican Championship wanted to go from seven to eight teams before the 2021 season, both leagues had simply auto-promoted the Challenger League winners, rather than making them play a relegation matchup.

It is possible that instead, Ubisoft will offer an applicable organisation the 10th license spot to pick up a viable roster for the NAL season without the need for qualification as seen with beastcoast, XSET, and Mirage this year. 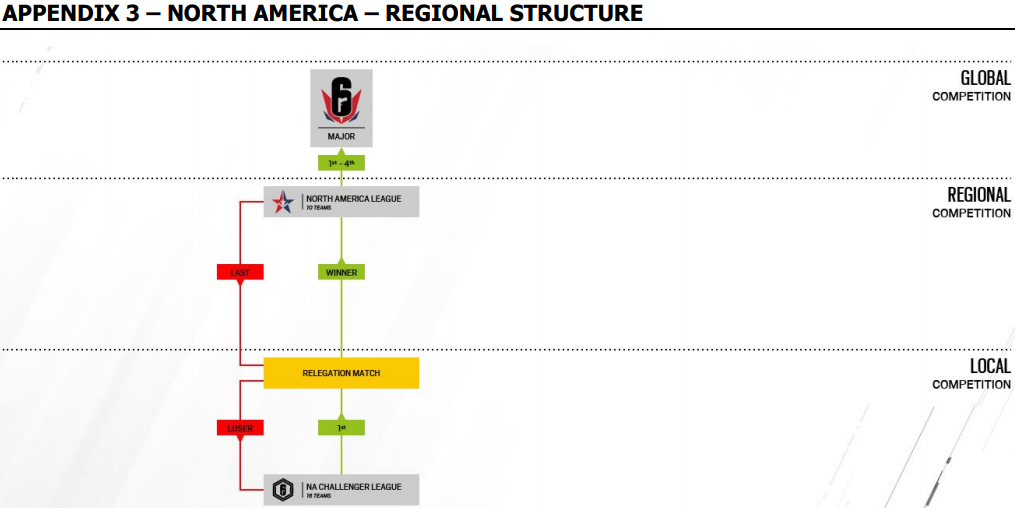 The updated 2021 LATAM-specific rulebook is not yet public. However, just like last year, Mexico will offer its CL victors an auto-promotion to the Mexican League, with the relegation game between the last-placed MXC roster and the MXCL runner-up.

This is because the Mexican Championship has kicked off with just seven teams rather than the planned eight, for the second year running, following the permanent ban of Estral Esports this year. 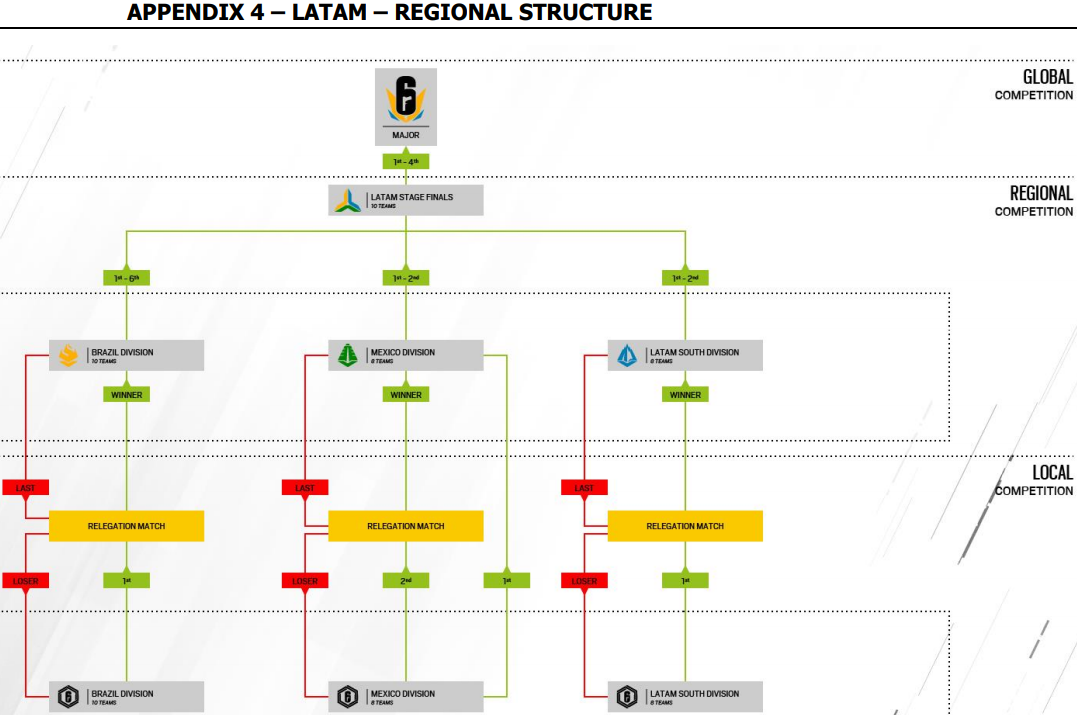 Most interesting about the LATAM rulebook would be how the region handles the international addition of timeouts and academy rosters, as LATAM teams had both these abilities in the 2020 season already.

Timeouts in the LATAM region allowed teams to call two per map -- once per half -- rather than the single time the new global rules allow. Academy rosters meanwhile came with an added NBA-style draft system which was not used once during the 2020 Season and allowed the secondary roster to compete in the Challenger League which the new international rules don't allow.

Presumably, the LATAM rules will change to match the international rules, but this is currently unclear.

Europe sees no pro-tier changes with the format (Bo1 round-robin), the number of teams, or the relegation format. Only the schedule has seen a change, as we've seen with the two already-completed play days. The only major changes come in the Challenger League, in which an additional four teams can qualify for via the Open Qualifiers.

This, along with MnM, Chaos, nine national league victors, and another open qualifier team, creates a 16-team tournament. These 16 will be split up into four round-robin groups. The top two in each group qualify for the double-elimination bracket, in which the EUCL victor will be crowned.

This will, however, not take place until Stage 3, with the national leagues taking place until then. 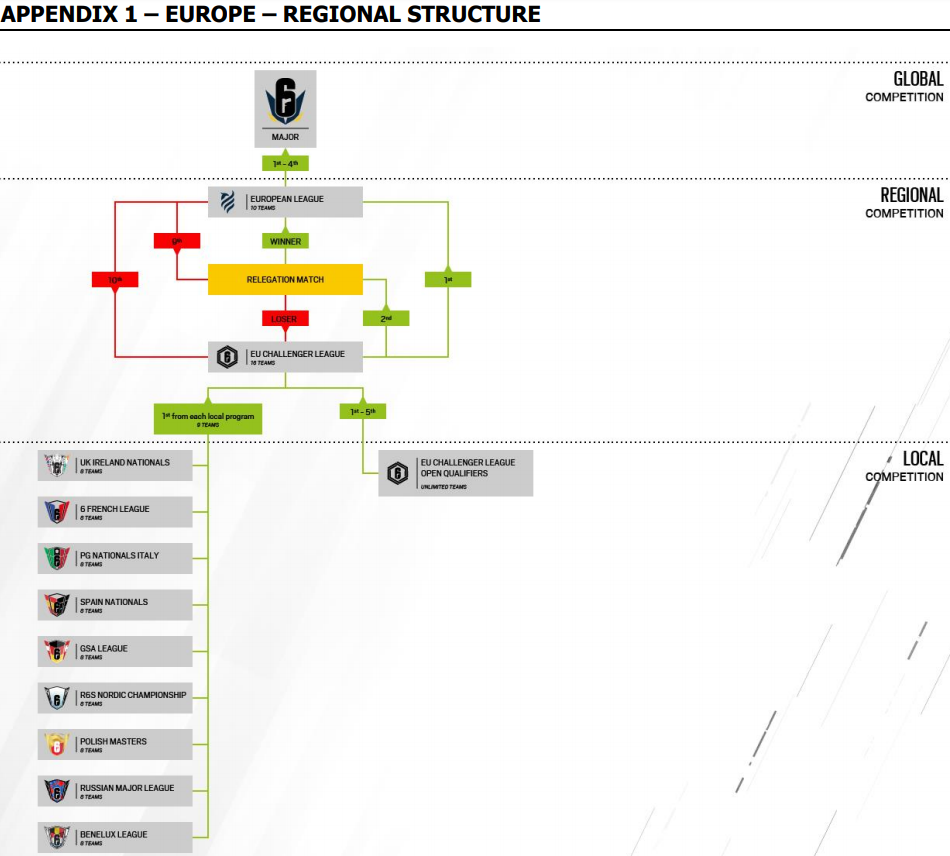 Finally, we have APAC which had an entire restructuring of the region to split the teams into two roughly-equal North and South leagues, which is explained here.

In addition to this, a very minor change has happened, as the South Asian region has expanded to add in Bhutan and the Maldives [2.1]. This has already been taken advantage of, as the Maldivian player of Spideytime was just two maps away from qualifying to the South Asia Playoffs during last weekend's open qualifiers.

Most interestingly, however, is that the global rulebook has no explanation of how the relegation process will work, with it simply stating that:

Promotion and relegation mechanisms between the [APAC North Division and
the Japan Nationals and South Korea Nationals /  APAC South League and the Oceanic nationals, the Oceanic Challengers and South East Asia Championship] will be shared later in the season.

Last season's APAC relegation format was one of the most confusing formats in Rainbow Six esports history, so the new APAC re-organization leading this to change is undeniably a good thing.

Finally, this stage will see an extra game between the APAC North and South winners to crown the Stage 1 APAC Champions.

Usually, these two teams would automatically qualify for the Six Major, but with the Major being replaced with the Six Invitational, an overall APAC winner is needed to decide who gets the biggest prize pool cut and the most SI Points.

This game will take place the same weekend as the APAC Playoffs, between teams placed third to sixth in North and South and first and second in South Asia. 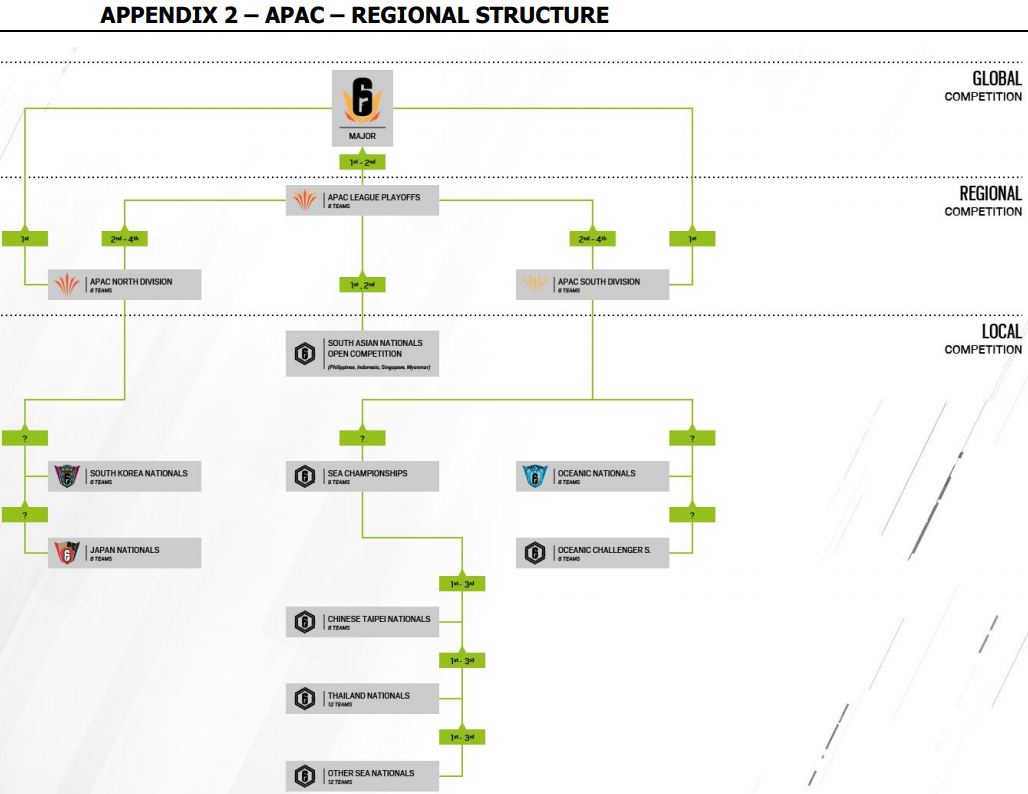 These rules will officially run throughout the 2021 season, but can be edited by Ubisoft whenever they want.

We have already seen four orgs take advantage of the academy rules and a number of teams call timeouts making these additions important ones, and it is possible that more will follow.

Keep an eye out here at SiegeGG for any future news to come.