Statistics aren't the whole story, but they help us understand what we see better. Here are some of the most interesting stats looking at the Group C teams at the upcoming Six Sweden Major.

Next week, the Six Sweden Major will see the top four teams in each region compete for the global title. The tournament is split up into two parts, with the group stage taking place from Monday to Wednesday, before the top two teams from each group progress to the three-day playoffs over the weekend.

Following our prior looks into Group A and B, let’s take a look at the numbers that will drive Group C’s games starting on Monday.

On paper, Group C might be the hardest, as it includes both EUL’s winner BDS as well as the joint-top seed in APAC of iG. As well as this, while NiP is technically the fourth-seeded LATAM roster behind FURIA, they effectively finished the CES as joint-third seeds and do carry some weight as the reigning world champions.

This should set up a close tournament; while BDS and NiP once again come in as likely favourites, there is a chance for upsets.

While Soniqs will be relishing this opportunity to finally find global success after a fairly strong domestic year, iG’s chances have been hit by the highly likely possibility that their star player Jeremy "HysteRiX" Tan will not be attending the event. Should that be the case, team coach Ellis "GiG" Hindle will fill in. 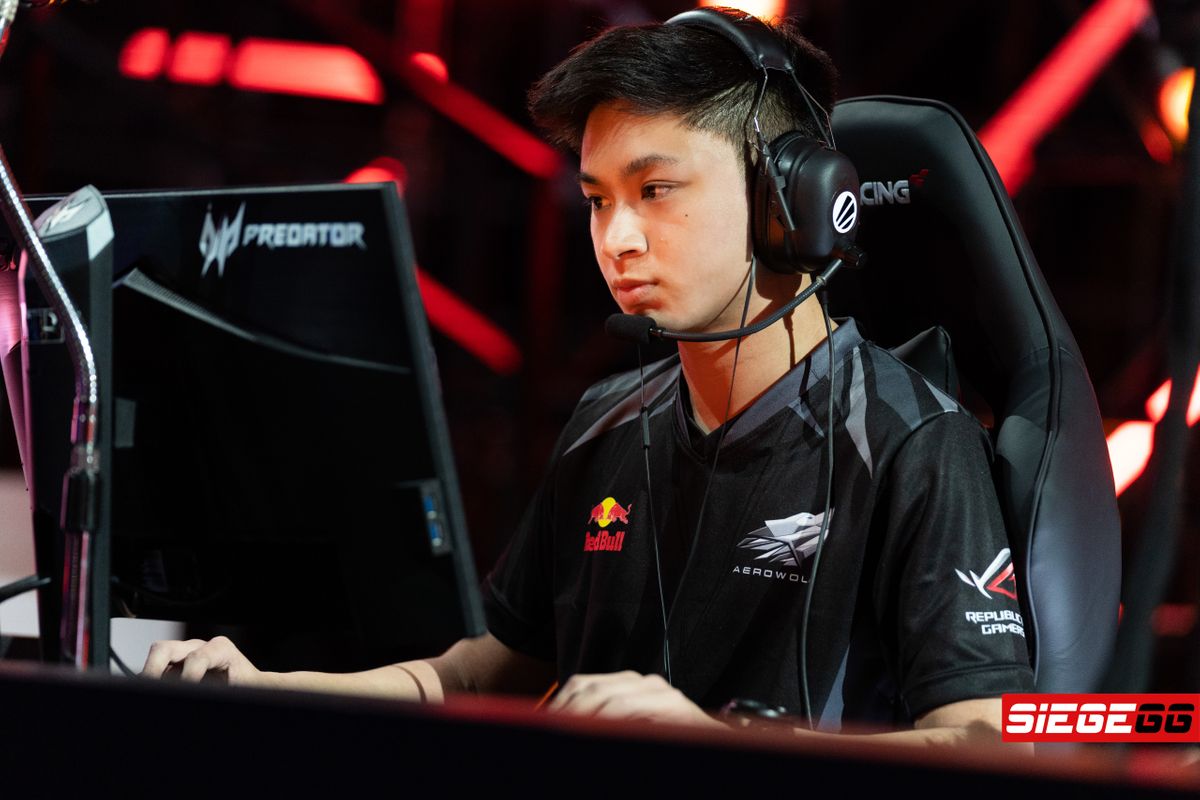 At the prior Mexico Major, all four of these teams were present, but Soniqs finished in last place, while only BDS escaped the group stage to finish in the top four overall.

This event also saw BDS and the Soniqs in the same group, leading to 7-1, 7-3 head-to-head result to BDS. BDS, iG (then Giants), and NiP also played each other at the 2021 Six Invitational, where the groups saw NiP beat Giants 7-4. NiP then took down BDS 2-1 in the quarter-final on their way to securing the title.

Finally, to cap off the head-to-heads, NiP also beat BDS 2-1 at the SI20 lower-bracket semifinals, making their group stage meeting here somewhat of a grudge match for BDS.

Starting with NiP, they had a truly awful BR6 stage, finishing in ninth place with a 1-2-1-5 record. They only managed to qualify for the Elite Six Cup playoffs due to the somewhat unfair way LATAM counted their points. The stats reflect this, as "Julio" Giacomelli led the team on a low 1.03 SiegeGG Rating, while the team’s Iana player Gabriel "pino" Fernandes had a negative kill-death spread.

On the regional stage, NiP then stepped up, beating 9z Team 7-2, Fenix 7-3, Team oNe 7-5 and Team Liquid 7-3, 7-2 to reach this Major. While Murilo "Muzi" Moscatelli jumped to a much more respectable 1.20 Rating, the biggest change came from the team captain Gustavo "Psycho" Rigal, who went from a record-setting low 4-20 to a still-not-great, but more acceptable, 12-16 entry record.

This, therefore, raises questions about their BR6 results; were they actually struggling or just hiding strats? Their Sweden Major campaign likely hinges on that question.

From the bottom seed to the top one, BDS’ season once again hinged on Europe’s top player Stéphane "Shaiiko" Lebleu, who will undoubtedly be the player to watch in this group. During the most recent meeting between BDS and NiP in BDS’ home of France, it was NiP’s ability to shut down Shaiiko (he finished with a 0.66 Rating) that led to their victory. It’s something that’s extremely hard to accomplish, but somewhat necessary to best the French juggernauts.

Looking further down, Loïc "BriD" Chongthep once again excelled during Stage 3, as he continues to build a strong case for himself to be the best support player in the world.

With these two players backed up by three well-performing teammates, it’s somewhat surprising that BDS has never played in a tier-one grand final. After missing out on this chance by a single round in Mexico, they know they have what it takes and definitely should be seen as one of the favourites for this Major. 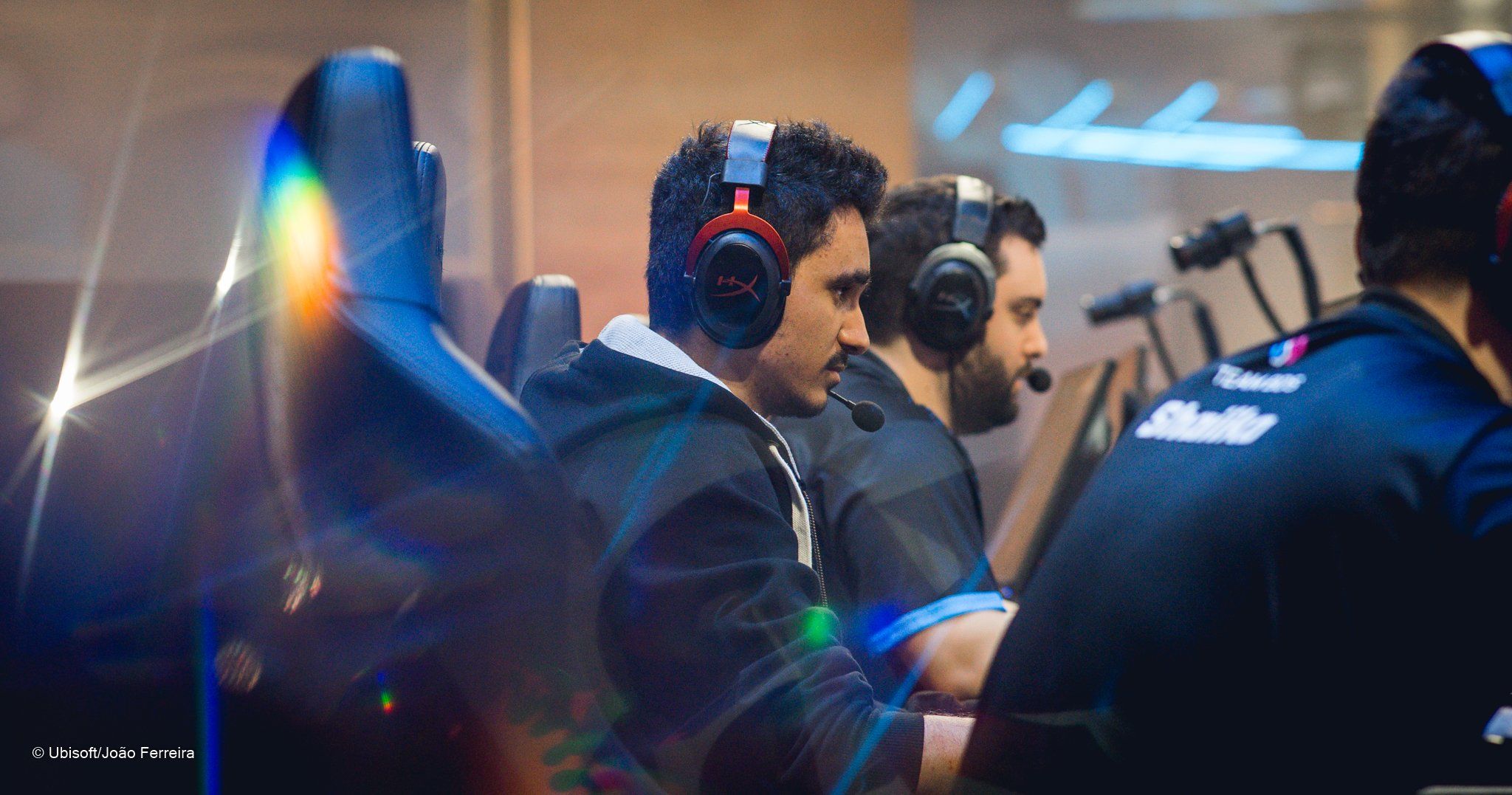 Onto Soniqs, there are two things that standout from this roster. First, there’s Seth "supr" Hoffman’s 0.64 Rating, which is not only the lowest of any player at this event, but is also lower than any player competing across the four other pro-tier leagues. Second: how little his low Rating matters.

While a performance like this would usually derail the whole team, the Soniqs have been arguably the best team in the NAL this season, as they consistently stayed in the top four. Unlike their main competitors SSG, they have also not spent most of the year changing players. As a team captain and support player, supr’s clearly playing his part, even if the stats aren’t showing it. He allows the trio of Richie "Rexen" Coronado, Pablo "Gryxr" Rebeil, and Evan "Kanzen" Bushore to frag out to a degree they were never close to on eUnited without him.

Finally, we have Invictus Gaming, who are going to struggle even more than usual if they don’t have HysteRiX, no matter how well GiG plays. Historically, HysteRiX has been one of the players to watch in the team, finishing Stage 1, SI21, SI20 and the Season 10 Finals as the team’s top player, before dropping below Glen "Lunarmetal" Suryasaputra for Stage 2.

Most recently, he dropped down to third place in the team, below the main planter and hard breach player Jordan "Jrdn" Cheng, who had a quite a jump in improvement from his Stage 2 0.81 Rating. 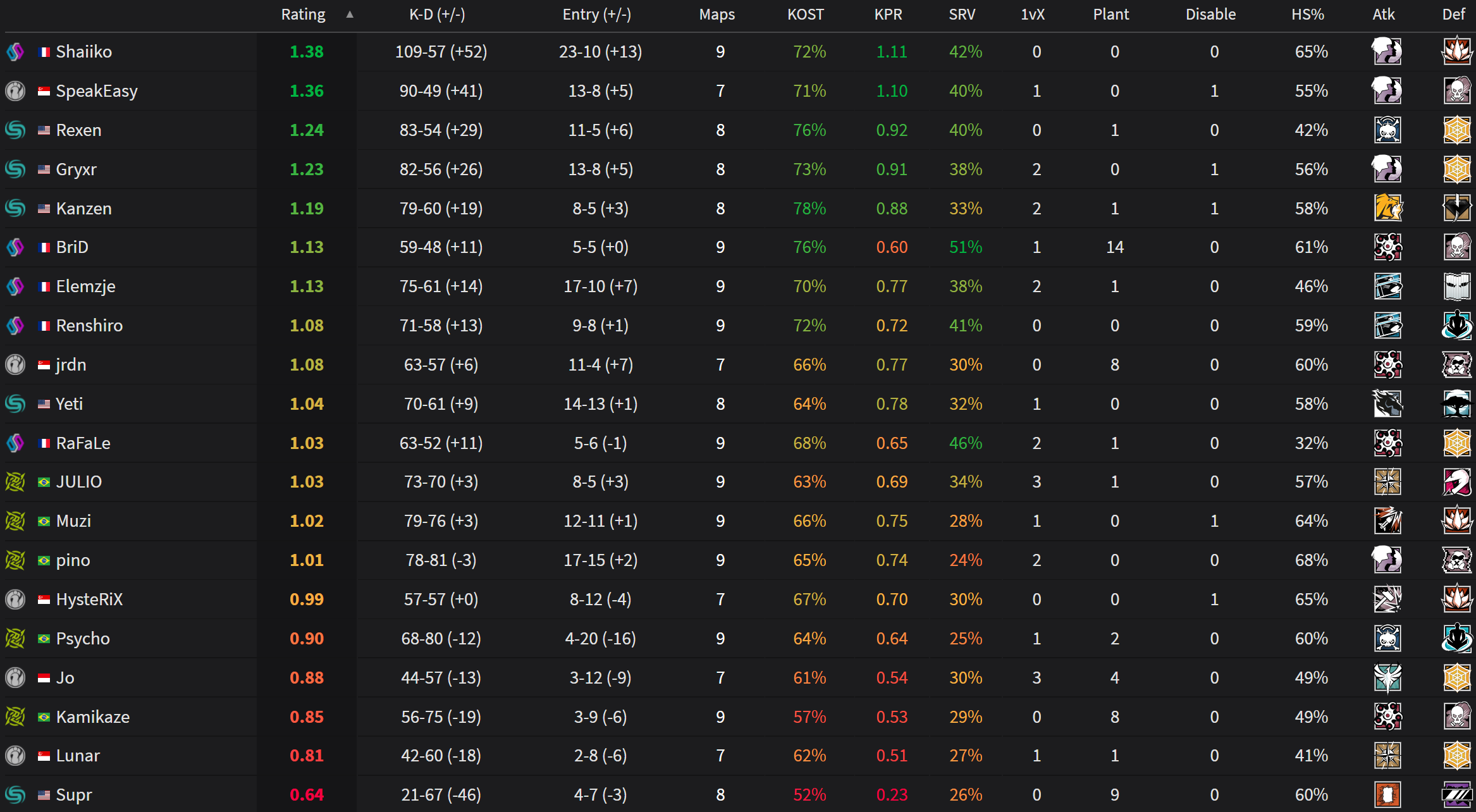 As the only team across all five pro-tier leagues to end Stage 3 without a loss, Team BDS has good win percentages across all their maps. They managed to dominate their opponent no matter the map.

This means it’s hard to judge exactly where their strengths lie, as BDS must have certain favourite maps. But when they’re winning no matter where they go, it’s hard to pick out where.

BDS’ 8-7 on Oregon was, however, their weakest showing as the worst team in the league, Heroic, took them all the way to the brink of a loss. While it likely didn’t attract BDS’ full attention, the 6 French League Final also saw BDS lose to Vitality on both Chalet and Oregon. Cracks can be seen on the latter map.

Despite winning it three times in Mexico, Kafe hasn’t been played by them this stage, as it was consistently banned against them. Finally, Villa drew a 63.6% ban (the same rate as Oregon) with their only pro-tier matchup on the map coming in their 7-3 Mexico Major win against the Soniqs.

Invictus played just seven maps during Stage 3, four of which were on Kafe. Teams kept on taking them to Kafe, as iG were showing weakness here, with their results being 8-6, 3-7, 4-7, 8-7. Just two overtime wins in four attempts means this is not really a map they can rely on when going against the likes of BDS, meaning fans will have to hope that they have a lot prepared on the four maps they didn’t show off.

Across these four, they lost Coastline twice against Liquid and the Knights in Stage 2, lost Clubhouse three out of the six times played (including twice in Mexico), and they haven’t played Chalet since Stage 1, when they lost it twice also. Finally, with Bank joining the map pool this Stage, they have yet to play it at all in the top flight. Their only attempts at it have been in the third-tier Operation League.

While they probably do have a lot ready on these maps, the team has likely been spending the last few days getting GiG meshing well into the team as a player, limiting the amount of time they had to sure up their map pool.

As with iG, we have also only seen three maps during Stage 3 from the Soniqs; Coastline, Clubhouse, and Chalet. These three don’t overlap with iG at all, which should make a particularly interesting game when they meet on Tuesday.

While on paper, Coastline looks like a problem for the Soniqs, their one win did come against SSG, which was SSG’s only defeat of the stage. On the other hand, they also lost the map 3-7 against XSET, the bottom-placed roster, making it pretty hard to judge how they’ll fare on the map in Sweden based on available information.

Looking at their missing maps, Soniqs haven’t won any of these maps since Stage 1 and haven’t played Kafe since last year. As with iG, there’s a lot of information here that we’re missing but with six best-of-ones followed by a possible best-of-three map playoff game, it’s unlikely they can avoid these maps throughout the tournament.

Finally for NiP, while they have played the most maps out of any of these four teams, it’s somewhat hard to take these numbers as legitimate figures considering their massive u-turn in performance from the BR6 to CES tournaments. Nevertheless, here are their map stats for the last three months.

Even when looking at just their CES results, NiP still played every map except for Oregon meaning we do have a look at both versions of NiP well. Across their four prior head-to-heads with their Group C counterparts, NiP played three maps: Coastline, Bank, and Clubhouse. Those three currently sit as their most played map and their only two maps with a flawless record, respectively.

With opening games on Monday against iG and the Soniqs, we’ll very quickly get an idea at which NiP is the real NiP, but it’s hard to judge right now. 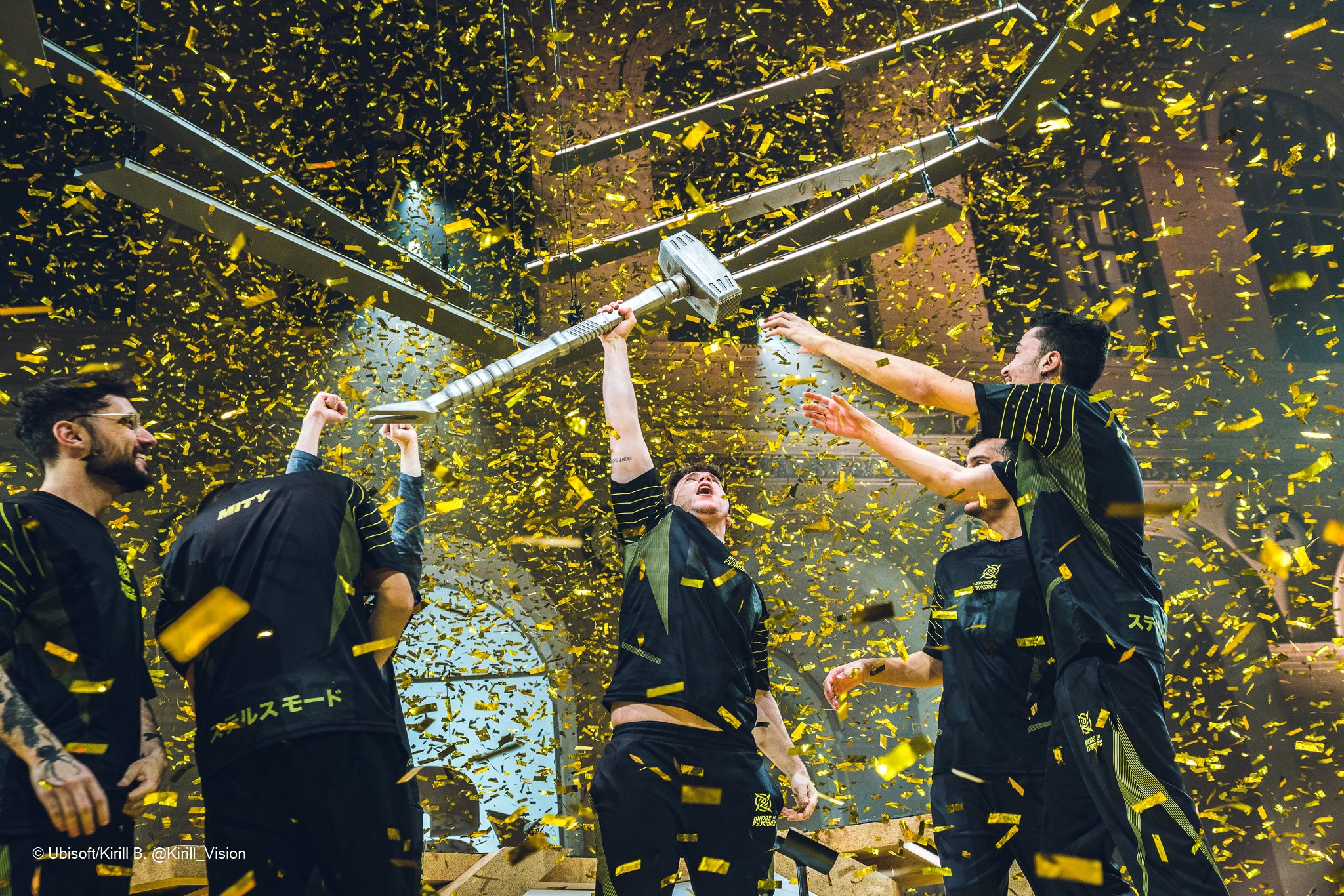 In summary, we have two teams that have only shown a very small map pool and two whose played maps don’t really tell us a lot due to particularly bad or good domestic performances; a perfect recipe for some upsets.

As ever, SiegeGG will be covering this tournament in full when it starts next week. For now, be sure to check out our pre-event coverage which includes interviews with the participating teams.