In a somewhat surprising result, Disrupt Gaming has been crowned the winner of the Pro-Am tournament after defeating DZ in straight maps.

The NSGxDZ Pro-Am tournament took place this weekend, with an initial group stage on Thursday followed by a three-day double-elimination bracket. This tournament (which can be read about here) invited 20 of the top teams in NA to compete ,including all nine NAL rosters making it a huge first look at the teams before the NA League starts in a week's time.

The 20 teams were split into five GSL-style groups, of which the top two in each progressed onwards to the playoffs.

Most notable out of these groups saw TSM be first-rounded in straight maps against the Tier-Three lineups of Neo and MystiC as they brought out Frost and Amaru, and put Merc on Thermite.

Elsewhere, Parabellum -- the SI 2021 qualified ex-Altiora roster -- came within two rounds of taking down SSG in a 8-7, 6-8, 5-7 result showing they can compete at a higher level than many expected while the CCS champions of Arial Arise took down the Soniqs in a Best-of-One, before Soniqs won 2-0 in the rematch.

In the end, eight out of nine of the NAL teams made it out of the groups, joined by Parabellum and MystiC. The one somewhat disappointment came in No Visa Esports -- which includes the core of Evil Geniuses in nvK, Yung, and Spades -- who went out in straight maps against Disrupt and Soniqs. As most of the roster hasn't played competitive R6 in almost a year, this is somewhat expected.

Friday saw the first two rounds of the playoffs take place in both the winners' and losers' bracket, however, the losers' games weren't on-stream.

XSET vs Parabellum kickstarted the day as, after an impressive performance against SSG the ex-Altiora roster played in a rematch against XSET, who they had previously bested 2-1 during the Six Invitational qualifiers.

While Eskaa certainly impressed in this game, Parabellum saw themselves lose the first map 7-4 and go behind on Oregon 6-4, before a 1v1 by Luiz and a 1v2 by Eskaa took them into overtime. Here, six kills across the three rounds by Creators on Ash and Goyo ended the series in XSET's favour pushing them into the winner's quarters.

In the second play in-game, meanwhile, the one non-pro tier roster of MystiC was swept by Mirage in a very dominant 7-4, 7-2 scoreline. Both Parabellum and MystiC were then knocked out in the first round of the losers' bracket by Soniqs and Oxygen, respectively.

The upper quarter-finals themselves saw a number of close games including two upsets as Mirage took down the hosts of DarkZero and Disrupt defeated Oxygen.

Starting with DG vs OxG, this game was a real slog, with all three maps reaching at least 12 rounds in length. Map 1 saw three separate 1vX's by OxG's FoxA and Mark as well as their ex-teammate of Retro to push the map into overtime and to round 15. Here on the final round double-kills from J9O and Mark gave DG the defensive round and map win to go ahead 1-0.

This round turned out to be the decider, as OxG pulled it back on Coastline only to lose Oregon in another overtime result, 8-6. It was on this map that Yoggah really showed up with two quadruple-kills and two triple-kills on Goyo, Wamai and two on Ash, but this wasn't enough to take the win, with a triple-kill by Mark ending the series.

The second upset came between DZ and Mirage as the three ex-DZ members of Hotancold, Nyx and Guerra defeated their old roster, despite DZ's newest member of Nic,k having a standout performance on the Zofia/Jager role. The match was close, however (7-5, 1-7, 8-6), with the teams meeting again later in the event. 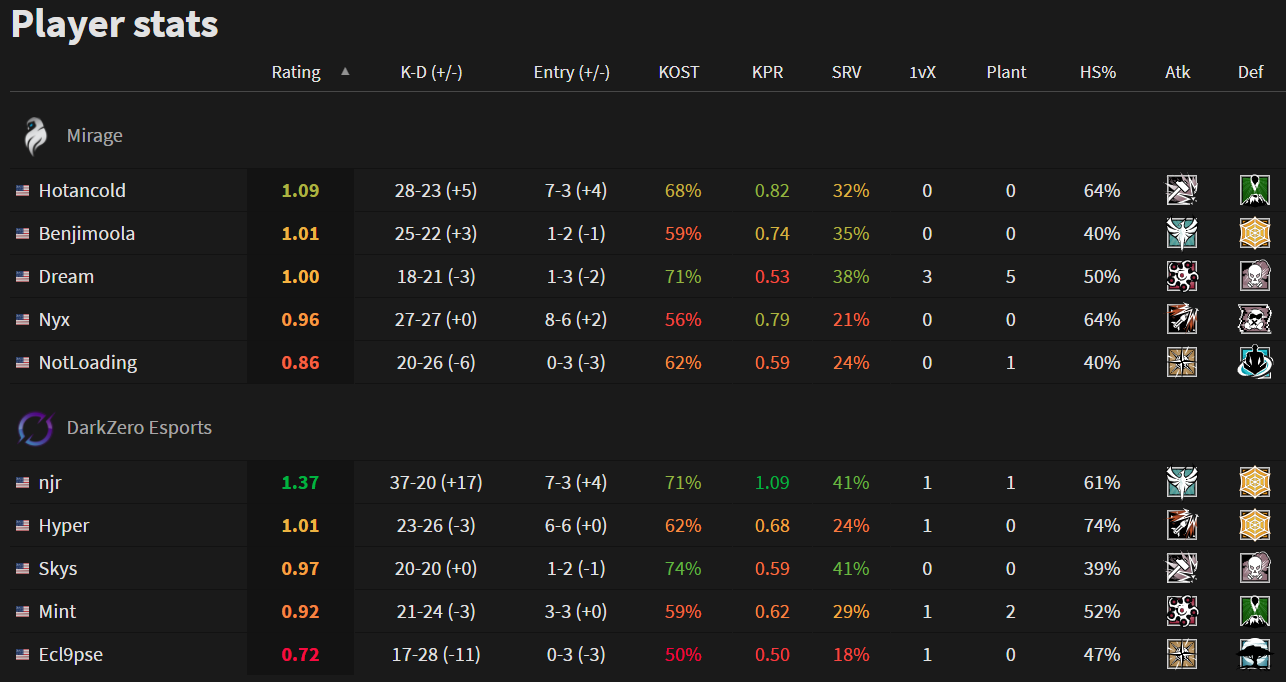 The remaining two quarter-final matches saw XSET defeat their rivals from Challenger League last year in beastcoast, 2-0, while SSG took down Soniqs in another very close game. Here on Map 3, a clutch by Luke in overtime led SSG to win 8-7 in what was SSG's first game since Canadian decided to retire.

Finally, in the losers bracket off-stream, DarkZero sent Soniqs home with a 7-2 win, while beastcoast recovered from their 2-0 loss with a 7-5 win over OxG.

XSET vs Disrupt began the day as Disrupt destroyed XSET on Coastline, 7-0, before a more reasonable win on Theme Park, 7-4. While XSET is a new team to the NAL, this was quite a shock result as Iconic alone secured more kills than Creators, Filthy and Buzzerss -- XSET's Jager, Ash and Zofia mains -- combined while playing Thatcher on attack.

While the second semi-final of Mirage vs SSG did go to three maps, none of these were as close as we'd seen in prior play days, as a 7-4 map win each on Coastline and Clubhouse was closed out with a second 7-0 victory of the day and SSG pulled no punches on Theme Park ahead of its exit from the map pool next week.

The game did, however, see Hotancold excel for the second game in a row, as he secured a 1.30 rating ahead of his closest teammate at 0.86. 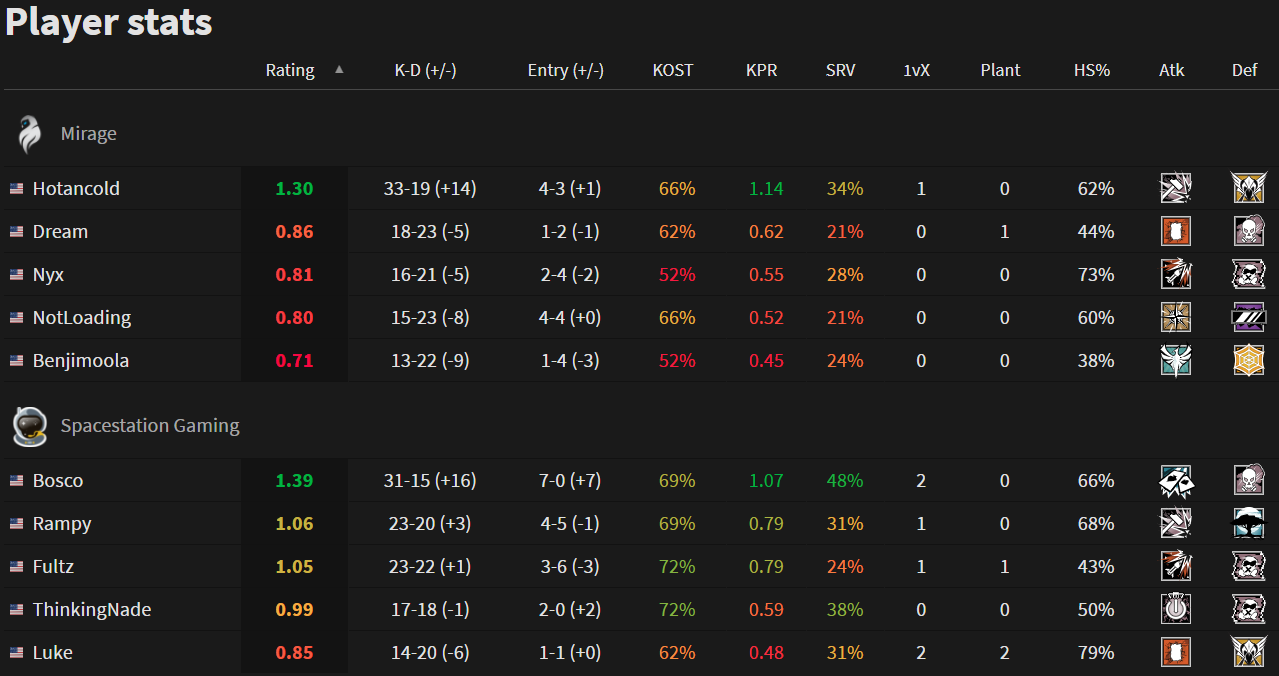 The final upper-bracket game, therefore saw Disrupt face SSG which was neck-and-neck throughout. For the fourth straight game for SSG, the game went to all three maps, but stopped short of overtime in each.

In Map 1, this was thanks to an opening triple-kill by Fultz on Iconic, Retro, and J9O to end a three-round come back from 6-2, while map two saw Shuttle win a 1v1 over ThinkingNade by the timer to take the map 7-4. Finally, Map 3 of Villa saw SSG's 3-3 defensive half lead them to defeat as Round 12 ended with Mark and Iconic puuling off a successful retake to defuse the defuser and win the map 7-5 to put DG in the grand-final.

In the lower bracket, meanwhile, DZ continued their run to knock out XSET (8-6), while beastcoast was forced to forfeit their match against mirage due to connection issues. This set up the rematch between Mirage and DarkZero in a Best-of-One on Oregon.

Mirage had defeated DZ on Oregon the day prior, 7-5, however, the tide flipped this time as Mirage only managed to take three rounds, one of which required a 1v3 quadruple-kill by NotLoading to win.

The final day saw just two games, SSG vs DZ in a Bo3, with the victor then facing Disrupt in a Bo5. 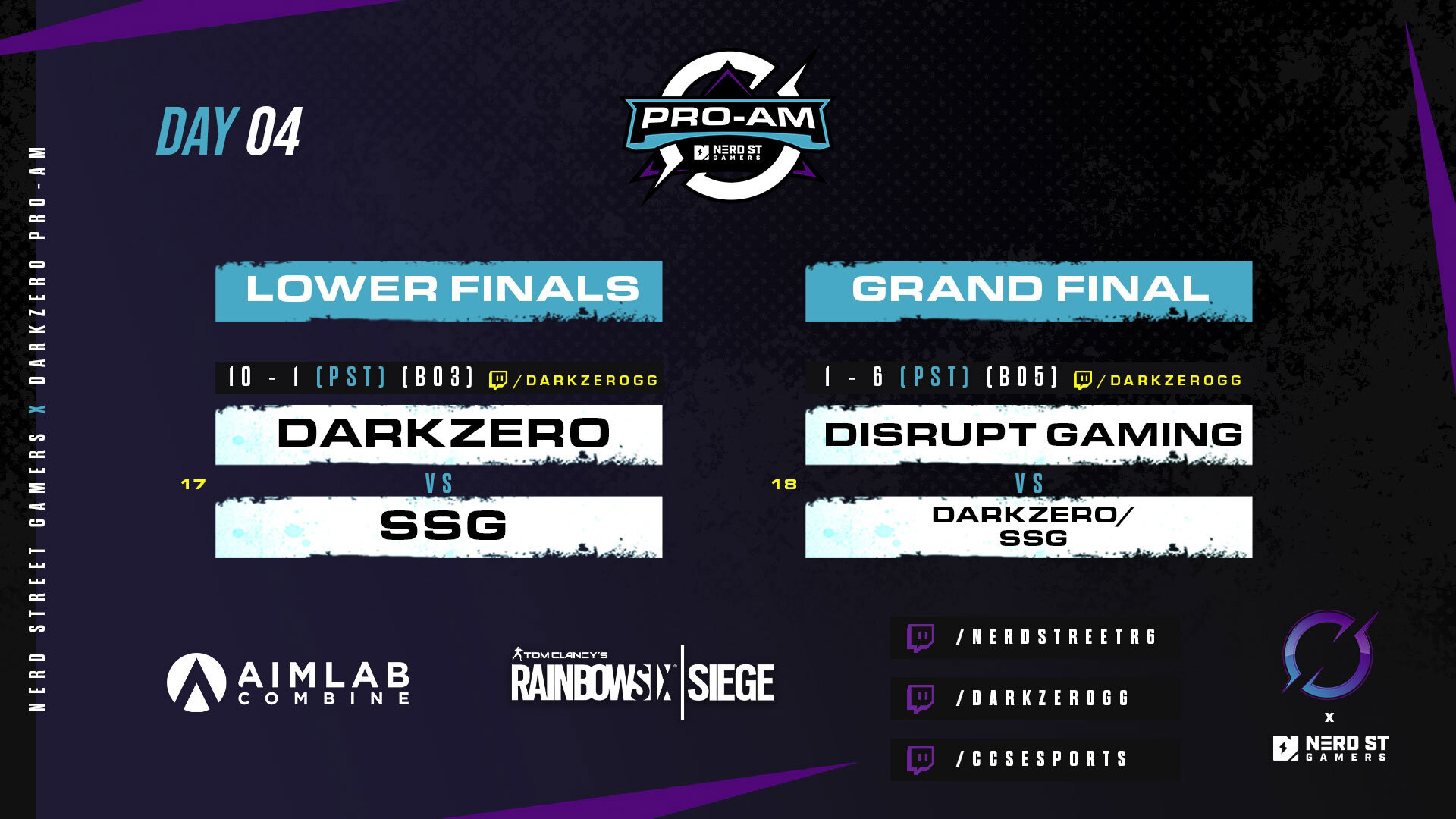 DarkZero vs Spacestation Gaming continued SSG's weekend of incredibly long games, as it once again went to three maps. Map 1 of Coastline saw DZ go ahead 5-2 only for SSG to mount a short-lived comeback mainly thanks to Fultz. Across three rounds on Ash, he secured seven kills, before Ecl9pse and Hyper managed to shut him down early on Rounds 11 and 12 to end the map 7-5.

Map 2 on Villa saw two rather standard 3-3 halves lead into an action-packed overtime. A triple-kill retake by Hyper on round 13 was responded to with double-kills by Rampy and Bosco to lead into Round 15. Here, finally, the map ended as Bosco secured a triple-kill of his own to shut down Hyper, Skys and Mint to win the round.

On Map 3, Oregon saw multi-kills all around with triple-kills coming out from Skys, Ecl9pse, Luke and two from Hyper while njr and Skys also secured four kills each. Despite this, it was a fairly even game with the scoreline being 4-4 before three added round wins in a row each thanks to a multi-kill by a DZ player. This gave DarkZero the map and series to lead into the grand-final.

A Best-of-Five after three long maps could have been draining for DarkZero should the final have dragged on for too long, but Disrupt were sure to put them down quickly in a remarkable 3-0 scoreline.

Map 1 of Theme Park was DG's from the start, with DZ's only defensive rounds being thanks to an early double kill and a 1vX from Ecl9pse. Moving to attack the rounds did tighten up with three 1v1s in a row from Retro, Hyper and Shuttle before a three-piece by Retro ended the map, 7-4.

Map two was much closer as Consulate went all the way to overtime, where early plants in a 4v3 and 5v4 situation both on the Garage objective gave both rounds to the attackers, before Shuttle clutched a 1v3 on round 15 to win the map by killing the planter and running from Nick and Skys.

Moving onto Villa, DZ now required a reverse sweep to win the game that would have meant they would play eight maps in a row across the day, which would be a colossal effort from the team.

DarkZero started on defense with a 3-3, with Skys saving the half thanks to a 1v2 over Shuttle and Retro. A triple kill by Mint put them in the lead on Round 7 before DG took advantage of their defensive advantage to win three in a row. Another 3k by Mint on Round 11 broke this streak, before DG closed out the series, 3-0, with a confident Round 12.

Disrupt's undefeated run against teams including DZ, SSG, XSET, and Oxygen, as well as topping Soniqs' group and defeating the ex-EG roster in No Visa Esports makes Disrupt a massive team to watch when the NAL kicks-off on March 24th.

This also comes after two major roster changes to the team and just a few days after Mark was announced on the roster, meaning the team likely still has room to grow.