What is the worst map in Rainbow Six Siege?

With over 20 maps in the game, we can't expect all of them to be perfect.

Rainbow Six Siege has some really good maps in the game, but some other maps just don't seem to work. After explaining what's our best map in Rainbow Six Siege, it's time to explore the other side of the coin.

Read more: Which operator should I include first in Rainbow Six Siege?

What is the worst map in Rainbow Six Siege?

Rainbow Six Siege's Tower is arguably the game's most delusional map. It was launched to the game with the release of Operation White Noise — Vigil's, Dokkaebi's, and Zofia's operation.

Set in South Korea, Tower introduced concepts the community had been asking for a long while. First, attackers respawned on the roof, having the chance to get into the building by rappeling from it. Second, it was a map with a very modern vibe, inspired by Seoul's Mok Myeok Tower.

Tower is possibly one of the most detailed maps in Rainbow Six Siege. It is full of easter eggs, and it even includes a hidden room that can only be located with a drone.

Unfortunately, it's just bad gameplay-wise. Tower is a very big, dark map. It is a breath of fresh air, style-wise but there's no way we are going to see this map in a competitive environment any time soon. Despite the dimensions of the map, it is very intuitive to play in Tower, which makes it a good map to play on Quick Match.

We appreciate the amount of detail put into the design of the map though; however, playing on Tower was never good news when it was part of the ranked map pool. It's cool to play it on Quick Match, not in a competitive environment. 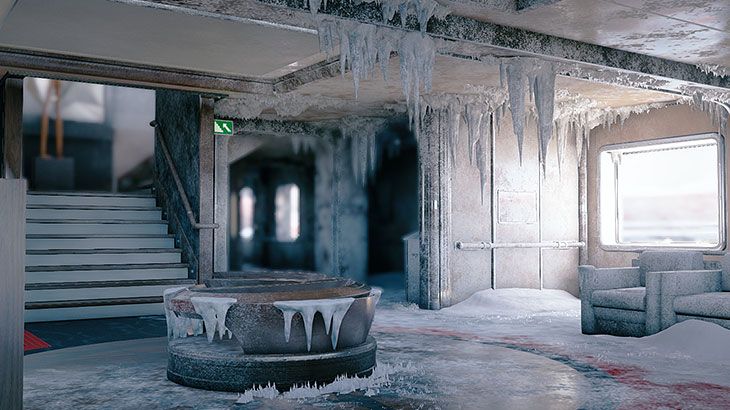 Other Rainbow Six Siege maps that give Tower a tough fight for this distinction are Yacht, Favela, and Barlett University.

Starting with Barlett University, this map isn't in any map rotation anymore. I guess that says it all. Big map with just two floors and no basement. You can still play it in Terrorist Hunt though, so feel free to explore it by yourself!

Yacht is another map people usually hate on a lot. It is incredibly big and it is full of windows. Bomb sites are difficult to defend as well. It is not the ideal map.

Lastly, Favela's recent rework has helped the map. It is still in the Ranked playlist, and it can also be played on Team Deathmatch. However, its fame isn't the greatest. It is a night map, so the map looks quite dark. It is also quite big, and difficult to memorize. That combined with people hating new maps gives Favela a poor reputation, just like Outback — another map players have never liked.