This week in T2 Siege: ATK takes the lead in NACL, Goga debuts in Spain Nationals with 5.5 KD

As well as the start of the NA and EU Leagues, the last week also saw the start of national leagues in the EU and APAC regions. Here’s a rundown on some of the biggest stories across these tournaments:

We are almost halfway through stage one of the North American Challenger League and yet currently five out of the 12 teams -- TookTheKids, Karn & Co, Arial Arise, West Garfield Park, and Aqualix -- are tied on nine points. This leaves three teams ahead of them and four teams behind them.

Looking at the top teams, ATK, 1shot, and Elyssar are on 14, 12, and 10 points respectively meaning they are only just edging out the midfield pack. This also made Sunday’s meeting between 1shot and Elyssar the most important of the weekend.

Looking below the midfield, Nokturns has had a very rough stage so far. Despite Zachary "Nyx" Thomas joining to replace Mirage-bound Emma "Marmalade" Peterson, the team has managed just one win in five games. This victory came against 1shot in the opening playday of NACL in which Nyx secured both a 1v2 and 1v3 clutch.

Finally, after playing three matches during the opening weekend, four members of TheHeistLFO effectively quit the team following a public falling out with “Panic”. The team, therefore, forfeited their two most recent games and will likely be disqualified from the rest of the competition.

PSG gets their first win as Fnatic tops the league

While Fnatic continues to struggle in APAC North, they added to their two Japan League wins this week with a 7-2 victory over Sengoku while suffering their first defeat to Donuts USG.

This later game saw a lot of good individual performances as while Lily hit a 1.27 SiegeGG Rating and secured a 1v3 clutch on Sledge, DONUTS still clearly outmatched them with Aokayu, Rento, and Perro hitting ratings of 1.43, 1.33, and 1.24 respectively.

This result meant that Fnatic and Donuts are tied on nine points at the top of the Japan League table alongside SCARZ who on Sunday themselves also defeated Donuts, 7-4.

Looking at the bigger names in the league, REJECT secured their biggest win of the year as they took down FAV Gaming, 7-5, on Bank as Candy secured 14 kills to six deaths. Unfortunately, their momentum was immediately stopped the following day as PSG Esports got their very first win in Rainbow Six over REJECT, 7-5 on Clubhouse.

Finally, after winning 14 straight games during the 2021 Japan League, CYCLOPS lost their opening game against SCARZ last week. This weekend while they started of strong with a 7-4 result against PSG, they then dropped another point against Crest Gaming as they eked out an 8-7 win.

While there are still only three points separating the top six teams, next week we’ll pass the midpoint of the season meaning the likes of FAV and REJECT needs to start catching up quick. 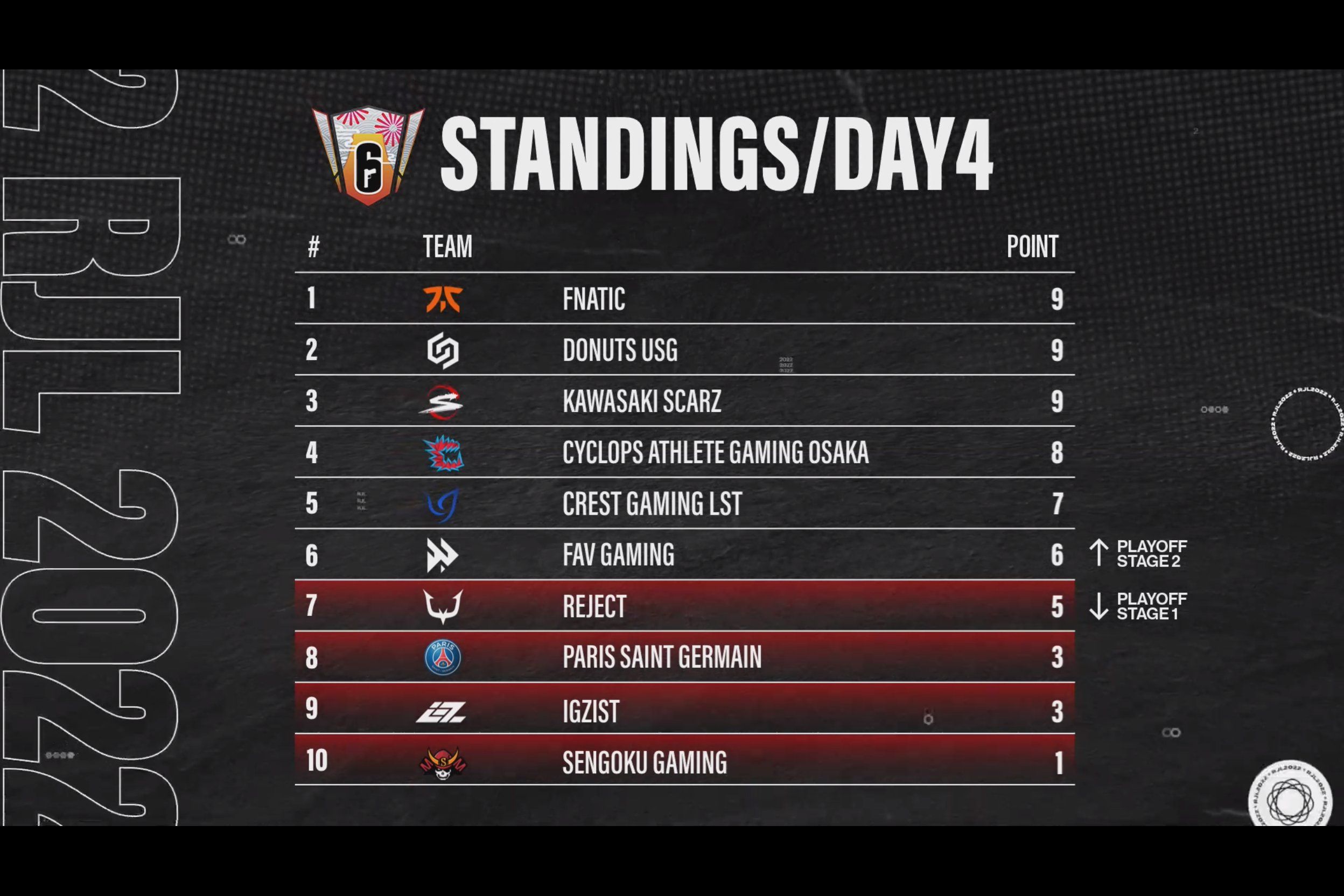 The first of Europe’s national leagues started on Wednesday as the Spain Nationals kicked off its first season as an Iberian-wide tournament.

As well as this, this was the first Spain Nationals season that included Rebels Gaming, the organization owned by Manchester United’s Spanish goalkeeper, David de Gea, and the first season which included the two-time world champion, Daniel "Goga" Mazorra.

Goga had already won the Six Masters Iberia tournament back in February on Movistar Riders which led Rebels to then pick up the whole Movistar roster in the middle of March. Now in his debut game for the new organization, Goga secured 11 kills to just two deaths as Rebels took down the Six Masters Iberia semi-finalists, RVNS Esports, 7-1, in a real statement to the rest of the league.

This result didn’t put Rebels in first place, however, as a 10 kill-death ratio from “Sketch” for Principality led to a clean sweep over Heracles Gaming, 7-0. 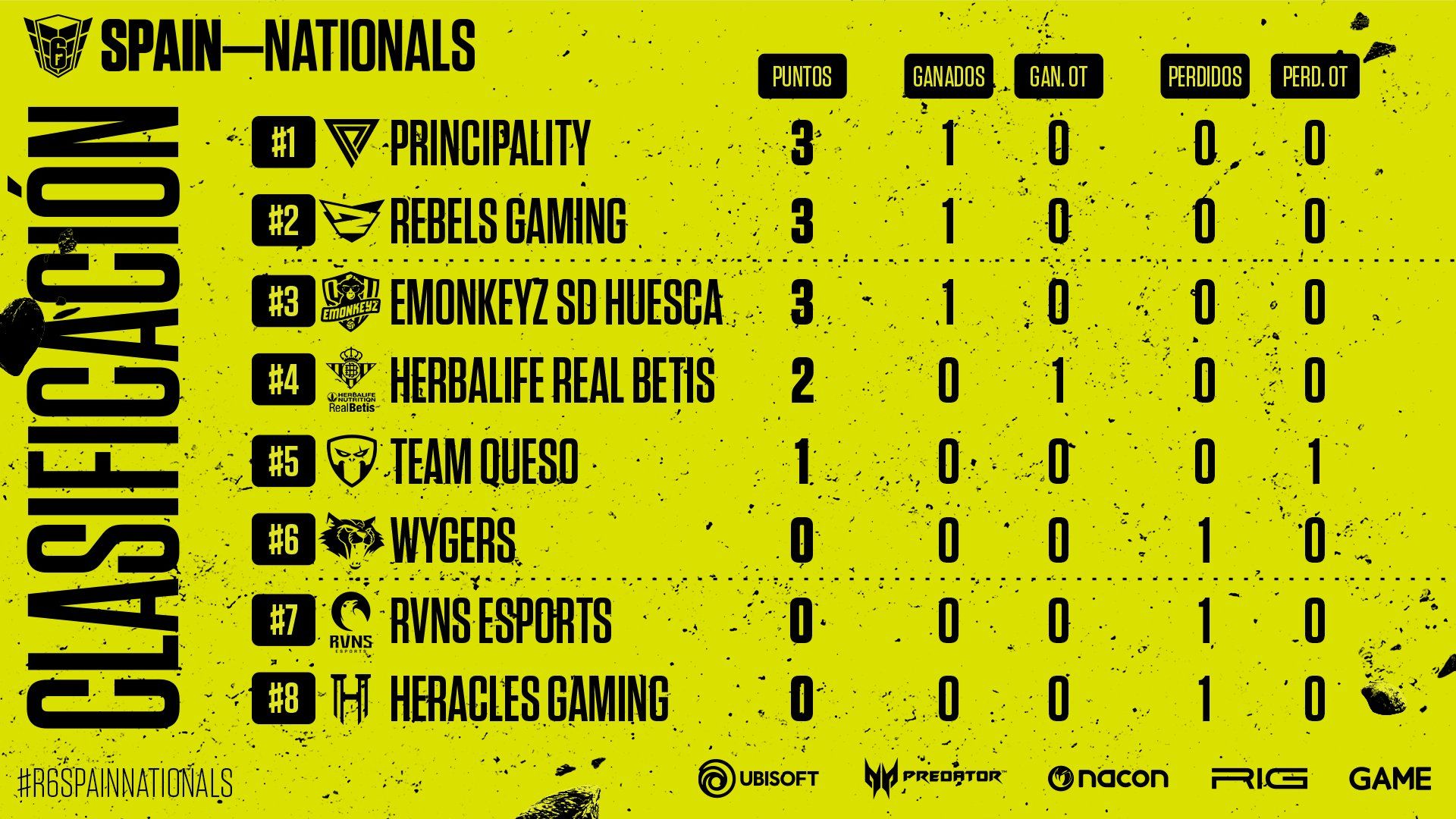 After beating Knights 7-5 during playday one, this week Ludavica took down last year’s runners-up, Bliss, and another recently promoted team, Ground Zero, both in 7-4 scorelines to take the lead in the Oceanic Nationals.

While we saw an underdog run from Team Bliss last year, this is particularly surprising as Ludavica consists of three members from Overt who was relegated from the OCN last year, and two members from Big Dogz who came last in the OCN relegations last year. Furthermore, this roster only got a spot in the OCN due to the disbanding of ORDER following their relegation from the APAC South League.

With only three games gone, they’re not home free yet, however, with notable games against Wildcard and the Chiefs yet to come.

Both Wildcard and Chiefs were featured in the two APAC South meetings this weekend as the Knights got their season back on track by beating both of them, 7-4, 7-2 respectively.

This, therefore, puts Chiefs Esports Club down in sixth place with just three points to their name after winning all four OCN titles last year. It still is early days and with two of the three hardest games already played, they’ll be confident in their ability to climb the table in the coming weeks. 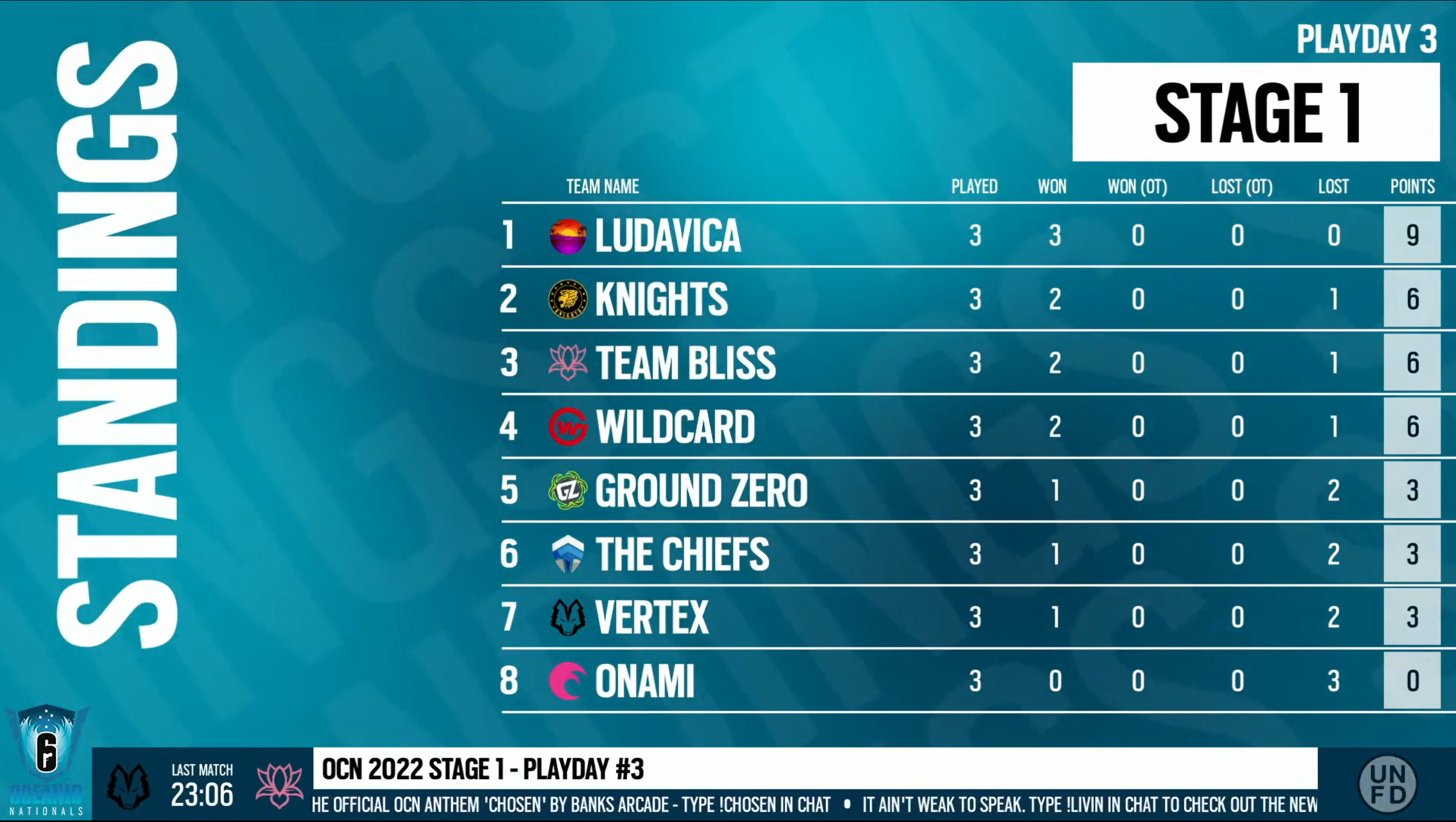 This week saw just two APAC North meetings as T1 beat Talon and DWG beat SANDBOX, both in 7-5 scorelines. This continues what has been a very clean season for these two as yesterday during playday nine of 14 they both locked in a spot in the Spring season playoffs.

While both teams lost their first meeting against SANDBOX, T1 also lost against DWG, and DWG lost against StarRise. This puts them on 21 points while StarRise is on 17 ahead of SANDBOX on 15.

StarRise had been leading the league this time last week but lost last weekend’s games against T1 and Talon. In their five remaining games of the season they still have DWG and SBXG left to play with the latter game taking place on Saturday. SANDBOX will be eager to both overtake Star Rise into the top three and get revenge for the 0-7 defeat they suffered the first time they played in March.

Also of note is Talon, who sits down in sixth place on 14 points. With the top six teams progressing to the playoffs and with the team below them on just three points, they’ll still be very comfortable in this position.

This week saw the Polish national tournament be expanded to include the nations of Hungary, Slovakia, and the Czech Republic to become the V4 Masters. This follows the announcement of the Northern Premier League last week and the introduction of Portugal to the Spain Nationals at the end of last year.

The league will see its three qualifiers - Hungarian, Polish, and a combined Czech and Slovak one -- take place in the first few weeks of May before the main league presumably starts at the beginning of stage two in June. 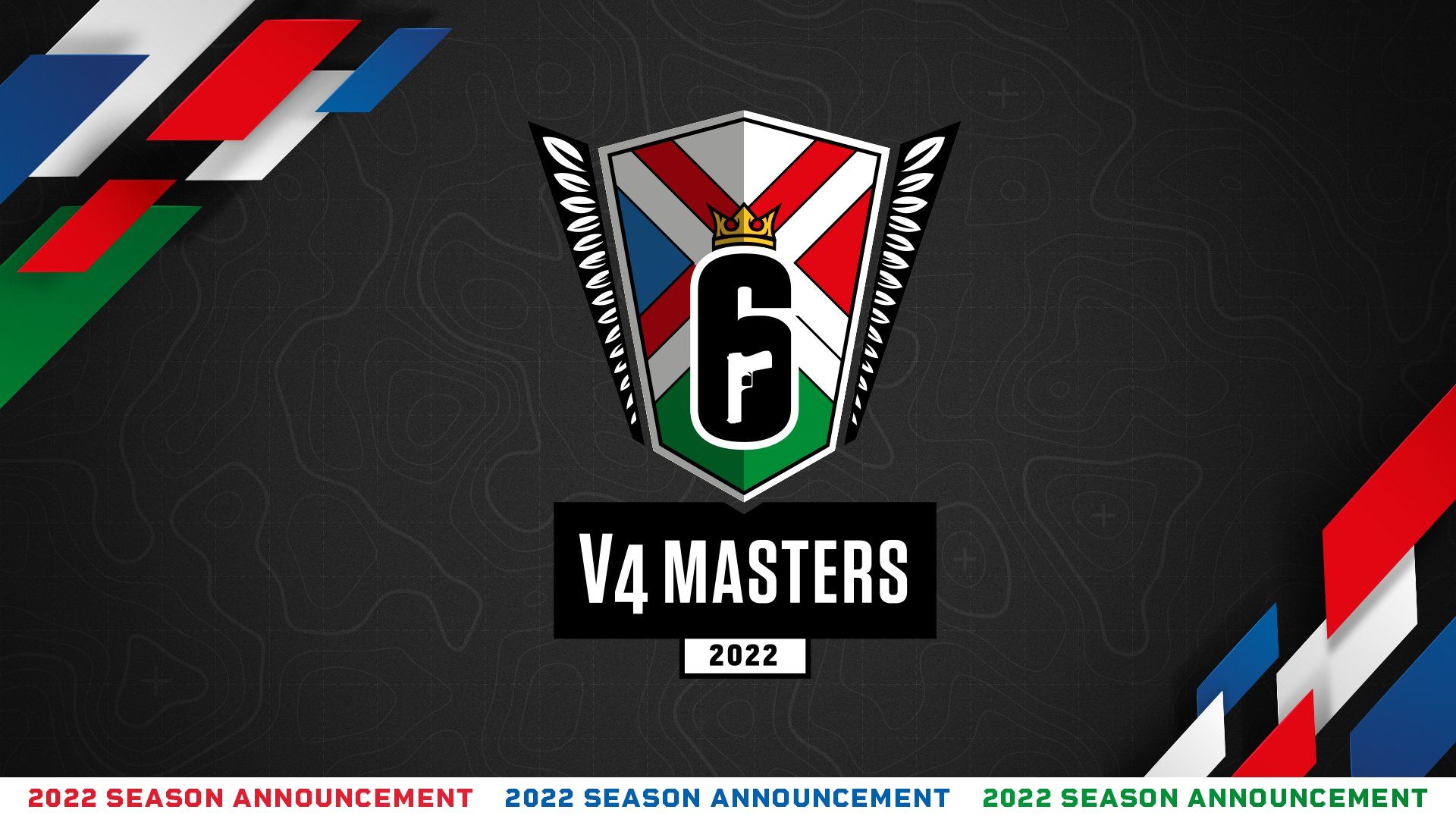 With the 2022 Season now on its way in all four regions, this next week will see a lot of action.