With the Charlotte Major fast approaching, here are some of the standout statistics behind the previous week of professional games.

Here are the final stats of the week rundown before the upcoming Six Major.

Looking For Org is set to break a three-year record

The French “Looking For Org” roster which previously played under the Team Vitality banner is set to be the first organization-less team to compete at a global event since the 2019 Six Invitational.

At SI 2019 the Korean “mantis FPS” roster qualified via the APAC open qualifiers and went on to be signed by Cloud9 six weeks later. “Orgless” at the Six Paris Major, meanwhile, is the only prior Six Major attendee to not represent an organization with them being signed by Mock-it Esports one month later.

There are still 10 days for the LFO roster to be picked up, though, and last-second acquisitions have taken place before prior tournaments. Of note is Evil Geniuses which signed their roster eight days before the ESL Pro League Season 6 Finals and G2 Esports who famously signed their first team from PENTA Sports just three days before the Six Paris Major started.

With stage one of the EU League now over, many G2 Esports fans rejoiced that their team is back on the global stage and will be competing at the Six Charlotte Major.

After a massive change to the team that saw three new players join back in March, a good result during stage one was step one in G2’s rise back to the top of European and global dominance. The issue for G2 is that this stage was still underperformance compared to their prior rebuilds.

When looking back on the three prior iterations of a “new-G2” lineup, they finished their debut stage as the first or second-placed team in Europe, while in this stage they finished fourth. Furthermore, a fourth-place finish is G2’s seventh-worst performance across 10 stages:

When you factor in that the best team in Europe, the ex-Team Empire roster, was dropped from their team and unable to play in the EUL during this stage, this looks even worse.

Obviously, instant success is not a necessity as neither of the prior big changes to the G2 roster managed to keep up their top-level performances. The players would likely prefer being a favorite come the Invitational rather than peaking now and falling off just as quick.

Looking at another team that made considerable changes, Rogue has had a similar pattern with the roster’s prior major changes always leading to a top-two debut. Now after adding in Tom "Deapek" Pieksma and Juhani "Kantoraketti" Toivonen they finished the stage in sixth place, a very notable break in the pattern

Caption: The color coding relates to the player’s nationality.

Rogue and G2’s prior results each show that just because a team makes big changes doesn’t mean that stage is a write-off, in fact in both teams’ cases that’s been the roster’s peak result. That may add a bit of worry to G2 and Rogue.

With the Brazilian majority XSET roster qualifying for the Charlotte Major via the NA League, this means the upcoming major will have just 14 American players -- five from Astralis, four from Oxygen and DZ, and one from XSET.

This is the second-lowest number of Americans at a Major ever behind just the Six Paris Major which had 12 with only three NA teams in attendance. For Six Invitationals meanwhile, the lowest is 16 at SI 2020.

Curiously, despite this, the Paris Major was North America’s most successful Six Major to date with two teams making it to the semi-finals and Evil Geniuses finishing in second place. Since then no NA team has won a single map during the playoff stage of a Six Major tournament.

Similarly, SI 2020 was North America’s most successful recent Six Invitational as Spacestation Gaming claimed the title ahead of TSM in third.

South America once again proves it's better than Mexico

Last week’s Copa Elite Six tournament ended with the four Brazilian teams unsurprisingly qualifying for the Charlotte Major. What was a shock to many, however, was that challenging for the final two positions was Furious Gaming and Pampas from Argentina rather than Six Karma and ALPHA Team from Mexico.

With the Mexican Championship being a LAN league tournament and previously including multiple ex-professional players from the USA and Brazil, it has generally been seen as the second-best of Latin America’s three sub-regions. The numbers don’t really support this, however. 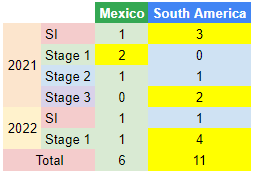 Finally, it’s notable that the map won during the recent Six Invitational qualifiers was by Akave, a Brazilian majority roster competing in the Mexican Championship.

Even with a number of Brazilian ex-Pro League players and weekly LAN experience, Mexico is falling short of South America fairly consistently. The reasons as to why can be argued about extensively, however, Argentina’s proximity to the Brazilian scene has likely made their scrimmages much higher quality and more regular which surely helps.

Using a knock-out title system similar to that used in boxing and professional wrestling, we here at SiegeGG have been tracking the path of the theoretical Siege Title Belt holders throughout the history of competitive “Rainbow Six: Siege”.

Starting with gBots victory over GiFu in the very first Pro League game, they kept the belt until their next loss when it transferred over to the team which beat them. This has continued for over six years, passing between all four regions.

After the belt failed to make it to either the 2021 Six Invitational or the Six Mexico Major with non-qualified rosters holding it between stages, SSG then took it to the Sweden Major. Here FaZe Clan won it for the LATAM region only for TSM to take it back to the North American region following their SI 2022 win.

Now, the belt once again will miss a global event as Parabellum currently holds the title. This has been caused as SSG won the title off of OXG only to then lose it to beastcoast the following week. The title belt’s full journey across 260 games can be seen here.

This is the third global event in the last five that the belt has missed purely due to the sheer number of upsets within the North American region.