Halfway through the Six Berlin Major, here are some of the standout numbers so far.

Head-to-heads for the QFs

The only time G2 Esports and Rogue met with these 10 players was earlier this stage in a match that ended 7-1 to Rogue. Including just the core rosters, the scoreline is 1-1, but it’s 3-1 to G2 over the last year.

Elevate have also not played w7m before, but have tied 1-3 in maps to FURIA and are 0-2 against FaZe. W7m, meanwhile, are 2-0 up against Elevate’s fellow SEA team, Gaimin Gladiators, and have played no other APAC teams beforehand.

Finally, FURIA vs FaZe is a game we’ve all seen before. In total, FURIA have won only two maps out of 14 -- both 8-7 results. During this stage, FaZe have won three out of three maps against FURIA.

Doki is G2’s main entry player and he has the worst entry record in the team and the third-worst record in the entire tournament. This mainly comes from the defence, where he has three opening kills and 10 opening deaths.

This entry record would’ve been even worse if it wasn’t for two opening kills Doki earnt in their final game, a surprising 7-0 win against FaZe.

FURIA & Wolves the most clutch-reliant teams

FURIA and Wolves both have eight clutches each, the most in the tournament. This is a particular issue for Wolves, as four of their six games went to overtime and they may be unable to pull off these clutches against better teams.

The defence has won around 55.6% of rounds across the 48 maps played so far. This is much higher than the 51% usually seen in regional leagues. This also isn’t due to a lack of data, as 48 is more maps than seen in any regional league.

This high figure is being driven by the popularity of Oregon and Theme Park, both of which are two of the most defense-sided maps and also the two most played so far.

A 14% survival rate for FURIA’s star fragger is shockingly low as he is sandwiched by DWG KIA’s RIN and coted on 10% and 16%. The key difference here is that Fntzy has the best opening record in the league and a kills-per-round figure of 1.11, while both DWG players have a figure no better than 0.47.

SiegeGG has already written about how Elevate used Fntzy’s death rate to their advantage.

The closest player in playstyle to Fntzy is Mowwwgli, as he also has a very high KPR of 1.00, but a very low survival rate of 21%. His job is also to push until he dies.

Kyno is XSET’s most important player

As well as the most kills and joint most opening kills, Kyno also has the most plants while playing on Hibana. Meanwhile, XSET’s two lowest fraggers primarily play Finka on the attack.

Kyno is a godsend for North America and will need his teammates to step up if they want to take the title home.

The best opening record goes to…

With a plus 15 opening kill differential, MNM Gaming were, on paper, better at getting opening kills than any other team in the tournament. This is without one single player particularly excelling in this role.

Wolves Esports are also notable in this metric, with an opening kill differential of plus 13.

Onigiri needs to pick it up fast

Out of the 40 players in the playoffs Elevate’s captain has the second-lowest opening kill differential, the lowest KOST figure, the fourth lowest survival rate, and the sixth lowest kill differential, all while getting no clutches (the only player not to get any) or plants.

Considering his operator choices (primarily Zofia and Aruni), his high number of opening engagements, and low survival rate, it is clear he has a role similar to that of Fntzy and Mowwwgli -- he’s just struggling to pull it off.

Bullet1 and Astro being carried?

The tournament’s lowest rated Finka player is Bullet1, while the second-lowest rated Zofia (behind Onigiri) is Astro, both on FaZe. While the questionable 0-7 loss to G2 did hurt these figures, it’s still weird seeing Cyber on a 1.24 Rating on Twitch and Kaid, compared to a Zofia or Finka player on ratings of 0.82 and 0.90.

On the attack, players played 16 unique operators. This includes RIN on Ash, an unusual choice considering Finka was usually available.

On the defence, there were 20 unique operators picked, the most unusual of which is likely Frost from EnvyTaylor, an operator he is used to playing. 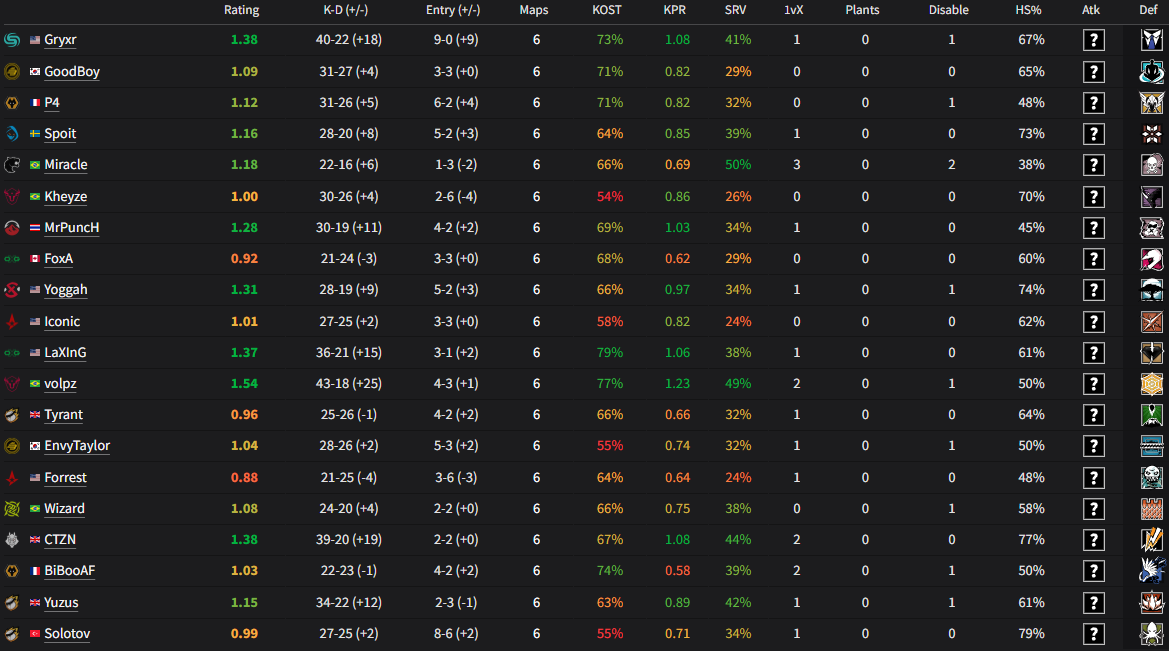