Here are some of the most interesting stats with the Group C teams at the upcoming Six Jönköping Major.

Next week, the Six Jönköping Major will see the top 16 teams meet to compete for a global title. The tournament is split up into two parts, with the group stage taking place from Monday to Wednesday, before the top two teams from each group progress to the three-day playoffs over the weekend. 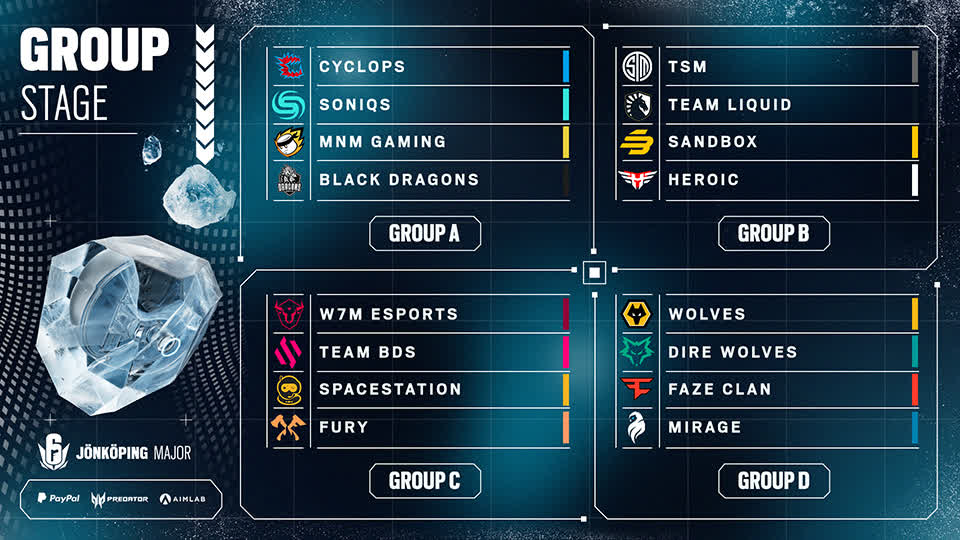 With all but one player playing at this level for the first time and as the lowest seeded roster in the least successful region, FURY are in many ways out of their league.

This is not to dismiss their chances, as upsets happen fairly commonly in Siege (especially involving APAC teams) but it would need to be an upset for FURY to achieve a strong performance.

Notably, unlike their closest comparisons, Elevate, FURY have not shown themselves to have a star fragger like Paramin "Onigiri" Suwanwattana. Furthermore, in APAC South, their main entry player ended with just 10 kills out of 22 opening engagements, and saw their Zofia-Jaeger main end with a minus 11 kill differential, the fifth worst in the league.

These are not figures you can put up against Australian and South East Asian opponents if you hope to rumble with Spacestation Gaming, w7m esports, and Team BDS.

Furthermore, the core of the roster does not have a strong history on LAN environments having lost multiple APAC LAN tournaments early albeit this was a number of years ago.

APAC rosters always get dismissed at tournaments despite some promising performances from the likes of DWG KIA and Elevate over the last two years. If FURY can prove the statistics wrong and make it to the playoffs, they would have completely reinvented themselves in the space of three weeks (and six months, considering their zero-point first stage this year).

Dylan "Bosco" Bosco has attended four Six Major events and finished every single one of them in the quarter-finals. The two-time Six Invitational champion has only ever failed to escape the group stage once in 12 global tournaments (while playing for eRa Eternity) so, while this may seem like a hard group, failure at this level would be a low for him on a roster with so much promise.

SSG have the core of an SI-winning roster with NAL 2021’s best overall player added to it. This stage saw the fifth piece added in the form of Soniqs’ Alexander "Yeti" Lawson, which may be key to their Major.

Yeti was a central part in Soniqs’ NAL performances over the last two years and hit a 1.24 SiegeGG Rating during Stage 3 on SSG. This included an 18-5 entry record, which was the second-best in the NAL and a far cry from the 4-17 he achieved while on Soniqs in Stage 2.

While he had always performed well on entry, he was never Soniqs’ primary entry as this role went to Pablo "Gryxr" Rebeil, Richie "Rexen" Coronado, or Evan "Kanzen" Bushore primarily. It will be interesting to see how well this record holds against better rosters.

There’s also the question of Matthew "Hotancold" Stevens. Since joining SSG, his SiegeGG Ratings have been as follows per stage; 1.33, 1.48, 0.95, 0.99, and 1.01. While technically improving through 2022, there’s a world of difference from 2021 Hotancold and 2022 Hotancold. At global events, his Ratings have been 1.07, 1.02, and 1.08. There’s a beast there that they’ve been unable to unlock when it mattered. If Hotancold and Yeti both have particularly good tournaments, then SSG are very good value for a title challenge.

It’s been three years since BDS burst onto the scene. While they have finished almost every EUL stage in the top two places, they have faltered globally. After a fourth place finish in their debut Six Invitational, in 2020, they’ve finished in joint-eighth place three times and in the semi-finals once. They can make it out of the groups, but never push far enough in the playoffs.

Usually, this is seen as an issue with BDS’s set up. They have arguably the world’s best support player, Loïc "BriD" Chongthep, and the most consistent fragger, Stéphane "Shaiiko" Lebleu. But, if one of them faltered, there was little backup and no team is making it to the top in modern Siege with just one world class fragger.

Shaiiko was always a beast to come up against and now, there are two of them.

If making it to the quarter-finals was always the default performance for BDS, this change really has the ability to push them upwards into true title contention.

All eyes are on Julio "Julio" Giacomelli here.

W7m finished in the top four just three months ago, so we know they can perform very well internationally. They now have won the Copa Elite Six for the first time in their history under Julio’s leadership, following two failed attempts. There’s a clear path to the title here.

Statistically, the team has also been close to faultless. During the CES, three of the top six players were from w7m, while Gustavo "HerdsZ" Herdina (who was arguably the weak link during the BR6 stage) improved his minus seven opening differential to a plus seven.

Short of an overtime loss to FaZe Clan in the opening game of their Stage 3 run, their one anomaly was a 3-7 loss to MIBR during play day three, whose Luca "LuKid" Sereno went 12-4. Even this didn’t include any shocking performances from w7m and was effectively decided by two clutches from MIBR’s side to get what would’ve otherwise been a difficult attacking-half win on Oregon.

There’s not much else to say about w7m; they are doing everything right and it’ll likely take a unique play style, rather than pure force, to take them down. After all, they’re used to playing against the most potent fraggers in the BR6.

BDS previously tied 4-7, 7-4 during the Sweden Major groups against Julio before losing 1-2 during both the SI 2021’s upper-bracket quarter-finals, and the SI 2020 lower-bracket semi-finals against him.

Most of these prior meetings came at the last Six Major in Sweden, where Julio’s NiP, Yeti’s Soniqs, and BDS were in the same group. Here, NiP and BDS had 15 and 14 points, respectively, while Soniqs finished way down on four points ahead of Invictus on three. NiP then went on to beat SSG on the way to a runners-up finish.

Teams and players to watch

SSG, w7m, and BDS can all be said to be tournament favourites. BDS have a new star fragger, w7m have a new world championship-winning IGL, and SSG are one of only three prior champions in attendance.

One of these three (at a minimum) won’t make it out of this group, which will be a shock. With each team making a roster change, it’s impossible to call before their opening game.

With this in mind, the players to watch got to be the newbies from these teams -- Yeti, Julio, and LikEfac -- and they each are meant to be the key to a title.