The Berlin Major playoffs begin today, with FaZe Clan vs FURIA Esports being the last matchup. Both teams have a lot going for them; FaZe are the current LATAM champions and won the Sweden Major in Nov. 2021, while FURIA are attending their sixth LAN event in a row.

Now, two teams that are very familiar with each other will meet again for a semifinal spot.

On paper, this is the most cut-and-dry game of the whole tournament. Out of the 15 meetings between these rosters, FURIA have only won twice and both wins were with razor-thin 8-7 margins. Furthermore, these two FURIA wins came in the BR6 League in Stage 3 last year and Stage 1 this year.

Put simply, FURIA need to double their all-time record against FaZe to win this best-of-three.

The first win was on the final play day of the season and made no impact to the standings. Both teams had already qualified for the CES and BR6 Finals, while FaZe had already locked in the top seed.

In FURIA's defence, they topped their group here at the Berlin Major, while FaZe did not. However, it's hard to take FaZe's 0-7 loss on Wednesday against G2 too seriously and it's likely they would've been able to win their group if they played to the quality we saw on Monday and Tuesday.

FaZe should be the overwhelming favourites in this game. But, even if FURIA lose, this is still a good result for them as they have made it past the group stage only for the third time in their history.

New FURIA coach Julio also helped his team to the playoffs, while his former team NiP was eliminated in the group stage -- a personal victory for him as well.

Looking at just their head-to-heads, the most common map they've played on is Clubhouse… but FURIA have never won here.

The maps they did win on were Coastline and Theme Park, but FaZe have also won here at least once each. Furthermore, Coastline is no longer in the competitive map pool.

Villa, Oregon, and Bank have also only been won by FaZe, while they haven't faced FURIA on Kafe before.

When looking at where they're most likely to play on today, it's not going to be determined by success at this tournament. The two teams will know each other much more intimately than any other meetings at this tournament and will rely on their past experience instead.

Nevertheless, when looking at these records at this Major, Villa, Clubhouse, and Oregon are FURIA's worst maps, while FaZe have avoided Border, Chalet, and Clubhouse.

When these two teams last met, in the Stage 2 CES, they went to Clubhouse and Bank, while Kafe was the decider. FaZe won the match in a commanding 2-0 (7-4, 7-4) as Cyber led the way.

Fntzy had always been FURIA's star player and this tournament has been no different. He is currently the second best player at the Major with the best entry record… and the second-worst survival rate.

Fntzy is probably the best in the world at his specific job on attack of pushing until he is dead, or he has an ace. He is a relentless killer while attacking where he has 12 opening kills to three opening deaths -- by no means is he failing to do his job.

This largely works out well for FURIA -- by the time Fntzy is dead, he usually leaves the round in a 4v3 position with their opponents’ primary fragger dead early in the round and the front line beaten, which is enough for Miracle and co. to clean up.

Previously, the only teams that have been able to consistently get past this hurdle were FaZe, who tackled Fntzy head on and stopped him from securing opening kills, or Elevate, who won those 3v4 situations once Fntzy was out of play.

On the defence, it is a completely different story. While Fntzy is the top-rated player, he's not the sole spearhead for FURIA. R4re has more opening engagements and Fntzy is third by kill differential. As such, FURIA have a higher defensive win rate than an offensive win rate.

The 0-7 loss against G2 messed up FaZe's overall fairly average offensive win rate, but they still were weaker on this side in Stage 2 than on their defenses.

Despite this, FaZe are probably confident in their ability to win the title as their current profile is almost identical to their performance at the Sweden Major.

While much attention has been given to Astro's performance, we have proof this is not a big issue. This is effectively the same FaZe that won a Major nine months ago and they are likely confident they can beat FURIA for a 13th time.

No matter the context behind the wins, it's truly remarkable how different the two games FURIA won against FaZe were:

Finally, in FURIA's 7-8 loss to FaZe at the 2021 Six Invitational, Lenda led the team with 20 kills. Meanwhile, two of his teammates had just five kills and Fntzy had a 0.76 SiegeGG Rating.

These games were unique in their own way, but they show that FaZe don't have a particular player FURIA must target and they're not completely reliant on someone like FURIA are on Fntzy.

A FaZe loss would probably be one of the biggest upsets of the tournament on paper and would likely be on the back of Julio more than any individual player.

FURIA need to bring out a surprise against familiar foes FaZe, or they need to have been hiding an extra 10% throughout the groups to get this win.

As for FaZe, if they can repeat their last showing against a top-seeded team  -- a 7-4, 7-4 on Clubhouse and Bank -- they will likely cruise to a second Major title. If they lose, however, then their 0-7 "throw" against G2 will suddenly be framed in a different light.

So far, it looks like it was a stroke of genius -- intentional or accidental. But should they lose, that 0-7 loss will likely haunt them as they head home to Brazil. 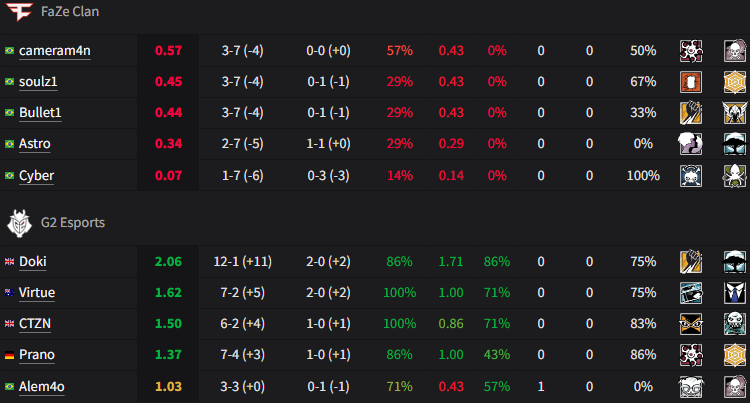