Here's all you need to know about Stage 3 of the APAC South Division in 2022.

Potential changes to APAC South's structure have not been kind to the region ahead of Stage 3. Two organizations have left the scene entirely, one team has disbanded, and the outlook of players on Twitter has largely been negative.

This follows after latency issues in Stage 1 caused the APAC Playoffs to get scrapped entirely in Stage 2 and now also in Stage 3.

Despite that, the region has never looked better on the international stage. Elevate's "LAN-dodging" days of 2021 feel long-gone and they've qualified for all three international events so far this year. Hot on their heels are Knights, Gaimin Gladiators, and Dire Wolves.

Here's everything you should expect from APAC South for Stage 3.

Six of the eight teams in APAC South have seen changes from Stage 2, unlike the dearth of activity. The most striking move was undoubtedly the exit of Chiefs ESC from the scene and its team disbanding.

*Changes marked with an asterisk. Check out all the changes across the world here.

Storylines to watch for

It's tighter than ever with just six play days

Due to the disbanding of the Chiefs ESC team, we are in for a seven-team APAC South in Stage 3. There will be only three matches each week, with one team each sitting out one of the seven play days.

This change follows the one introduced in Stage 2, where the APAC Playoffs were removed. As such, it left teams under pressure to perform and finish in the top two after just seven BO1 matches. Last stage, the second APAC South slot for the Berlin Major came down to a 1v2 clutch for Gaimin Glaidiators at 7-7 on the scoreboard.

Now, with just six BO1s to play, teams have even fewer allowances to slip up and will need to be on song throughout to ensure they finish in the top two.

The former Invictus team are in serious trouble

The Invictus Gaming "super-team" is super-dead. In between Stage 2 and Stage 3, they lost their two best players -- Matin "SpeakEasy" Yunos and Jack "Jigsaw" Gillies -- before losing their organization as well. Team coach Ellis "GiG" Hindle is also set to leave, though he will continue helping the team out until he finds a new one.

They're now known as Tyde, harkening back to the name they used in Season 6 of the Pro League, but the replacements they have brought for two of their best players will not fill their fans with confidence.

Former Fnatic man Tex "Tex" Thompson is the big name here, who made it to the Six Invitational 2020 main stage with current teammate Patrick "MentalistC" Fan on their former team. However, he has not played since he was benched after the end of Stage 3 in the 2021 season -- nearly a year ago.

Joining alongside him is Hafiz “ShibeNuts” Al Fayyed Bin Yahaya, who was a complete rookie at this level. He has only played competitively twice in his entire history -- in the Operation League SEA for a mere two months in Jul. 2021 and Apr. 2022.

In APAC South, which has been a competitive league from top to bottom since its inception, there is no room for error and Tyde very much look like one of the weaker teams.

Dire Wolves are not a bad team by any stretch of the imagination, even though they finished in a dismal fifth place in Stage 2. Weichen "Reeps96" Wu was described as the "Asian Spoit" by Dire Wolves coach Odin "Odin" Hempel and could be an exciting prospect to join the very team that went 7-0-0-0 in Stage 1 and attended the Charlotte Major.

Of course, the only way to know for sure if he lives up to his coach's billing is to wait and see how Dire Wolves fare, but their first true litmus test will be their second match of the stage -- against Gaimin Gladiators.

Meanwhile, Knights have gone from strength to strength. The Australians signed former Invictus Gaming captain Glen "Lunarmetal" Suryasaputra, who nearly helped his new team to the Berlin Major. Only a lost 2v1 clutch stopped them, but that may have been remedied in Stage 3.

The Australians have stolen another key piece of the 2021 Invictus roster -- this time, their star, the league-best player Matin "SpeakEasy" Yunos.

He replaces Jai "Quiz" Riddle-Browning, who struggled to play to the level required despite primarily playing on Finka and Wamai. Both these roles are second-nature to SpeakEasy and Knights' newfound added firepower makes them a very real threat to not just Gaimin Gladiators, but even to Elevate.

When is it starting?

APAC South starts on Sep. 15, with play days every Thursday for the next seven weeks starting at 4:45 PM UTC+8, except on Oct. 6. Instead, there will be a play day on Saturday, Oct. 15 at the same time. 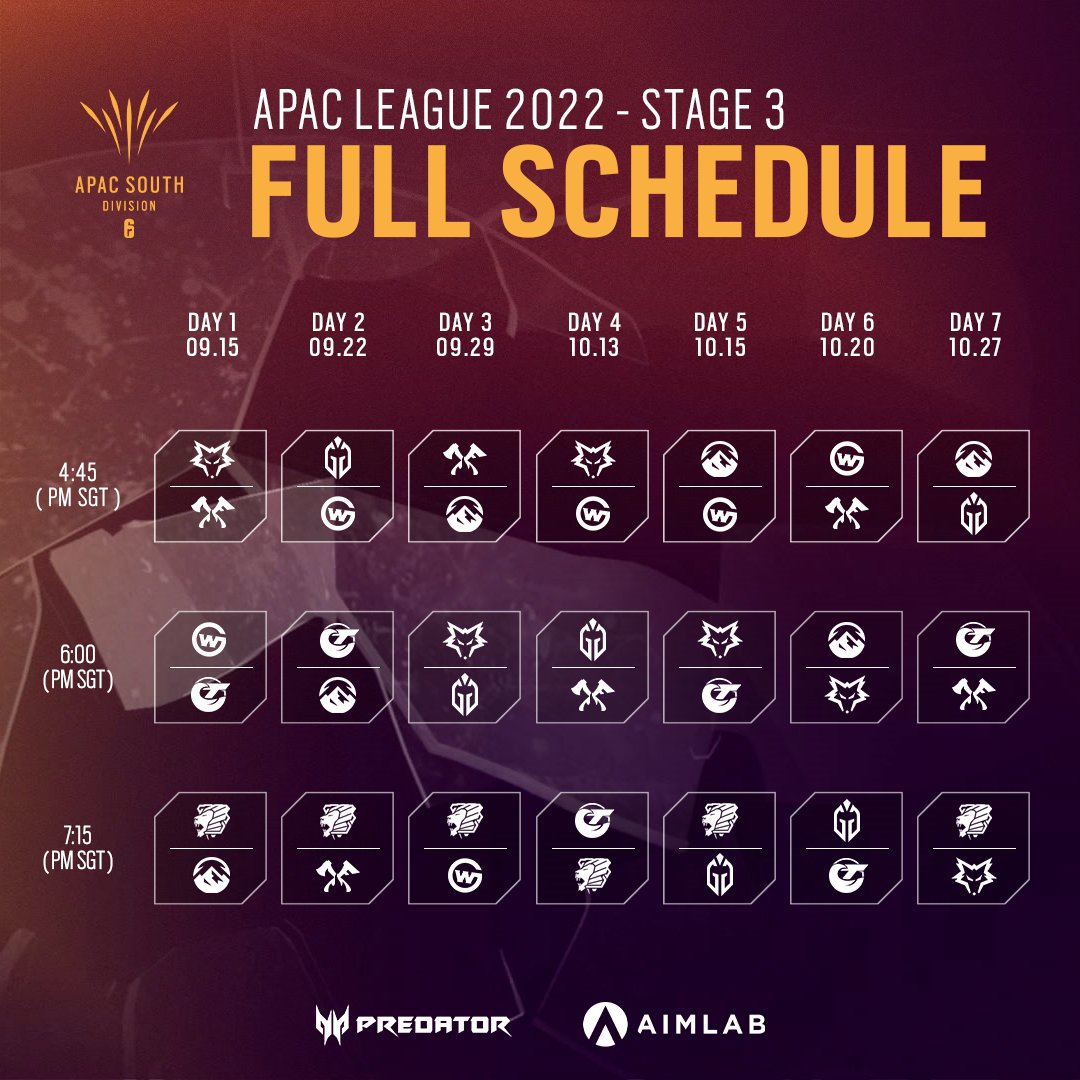