After another play day of NAL action, the standings haven't become any more clear.

Matthew “Hotancold” Stevens and Spacestation Gaming executed a 3-3 attacking half on Oregon behind a ferocious Ying-centric attack, which segued into a 7-3 victory following a 4-0 defensive effort.

Individual performances are often the result of great team performances. However, it’s hard not to give Hotancold tons of individual credit for Spacestation winning this game in the emphatic fashion it did. He had a staggering 21 kills on the day, the second-highest single-game total during Stage 3. Only Astralis’s Jack “J90” Burkard, who had 22 in a losing effort against Oxygen, had more during a single map. 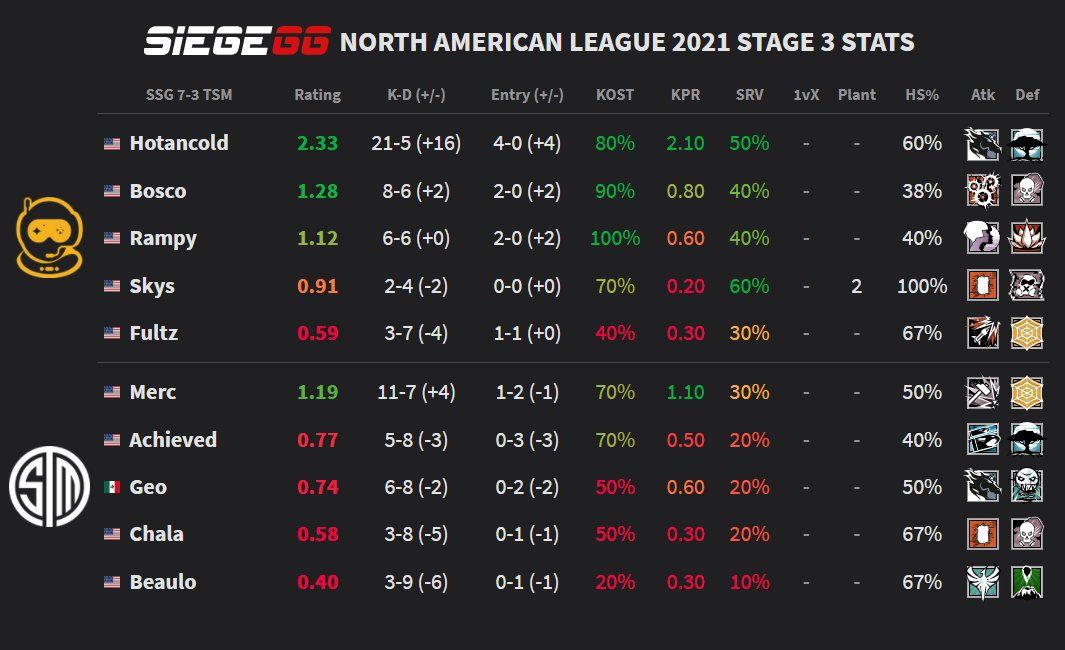 The victory was huge for Spacestation, who now enters into a three-way tie in points for first place in the NAL. Currently, the top of the league is in a circular firing squad via the head-to-head tiebreaker. Soniqs beat Spacestation, who beat Oxygen, who will play Soniqs on Oct. 20. All three teams have 12 points, Spacestation and Oxygen even have identical round differentials at +13.

With three weeks remaining, out of the three, things look the best for Spacestation’s chance at first place. Oxygen and Soniqs still have to play each other, but before that matchup happens, Soniqs play TSM and Oxygen play DarkZero, all four of whom aren’t exactly slouches.

Spacestation’s remaining schedule, which features DarkZero, beastcoast, and XSET, is the easiest -- the squad has already played the other two teams they’re tied with in points. Put simply: Spacestation controls its own destiny in its bid for a second consecutive NAL first place finish.

On the other end of the NAL spectrum, XSET’s situation is looking dire. Before today, the team needed some kind of points somewhere on its schedule, which features DZ, TSM, Oxygen, and Spacestation -- all four of the perennial top four teams in the league. But yesterday, XSET peeled off two crucial points in a close overtime victory against DarkZero; the second time XSET have beaten DZ in regional competition.

All the same, XSET needs more points, desperately. The squad still has a tough road ahead, even though they’re eighth. They do not hold the tiebreaker against Mirage and Astralis, the two closest teams from them in the points standings. XSET isn’t in a great spot, but it has more chances to gain points, albeit against tough foes. Expect the battle to evade relegations to come down to Oct. 20, the final playday of the league. 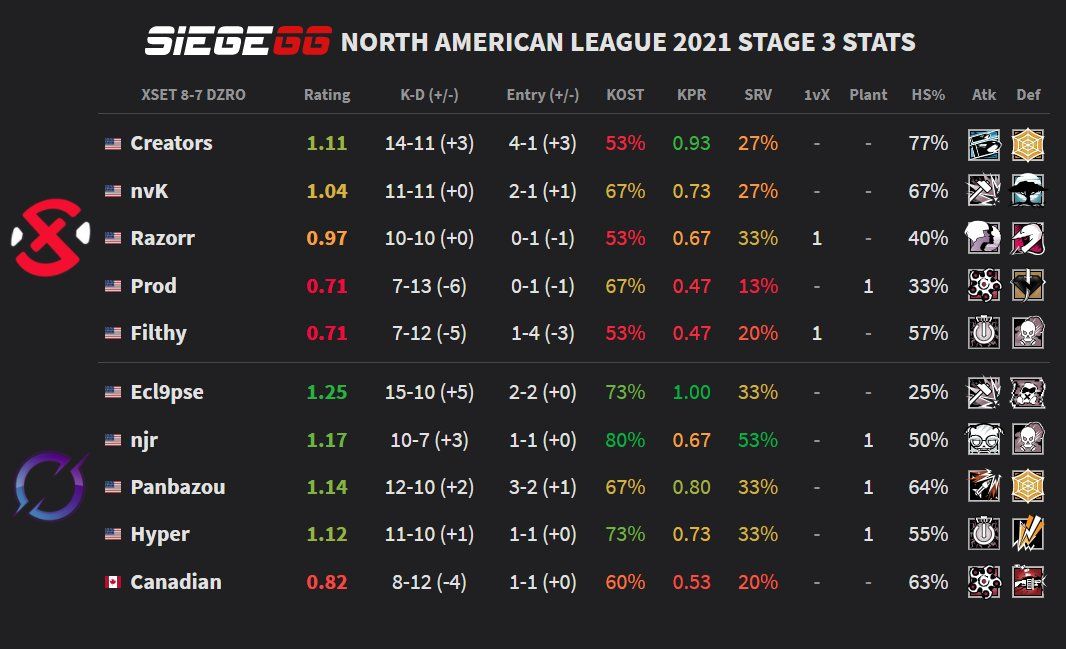 On the other hand, DarkZero had significantly better stats than XSET despite losing the overall match. Only Troy “Canadian” Jaroslawski posted a negative kill/death ratio, an understandable occurrence given his support role.

XSET is in a battle to evade relegations, and DarkZero is in a similar situation with the fourth Major-qualifying spot. The black-and-purple side is two points away from overcoming TSM for the final spot in the Major, and with four more chances to gain points, could sneak into that spot. Their next game, against Spacestation, will show a lot about where this team is coming into the back half of the season.

Astralis have not been playing like themselves of late. They have serious talent on this team -- J90, David “iconic” Ifidon, and Matthew “DPfire” Macway are all mechanically strong -- but something isn’t clicking. If the players can’t find points in their final two games against beastcoast and DarkZero, the roster will have to fight for their right to remain in North America’s top-flight league.

It’s do-or-die time for Astralis. It needs points, badly, through either a regulation win or at least an overtime push in both games. But even outside of two victories, its destiny might not be in its own hands. It has the tiebreaker over XSET, which sets it up, but it’s time to make that advantage count. 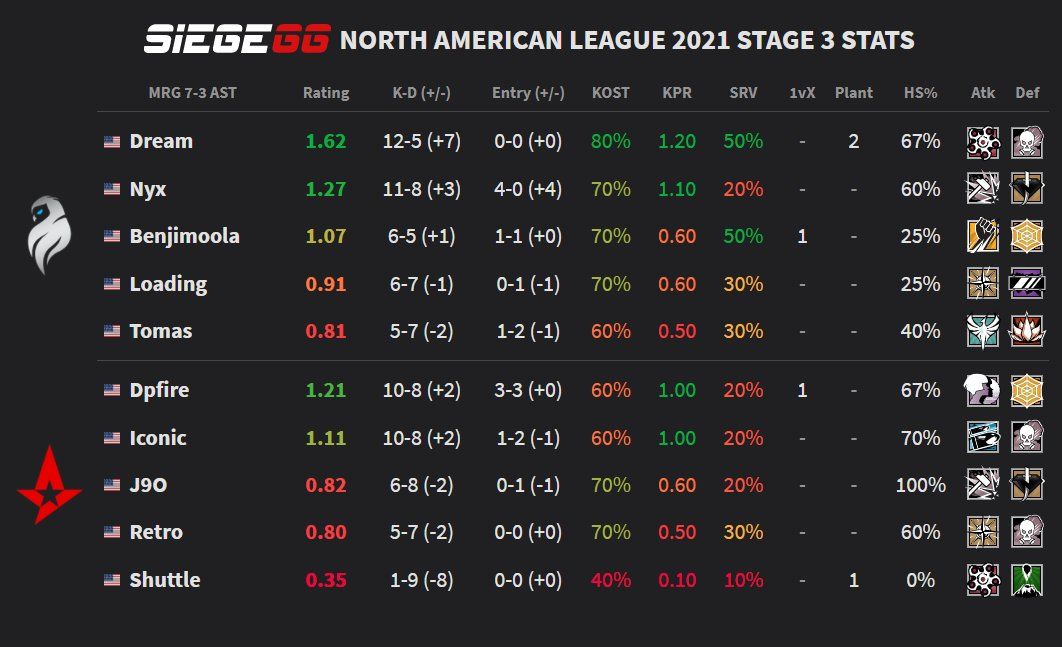 Two separate logjams that will be separated soon, but not now

So, what are we looking at heading into the final calendar month of the North American League?

There’s a three way fight for first place, highlighted by Spacestation, Oxygen, and Soniqs. There’s quite a few teams that could sneak into the fourth spot, there are a staggering four teams within one point of each other. Finally, as far as a combination of historical and current form indexed by raw point total goes, there are three teams in significant danger of relegation: Mirage (who are also, somehow, within striking distance of fourth), XSET, and Astralis.

With three play days (and four DarkZero matches) remaining, nothing is set in stone, except that the top three teams will at the very least qualify for the Major, if not the 2022 iteration of the Six Invitational.