Mexico Major: By The Numbers

With the Mexico Major done, it is now time to look at the statistics.

After an intense week in Mexico City, the second international event of the “Rainbow Six Siege” calendar is now over. Let’s have a look at the numbers to have a better picture of the whole event.

For a complete rundown of the group stage, click here.

Despite many expecting the ending of LATAM’s supremacy, especially after the Ninjas in Pyjamas were eliminated, the Brazilian rosters proved the viewership wrong and placed three teams in the playoffs.

Overall, the LATAM teams dominated once again as the region finished with the highest win rate at 61.7%. Meanwhile, NA finished as the worst region at the event with a win rate of 34.7% after both TSM and DarkZero Esports were hit with COVID diagnoses.

Looking at the results, it is fair to say that most of the games were close . Exactly 50 percent of the matches saw at least 12 rounds played and 30 percent were decided in overtime.

This is how many times we saw each one of the eight possible results in a match of Siege:

In terms of organizations, only Spacestation Gaming and Team Empire had also qualified to the playoffs of the previous Six Major at Raleigh in 2019. But going back a further year to 2018, none of the playoff-qualified organizations in Mexico had achieved the feat in Paris.

In terms of players, Dylan “Bosco” Bosco is the only player to have played in every Six Major playoffs. He competed for Obey Alliance in Paris and SSG in both Raleigh and Mexico City.

Although they did not make it to the Grand Final, Luccas “Paluh” Molina and Stéphane “Shaiiko” Lebleu dominated the standings in terms of rating and K-D. The Brazilian also finished with the highest KOST in the competition.

Chief to these numbers were stellar group stage results. Both Team Liquid and BDS Esport were the dominant powers in their groups, collecting 15 and 14 points, respectively.

Five Brazilian players finished inside the Top 10, with the event MVP and three other EVPs also from Brazil.

Team oNe’s Juliano “Levy” Andrade finished with a rating of 1.17 and won the former accolade, and was closely followed by his EVP teammate Karl “Alem4o” Zarth.

Team oNe’s fellow finalist Team Empire’s highest-rated player, Artur “ShepparD” Ipatov, only finished in 22nd place with a rating of 1.05 despite a group stage rating of 1.31.

NA’s best two performers both played for DarkZero Esports, with Nick “njr” Rapier and Paul “Hyper” Kontopanagiotis finishing with ratings of 1.22 and 1.12, respectively.

Despite being played just three times during the group stage, Coastline was the most used map during the playoffs with a total of five appearances.

The Brazilians’ record against the other regions during the playoffs in Mexico was impressive: with six wins out of a possible seven, BDS was the only roster capable of defeating a Brazilian team and even that had been an 8-7 win against FURIA Esports. 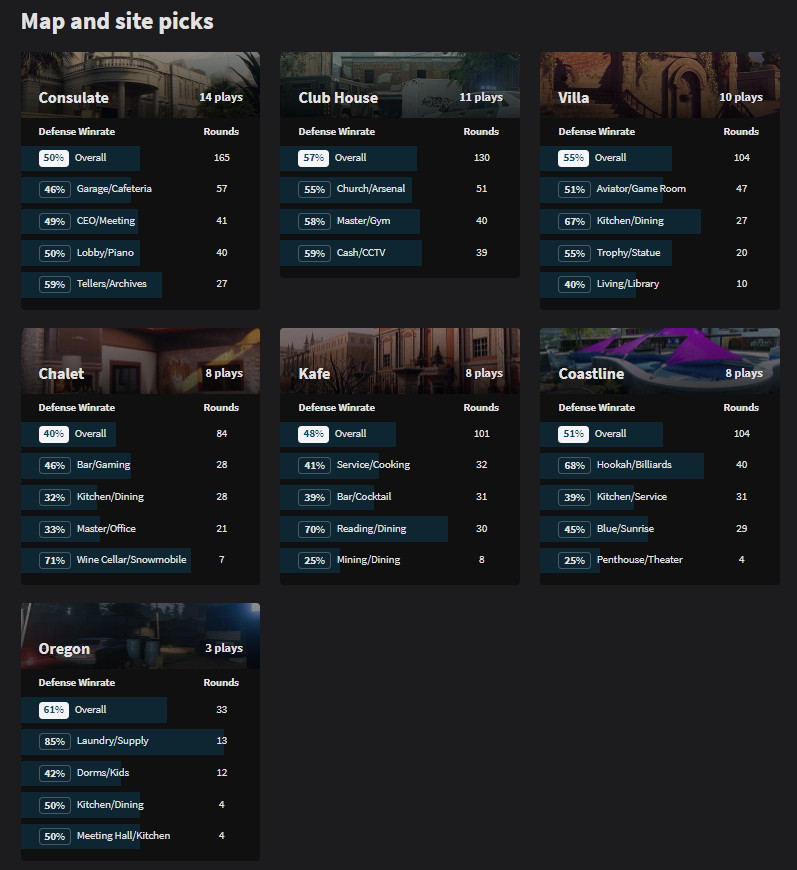 Oregon finished as the least-played map in the pool, with just three games of play. However, this map was chosen as the decider in three of the four matches quarterfinals. Each game finished 2-0.

That marked a huge contrast to SI 2021, where Oregon was the second most-played map. Consulate had been in  fourth place then, but was the most played map in Mexico.