Statistics aren't the whole story, but they help us understand what we see better. Here are some of the most interesting events at the Mexico Major group stage by the numbers.

Editor's Note: The stats compiled exclude DarkZero's 7-2 victory over DWG KIA, which was played offstream. Without a VoD of the match, we have no way to determine accurate stats for the match, and have thus excluded for the purposes of timeliness.

This week, the second international event of the "Rainbow Six Siege" calendar kicked off, as 15 teams met in Mexico City for the Six Major. Now, as the event is halfway done and seven teams have been knocked out, let's look at the numbers behind the winners and losers so far.

Firstly, while many spent the last three days heralding the end of Brazil's dominance, LATAM does enter the playoffs with more teams than any other region with three compared to EU and NA's two and APAC's one.

Perhaps more interestingly is that with the shock defeats of both NiP and CAG, there are more fourth-seeded teams in the playoffs than first:

The only other event to have more LATAM teams in the top eight than any other region was the 2021 Six Invitational where a similar 4-2-2-0 split happened, with APAC getting the short end.

Despite very good performances from iG and CAG, APAC once again enters the event as on paper the weakest region. This is still somewhat of a win, as DWG is the first APAC team to make it to the playoffs in a Six Major event, and only the third APAC team to make the top eight in a tier-one event that wasn't invited directly to. The other two were Fnatic and Nora-Rengo.

Looking at the results themselves, over a quarter of all games (11/42) ended in a 7-4 scoreline while we have yet to have a complete 7-0 blowout so far:

Regionally, LATAM excelled in pressure-filled situations, winning five out of seven of their round 15 games which totaled all of NiP and FURIA's map wins. EU, meanwhile, lost in three 7-8 scorelines, one by G2 against DZ and then by Na'Vi against FURIA twice.

Should these two 8-7 wins from FURIA over Na'Vi have gone the other way, then Na'Vi would have escaped the group in second thanks to a head-to-head tiebreaker, making these two extremely crucial rounds. Not only that, their first meeting ended in a 1v1 win by R4re on round 15.

The tightest two teams overall were undoubtedly oNe and CAG. They tied on points, head to head, map win percentage, and round win percentage, to eventually need an unprecedented tie-breaker match.

Across these three maps, Team oNe's stats were all over the place, while CYCLOPS' GatoRada stood out as the only positive Japanese player by kill-death spread.

The scheduling of this event meant teams regularly played two games in a row, as this is both convenient for the players and helps with COVID-related distancing rules.

We took a look at how teams did during these back-to-back games. LATAM won in pairs, while NA lost their second game no matter the first result:

Looking onwards to the players that allowed these team performances to come true, it's been a really good group stage from BDS.

The French flag-bearers were the only team to have members feature in all five key statistical measures of the SiegeGG Rating, kill/death ratio, KOST, plants, entry differential, and clutches with multiple players featuring in all but the last two:

Paluh, meanwhile, was the only player to top two categories as Liquid and BDS were the two highest-scoring teams in the groups.

Also of note: the players of group C, not featured despite dominating their smaller group. Only Bosco squeezed onto the clutches category as no one player stood out. This is in stark contrast to the NA League stats where Hotancold was the standout player in virtually every metric:

The fairly even team stats has been the case with a number of teams which has led to the most even of player leaderboards ever seen. At the moment, the top 15 players see 12 different teams represented. 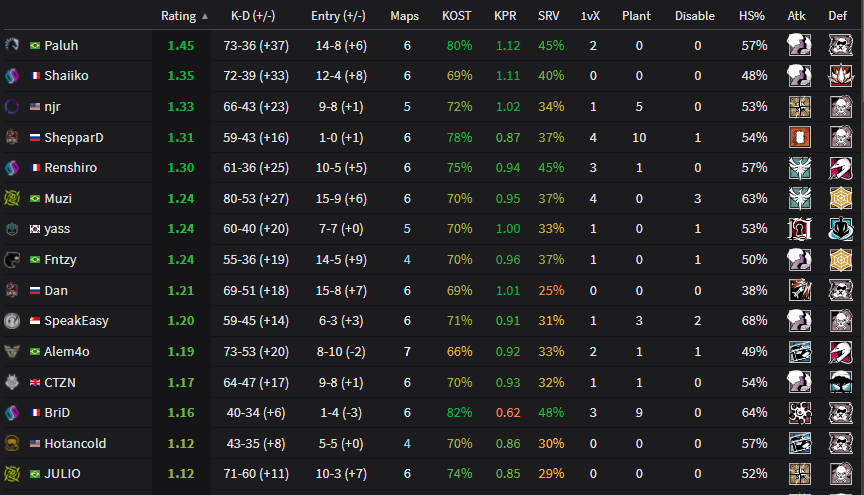 The teams missing are TSM, Na'Vi, and CYCLOPS, with their top players coming in at 29th, 26th, and 24th, while BDS and Empire are the teams with multiple player appearances.

Looking at the bottom of the leaderboard, this pattern doesn't hold at all, with two CAG and Soniqs players in the bottom six and supr right at the bottom with a 0.66 Rating and 18-53 kill-death count.

Now, going into the playoff stage, here are the countries represented:

These five nations are all that's left from the 15 that initially qualified for the event across the 15 teams. This is also the first playoffs ever not to have a mixed nationality roster in the top-eight and the very first time no Canadian players will feature in the top eight of a Pro League, Major, or Six Invitational event.

It's been a pretty big event for Consulate, which has so far has overtaken Clubhouse to be the most played map at the Six Invitational. The biggest change, however, is Oregon which has dropped from second down to last, with Villa replacing it in volume: 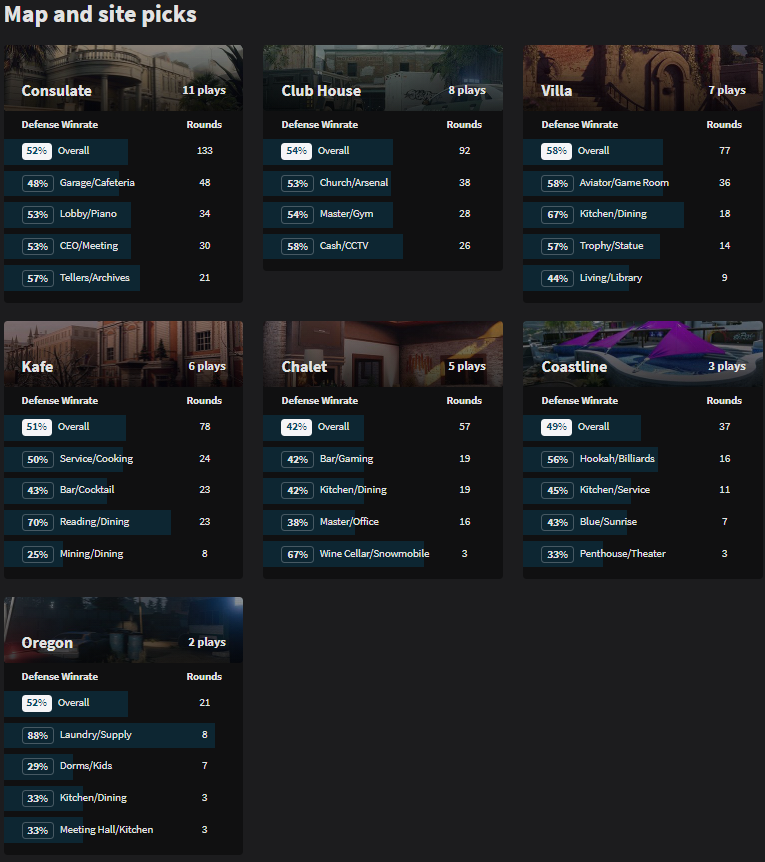 Breaking this down further, here's each region's record on each map:

Finally, looking at each map's balance there are two offense-favored maps, Chalet and Coastline, however, with the exception of Villa and Chalet, the remaining five maps are in effect balanced maps.

Finally, here are all the prior meetings between the remaining eight teams:

Interestingly, across the 28 possible matchups, the only ones that haven't happened before are six involving DWG and a (surprisingly) never-before-seen one between BDS and SSG.

Furthermore, there are only two matchups that have happened before and currently have tied records, DZ vs Empire and SSG vs FURIA, creating another set of key possible meetings.

With the Mexico Major Playoffs kicking off tomorrow, check back here at SiegeGG for the full coverage of the games including news, stats and highlights!