No safety net in Mexico and a 'group of death', but Team Liquid is eager to avenge its SI loss, says Paluh

Brazil may have locked out the Top 3 at the Invitational, but Team Liquid is not content without climbing to the top step once more.

Team Liquid has been losing a little too much for its own liking recently. In the recently-concluded Copa Elite Six, Team Liquid finished third. In the Six Invitational 2021 before that, it finished second. A very painful second.

And there is one major similarity between the two losses -- who it was against.

“We used to have our biggest rivalry against FaZe, but it kind of…” Luccas “Paluh” Molina trails off,, searching for the words that describe the current state of the Liquid-FaZe rivalry. “It still exists [...] like some (trash talk) they say on Twitter... but I think we are building a bigger rivalry with NiP. There’s (a few) games in a row that we have lost to them and we want revenge.”

That Six Invitational 2021 loss had stung worse for two further reasons beyond it being a title loss; Team Liquid had come back from two maps down to a 2-2 scoreline and it had meant that Ninjas in Pyjamas (NiP) -- not Liquid -- had been the first Latin American team to win the world championship.

“Most of our games were really close, some really close rounds decided the match,” recalled Paluh. “In the past we had a lot of training against (their) play style, but we have kind of lost (the solutions) to counter them. But we are trying to work on it… We are doing everything we can to fix it.”

To get to a place to fight NiP, though, Liquid needs to get out of its group first. While that statement may sound ridiculous at first, it sounds a little less ridiculous when realising that aside from Liquid, who is second in the SiegeGG Ranking, Group D features third-ranked TSM FTX and fourth-ranked Team Empire. Then there is one of the biggest wildcards in the tournament: APAC’s Invictus Gaming.

At the Six Invitational 2020, now a distant pre-COVID memory, that was exactly what had happened to Team Liquid. The team had lost out in a group that had featured NiP, Giants Gaming (now Invictus) and MIBR, with its players breaking down after MIBR completed a dominant 2-0 win to send Liquid home.

“I don’t think we have, like, fear, but we need to prepare really well,” says Paluh in response to the group. “They are really strong opponents [...] TSM will probably be the toughest ones to beat, they have really strong players in Beaulo and Merc.” 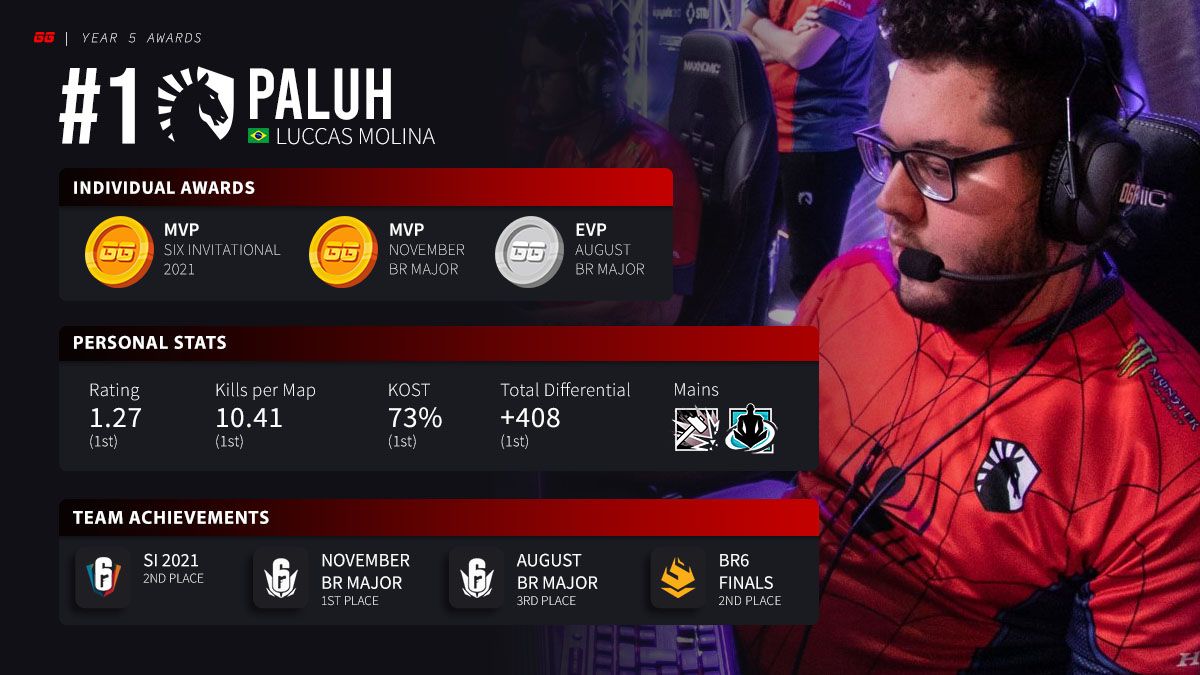 But Liquid has Paluh and André “Nesk” Oliveira. Paluh is impressively very modest about the duo’s eye-popping performances, even after the players had been crowned best and third-best in the SiegeGG Year 5 awards, respectively. His own contributions had included a 10.41 Kills Per Map and a +408 K-D split, while Nesk had had 9.82 Kills Per Map and 187 Opening Kills in Year 5.

That doesn’t mean that Liquid is all about the aggression, though, warns Paluh.

“When you’re trying to clear utility, sometimes you have a gap -- like when you’re throwing a flashbang, there’s a moment where someone can peek you. Most of the time, Brazilians will peek you,” he explains. “But you have to balance your aggression and you can’t peek everything. When you are so aggressive and everyone knows that, it kind of gets predictable. It’ll work sometimes but it’s not the best (for consistency).”

Despite that philosophy, consistency has been arguably elusive for Team Liquid.

Even its run to the grand final of the 2021 Invitational came through the lower bracket. At the Six Invitational 2020, Liquid failed to even make it out of the groups right after it had won the OGA PIT Minor amidst strong opposition. And even recently, Liquid only finished third in the Copa Elite Six despite topping the Stage 2 BR6 standings. But in Mexico, there will be no second chances in the playoffs. To win it, Liquid will need to be at its best in every game.

“We are working on (our consistency). Sometimes we get kind of… lost? And we  need a ‘punch to our faces’ to wake up, you know,” said Paluh. Liquid, he reveals, often needs a ‘wake-up call’ in the form of a near-loss or a loss to keep its overall focus. “In Mexico, we won’t have it, but we are working on it with our mental coach.”

And that work, indicates Paluh, has helped pressure become a non-factor for his team. “We have played many decisive games and we have not been pressured. We just have to play what we worked on.”

One of the things that Team Liquid would have certainly continued to work on would have been maximising the killing utility Nesk and Paluh provide. But while their statistics are impressive enough on their own, Paluh seems to be a special brand of superhuman if this year’s Invitational is anything to go by.

At the start of the Six Invitational 2021 playoffs, he had received news that his 96 year-old father had been hospitalised due to severe pain. While his father had reassured Paluh over the phone that he felt better and that his condition was improving, it had only been to put on a brave face for his son and not impact his mental state and performances.

But just two days later, just as Team Liquid celebrated an emphatic victory over FaZe Clan, Paluh received the devastating news that his father had passed away.

“After that game, when I got the news, I just started crying,” he shares. “I had… maybe half an hour of sleep through the night. But all my family called me, talked to me… They asked what they could do, I even had the chance to travel (back home) the next day, but I knew he wouldn’t want it.

“He was the reason why I had started competing,” recalls Paluh. “Even though he did not understand what I did, he always supported me. He saw that I really wanted (to compete) and he gave me a chance to go, to leave home and join BootKamp Gaming at the gaming house.”

As such, Paluh still walked out onto the stage the next day against TSM.

“I tried my best, but my mind was (scattered),” he reveals. “I was trying to focus on the match, but sometimes some thoughts came and it was really hard. But I did everything I could.”

And that’s where his ‘second family’, his teammates on Team Liquid rallied around him.

“They did everything they could. They said if I needed anything, they would be around for me. They talked a lot with me and supported me,” shared Paluh. “A lot of shit happens around us, we just have to be a family.”

So, is Team Liquid going to take the title in Mexico?

“Of course,” says Paluh, before turning in for the night to recharge for another day of intense practice.

Catch Team Liquid first at the Six Mexico Major against TSM FTX, set to be played on the Rainbow6Bravo Twitch channel on the 16th of August at 11:30 AM CDT (UTC-5).