GSA League Day 5: CTZN Key for G2, Rogue and Secret Back In Top 4

After a brief pause due to the Six Invitational, the GSA League 2021 is back in action. Keep on reading to find out what happened in the fifth week of competition.

It has been almost two weeks since the conclusion of the Six Invitational, but the European teams are already back in action.

While the only GSA team at the event, G2 Esports, disappointed, both Rogue and Secret had even failed to qualify.

However, G2’s results in the German-speaking region have been anything but disappointing. With 10 points out of a possible 12 and no losses to their name, the Berlin-based organisation leads the league with an iron fist.

Meanwhile, Rogue and Secret returned to action this week, with their eyes focused on breaking into the Top 4.

Keep on reading to see who were the standouts in the GSA this week.

While this may not have been a particularly exciting clash initially, interest in this game was certainly intensified when it was confirmed that the UKIN duo of Pacbull and Keenan would debut for Team Secret in the GSA League.

After a rough start on attack in Villa, the European League team faced few problems to close out the game once the teams swapped sides. Both SlebbeN and Hife were the top-rated players on Secret, while Acelele and Ryoo had the best numbers on Ovation.

This result helped Secret break into the Top 4 for the first time this season, while Ovation seems to be falling too far behind their direct opposition for the Challenger League fight. 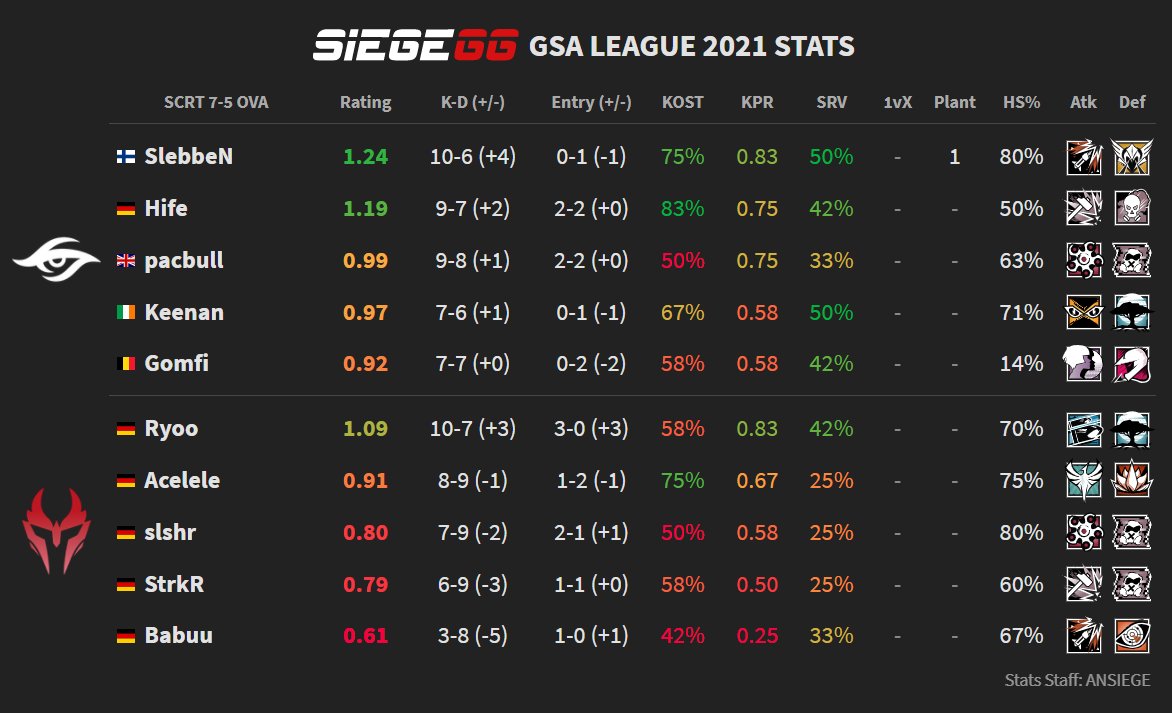 The second game of the day featured G2 Esports in what was their first game since their loss against the North American Challenger League side of Parabellum.

While five attack wins on Chalet seemed to suggest a strong start for G2, three of these rounds had come off the backs of clutches; two by the British player of CTZN and another one featuring Virtue.

Then it was GoSkilla’s turn to catch up on G2, thanks to the attacker-sided nature of Chalet. Despite winning four successive rounds, and being just one round away from leveling the score, four kills by Kantoraketti in Round 10 and three kills by CTZN in Round 11 eventually gave G2 the win.

With a rating of 1.59, CTZN emerged as the MVP of the game again, having secured that merit every time in the GSA to have a 1.50 rating overall in the competition. 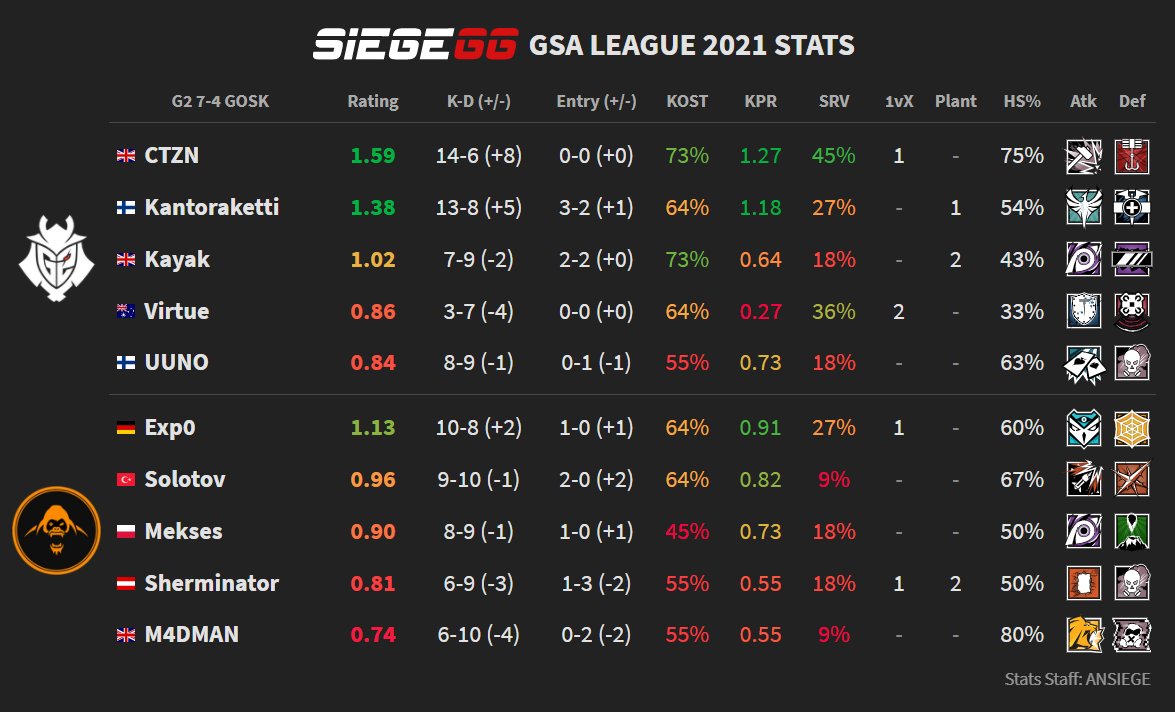 This game capped off yet another impressive display for Rogue, who only conceded two rounds after a 1v1 clutch and a disabled defuser -- both by JJJ.

Rogue’s standout players were the German duo of AceeZ and Cryn, as well as the British player of LeonGids. Cryn, in fact, finished the game with a KOST of 100% and 13 kills in the mere 9 rounds played, while LeonGids clutched once and planted the defuser twice. 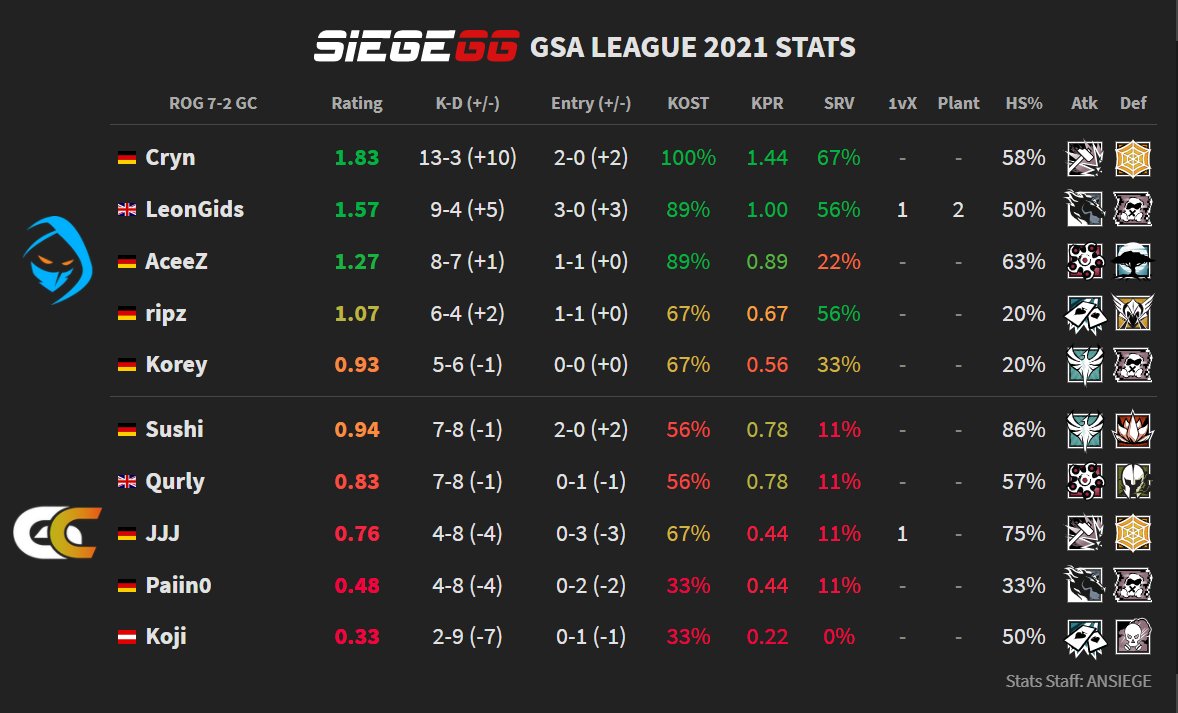 Looking at the map and how the scoreboard looked after the first half, some viewers may have tuned out thinking that PENTA would eventually get the three points.

Playing on Kafe, the Turkish roster won four rounds on attack, mainly thanks to Levolution’s impressive plays with Ash. Moreover, PENTA won their very first defence, which gave them a rock-solid 5-2 lead.

But Zenoxo and Gisela led the charge for SSP and the German roster forced the overtime after winning their two last attacks. The team kept up the pace during overtime, taking the first two rounds.

With 16 kills each, the aforementioned Zenoxo and Gisela were pivotal in a very important game for their Challenger League aspirations. 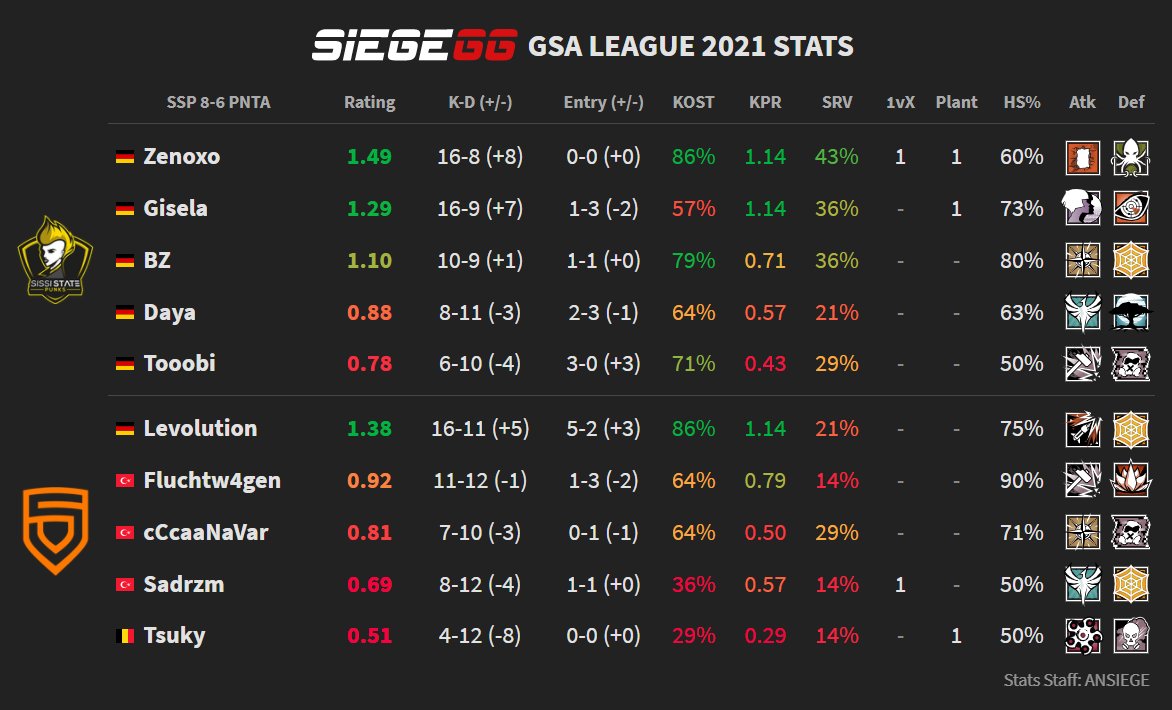 After this week’s results, the GSA table looks just like everyone expected at the beginning of the season.

For the first time in this edition of the GSA, the three European League sides are in the Top 4, while SSP joins them in second place as the favorite to take the Challenger League spot.

However, with PENTA two points behind and GoSkilla three, the competition for the Challenger League ticket is far from over.

Furthermore, there are only two points between the sixth placed team and Secret, who are currently third, with their Top 4 hopes still in question. 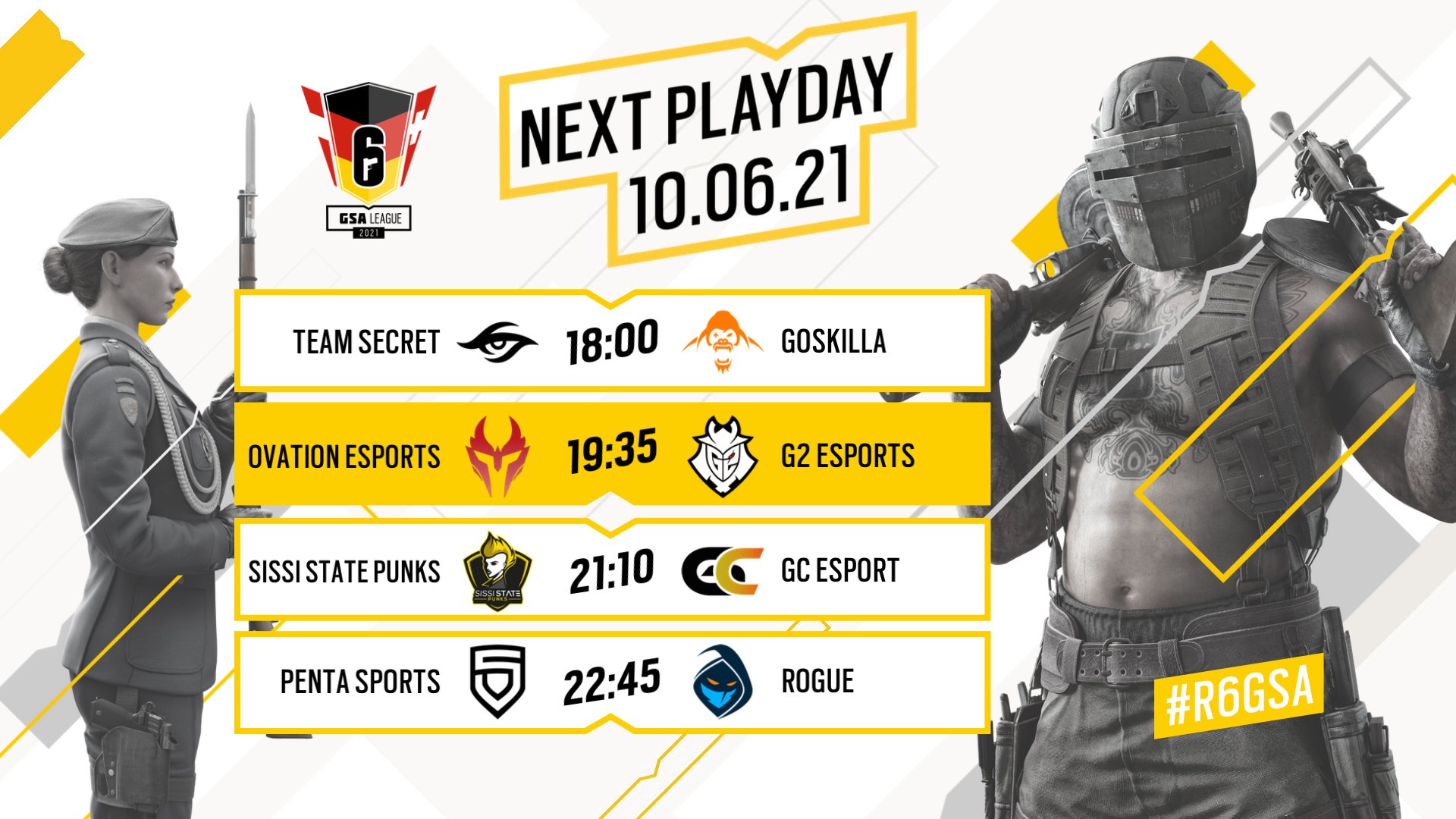 This week, SSP have the chance to win three pivotal points against the current bottom team of GC Esport. Meanwhile, the current leaders of G2 will face Ovation, who currently sit in seventh place with only three points.

The two other European League sides will feature against the two Challenger League candidates of GoSkilla and PENTA, with easy wins expected for the top-flight teams.