Group B Zeros to Underdog Heroes: Why P3NGU1N Believes Parabellum Can Win it All

Few would have expected Parabellum Esports to be at the top of Group B after a shocking Day 1. But their climb back up, as P3NGU1N told SiegeGG, has given them newfound belief.

When Parabellum had flown into Paris for the first Invitational not on Canadian soil, few had been expecting them to walk away with even one victory.

In his pre-event interview with SiegeGG, Xavier "Eskaa" Avoine had expressed faith in his team, stating, "people will probably underestimate us, but that's on them and we'll make sure to prove them wrong".

Many fans disagreed with Eskaa's rating of his own team, with some going so far as ridiculing Parabellum's chances at the Invitational. And, after an opening day 7-0 battering by Oxygen Esports and a dominant 7-3 loss to MKERS, it seemed that they were right.

But it was on their second day that Parabellum turned on the style, taking down both Six Invitational 2020 finalists, Ninjas in Pyjamas and Spacestation Gaming, and then the similarly resurgent Giants Gaming. Suddenly, the Canadians sat atop Group B. 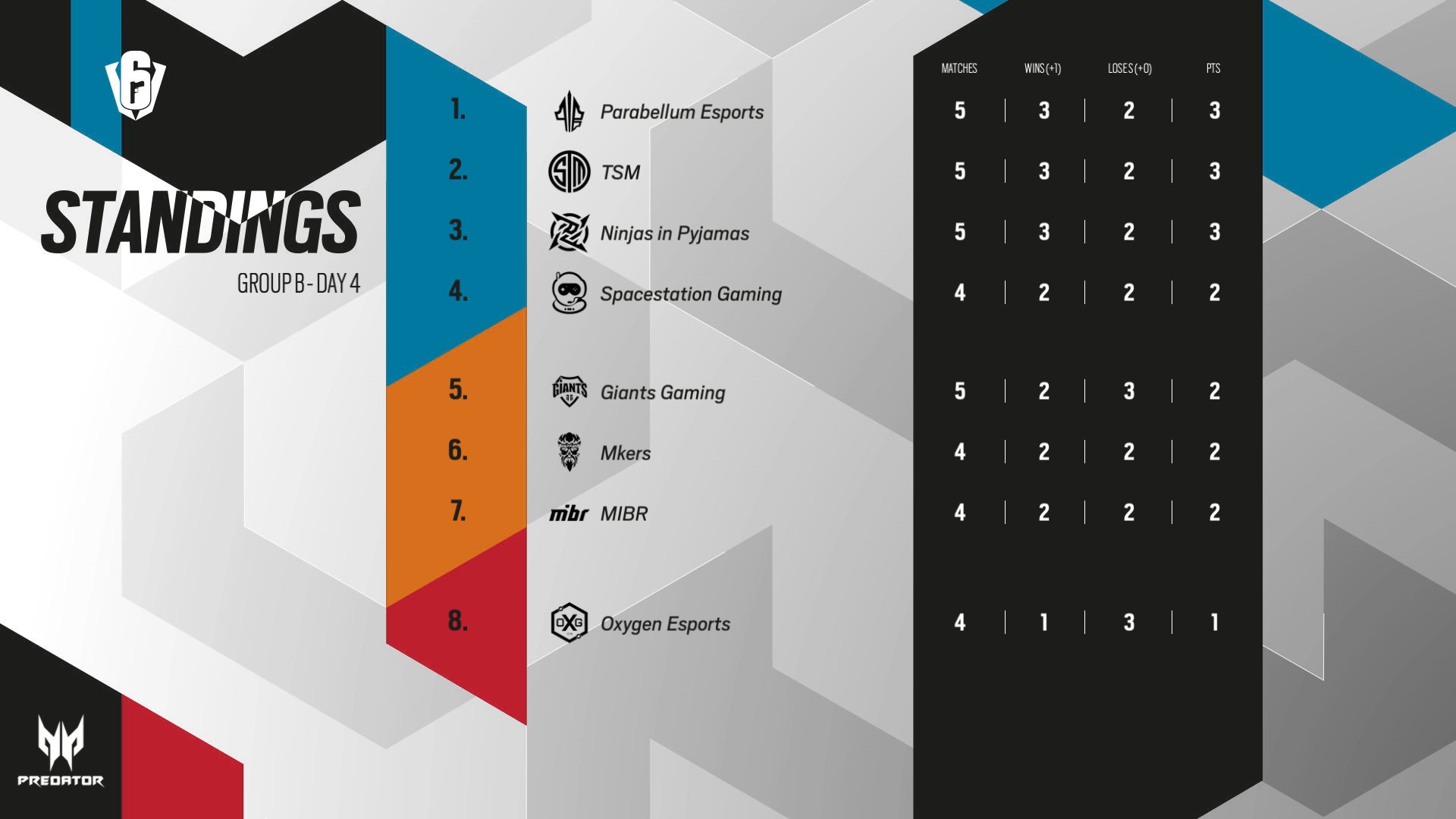 Keagen "P3NGU1N" Smith revealed that the team had initially simply been focused on regaining the synergy with Logan "Sonar" Parker and Brandon "Euphoria" Sathongnhot again, with the two players having been earmarked for the Six Invitational but not having been playing in the Challenger League.

Of course, the roster change had also been accelerated and made permanent after Loïc "Luiz" Langlais had been banned for cheating. Not only that, coach Matthew "Okward1HP" Smedley had been suspended in April after "inappropriate comments" to a minor.

And this is not forgetting the mental shocks delivered by the dissolution of the Canadian Division, switch of former organisation Altiora to the North American League (but without this Canadian roster that would become Parabellum), departure of Altiora from Rainbow Six entirely, and doubts over their Six Invitational and Challenger League spots.

"Since we began playing in the Canadian Division, we have scrimmed NA and LATAM pretty consistently," revealed P3NGU1N, with on-site preparation for the Invitational involving practice games with as many European and APAC teams in Paris as possible.

Ironically, given the Day 2 results, P3NGU1N shared that the Parabellum roster had learnt the most from practicing against Ninjas in Pyjamas, especially when it came to dealing with different play styles and more aggressive players.

P3NGU1N did say, however, that the adaptability demonstrated in-game on the second Group B play day is "natural" to the team and not something that had to be drilled in, as is the case for many top-flight and lower tier teams.

"It wasn't that [the adaptability] was not working the first day, we just weren't showing it the first day and we were playing really scared," he continued. "But the second day we made lots of adaptations, lots of changes. I mean, we played Oregon twice and did not even have close to the same operator bans."

Despite that, as P3NGU1N stated and as everyone witnessed, the team was unable to perform on the first day.

"We had a plan, but playing on LAN for the first time and playing super high stakes (games), there was a lot of pressure. I think the first day of play, we were playing extremely scared," he shared. "We were just letting them do whatever they wanted to us."

But, in hindsight, he did admit that the 7-0 loss on the first day turned out to be a blessing in disguise.

"It kind of let us be like, 'oh, we can't do worse, so let's just have fun and play the game'," he said. "It got rid of all the nerves, because we could not have done worse after that."

And as such, coming into their second day and up against the runners-up and world champions from the 2020 Six Invitational, they were hardly overawed by the occasion and gravity of facing those teams.

"We kinda just went in and played and it worked out," said P3NGU1N, perhaps with a hint of a smile coming through the call.

"All of us thought, realistically, we could get Top 4," he continued, about his team's chances in the remainder of the grouo stage. "But, obviously, going into the last play day, we were not expecting to be first place in our group."

That table-topping performance saw P3NGU1N also take down his idol, two-time world champion Troy "Canadian" Jaroslawski, which he described as a "surreal experience" when the reality of Parabellum's 8-7 win had sunk in. And, as he spoke about that to SiegeGG, the excitement in his voice was unmistakable.

"I think OxG was definitely the toughest game, overall, but I think I would go with Spacestation Gaming (SSG)," he said. "SSG have a really good counter-game, which makes it really hard to play."

But the focus is now firmly on the final two back-to-back games against MIBR and TSM.

"Now, you could say that we have something to lose, but it's not something that is weighing on us very much," said P3NGU1N. "There's not an expectation that we need to win every single game we play -- and there never was."

"But, I truly believe that if we play the way we played [on the second day], we have a really good chance of winning this entire event."

Despite that unassailable self-confidence, though, he is not ignorant of the fact that the Best-of-One group stage format and a relative lack of Parabellum games for opponents to study have been factors in their second day performance. But the confidence still shines through.

"I truly think that the way we played in the games we won... we would have been able to carry [the momentum] into a second map in a Best-of-Three," he said. "Now, it's going to be a bit more difficult, but I don't think it will be too much of a difference."

Another reason for the confidence is the new Parabellum analyst, Varun "VBM" Bir Mohindra, who was signed on a trial basis a few weeks prior to the Invitational.

"He keeps the basic stats, such as opening kills, what time the kills happen, what is our best map ... but he also does a lot of analysis on other teams," he said. "He tells us  'these are their drone placements, these are their operator lineups, this is how they play and this is how we can counter it'."

"There was one round against OxG ... Yoggah always walks down Freezer Stairs on Oregon, so we sat three people (at the) bottom of the stairs and waited for him to walk down."

VBM, he says, essentially helps with lifting the mental load of the players greatly, picking up on patterns that they would otherwise have to study and find themselves. Now, with VBM on board, they can focus more on playing the game itself.

"It's definitely really weird," said P3NGU1N. "But it's cool to us. There were a lot of people who said 'they don't deserve to be here, they're a really bad team'."

"But some of these people have never played in an Invitational, so to them I say, where are you?"

Parabellum now gears up for its final two challenges in the group stage, with the MIBR game scheduled for 9:30 AM ET (UTC-4) and the TSM one for 11 AM ET.