After a pause produced by a confirmed case of COVID-19, the GSA League will have not one but two game-days this week. Keep on reading to not miss any of the action.

The GSA League saw a very entertaining first week of German Siege, with G2 Esports beating Team Secret thanks to an incredible performance by Ben “CTZN” McMillan. However, the currently most-feared situation in esports happened after the first game-day of action: a COVID-19 case was confirmed amidst the production crew.

GSA’s official Twitter account made it official on the 15th of April, which would eventually pause the league for at least a fortnight.

Some days later, the same Twitter account posted an updated schedule for the league, squeezing in Day 2 and Day 3 on the 27th and 29th of April, and Day 4 on May the 4th, with no matches until after the Six Invitational.

With eight matches taking place this week, let’s have a look into the first four that were played on Day 2, where we saw some very interesting results as the European League sides were up against the wall.

Day 2 started with Ovation’s debut in the GSA, as they had signed LFO’s roster on Monday.

However, the players could not deliver a good performance as they were sent stumbling by GoSkilla. Led by Mekses and Exp0, the GoSkilla team took the game rather comfortably on Clubhouse.

Although things seemed evenly-matched after the first half, where Ovation had won three offensive rounds, it was the GoSkilla show when the teams swapped sides. The previously mentioned Mekses was pivotal in their win, as he finished with a KOST of 100%. 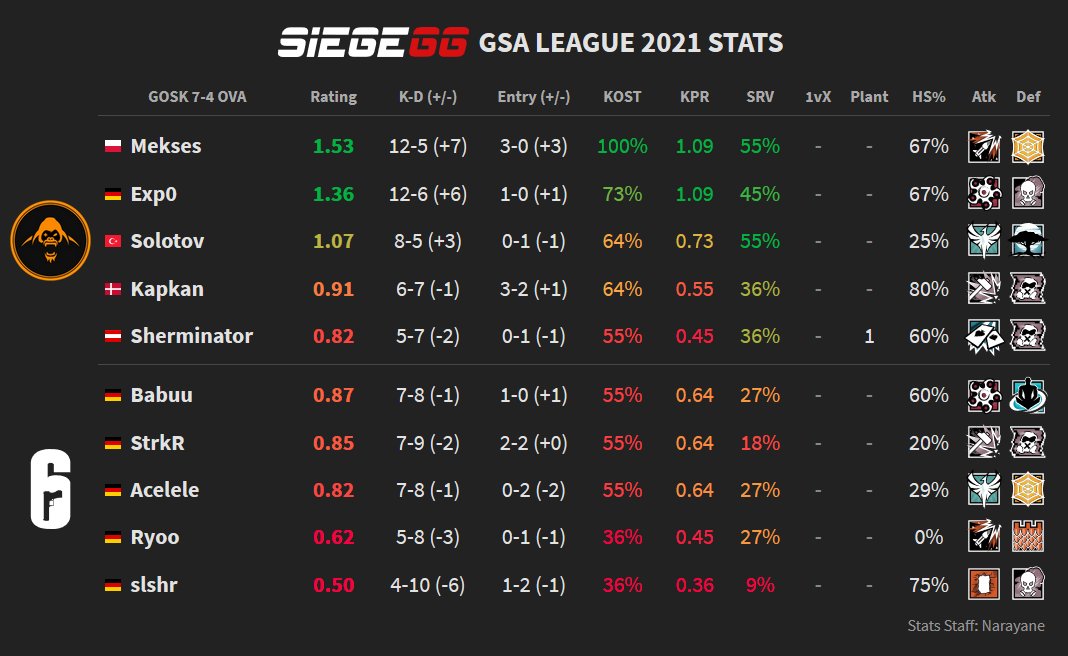 Meanwhile, no player on Ovation finished with a positive rating. Overall, two impressive individual performances in GoSkilla gave them their very first win in the GSA after their initial loss against Rogue. And that leads us to the second European League team’s game in the German competition.

Rogue’s start to the game was a rock-solid one as they quickly won three of their first four defences on Consulate. Nevertheless, two clutches from SSP not only equalised the score, but also gave them the lead.

First, Gisela won a 1v2 situation in a round that had looked impossible for the attackers, as Rogue got two early kills. This was followed by another clutch after the role swap, this time by Tooobi, giving the 4-3 lead to SSP.

Rogue would equalise in Round 10, thanks to an AceeZ quad-kill, but SSP were not done and two successful defences in Garage and Lobby secured them the win. 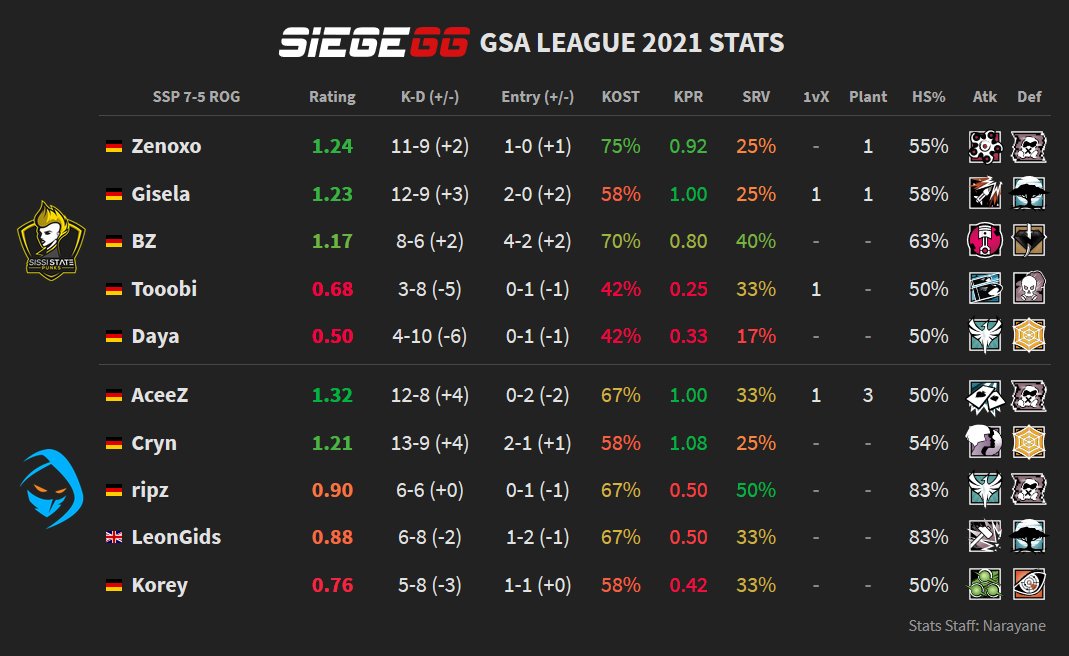 Just like in Day 1, BZ and Gisela were key players in the game. This time, they were also joined by Zenoxo, who was the top-rated player in the team. Meanwhile, AceeZ and cryn were the best players on Rogue, albeit in a losing effort.

The second upset of the day would come right after, with EUL’s Team Secret cleaned up by the now-Turkish PENTA roster.

The game started off explosively as PENTA won the first four rounds, with Fluchtw4gen their stand-out player thanks to two double-kills and one triple-kill. Tsuky was also a vital player, as he secured the fourth round for his team after a 1v1 against Prano.

But then, the momentum reversed. Team Secret finished the first half with two offensive rounds in their bag, which were followed by two successful defenses. The scoreboard went from a 4-0 lead for PENTA, to a 4-4 draw.

But, just like a pendulum, what went up for Secret had to come down. PENTA looked like a completely different side from Round 9 onwards and won the remaining three rounds while conceding only four deaths.

The stats were clear on just how much better PENTA had played, as everyone on the team — except for cCcaaNaVar — finished with ratings over 1.23 and at least 10 kills. Tsuky’s performance was the best, as he managed to finish the game with a KOST of 100%. 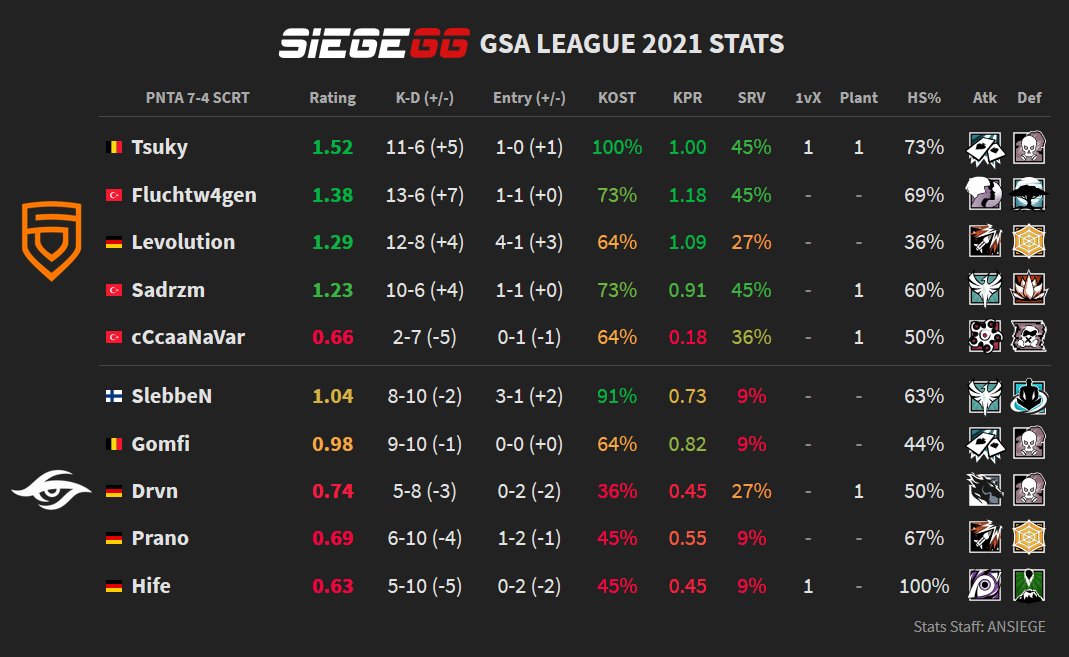 The last game of the day saw G2 Esports facing GC Esports on Villa. While their names were similar, there would only be one winner.

G2 delivered us one of their typical performances in the GSA League, as they used infrequently-seen operators such as Kapkan, Alibi, and Rook. The strategy seemed to work, as the European League team were 5-3 up after the first eight rounds. However, the tables would eventually turn.

Three consecutive rounds for GC Esport put them on match point instead, but G2 Esports responded with a flawless round to force overtime.

But, things started in the worst way possible for G2 in overtime, as GC were the side to defend twice, which has usually given teams a serious advantage on Villa. A SushiTheMonkey triple kill gave GC Esports the initial lead on the scoreboard, however a double by Virtue and a triple by Kayak evened things out again.

With a 7-7 draw on the scoreboard, there was only one person who could save the game. (If you are a BDS fan, you already know.)

Virtue, with only 20 health points to his name, was left alone in a 1v2 clutch with just 10 seconds remaining. Unexpectedly, the Aussie completed the difficult task and gave G2 another win in overtime, a fitting ending for such an evenly-matched game.

Despite the Aussie’s importance to the win, it was CTZN yet again who was selected as the player of the match. However, this was far from his 2.20-rated game against Team Secret which he delivered on the first day of the competition. 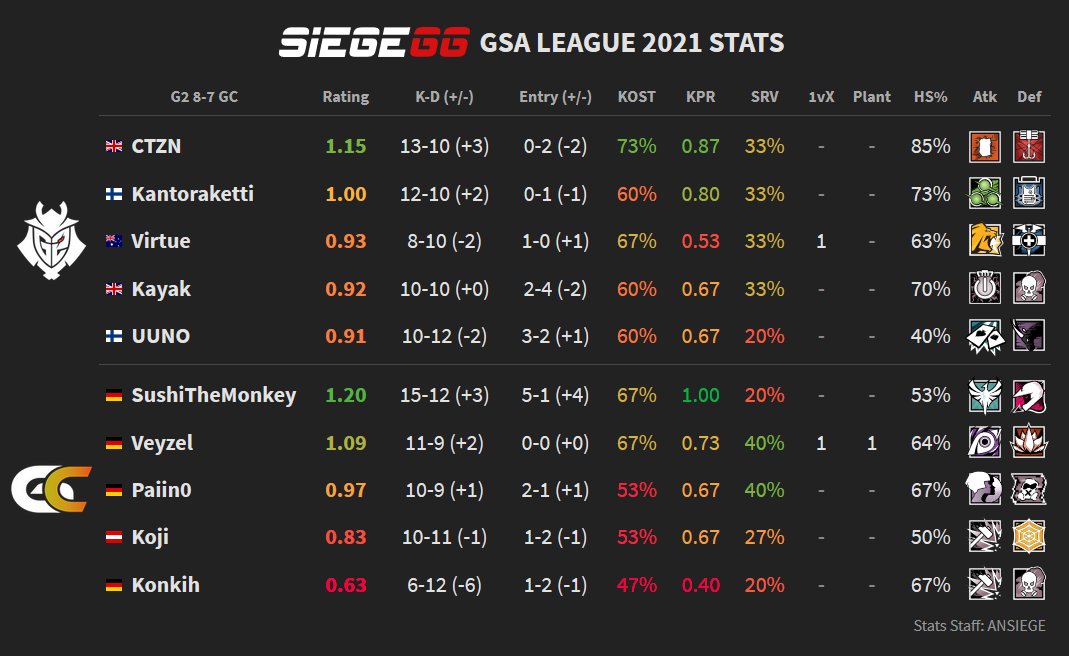 Due to the previously mentioned COVID-19 case, the GSA League will have Day 3 played tomorrow and a final play day before the Invitational on the 4th of May.

G2 Esports will face PENTA Sports in what will be a special match, despite only Kantoraketti remaining from PENTA’s roster.

Sissi State Punks will face Team GoSkilla in a very interesting game in a possible fight for the upcoming edition of the Challenger League, while Team Secret will face GC Esports in an attempt to get their very first win in the competition. The clash between Rogue and Ovation will be the last game of Day 3.

In order to not miss any of the action, make sure to tune in to the GSA’s official Twitch channel.