With the sixth week of the $308,000 Japan League complete, here's a rundown of all the action so far.

Read on to find out what went down in the sixth week of play from the best in Japan.

The weekend started with the struggling GUTS Gaming roster face Crest who sat two points ahead of them in what turned out to be a slog of a match.

Starting on Consulate GUTS initially went up due to multi-kills from Li9ht and Lily before a five-kill round and a 1v1 from Eclair over Lily allowed Crest to keep the game even. As they went onto attack both teams won three rounds in a row to take the map to overtime before, finally, Crest pushed ahead once again to win 8-6 with a 4k from Ruruta ending round 14.

Next up, Crest's pick of Villa where after an initially successful defensive half, Crest once again pulled it back to 3-3 with Wh1skey securing a 1v1 4k on Dokkeibi to put them at the advantage. Nevertheless, GUTS' attacks were really solid eventually winning the map 7-5 with a 4 attack wins on the notoriously defender-sided map.

Finally, the game was then decided on Chalet. GUTS had played it once before where they had defeated FAV while Crest had beaten both REJECT and EVA:e on the map but lost it in overtime against CYCLOPS. This showed both teams were capable here as they proved throughout.

Throughout the first half, the two teams were tied with star plays coming from the Twitch of Ruruta and Yura on Wamai. This changed as GUTS started attacking with them winning a number of close rounds as a 4k by Lily put them onto map point at 6-4. Crest cam,e back into it before, finally, GUTS ended the series as Yura secured their fourth quad kill of the map on the final round. 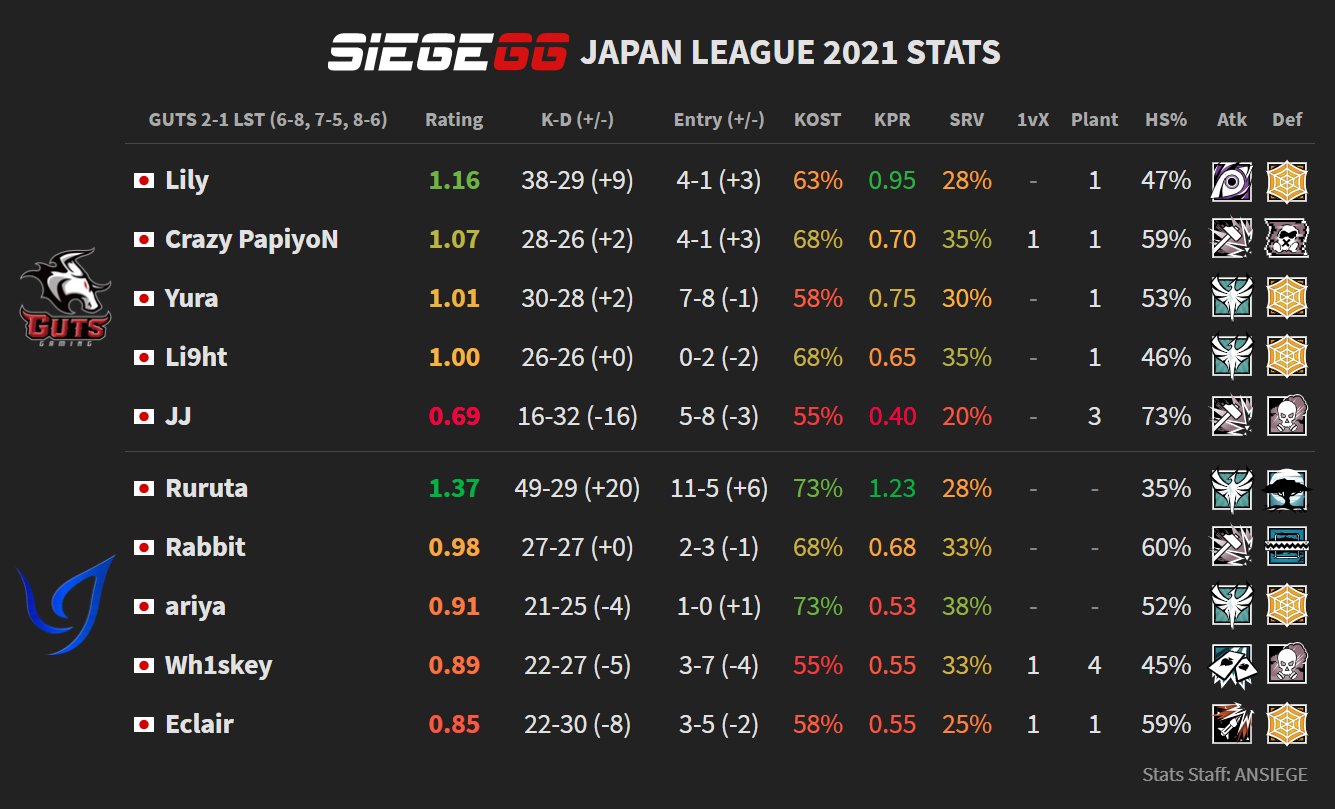 After these three tight games, the fourth map of the night, Consulate, was also a doozy.

The opening round straight away saw a 1v2 from SIFTY for EVA:e before two rounds later Sengoku's Yahoon got a clutch of his own in two rounds key to the eventual half finish of 3-3. While the game remained even through the second half also, this was entirely due to individual plays from Sengoku including 4ks from febar and A1kyan as well as a 1v4 clutch from ReyCyil on Echo.

Finally, in overtime, the game went to round 15 and ended with a ReyCyil triple kill on Maestro to win their own map pick.

Next up, Coastline that saw EVA:e ban Lion, something we rarely see in recent seasons. Here Sengoku on attack went up 4-0 before Maavi shut down febar's ace attempt in round five to an eventual 4-2 half. Sengoku won two quick attacking rounds making it look like a close battle before Sengoku ended it flawlessly two rounds later at 7-4 to take the series. 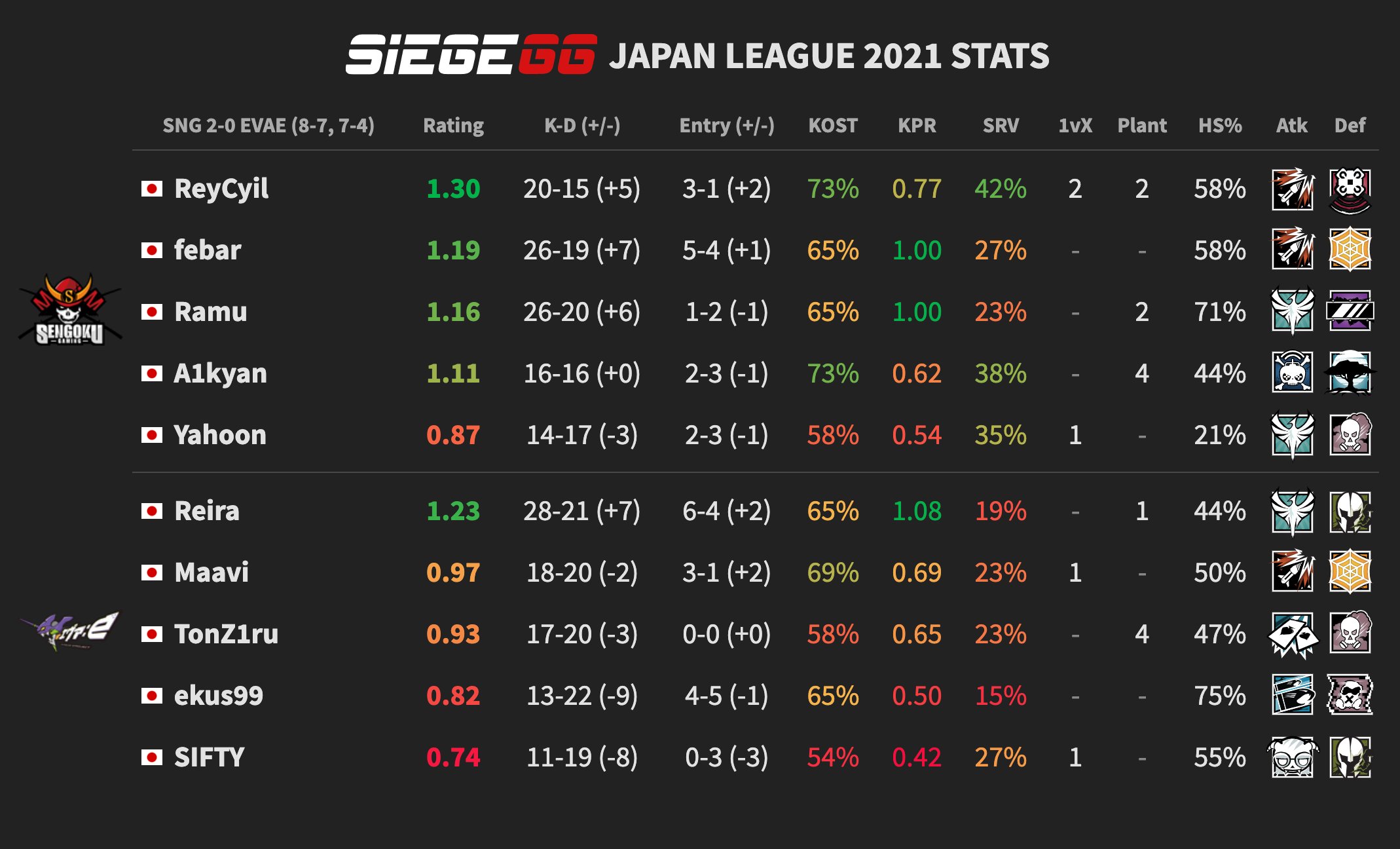 Onto Sunday in which the sixth-placed Northeption roster had the unenviable matchup against CYCLOPS.

This game was somewhat of a walkover for the pro team as despite being held to a 3-3 defensive half on Villa they then came out really strong on the attack. Three rounds in a row were interrupted by a single additional Northeption win guided by a retake from Sekiheki before they then flawlessly took the Aviator/Games Room site to win Villa, 7-4.

With that win already secured, next up was CAG's pick of Consulate in which Northeption won a CEO retake on round two and nothing else. Other than that round, the closest came on Northeption's Garage defense on round five in which BlackRay secured a triple kill, got the plant down, and won a 1v2 while playing Nokk.

Eventually, CAG took the map 7-1 and so the series 2-0 to keep their undefeated streak going across six games with just REJECTS left to face. 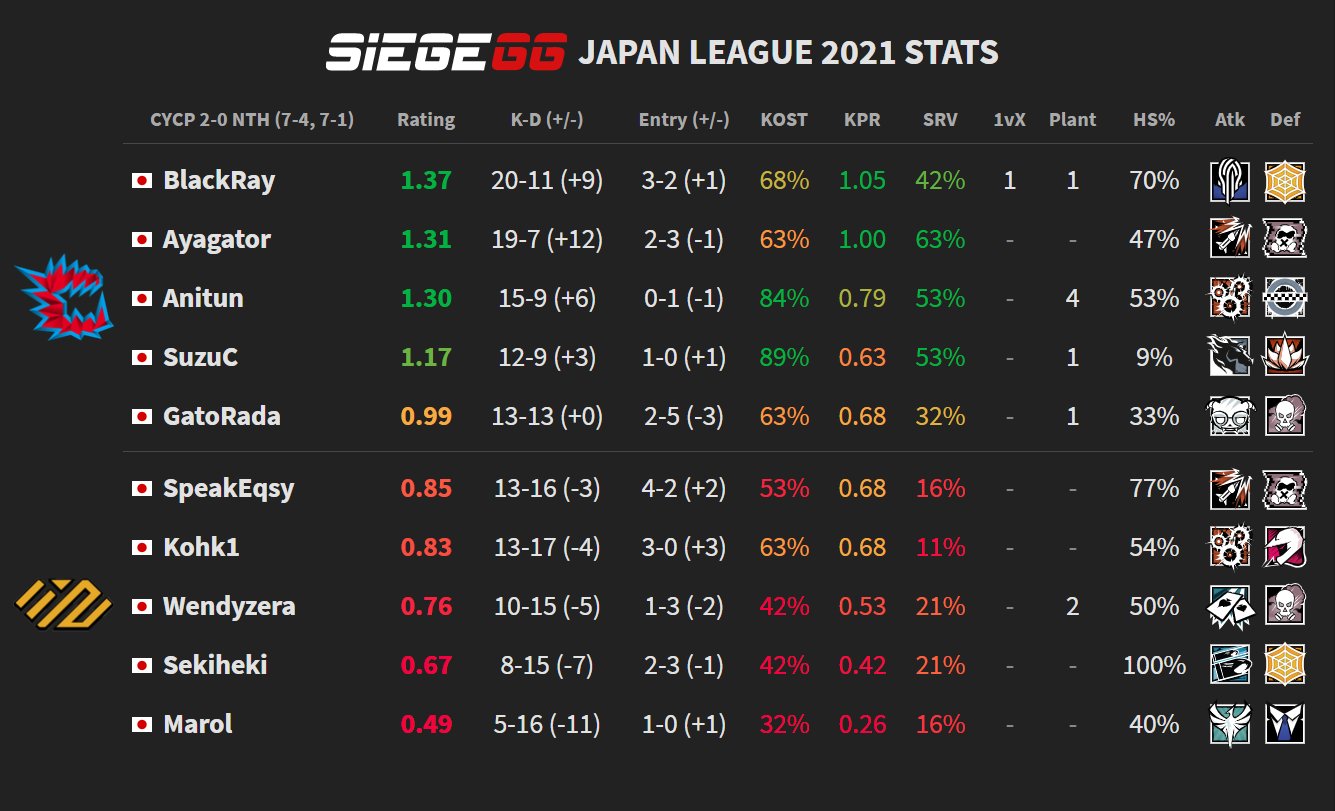 Finally, FAV faced REJECT in a much closer game.

After going ahead while defending Oregon, REJECT then lost their initial lead as FAV won two clutches; a 1v3 from No2 and a 1v2 from ShiN to tie up the half. Two rounds later No2 added to this count with another 1v2 victory before a four-kill round nine put them on map point. While REJECT attempted a comeback then ended just short at 7-5 with every one of those clutches making the difference.

Coastline next which once again saw an initial attack advantage move towards the defense. The two teams tied both the first and second half putting the game into overtime. Here on round 15 the map ended in a 1v1 between Window and Taipon in which Window won for REJECT by staying alive with the defuser down while Jager ran out of time to defuse.

Finally, the game ended once again on Chalet. Once again the two teams were neck and neck for the first half before No2 from FAV forced a lead with a quadruple kill on round eight. Taipon added to this with the fifth and final clutch of the weekend before the game ended 7-4 to give the series to FAV gaming. 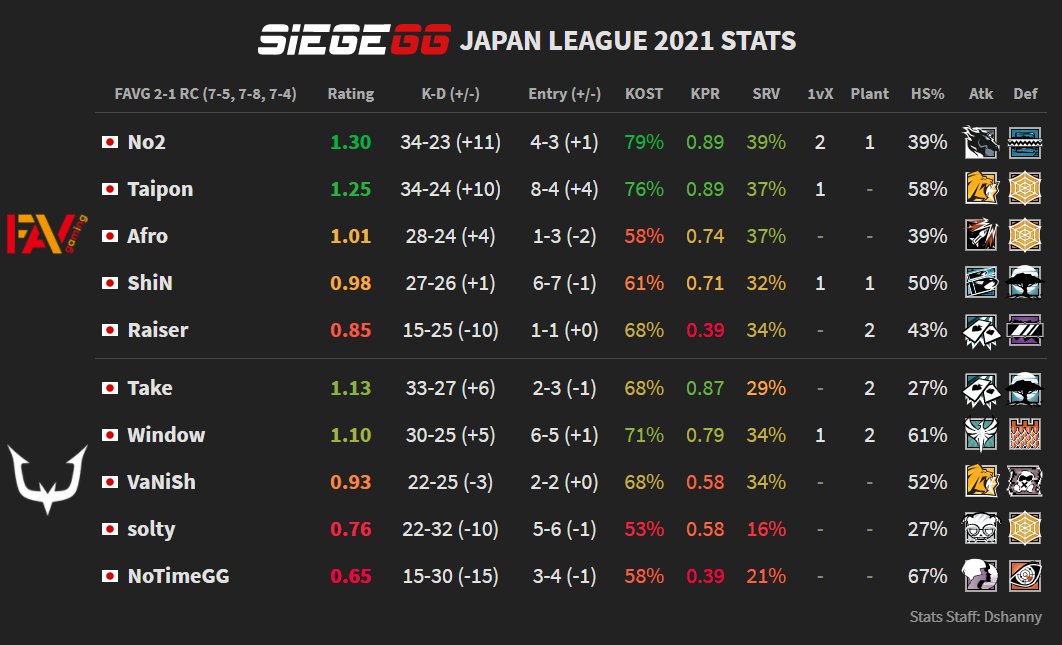 With the APAC Playoffs this coming weekend there is now a seven-week break before play days 13 and 14 of the Japan League. When the tournament returns we'll see the final remaining matchup of the first run in the double-round-robin league as CYCLOPS faces REJECT and FAV plays Northeption on Saturday while GUTS meets EVA:e and Sengoku play Crest on Sunday, all on the Rainbow6JP Twitch channel.

These games will take place after the Six Invitational and subsequent transfer window meaning this will likely be the first chance we get to see a number of fresh pickups in action. 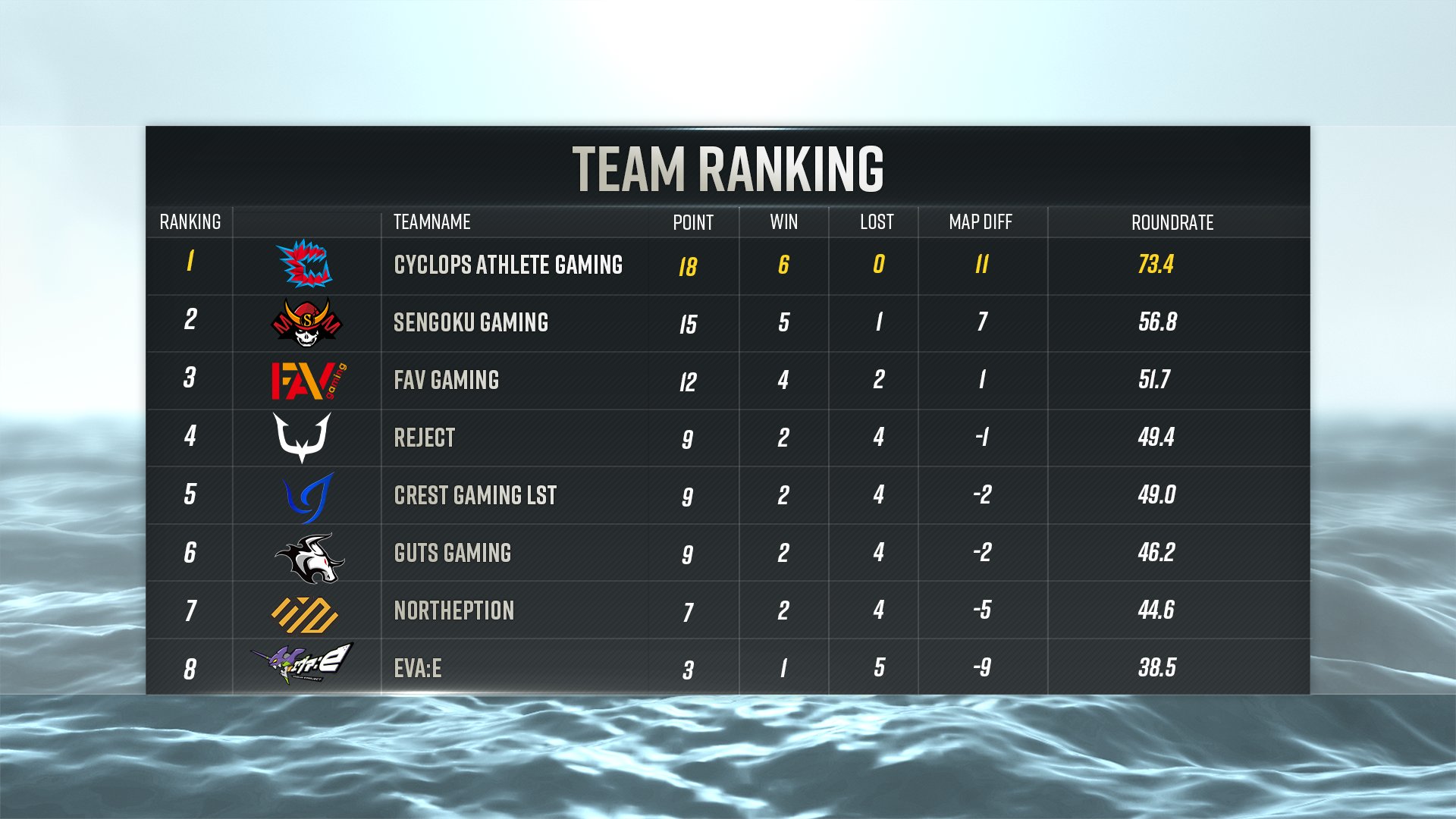