The title of 2020 Japanese champions and a spot in the APAC North relegations is on the line this weekend as the Japan Championships come to an end.

Japan’s national-level tournament, the Japan Championship, which started in last month and boasts a massive $140,000 prize pool, is finally all coming to its end this weekend as the top eight teams fight for the money and for a spot in the APAC North Relegations.

The tournament was split into three phases, the first of which kicked off on September 19th. Here, 191 teams were split across eight double-elimination groups with the top two in each making it through. While all the big teams did get through this phase, there were a few exceptions.

Most notably, Nora-Rengo exited their group as second seeds after losing to the rather obscure lineup of eva:e, while the two locally well-known rosters of SIRIUS Gaming and Fathers' Back -- the latter of which was an Pro League lineup and has the ex-CAG player of Shokei -- both finished third in their group, leading to their early exits.

These 16 teams then joined four invited lineups -- CYCLOPS, FAV, and GUTS from APAC North, and the Japan Nationals winners of Team Northeption -- in Phase 2 which was split into four groups of five.

Once again a lot of the big names breezed through the bracket, but due to their second-place finish during Phase 1, Nora-Rengo met and was eliminated by FAV Gaming. As such, they will be a major omission from the finals.

As well as this, eva:e -- the team which initially bested Nora-Rengo -- surprised many by defeating Northeption to top their group and enter phase three, the finals, as one of the top seeds.

And so for Phase 3 of the Japan Championships, the eight remaining teams travel to Chiba just outside of Tokyo to compete in the first R6 LAN Finals since the COVID-19 pandemic took hold last April. Starting with the best-known teams, competing in the tournament will be:

The first of three APAC North teams at these finals, FAV Gaming is a very well known team in the region. The core of Taipon, Afro and ShiN have been playing together since mid-2018 while their newest additions of No2 and ChloroForM have been standout additions with them sitting as the third and eighth highest-rated players in APAC this stage.

Since the decline of Nora at the beginning of 2019, CAG has been quick on the rise to replace them as the top team in Japan. As well as attending the Raleigh Major, CYCLOPS was also the top Japanese team during Seasons 10 and 11 and won the last Japan Championship in March cementing their names as titans of the region.

More recently, CYCLOPS finished the last mini-Major in third place behind just C9 and Giants and is currently the only team to have bested Giants Gaming this stage with them taking them down 7-3 on Villa just yesterday. This all positions CAG as the team to beat at this tournament with their opening game against Northeption being one to watch.

The final pro team here is GUTS which out of the three has still yet to prove itself. The team finished Season 11 in fourth and crashed out of the Japan Nationals in the quarter-finals with their best performance to date coming with a fifth-place finish at the mini-Major thanks to a 8-7 win over FAV Gaming.

Now with the ex-FAV player of shu joining the team at the beginning of the stage to replace JJ, the team has dipped down to eighth during phase one and currently sits down in ninth during phase two of Stage 2 as the team will desperately be looking for a chance to prove themselves at a tournament as big as this. 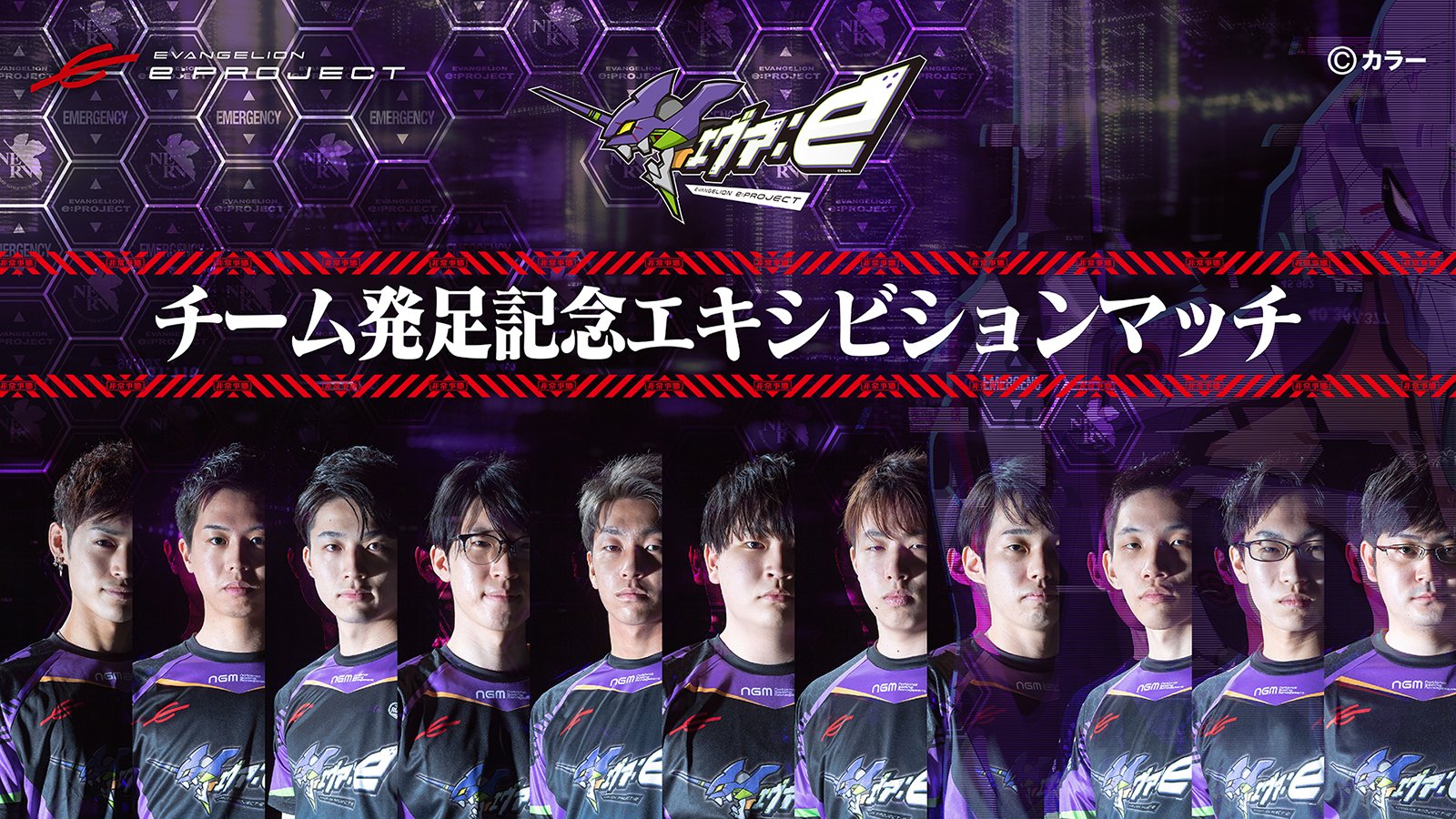 While largely unknown, this team made a statement by defeating Nora-Rengo during phase one of the qualifiers (7-4, 1-7, 7-4) before then taking down the up and coming team of Reiwa Gaming and the Japan National champions of Northeption to top their group during phase two of qualifiers. This all puts Eva:e as a serious outside contender for both the Championship title and, more importantly, the coveted spot in the APAC North relegations.

While most the team are new players breaking into the top flight, the obvious exception here is the ex-Nora player of Riku "Maavi" Kaizo who will be eager to get back to the top flight after being dropped from Nora in favour of SouLBoi after five months on the team.

This move came following claims that Maavi never received his share of the Pilot Program money owed to him by Nora which, if true would add a new dimension to Eva:e's prior victory over Nora and add further stakes to a possible meetup between the teams in the APAC North Relegations should Eva:e get that far.

Above: The Japan Nationals 2020 Grand Final, where an in-game error let Northeption get the series-winning kills even though they had lost the round and map.

The reigning Japan National champions will have a very rough campaign if they hope to retain their title as they'll likely have to beat both GUTS in the quarter-finals and FAV in the semi-finals before a grand-final meetup.

The team, however, does come with an awful lot of talent with Aroer1na having previously played at the 2018 Six Invitational for eiNs, amenbo previously having coached FAV Gaming, febar having played in the Pro League for three seasons on DetonatioN Gaming and SpeakEqsy (not to be confused with the Giants Gaming player of SpeakEasy) being seen as one of the best up an coming players in the APAC region.

The two names which will likely standout in this roster is another ex-Nora player of ReyCyil who was a part of Nora's golden year between the Season 7 and Season 9 Finals and another ex-eiNs player of prototype_1z who attended the 2018 Six Invitational. These two players led three newbies all the way to the semi-finals of the Japan National tournament with the team then earning an invite directly to phase two due to their prominence.

While this all sounds great for Sengoku, their opening game will be against the tournament favourites and current best team in Japan of CYCLOPS which will be a very big hurdle to overcome. Should they take down CAG, however, they will not need to face another pro-tier team till at least the grand-final likely guaranteeing them a spot in the APAC North Relegations.

Both these teams are made up of new players with little to no prior top level experience making them clear outsiders. While they did well to get this far, this was largely by defeating other unknown teams with their best result between them coming from a map win by GEARMIX over CYCLOPS during their 2-1 defeat.

While this does seem as if GEARMIX has promise, they'll need to up this for the Finals as they play FAV in the opening game while ELEMENT.36 plays eva:e who seem to be just as strong as the pro-tier teams considering their previously mentioned victories over Northeption and Nora.

After a rather confusing qualification system, the LAN Finals will be a simple single-elimination bracket with a third-place playoff kicking from the top to bottom of the bracket with:

As only the top non-APAC North team can earn a spot in the APAC North Relegations, this bracket is particularly tricky for the reigning Japanese national victors of Northeption as they will likely need to beat all three pro-tier teams in order to book their spot in the relegations while teams on the other side of the bracket such as Sengoku would need to beat just CAG out of the three to reach the Finals.

The format is as can be expected with the quarter-finals on Saturday followed by the semis, grand-final and third-place matchup on Sunday:

As well as the previously mentioned relegation spot on the line and the fact it is the first LAN event to take part in six months, there is a number of other things which makes the tournament stand out. Firstly, we have the ~$140k prize pool -- the second biggest of any national behind just the 2019 USN season -- which will be split up as follows:

Secondly, like a number of other esports have done previously but never at an R6 event, the event has an official song (seen below) which will be performed by the J-pop artist of LiSA -- who has over a million YouTube subscribers and has produced songs for a number of animes including Sword Art Online -- live at the event on Sunday:

Other guests invited include a number of professional players which didn't qualify -- Kenki from Fathers' Back, MeLton from SIRIUS and 017_Reina from Reiwa Gaming -- as well as the performers of the "Koro Koro Chiki Chiki Peppers", five different comedians including the duo of "FUJIWARA", and an ex-boxer and football player. As well as this there will also be player interviews hosted by Maki Okazo, a local TV reporter and "fitness YouTuber":

The games will be cast by the regular names of Toshiaki "Frieda" Kubota, Kazuya "Okayama" Okayama and Tomohisa "Tomozoh" Yamano in Japanese on the rainbow6jp Twitch and Rainbow Six Japan YouTube channel with no English language coverage likely.

This will all take place at Makuhari Messe in Chiba, 30 minutes outside of Tokyo's city centre. While there will be no active crowd at the event for obvious reasons, the LAN environment and entertainment will be more than enough to likely excite fans from around the world as events start to return with a bang.

As stage two of the APAC North has yet to end, we currently have yet to know how many teams from the Japan Championship will be invited to the relegations with the format working as follows:

Currently, just Nora-Rengo sits in a bottom four position with GUTS, CYCLOPS and FAV seemingly well clear of the relegation zone meaning we should have a fairly simple relegation process in Japan -- a single promotion game between Nora and whichever challenger team tops this tournament.

Nora themselves have an interesting history with this tournament as they were initially invited directly to phase two alongside their fellow APAC North teams before seemingly having this revoked following revelations of misused funds and non-payment of players by the organisation's management which you can read about here. This meant the team had to qualify from phase one where they fell early leading to their matchup and loss against FAV in phase two. This means they have no say on who might be competing against them and, whoever should meet them in relegations, the underdog team have already bested them here.

Elsewhere, the two other sub-regions of South Korea and South-East Asia will have a similar system of relegations with the format determined by the number of teams from their region in the bottom four of APAC North. South Korea's national event of the Korean Open will find who will be challenging for this spot while SEA will run two national tournaments -- the Operation Leagues in Thailand and Taiwan-- with the top teams in each playing in the regional playoffs for the relegation spot.

Catch a full roundup of the tournament here at SiegeGG as the weekend unfolds and we crown the 2020 Japanese Champions.