Next week sees the kick off of a number of tournaments within the LATAM region including teams from tiers one to four. Here's a quick rundown of everything you can expect

A number of tournaments aimed at every level of R6 in the LATAM region will take place over the coming weeks from the fight to qualify for the November Regional Major event to the University and Women's events aimed at nurturing up and coming talent in the region:

Stage 2 in each of these sub-regions will kick off this week with identical formats, talent, and schedule to that of Stage 1. The main difference in the competition is the teams as we saw a number of notable roster changes in each sub-region since the Regional Major:

The biggest roster change by far saw Rafael "mav" Loureiro Freitas leave FaZe Clan after three years on the team to be replaced by the ex-Singularity player of KDS as they hope to regain their top two positions in the region they had held from seasons 5 to 10.

Mav tweeted the following to announce his departure from the team:

Today I got told that FaZe Clan has decided to replace me. I respect the decision.

...I know nothing about my future, I only wish my team mates the best of the lucks, despite our differences you’re all great players and amazing human beings that will make it far.

Mav instead will spend Stage 2 as Team Liquid's third coach and substitute player as the team coalesces even more of the best-known players in the region onto one team.

Most of the other changes all took place in the newer teams with FURIA picking up the ex-MIBR player of Daniel "Novys" Novy as well as the Singularity player of Thiago "LENDA" Torres after a very disappointing last-place finish during stage one. Ninth place Santos also picked up some well-known players to boost their experience with the ex-NiP player of Wagner "wag" Alfaro and another ex-Singularity player of Renato "Rhyze" Costa joining the team.

Both these sub-regions see very few changes across the 15 teams. Starting with Mexico:

One of the main changes sees the second-seeded team of Timbers Esports pick up the 2019 Mexican national champion of RE4PER as the team's new in-game-leader as they hope to overtake Estral into first place during stage two.

As well as this, the big change is the introduction of the Americans of Mason "DotDash" Brasher and Brandon "wrath" Matousek onto the MeT lineup (which you can read about here). This injection of talent and experience into the team will be the focus of this Stage as we see if the investment pays off for the team. When asked about the move, MeT's co-owner of Aslan stated:

We know that to get to a Major (to really compete) we need to bring in experiences from other regions, which will help our team to further develop a more structured gameplay, individual and collective skills, as well as a strong mentality.

...In the case of Wrath, his gun skill, game sense and experience in CL were more than enough for us to want to sign him in.

...With Dot, we were looking for a smart player that knows how to handle his players and rivals; a natural IGL.

In South America, meanwhile, not many changes of note happened with the biggest seeing Anarki replace AtlaS on Nocturns Gaming with AtlaS then moving to replace Jager on 9z in return. This leaves the Stage one victor of Coscu Army in an excellent position going forward:

Considering Coscu ended Stage one with a flawless record, they will be the absolute favourites to continue their success and win the sub-region once again to confirm themselves as the standout team in the sub-region.

The Latin American Six November 2020 Major will be played out from October 30th to November 1st. Due to its separation into three divisions, three separate tournaments will be held. Brazil, Mexico, and LATAM South will have four, two, and one team each to earn prize money and SI Points:

The prize pool of the Major will be split as follows:

This likely already means NiP and FaZe have locked in a spot at the Invitational, however, a good performance at the Regional Major by Liquid and oNe will likely be the difference between attending the event or missing out to an international rival. 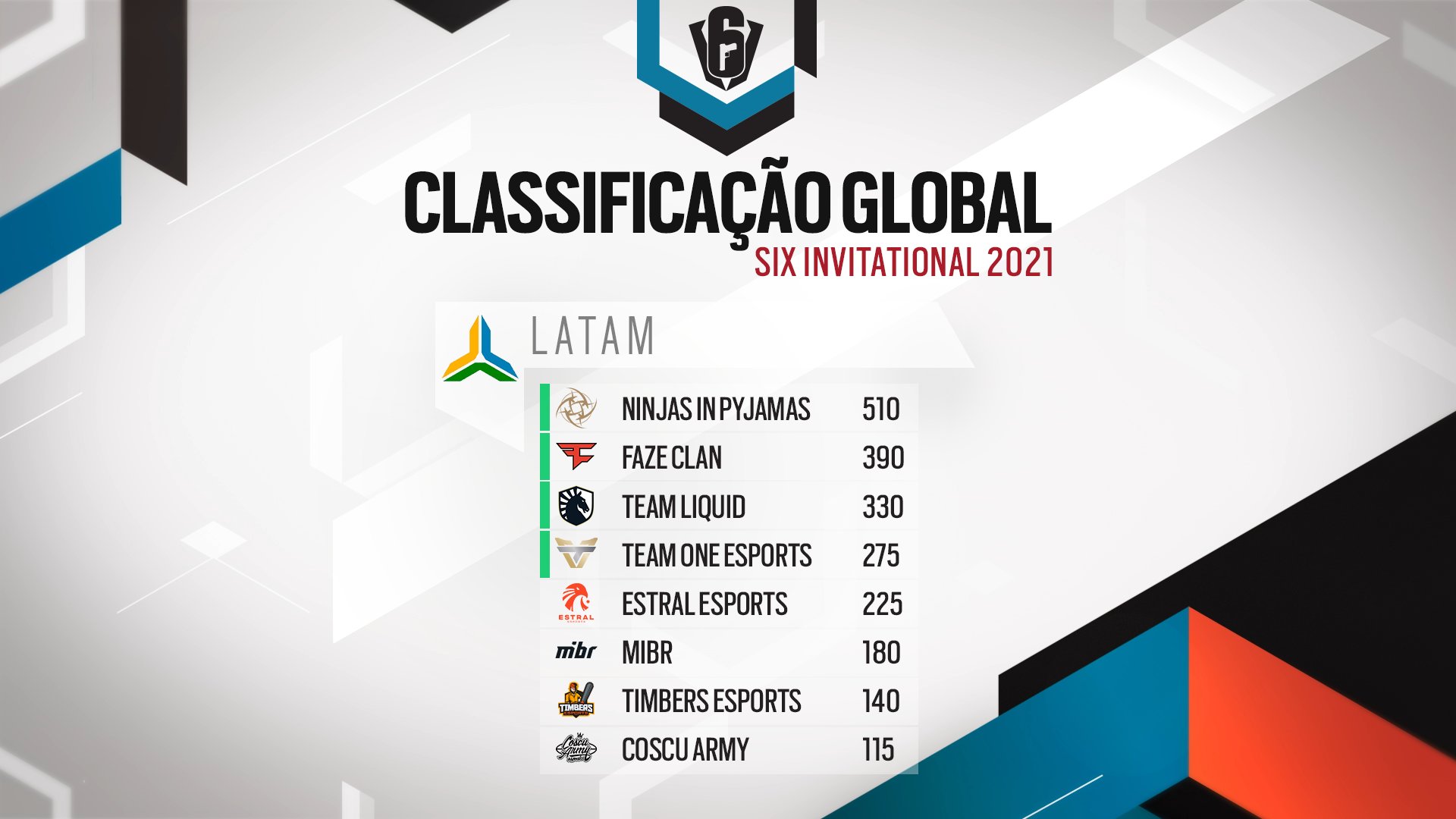 Challenger Leagues -- Series B for each sub-region

The Series B tournament saw qualifiers over the last three months to see which eight teams in each sub-region will join two open qualified teams in the ten-team league which will run in tandem with Stage 2's schedule.

Following three months of tournaments to find the first eight teams and two open qualifiers to determine the last two, here are the teams competing in the 2020 BR6b season:

This season saw an unprecedented number of transfers even compared to previous LATAM Challenger League seasons. Firstly, three teams which topped the qualifier tournaments were unable to progress to the BR6b league:

With these changes in mind this means we saw the following organisation changes take place:

On top of this, most teams also made huge numbers of roster changes making the lineups hard to measure against each other and making it a competitive tournament this stage. The team to look out for will likely be Isarus as the lineup topped the Liga Six tournaments and includes a number of well known tier-two players.

These teams will compete in a BO2 round-robin league with the top four progressing to a King of the Hill bracket. From here they will play BO3 matches with the eventual victor facing the 10th placed Brasileirão team in December.

Both the Mexican and South American sub-regions will run their own Series B Challenger League tournaments also with the victors qualifying for to a relegation spot in their own sub-region.

In Mexico the team to watch is Team Aze which after impressing during the Liga Six tournament recently picked up the Spanish player of Flama who previously competed during stages one and two of the Spain National tournament. This means he enters the team as the most experienced player on the lineup and becomes the third international transfer ever into the Latin American region, all of which have joined the Mexican sub-region.

South America meanwhile sees a single Columbian lineup of RusherX Gaming be joined by nine Argentinian lineups with it being a fairly open tournament. All three sub-regions saw their Series B tournaments kick off earlier in the week with 10 best-of-twos played every week due to the compressed schedule caused by the three-stage tournament.

Over the last three months, the 2020 Circuito Feminino has been ongoing which acts as a tier-three to four tournaments aimed at getting more women into competitive play. The format saw three closed double-elimination, best-of-three map tournaments take place with each team's placements earning them points. The top four teams by points at the end are then invited to the 2020 grand-finals taking place in November.

At the moment the current Black Dragons lineup has won all four Women's Circuit events -- two in 2018 and two in 2019 -- as well as the 2019 Women's Super League, the 2020 Queen of Hearts and both Stages of this 2020 competition in which they played in making them the clear favourites going into the grand-final. Joining them there are the women's lineups of both the INTZ and FURY organisations, both of which are well known for the Pro League rosters.

Finally, entering as the fourth seed is Tiltadinhas which narrowly pipped Granit Gaming Female (the same organisation which recently qualified for Europe's Challenger League) to a spot in the final in a head-to-head matchup during the final stage of qualifiers.

Brazil has run Collegiate tournaments for the last few years with the two São Paulo based Universities of Anhembi Morumbi University (which included the ex-Challenger League player of p0PStarr) and Universidade Positivo (which had both the ex-Challenger League player of Fressato and the Women's Circuit player of Isa) facing off in a LAN event just ahead of the 2019 BR6 Finals with the former team taking the title. Now, University tournaments will expand outside of Brazil with both Mexico and South America gaining tournaments for their 2020-2021 year.

The new format sees separate University tournaments take place in the nations of Columbia, Peru, Mexico, Argentina, Uruguay and Chile with national champions being crowned in each of the above. This is the first organised national tournament of any kind for a number of these nations which will likely lead to an influx of new South American championship players over the next year.

Keep track of these tournaments here at SiegeGG with news and stats coverage over the next month.