Following the conclusion of the regular seasons in LATAM, the top four teams in Brazil and the top two in México were invited to the mini-major events.

With the August 2020 Major being cancelled due to the ongoing coronavirus epidemic, the top teams during Stage 1 in Brazil and México competed for a portion of the Six Major's prize pool and Six Invitational points over the last week. You can learn more about each of these tournaments in our preview article below:

And here's a rundown of all the action in each of the two tournaments now they are completed: 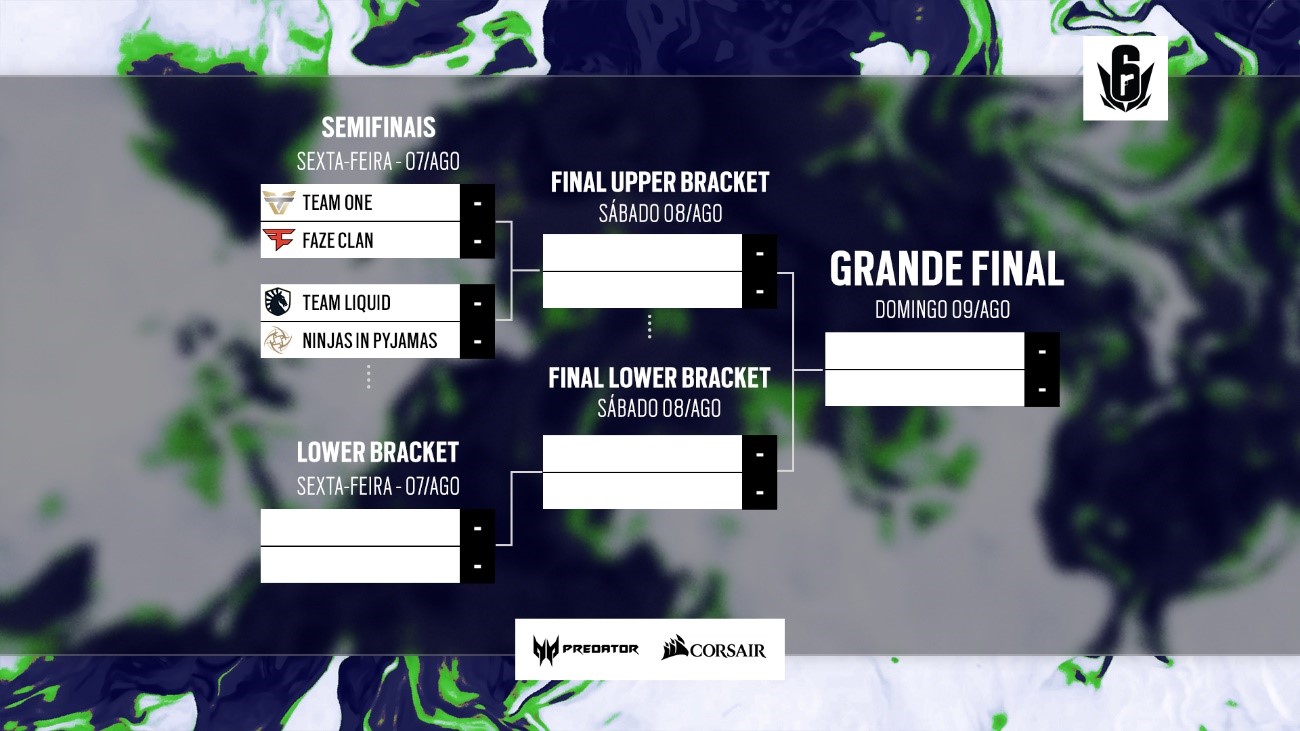 In Brazil, the event followed a double-elimination system with Best-of-Three (Bo3) games, with only the Grand Final being to the Best-of-Five (Bo5). The initial games confronted Team oNe and FaZe Clan -- seeded first and fourth -- while second and third seeds Liquid and Ninjas in Pyjamas played in the second match. The first day also saw the first match of the Losers Bracket.

The semi-final games offered the viewers some great action, especially in the first one between Team oNe and FaZe Clan. FaZe kicked things off with a 7-5 win on Villa, where they won half of their offensive rounds. Nevertheless, the BR6 leaders reacted just in time with a comfortable win on Coastline (7-3) and Kafe was the decider.

The operator ban phase there was extremely beneficial for the attackers, as none of the teams had banned a hard breacher -- Team oNe had banned Ash, while FaZe had banned Nomad. None of the rosters were able to take control of the game, with regular time unable to determine a victor.

However, the overtime rounds ended in the hands of the defenders. The last one was certainly chaotic, as Team oNe almost completed the comeback. However, LuKid, who was in the middle of clutching the round for his team, was left alone with only one bullet in his gun. At the same time, Yoona could do little but stare comically bad as he deployed a C4, before easily getting the kill a second later and gave his team the win.

Despite FaZe Clan advancing to the following round, the Brazilian roster ended with some poor numbers, especially Yoona and Astro, who both ended with a rating of 0.75. Only two of FaZe's players ended with positive rankings and only ion ended with a positive K-D (+9). Meanwhile, Team oNe players -- except Rappz -- ended with +1.0 ratings.

The second game of the day ended in the hands of the Six Invitational 2020 finalists of Ninjas in Pyjamas after a very poor game from Team Liquid. Despite that, they dominated at the very beginning, as they won the first map (Coastline, 7-5). A very poor start from NiP was key as Liquid started with a three-round advantage. The Ninjas reacted on the fourth round as pino got a 3k after all the players from Liquid decided to push from the Kitchen door. Both teams swapped sides with 3-3 on the scoreboard. NiP finally got a one round advantage at 4-5, however that wasn't enough as a Liquid retake in a post-plant situation was followed by two very comfortable rounds to give Liquid the first map.

NiP's reaction was immediate, and their dominance was only stopped by a successful attack onto Library in the fourth round. With a 5-1 lead after swapping sides, NiP easily secured match point in their first offensive round. A great clutch by Paluh on Kitchen gave his team some more time to react but NiP would later leave Paluh alone again, but now in an impossible 1v5 situation.

The third and last map was Clubhouse and the second round eventually decided the final result. Paluh, by far the best player of the weekend on Team Liquid, was left alone protecting the defuser after getting three kills. Alone against Julio, and with an SMG in hand, Paluh finally lost the fight, leaving his opponent with less than 10 HP, but Julio successfully disabled the defuser with only one second left.

The game got interesting after a 1v3 clutch from muringa with Smoke. Despite the valiant efforts from Liquid to make a comeback, NiP didn't suffer a lot in the last few rounds of the match. After the conclusion of the game, Paluh, the best player during the regular phase, ended with a rating of 1.56, being the only player of his team with a positive ranking.

Paluh's great run of form was extended to the next and last game of the day, which ended in a clear 2-0 for Liquid. After winning on Oregon (7-5), Liquid didn't have any problems on the following map (Consulate, 7-3). Once again it was Paluh who led his squad, this time with a rating of 1.49 and a KOST of 82%. 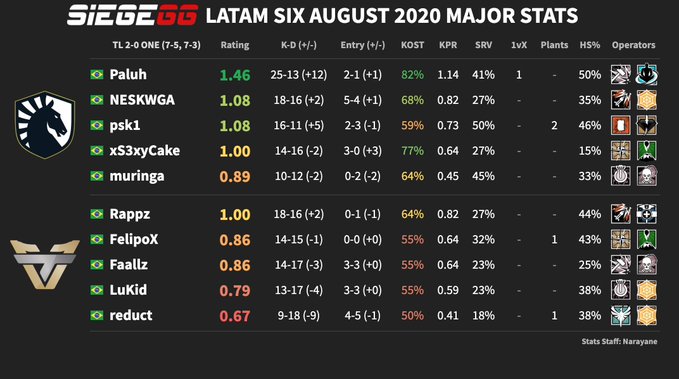 On the second day, we saw the finals of the Upper and Lower Brackets. The first one saw Ninjas in Pyjamas defeating FaZe in a very comfortable fashion, as they won on Clubhouse (7-1) and Consulate (7-4). Muzi's incredible K/D of 3.0 (24-8) and rating of 1.68 were just the beginning for him. As such, this guaranteed NiP a one map lead at the Grand Final.

Minutes later, Team Liquid and FaZe Clan played in what was a replay of the previous Brasileirão Grand Final. The match offered us two very tight maps -- specifically the first and the third. The first map was Club, where Liquid forced the overtime after being behind the entire game. The Season 7 champions even got a one round advantage there, however a successful FaZe attack was followed by a chaotic round in Church where, despite Liquid planting the defuser in a 3v1 situation, Paluh's last flashbang blinded himself and helped mav to defuse.

Liquid had a great response on Coastline as they won by 7-1 after winning five of their six defences. Oregon, on the other hand, was a very tight contest and FaZe Clan won once again after the extra time. This time, the main figure was Yoonah, as he planted the defuser in the thirteenth round, while his last play in Laundry left Liquid with no chances to win the game.

Already in the Grand Final, Ninjas in Pyjamas were the clear favourites as they had a one map advantage. Coastline was the first map, and Muzi's performance was vital for NiP, especially during the last round, as he completed one of the best plays of the Major. Coming from VIP, his great aim with Ash left him in a 1v1 without the defuser. After picking it up, he started planting in Hookah with only four seconds left. However, after hearing mav, who was on Blue Stairs, he managed to stop the plant and kill the final FaZe member with a mere two seconds left.

The second map -- and the last one -- was Oregon, which was a comfortable win for NiP as they won five of their six defensive rounds. Despite FaZe Clan's reaction, it was too late. NiP finally won 7-4, a result that crowned them as the new Brazilian champions. 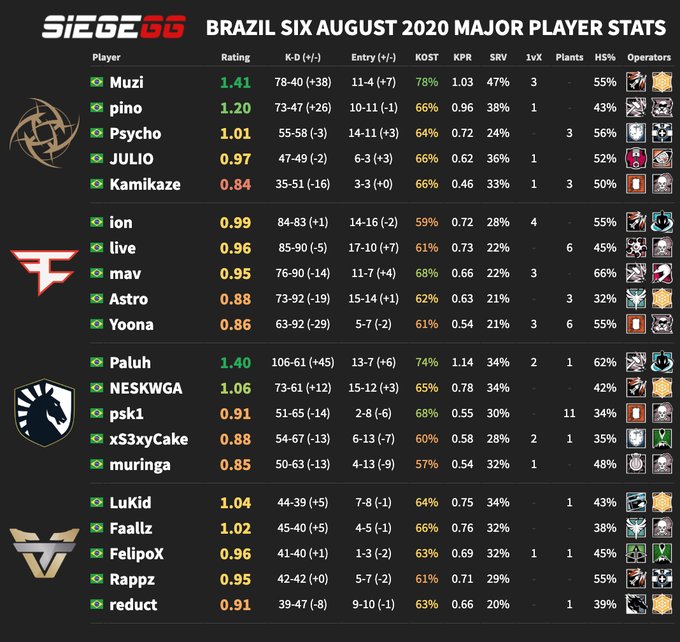 Despite Liquid's performance, Paluh's individual numbers were one of the best, as he got 106 kills after playing 8 maps, with Sledge and Wamai as his main operators. Muzi was the best player of the tournament, with a 1.41 rating and a 78% KOST.

The Mexican format was different, as there was only a Grand Final, with Estral Esports and Timbers Esports as the only teams. Estral were the favourites to win the Major after their dominance during the regular phase. Timbers, on the other hand, wanted to surprise everyone by knocking out the Mexican champions.

Unfortunately for them, it wasn't meant to be. Estral won the first two maps without many complications (7-4 on Theme Park and 7-5 on Clubhouse). However, there was some trouble in the seventh round of the second map, as a trade between Pixie and Vector in a 1v1 ended in a win for the attacking side despite no defuser plant.

Despite losing on the first two maps, Timbers won the third one of Villa (8-7) after being 2-6 down. The last round was complete chaos, as Estral went from a 3v5 to a 3v1 in a matter of seconds. This was their first loss on a map since the second game-week of the Campeonato Mexicano, which was played one month ago.

However, the fourth map was everything but good for Timbers. After only winning one of their defences, Timbers won zero on the offensive side. This meant that Estral were the winners of the Mexican Major, taking the Grand Final 3-1.

After the ending of both Majors, the Six Invitational points were distributed as follows:

Meanwhile, the Prize Pool was divided as follows: