Here's a rundown of all the announced changes to the APAC region coming when the next season kicks off in just under a month.

While ESL has left competitive Rainbow Six in every other major region, Asia-Pacific (APAC) will be the one place where the tournament organisation will stay, continuing through its ESL Asia-Pacific arm -- separate from the ESL Poland arm that used to run the Pro League in the other regions. 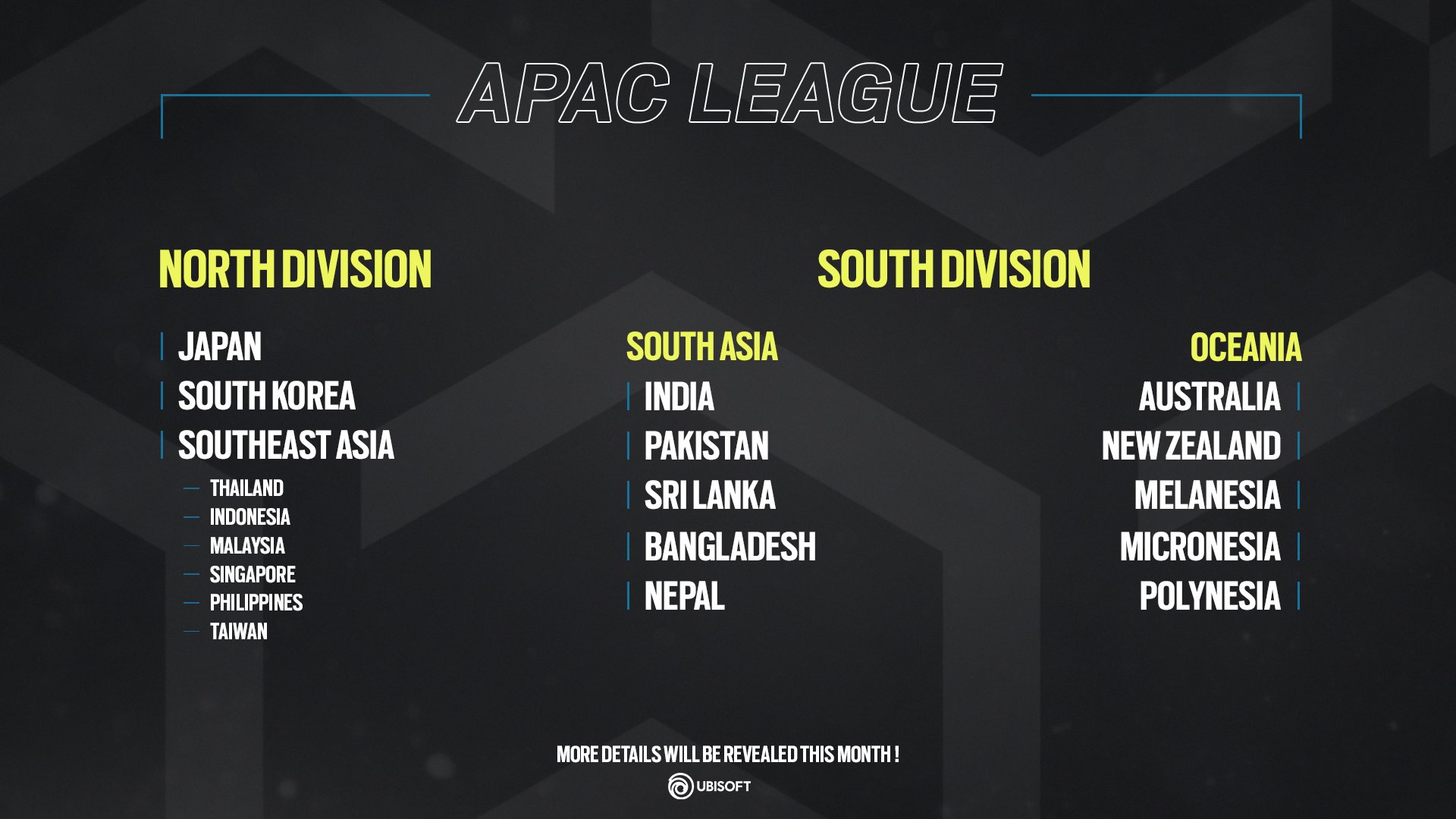 The APAC North division will be the primary APAC divsion, featuring 12 teams in total from a total of eight possible countries of residence. Of note is the fact that Fnatic is set to move to Japan to compete in the division, as opposed to staying in Australia for the APAC South division like the other Oceanic teams.

These 12 teams are as follows:

As with the other regions, the 2020 Season will be split into two stages for APAC  -- the first from June to August and the second from September to November. In the APAC North Division, the 12 teams above will compete in an online, double Best-of-One, Swiss-system league. Each stage will comprise two Swiss tournaments, played back-to-back and limited to five rounds each to yield 10 play days per stage.

For the first-round matchups, teams will be drawn randomly, following which the teams with the same or the closest win/loss ratio will play each other in the subsequent rounds. This system is akin to Chess tournaments, where Round 2 will see the winners play each other and Round 3 the teams with one win and one loss playing each other (and so on). 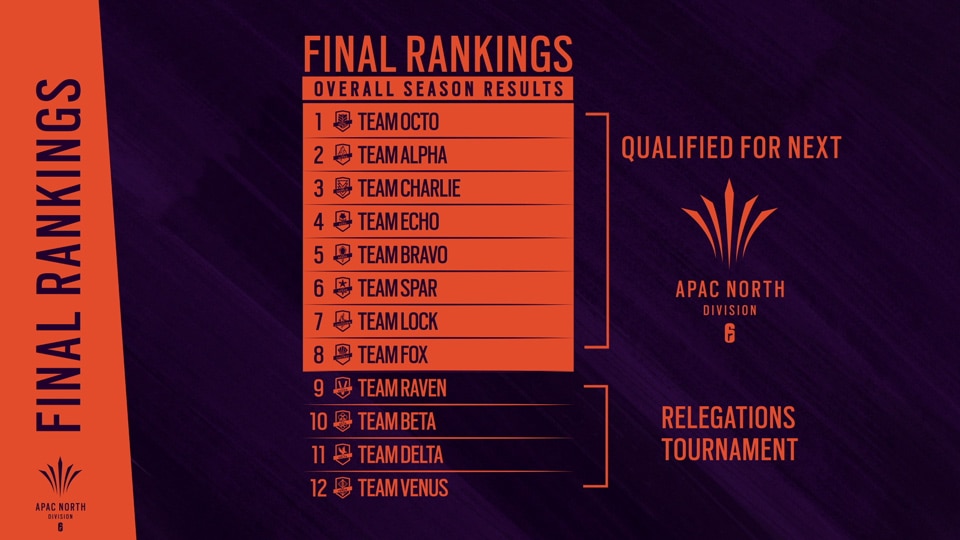 The new system will not have draws, similar to how the currently underway Six Masters 2020 switched to a three-round overtime, no-draw, double Best-of-One system. However, more interesting is the fact that it will also not be awarding any points.

Instead, standings will be determined by the final win/loss ratios of all the teams after both Swiss tournaments, although the fact that there are no draws does mean that -- in effect -- points are still awarded. With the lack of draws, a ranking produced by the win/loss ratio will be identical and equivalent to a ranking produced by awarding any number of points to a win and zero points to a loss.

Of note is the fact that the second Swiss tournament will be weighed more heavily than the first, so if two teams finish with the same win/loss ratio (for example, 18/4), then the team with the higher second tournament ratio will be ranked higher. If teams have identical tournaments (for example, 8/3 in the first and 10/1 in the second), though, it is presumed that further tiebreakers in the form of the mini-league and round-differential will come into play. 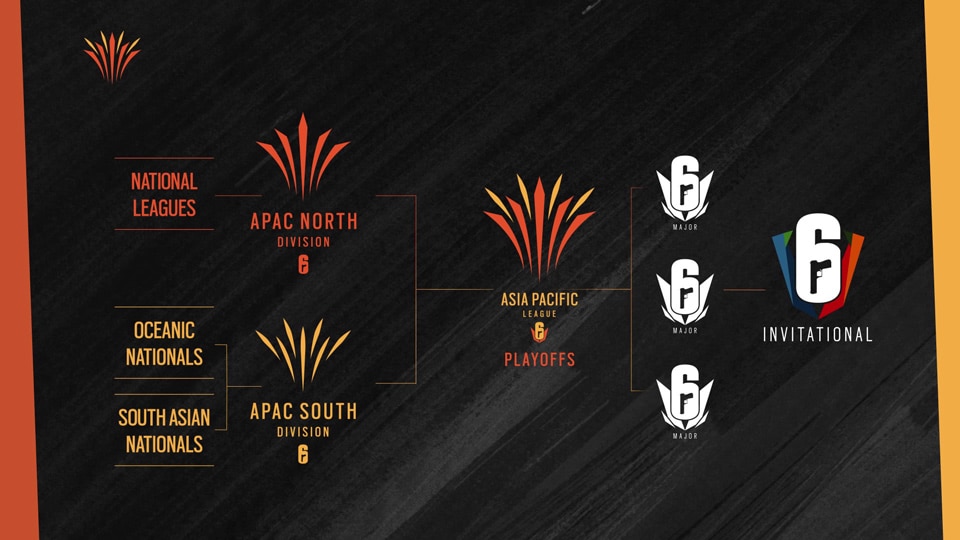 Once each stage concludes, the top-six teams will then progress to the online-held APAC Playoffs, where they will be joined by the top-two teams from the APAC South Playoffs. Playing in a double-elimination bracket, the top-four teams will qualify to the upcoming Six Major and also earn points towards the Six Invitational.

While the four remaining teams will not qualify for the Six Major, they will still earn points towards the Six Invitational.

Following the end of all the stages, each season will conclude with an APAC Finals LAN event -- different from the APAC Playoffs. Based on the combined rankings of the stages, through the accumulated Six Invitational points, the top-three APAC North teams will be joined by the top APAC South team to play a single-elimination tournament with a Best-of-Five grand final and crown the best team in APAC.

At the same time, the top-eight teams will be invited to the next season, while the bottom-four will proceed to the Relegation Playoffs and play against the corresponding teams from their own subregional Nationals -- with one exception, as will be explained below.

These Nationals teams will be obtained from the winner of each subregion's nationals -- the Japan Nationals, the Korea Nationals, and the Southeast Asia Nationals. The fourth team that will get a chance to be promoted will be the runners-up team from the subregion that has the least number of teams in the top-eight.

This stipulation is confusing, and could possible mean the following: if the bottom-four from the APAC North division comprises one Japanese and South Korean team each, and two Southeast Asian teams (thus meaning that South Korea only had one team in the top-eight), the runners-up of the Korea Nationals would play one of the "additional" Southeast Asian teams in the bottom four for a spot in the APAC North Division the next season.

What is confirmed though is that if the bottom-four has no teams from a certain subregion, the winner of that subregion's Nationals will be directly promoted to the APAC North Division.

For example, if the bottom-four has no Japanese teams and instead has two South Korean teams and two Southeast Asian teams, (one again meaning that South Korea would only have one team in the top-eight), the winner of the Japan Nationals will proceed directly into the APAC North Division.

As for the Nationals themselves, it seems that Japan and Korea will have straightforward Nationals tournaments, with each champion getting a shot at the APAC North Relegation Playoffs. Over in Southeast Asia, though, it seems that the current system with the Operation Leagues will stay in place.

Here, Taiwan, Thailand, and "Southeast Asia" (comprised of Indonesia, Philippines, Malaysia, and Singapore) will get their own Operation League tournaments, with its top teams then headed to another set of Southeast Asian playoffs to determine the overall Southeast Asia Nationals champion alongside the Japanese and Korean champions.

The broadcast for the APAC North Division will also see a huge jump, with casting talent for the region centralised at the Ubisoft studio in Paris, just like for the European League. Included will be new features to boost the production value of the league:

However, thanks to the COVID-19 situation, the full studio will not be opened at the start of the APAC North and South Division Leagues on June 23rd. 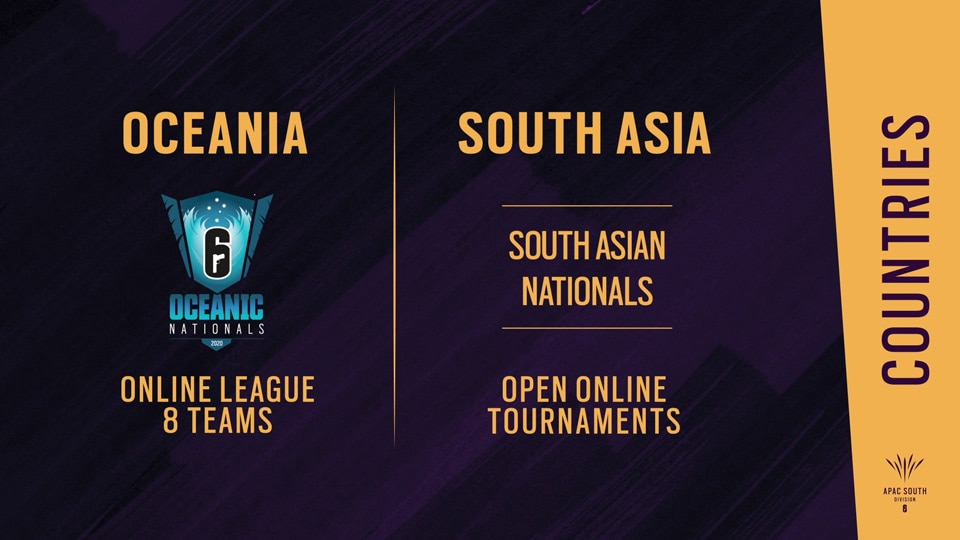 In Oceania, eight teams from Australia, New Zealand, Polynesia, Micronesia, and Melanesia will play in the online-held Oceanic Nationals. Playing each other once in a round-robin system, the top-three at the end of each stage will advance to the APAC South Playoffs and be joined by the top South Asia Nationals team.

It is currently unconfirmed which eight teams will be playing in the Oceania Nationals, though it is likely that the eight teams currently in the Six Masters 2020 will carry over into the new league.

Details about the relegation and promotion systems will be communicated in the future.

Conversely, the South Asia Nationals will see teams from Bangladesh, India, Nepal, Pakistan, and Sri Lanka face off in a set of four open online tournaments that will feed into a closed bracket playoff. Each open qualifier will have a single-elimination tournament and the top-two teams will then advance to a closed qualifier.

Here, the eight teams will play in a double-elimination format with a Best-of-Five grand final (with a one-map advantage to the upper bracket winner) and the winner will proceed to the APAC South Playoffs. 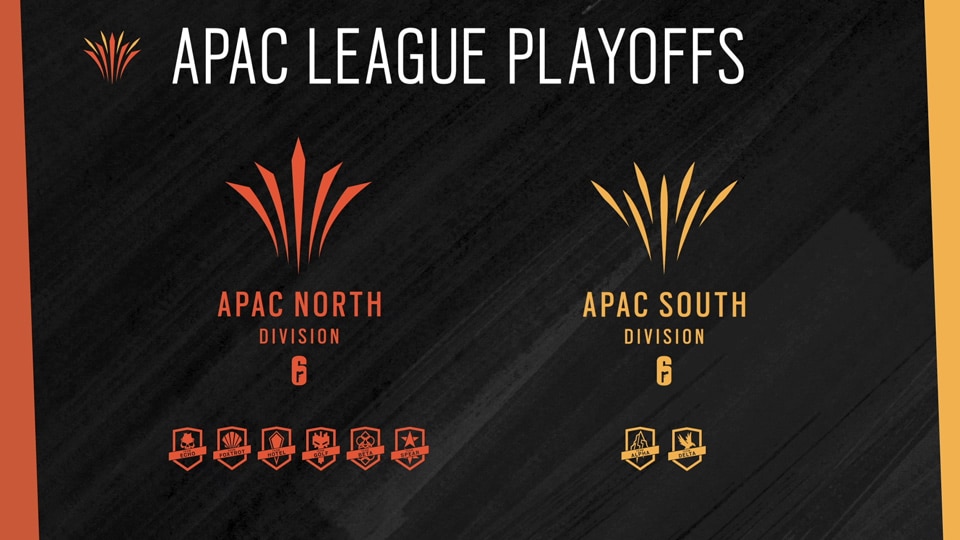 At the end of every stage will be the APAC South playoffs. This LAN event will bring the top-three teams from Oceania together with the top team from South Asia to play in a double-elimination tournament. The top-two teams here will then progress to the online APAC Playoffs, joining the top-six from APAC North.

However, it is yet to be revealed what will be done to mitigate the issue of high-ping for any Oceanic team(s) that will qualify to these APAC Playoffs. It is possible that Ubisoft or ESL will fly these Oceanic teams to somewhere in Asia, thereby effectively making them an Asian team for the purposes of these online Playoffs without having to fly eight teams for a full-fledged LAN event. This would make the Oceanic teams' ping identical to the Asian teams', but still keep the Playoffs an online event.

Following the end of all the stages, each season will conclude with an APAC Finals LAN event -- different from the APAC Playoffs. Based on the combined rankings of the stages, through the accumulated Six Invitational points, the top-three APAC North teams will be joined by the top APAC South team to play a single-elimination tournament with a Best-of-Five grand final and crown the best team in APAC.