In Case You Missed It: This Week in Siege - September 22nd

All the best action this week in one place

With the Pro League kicking off next week for the NA, EU and LATAM regions, let's take a look at some of the other action we saw over the last week:

The USN restarted for Stage 3 last week as the first of four initial qualifiers took place to qualify for the “stage playoffs” next month. A full explanation of the format and the two previous stages can be found below:

Firstly, on Tuesday we had the Western Conference games, as the Challenger League team of 2Faced faced Draak Esports, while Disrupt Gaming was scheduled to face Luminosity Gaming. This second match was unfortunately forfeited by LG, however, creating a pretty open field for the remaining teams. The other semi-final saw a fairly easy game for 2Faced as they showed why they are so well known within North America, with a 7-1 victory to set up a grand-final match-up against Disrupt.

In just this month alone, these two teams have seen a number of roster changes, with both Brainbow and Thumbus joining Disrupt to replace EvLWaffle and the Evil Geniuses-bound player of Modigga, while 2Faced saw the ex-Pro League player of Krazy join to replace Xecration, the new coach of #APE (previously known as the Pittsburgh Embers). This meant that this game was a perfect insight to see how their new roster looks stacked up against a fellow Challenger League team before the league kicks off next week.

The game itself was a remarkably close one, as shown by Yeti’s 2v1 clutch in the very first round. The two teams kept within a single round of each other for the first nine rounds of this match, thanks to another clutch by Disrupt, before a quick double kill by Butterzz was immediately shut down by Read to put Disrupt up 6-4 on the road to a 7-5 win.

On the East, meanwhile, the two semi-finals saw DarkZero, fresh off defeating the Challenger League team of Akatsuki, face a rematch against Parallax Gaming, while two more Challenger League sides of Shrug and Rise Nation met on the other side of the bracket. Parallax had previously already defeated DarkZero in the US Nationals back during the first qualifier of Stage 2, but Hotancold ensured that wasn’t to be repeated here as his 11-3 Kill-Death split helped the team to a somewhat dominant 7-3 victory.

Meanwhile, on the other side of the bracket, Shrug, playing with Nuggs subbed in for the Canadian of Flynn, had a much harder game against Rise Nation and their two new players of Beastly and adam. Across their 7-5 eventual victory, we saw 4Ks by NotLoading and Mex, as well as two 3Ks from Cloudstruck, showing that individual performances were really carrying Shrug forward, while not a single player on Rise achieved a 1.0 or higher rating. This, however, doesn’t show the full picture -- while Shrug was clearly out fragging their opponents, it still was a close game as Adam, Vandal, and England all won 1vX situations to keep their team in the game. Eventually, though, they were overpowered to set up a DarkZero vs Shrug final.

Despite being the underdogs, Shrug really did put up a fight on Kafe, the final map of the day, as they initially went ahead 3-1 before DarkZero pulled it back to draw the first half before they moved onto defence. Kafe is known to be a defender-sided map which DZ showed clearly to be the case as they won four out of the next five rounds to take the map, 7-4. In a reverse of the previous map, Shrug was simply out-fragged by the professional-calibre gunplay from DZ. Mex fell from a 14-9 kill-death spread down to 7-9, while Nyx achieved the only 4k of the game. This now means that DarkZero’s fifth attempt to qualify for the US National Finals continues onwards despite what was an impressive performance for a Challenger League team playing with a substitute.

Spain Nationals - Heretics and x6tence End the Season On Top

This week saw the final play day in the Spanish National league as the seedings for the LAN Finals were determined, with six out of eight teams in the league advancing forwards.

The four top teams in the league all faced off against each other as Queso played x6tence and Heretics faced Vodafone Giants’ Spanish roster, deciding the results at the top level of the standings. The first game of Queso vs x6tence was surprisingly the most one-sided game of the week, as a massive 5.0 K/D ratio from Kruiboh -- a player usually in the mid-table for his team -- ended the map very early with a 7-2 scoreline. This result was extremely important for the team as it kept the Giants from climbing any higher in the league table, with the full scores from the final week of action seen below:

All eight teams from the regular season will now travel to the LAN Finals at the Madrid Games Week from the 4th to the 6th of October, where an initial group stage will take place, with their regular season's seedings determining the groups. After a day of games, the top two from each of the GSL-style double-elimination brackets will progress to the playoffs to fight for the top share of the €20,000 prize pool:

While the Movistar Riders are the reigning Spanish champions, the team has undergone substantial changes in their roster, and with a fifth-place finish in the regular season, it is surely an uphill battle for them to retain their title. Instead, eyes will mainly be on the three favourites of Team Heretics, x6tence, and the Vodafone Giants ES as one of the top national events in Europe comes to its close

We've got the teams! See you in the League finals at @MadGamesWeek.

The North American and European regions of the Cyberathlete Championship Series’ Women’s League started last Wednesday as 10 teams per region played their first game of the season in what for many of the players was their very first competitive game. Across the two regions, there’s a number of recognisable organisations involved, such as Disrupt Gaming, Team SiNister, T3H Esports, and PENTA. Also participating was a number of well-known streamers such as Lil_Lexi, Thatonebritt, FooYa, AutumnMae, and kitty.

With each team having played just a single map so far, it is hard to determine any standout teams or players of yet. However, in North America, the star players of Post.Melon (with an 18-4 scoreline) on Slaughter House and FooYa (with a 16-4 performance) on Queen Yolo Mid led each of their teams to 7-2 victories to place them at the top of the region’s standings. In Europe, the T3H Esports’ players of C4NARY, who achieved a 16-1 scoreline, Aztec (10-0) and Midnight (7-0) were clearly the top performers of their region as they helped their team defeat Sphynx 7-0, with just four combined deaths across the team.

Next week, we’ll see four of the five teams European which found victories this week play off against each other, with T3H playing North Sea Gaming and the SPYS playing Samsung Morning Stars. Over in North America, eyes will most likely be set on Disrupt Gaming vs Victorious Secret.

Elsewhere in R6 - Disqualifications, the Finnish Esports League and the Canadian Nationals

This week saw two ESL disqualifications as Scrypt was removed from Southeast Asia's Pro League and Salamander was replaced by SYZYGY in the EU Challenger League. For more details on both of these decisions, check out our summary below:

The Finnish national championship also ended this week as the Challenger League team of KKona KKopteri, led by the ex-Pro League champion of Otto "pannari" Heikkinen, was crowned the best team in the league and took home €1,500 of the €2,500 prize pool. To do this, they took down one of their regional rivals of Enviik, best known for defeating EnD Gaming, and Team Oplon during the Allied Esports Minor qualifiers, 2-1 (4-7, 8-6, 7-4) in the Grand Final, with one of the best upcoming Finnish players of Oskari "OSKAMOSKA" Huikko pulling off the following 1v4 clutch to make the difference on map two:

Finally, we have the Candian Nationals in its third to final play day before the LAN Finals in a month’s time. This week, we saw the two semi-finals of LiViD Gaming -- a team we saw compete at DreamHack Montreal 2019 -- face Momentum, while Old Man Club faced Yes, which, unfortunately for spectators, ended in two of the most one-sided games of the 2019 season. LiViD took their game in their stride as they won 7-2, 7-2, while Yes defeated Old Man Club in another 2-0 scoreline of 7-2, 8-6.

Over the next two Saturdays, we will, therefore, see PsykoPaths Gaming vs Super Nova, followed by LiViD Gaming vs Yes, with the winner of each game qualifying for the LAN Finals at EGLX 2019 in Toronto on October 19th where they will face the Stage 1 winners of Team Canada -- the three times national champions -- and Thread the Needle.

The next season of the British national tournament was announced this week as Natus Vincere aims to become the second three-times national champion in Europe, behind just Mkers in Italy. The season will see the top teams return to the Bowlers Exhibition Center in Manchester, the same location we saw two seasons ago, but we will see the exclusion of Team Secret who have opted to leave the league to focus on their upcoming Challenger League games.

As well as Team Secret’s departure, the league has been rocked by a number of teams disbanding, leading to a second set of qualifiers taking place on September 24th and 28th:

Finally, we learnt some exciting news about the upcoming BR6 season despite no official announcements being made. The @rainbow6br Twitter account tweeted out a poll asking which days viewers would prefer games to be played, as the 2020 season will have three play days per week, up from just a single Sunday play day each week. It is unknown whether this means a shorter season or a completely redesigned format, however, an official season announcement should come within the next month.

And so, there’s the roundup of everything that happened in R6 over the last week. Check back here next week for more coverage of R6 action at all levels of play, including the restart of the Pro and Challenger League, and the return of the 6 French League. 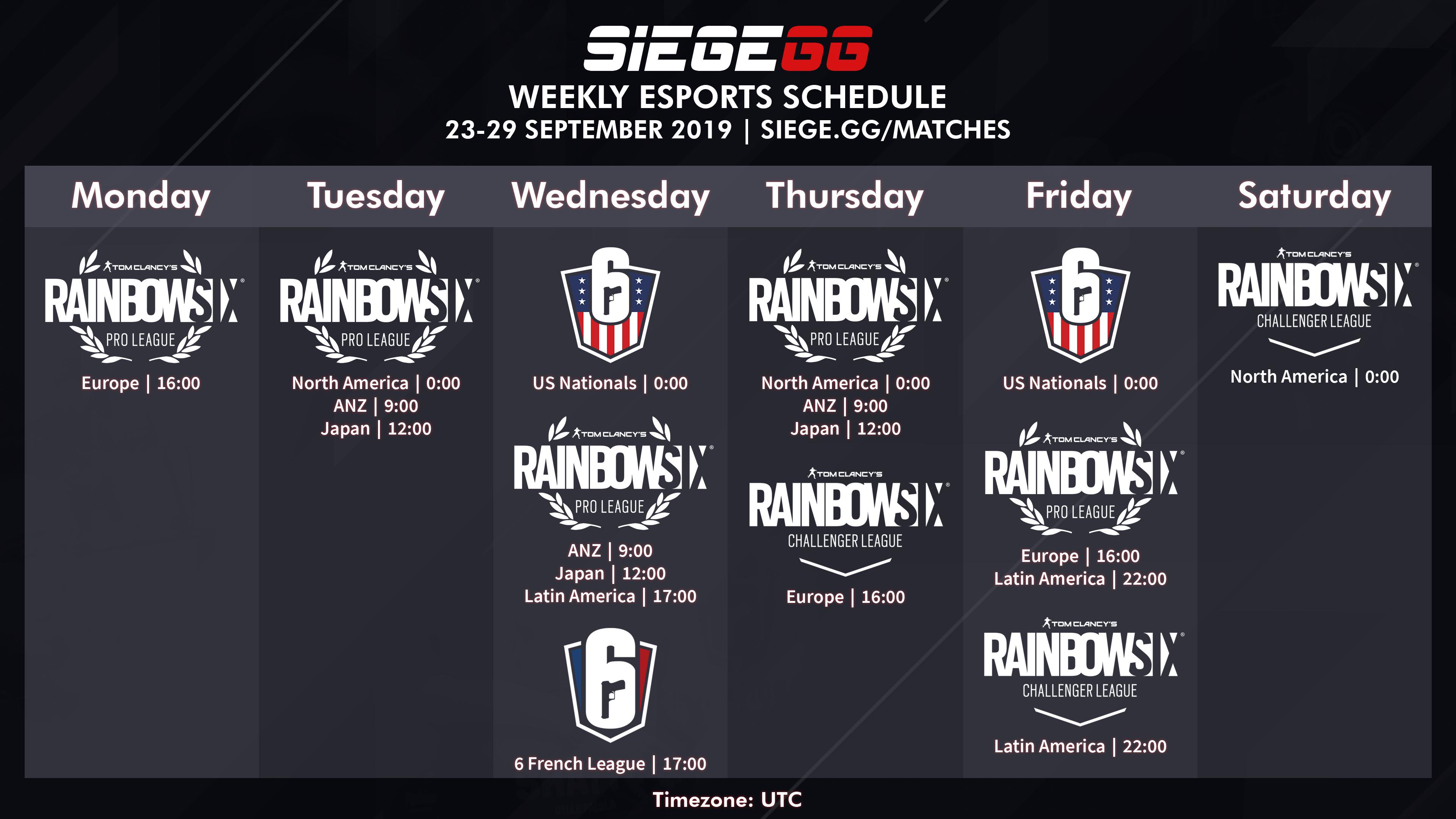