An Introduction to Rainbow Six Siege

A short guide to understand what Rainbow Six Siege is and what makes it unique.

What is Rainbow Six? 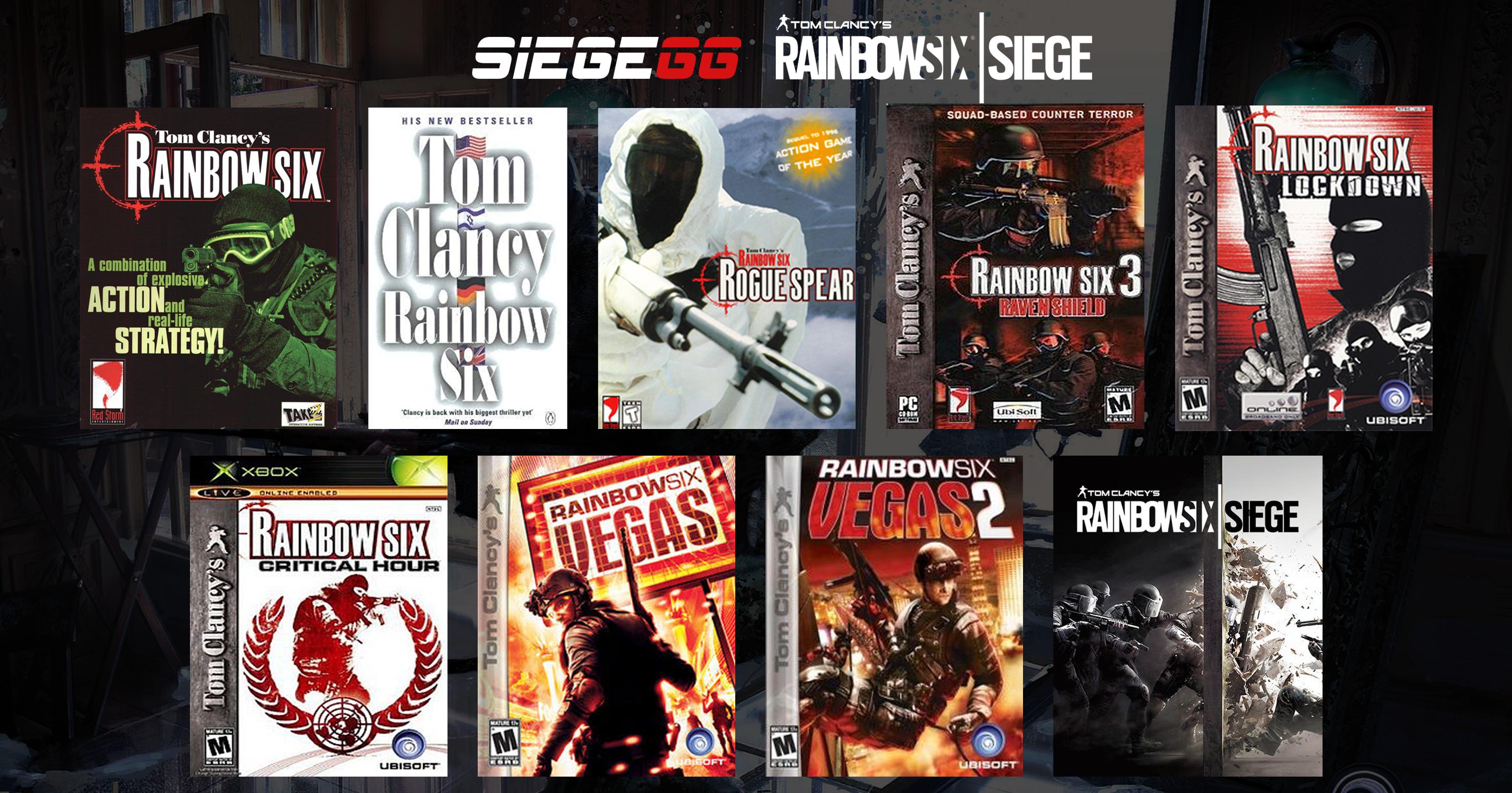 Rainbow Six is a franchise, originally released as a novel by Tom Clancy in 1998, about a joint operation anti terrorist team consisting of members from the NATO countries and Israel. Alongside the book, the first game in the series was released in the same month, named just Rainbow Six, the plot of the game mainly follows the same plot as the book with the Rainbow team being tasked with taking down an eco-terrorist named Dr. John Brightling. The game was developed by Red Storm Entertainment, Tom Clancy's own video game company.

Following the success of the first game, Red Entertainment continued to develop more games for the series, until 2000 when the studio and video game rights were bought by the French based game developer and publisher Ubisoft. Each game has had a slight variation of characters, scenarios and countries involved in the joint operation. 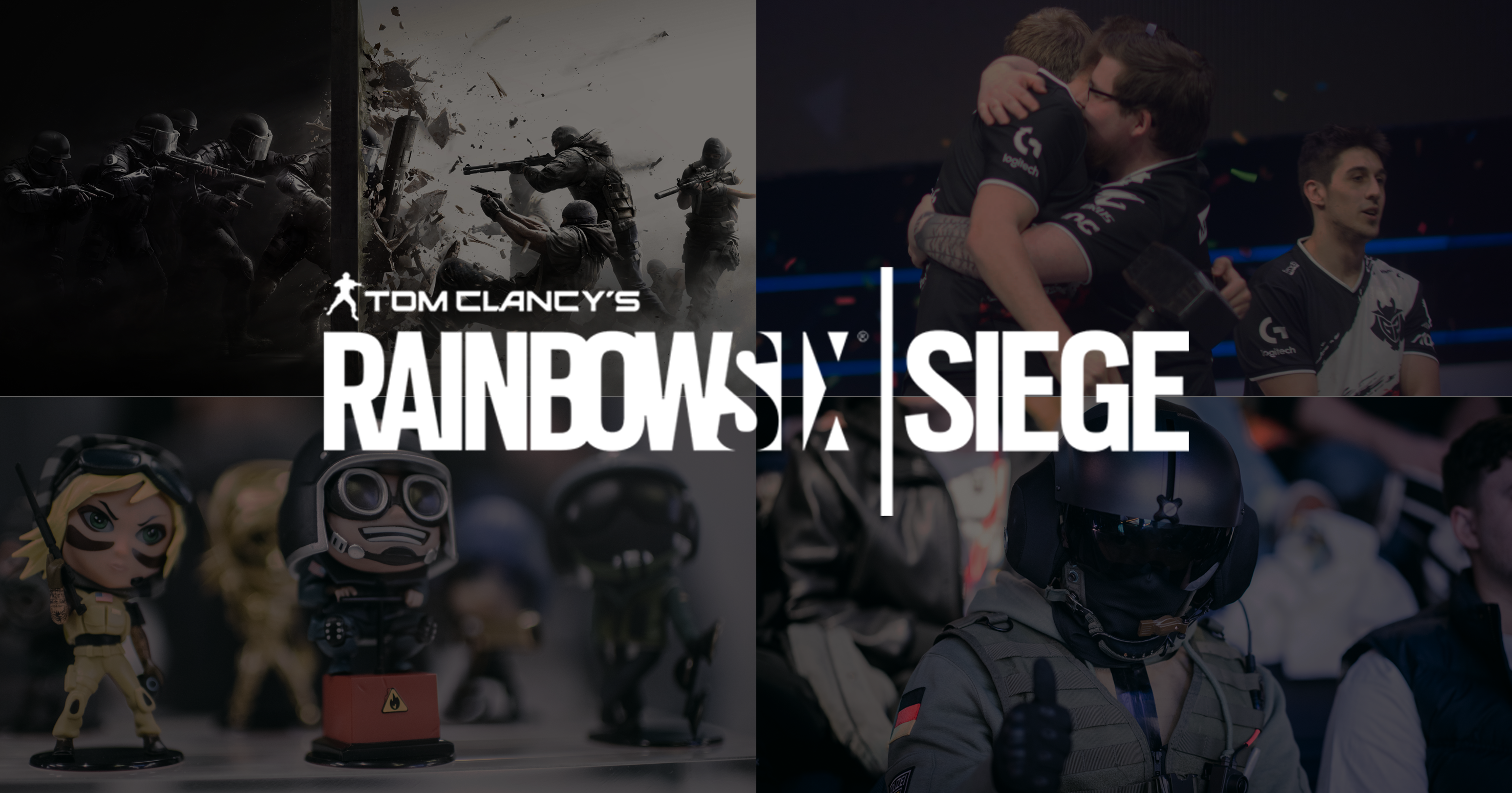 Rainbow Six Siege is the eighth installment for the franchise, released in December of 2015. The game is a multiplayer first person shooter, and whilst it does have a co-op and single player mode these are not the main focus of the title. The multiplayer consists of a 5 v 5 game mode with multiple rounds. Five of the players play on the defence, having to protect an objective from the other five players on attack, the teams then switch sides until the game is won. The game sells itself on its more hardcore features such as:

There are three different modes in the game:

Within multiplayer there are two different playlists, Casual and Ranked. The ranked playlist is not available until you reach level 30 as this mode is for players looking for a more competitive challenge, therefore ranked is restricted to a certain set of maps, has more rounds in each game and gives you a ranking based off of the Elo rating. After playing 10 matches of Ranked you will be assigned a rank between Copper IV up to Diamond, after getting this rank each game you play in Ranked will either increase your score if you win, getting you closer towards the next rank, or will decrease your score when you lose. The more games you play the smaller the reward/loss will be for winning/losing.

In both Casual and Ranked you will earn renown for playing, this currency can be used to unlock DLC operators, alpha packs or cosmetics for your weapons/operators. As well as the renown currency there are also credits, these can’t be earned but must be bought with real money. Just like with renown, you can also buy operators, alpha packs and cosmetics, however some cosmetics are locked to only being able to be purchased with credits. 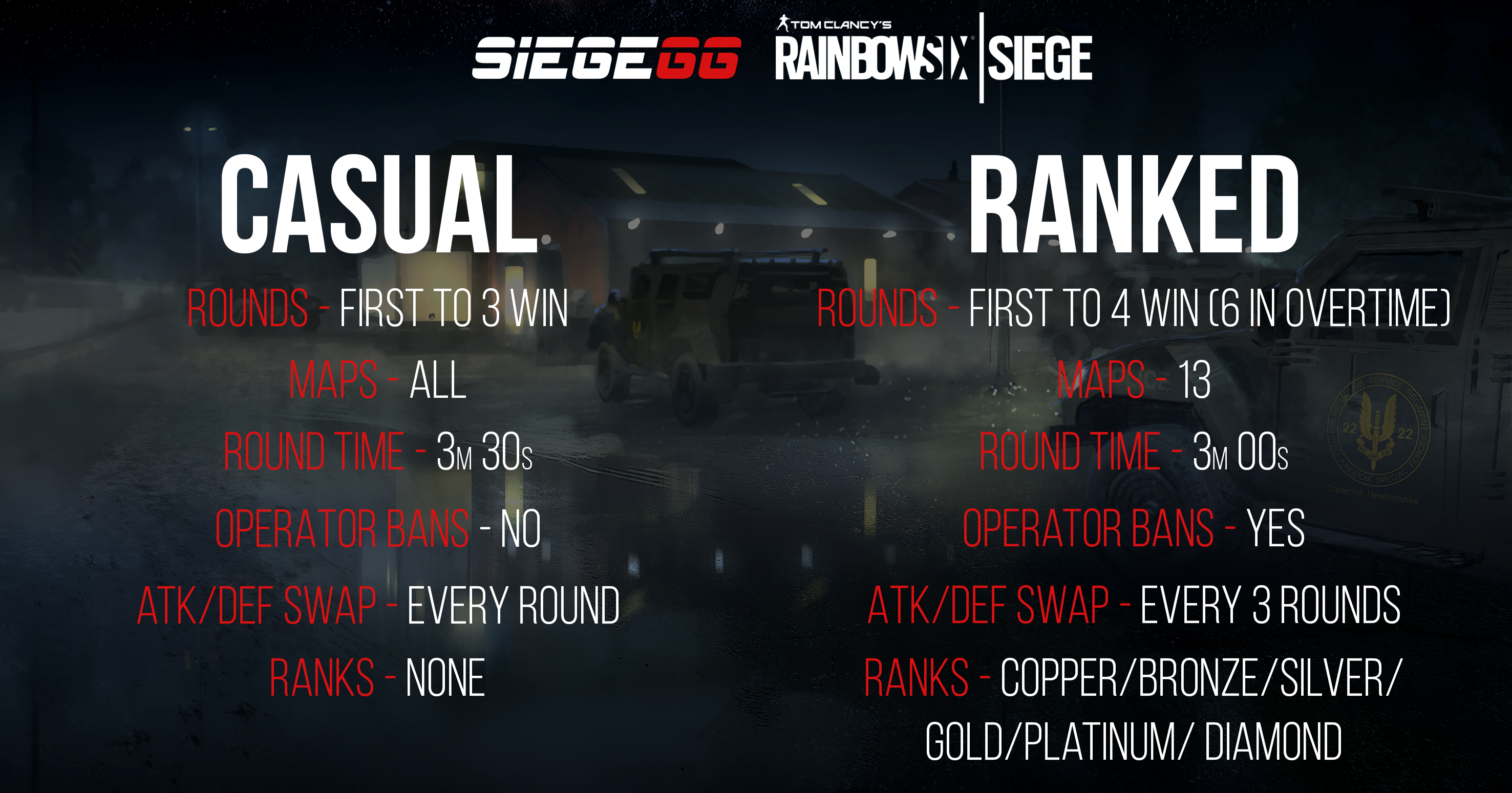 Once you load into a game you will then be brought into the site select screen, in casual this will automatically be allocated to you, however in ranked you and your team will vote on where to defend if you are on the defense side, or as an attacker you will choose where you would like to spawn. You will then be taken to the operator screen, here you will pick which operator you want to play, have a chance to edit the loadout including the weapon, its attachments, the secondary weapon and your equipment. Each operator has a choice between 2 pieces of equipment.

The attackers can choose between:
Breaching Charge - To destroy soft walls/floors, allowing you to enter the room.
Frag Grenades - To kill or flush out an enemy.
Smoke Grenades - To conceal a position and deny line of sight to the enemy.
Flashbangs - Blinds and deafens the players for a short period.
Claymores - Can be planted on the floor, will kill any defender that walks into the laser tripmine.

The defenders can choose between:
Deployable shield - The players can use this to create cover for themselves
Barbed wire - Used to slow down the attackers when they walk through it, the sound will also alert the defenders to your position
C4 - Can be thrown onto surfaces where it will stick, will kill enemies when detonated.
Impact grenades - Grenades used to create holes in soft walls.
Bullet proof cameras - Cameras that are mounted to a wall or floor, can’t be shot but can be blown up/meleed to destroy.

Once the round has begun you will start off in prep phase. This is a 45 second window for the defenders to get set up, and whilst they are preparing the attackers can use their drones to scout out the map to find the objective, gather information on the defense set up and then  position their drones for the remainder of the round. Once the 45 seconds are up, attackers will come off their drones and spawn in to begin their advance onto the site.

Following the prep phase, the attackers have either 3 minutes or 3 minutes 30 seconds (depending on whether you are in casual or ranked) to win the objective, whether that be planting a defuser, rescuing the hostage or capturing a site from the enemy. During this phase the defenders may go outside of the building, however after two seconds their location will be pinged to the attacking team. If all 5 players on one of the teams die then that team will lose the round. The only exception to this can occur in the bomb game mode if the attackers have planted the defusers then the defenders must still find and disable the defuser. In ranked, if the defenders win the site they can't play that site for the next round. In casual, the first team to reach 3 round wins will win the match. In Ranked, the first team to win 4 rounds will win, however if both teams gets to 3 round wins then they will enter overtime. Here it will then be the first team to get to 5 round wins will win the match.

During each round the player will get to pick what operator they want to play as. Each operator can only be picked once every round meaning you will never see 2 of the same operators in game at the same time. Each operator belongs to a Counter Terrorist Unit (CTU) which can be identified by the colour of the operators icon.

Each operator has their own unique ability, for example Thermite can breach reinforced walls, and Jager has 3 ADS’ he can place around the map to intercept and destroy any projectiles thrown by the attackers. You can find a list of every operator and their ability on the Ubisoft website. 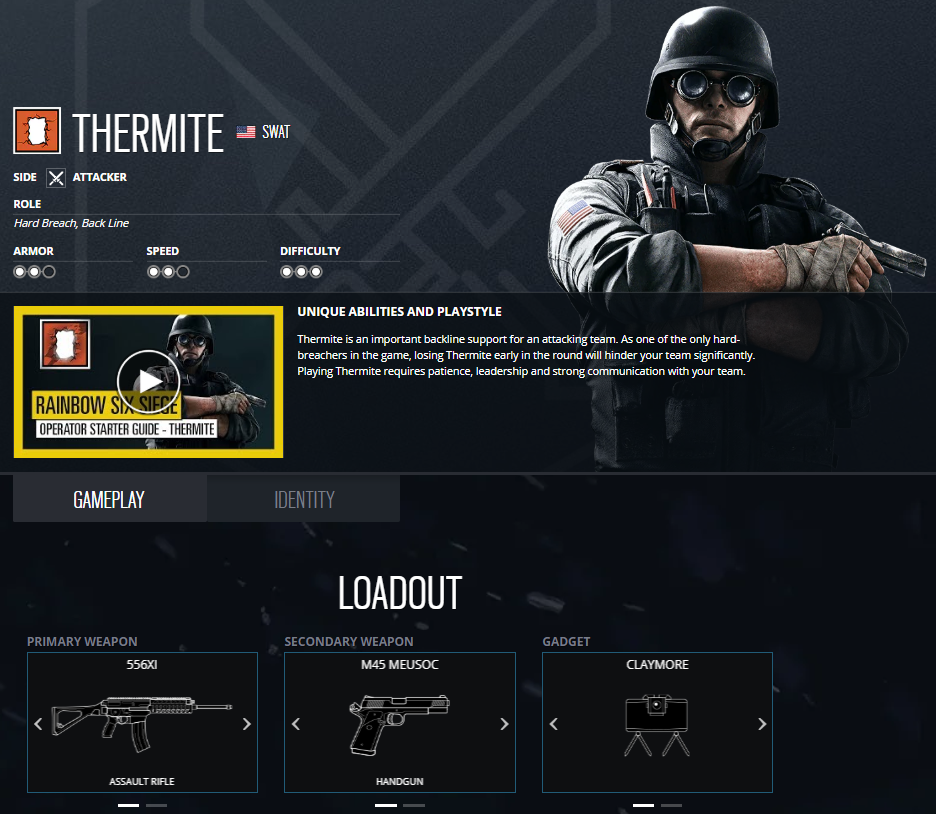 These operators all have a counter or limit to their ability, for example Hibana’s pellets can be jammed by Mute’s jammers, destroyed by Bandit’s shock wire, or just shot if a defender can get a safe angle. However both Mute’s jammers and Bandit’s shock wire can be destroyed by Thatchers EMP grenade. These counters allow different combinations of operators on both Attack and Defense to play each round in a completely different way allowing for new strategies and methods to constantly be discovered.

All weapons have a range of attachments that can be added to the weapon to allow it to match your playstyle better. The attachments come down to personal preference, depending on how you want to tweak the weapon. The vertical grip will reduce recoil on the weapon, whilst the silencer reduces the sound of your weapon and remove tracers when shooting the gun. For players that are engaging the opposite team aggressively, the angled grip is likely going to be a better option. Different sights are also available as attachments, the ACOG is the only 2.5x sight in the game, meaning it will zoom in further than the other sights, allowing more accurate shots.

There are currently 21 maps in the game, each map has between 3-4 objectives for all game modes. These maps contain multiple floors, and rooms with a varying level of destruction. Ubisoft are still updating the maps, as well as already reworking two to make them more balanced, and rebuilding two almost from scratch.

Again, there is a difference in map pools between Ranked and Casual. In ranked only 13 of the maps are available. These were picked by Ubisoft to be the most competitive maps. Whereas casual has all the maps in the game available.

Was this useful? Great! We'll also be publishing an esports related beginners guide shortly. Keep your eye out, but we'll make sure to include a link here once it's released.