With the full reveal of Operation Phantom Sight today, we bring you all the information about the new operators Warden and Nøkk, the reworked Kafe, and the revelation that the Season 10 Finals will be held in Japan.

At the Season 9 Finals in Milan today, Ubisoft revealed some highly anticipated details about the upcoming in-game season, titled Operation Phantom Sight. In the season to come, two new operators will be introduced -- the defender, Warden, and the attacker, Nøkk -- and the long-awaited rework of Kafe Dostoyevsky will be introduced to the game.

The location for the Season 10 Finals has been revealed to be in Tokoname, Japan, just 35km south of Nagoya. The event will be held from the 9th to 10th of November at the Aichi Sky Expo, with ticket pre-sale applications set to start on the 4th of June.

On defense is the US Secret Service operator, Warden. Garbed in a dashing suit with a thick mustache, his suave sunglasses hold the key to his gadget. Activating the gadget allows Warden to gain immunity to flashbangs and Ying candelas, reduces the existing effects of a flashbang or candela immediately, and improving visibility through smoke (somewhat like Glaz).

These Glance Smart Glasses work for eight seconds and can be canceled at any time, but have a fixed cooldown timer even if used for less than eight seconds. However, for the full effect of the smoke filtering to take hold, Warden will need to stay still, similar to how Glaz is being changed in this season as well. 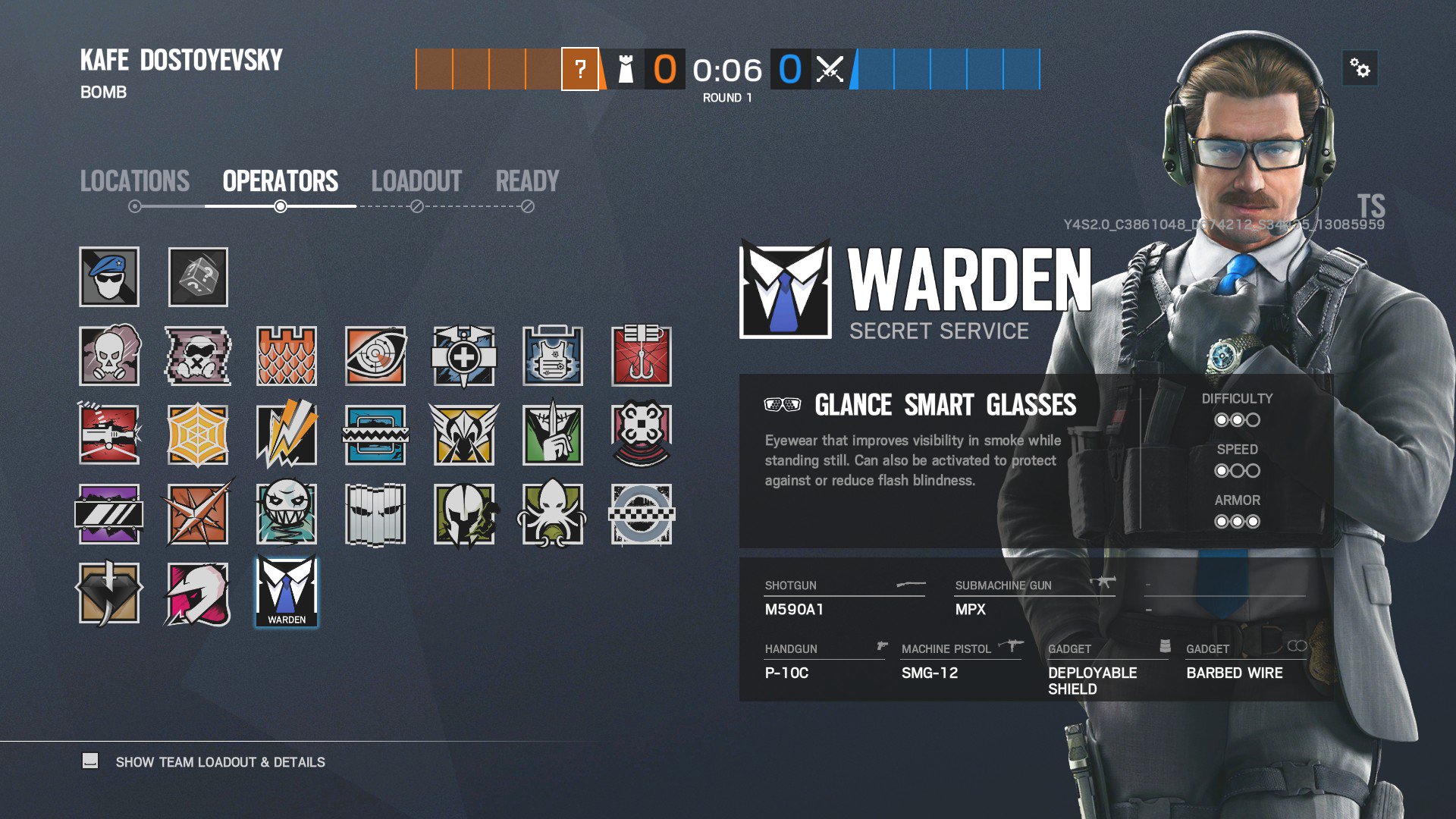 Warden’s kit will include the MPX submachine gun, same as Valkyrie (albeit with a custom reload animation) and the M590A1 pump-action shotgun as primary weapons. For secondary weapons, he has the P-10C pistol and SMG-12 machine pistol, and has the option for either a deployable shield or barbed wire. As he is 1-speed and 3-armour, it makes him an ideal operator to anchor on site, possibly bringing the shotgun-SMG combination to almost single handedly hold bomb sites.

His only direct counter is IQ and Thatcher, being able to detect or disable him while his gadget is active, while Warden himself will be able to deal with any operator using smoke grenades or flashbangs (or equivalent) against him.

Nøkk, the attacker, is seemingly an offensive mix of Caveira and Vigil. Shrouded in secrecy and mystery, the Dane’s HEL Presence Reduction gadget erases her visage from all defensive observation tools and reduces the volume of her footsteps. However, she will give off the same visual effect on Yokai and Mozzie-captured drones as Vigil does on attacker drones.

The HEL is activated for a maximum of 10 seconds, and does not need a full charge to activate (as compared to Warden), but deactivates when she shoots or sprints. One key difference from Caveira’s ability is that Nøkk is able to use her primary weapon with the ability active instead of being forced to swap to her secondary.

Nøkk isn’t entirely invisible to cameras, however, as a ‘glitched’ look will briefly appear on observation tools when she activates the HEL, vaults over objects, passes over barbed wire, or every time she takes a tick of damage from Gu mines and pulls them out.

Her primary weapon kit comprises the FMG-9 submachine gun or the SIX12 SD that Smoke and Lesion carry on defence respectively, while her secondary weapon choices are the 5.7 USG pistol or the D-50 Deagle which can also be equipped with a suppressor or muzzle brake. At 2-speed and 2-armour, she is a strong flank or entry operator, and can also bring either a claymore or breach charges to make her job easier. 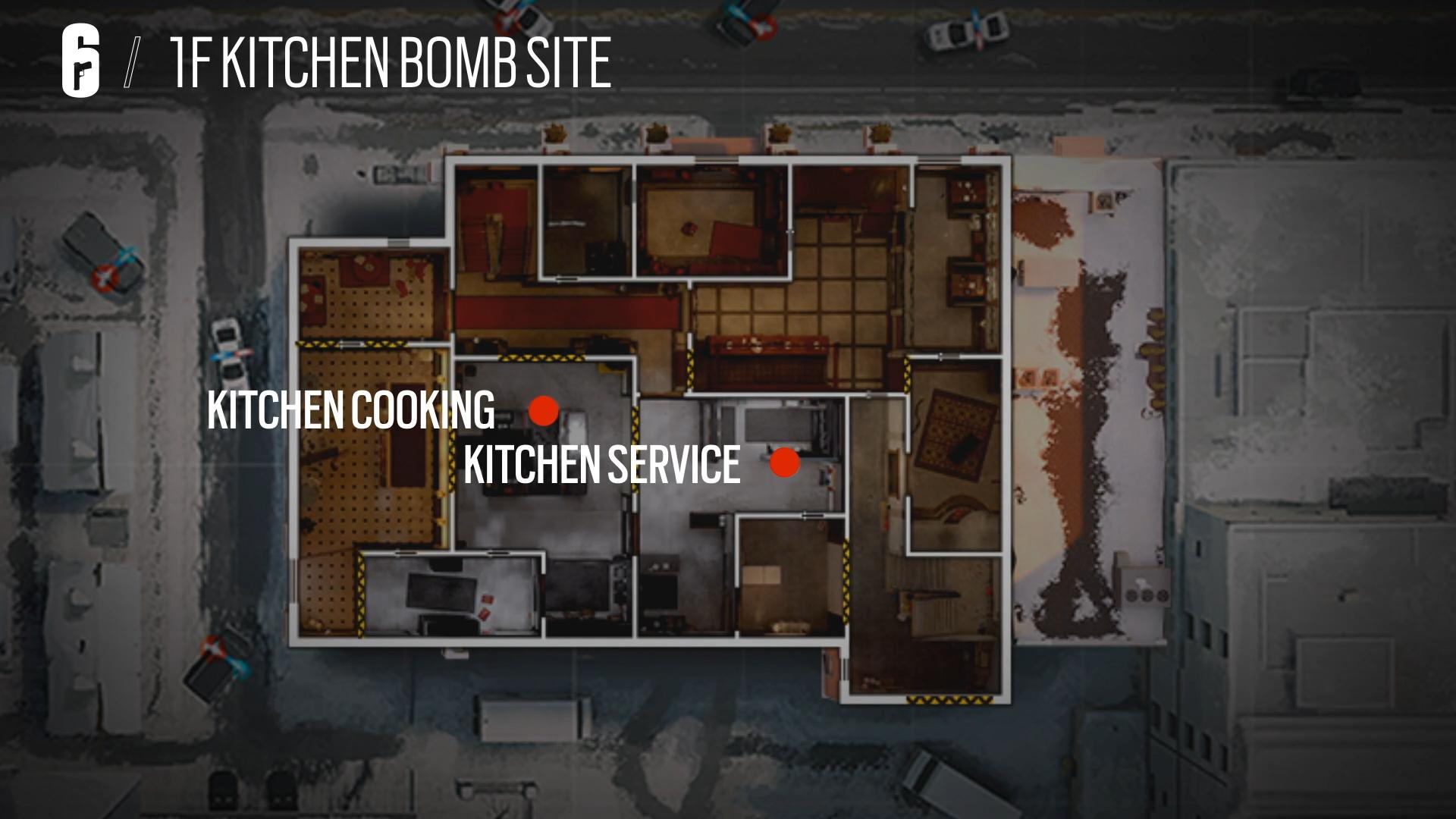 The first-floor Kitchen and Bakery bomb site has been moved inside to the Kitchen Service and Kitchen Cooking areas, created after the remodeling, giving defenders shelter from direct external attack and giving attackers a beachhead to start their final exectute from. On the third floor, the balcony has been extended across both sides all the way to the walls, leaving a hole to look down onto Red Hallway and the repositioned stairs below. The sides of the skylight have also been closed off to deny the pixel peeks that are oft-used by both attackers and defenders. Another change is the addition of a second hatch on the roof which allows access directly into the West-side balcony, located right next to the Cigar Room. 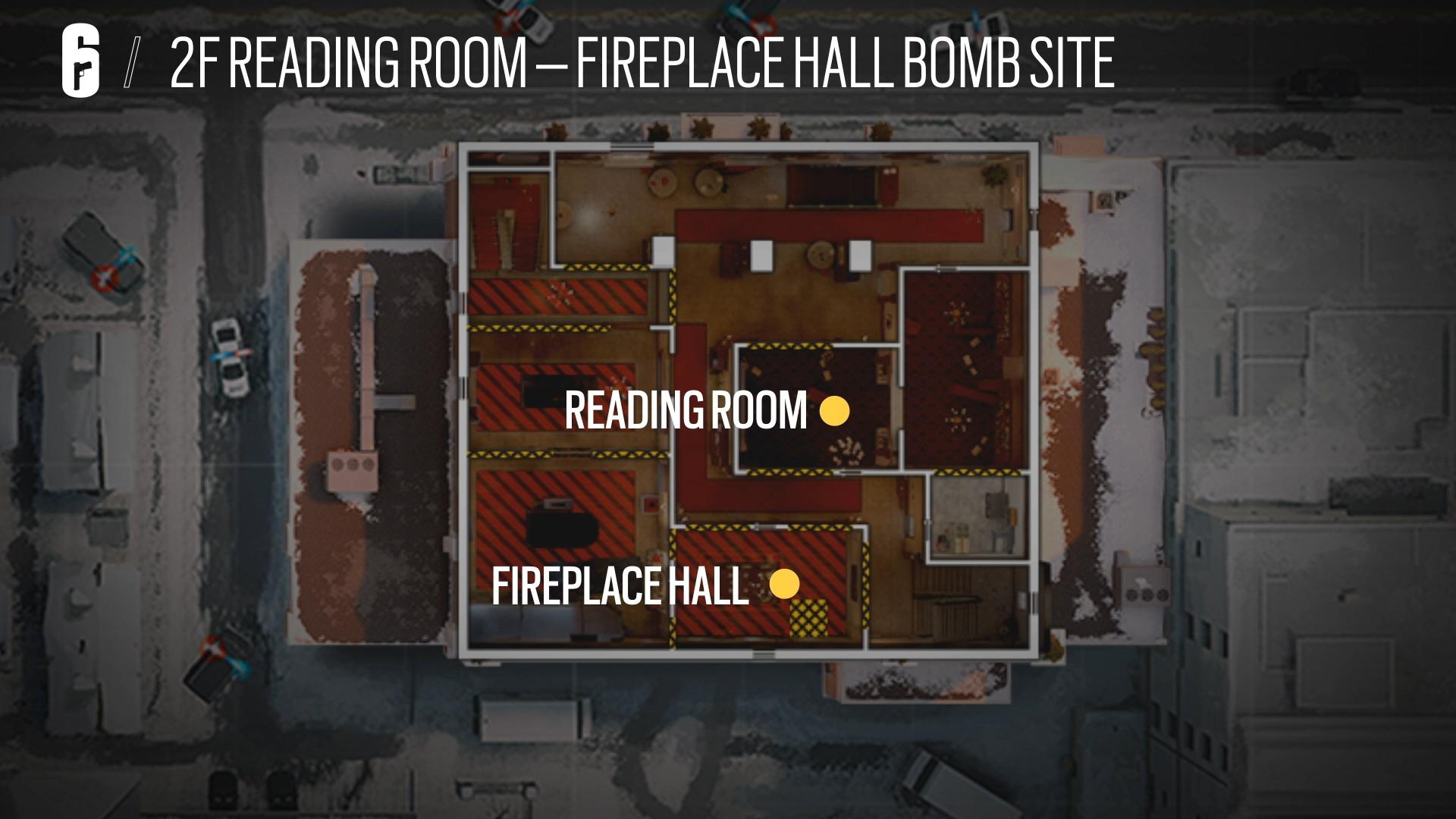 Also introduced is a new bomb site inside of the Reading Room which combines with the already existing Fireplace Hall bomb site to create a fourth objective. As a result, this opens Kafe up to the possibility of being introduced into the ESL map pool. Initial responses are mixed, with most pros choosing to withhold a full judgement until they have had the chance to play proper games on the map.

For more information on the rework, watch the map walkthrough below:

The new operators and new map will be available to play on Tuesday, the 21st of May on the Technical Test Server (TTS).

Catch the battle between Team Empire and Evil Geniuses in the Grand Final later today live on stream, and be sure to check back here at SiegeGG for more coverage of the Season 9 Finals.