Taking stock: Only six of 16 Sweden Major teams are currently in qualification spots for the Charlotte Major

Only seven of 20 SI 2022 rosters are also in a regional top-four position.

Currently, only six teams that attended the Six Sweden Major last November are sitting in a top-four position in their region required to qualify for the upcoming Six Charlotte Major in May -- Rogue, Looking For Org, DarkZero, Oxygen Esports, DAMWON Gaming, and FaZe.

OxG and DZ were the second and fourth-placed teams during Stage 3 last year and currently sit in first and fourth place as of writing.

Their two counterparts in Sweden, SSG and Soniqs, have had a weak stage so far (in dramatically different degrees) and sit down in fifth and ninth place respectively. SSG has Parabellum, Soniqs, and DarkZero yet to play making this week’s games absolute must-wins while short of a miracle Soniqs is already locked out of Major qualification.

TSM, the Rainbow Six world champions, missed out on the Sweden Major and currently are set to miss out on this stage also. Luckily for them, their schedule does get significantly easier with games against XSET, Soniqs, and Parabellum yet to come, however, it’s likely too late already. 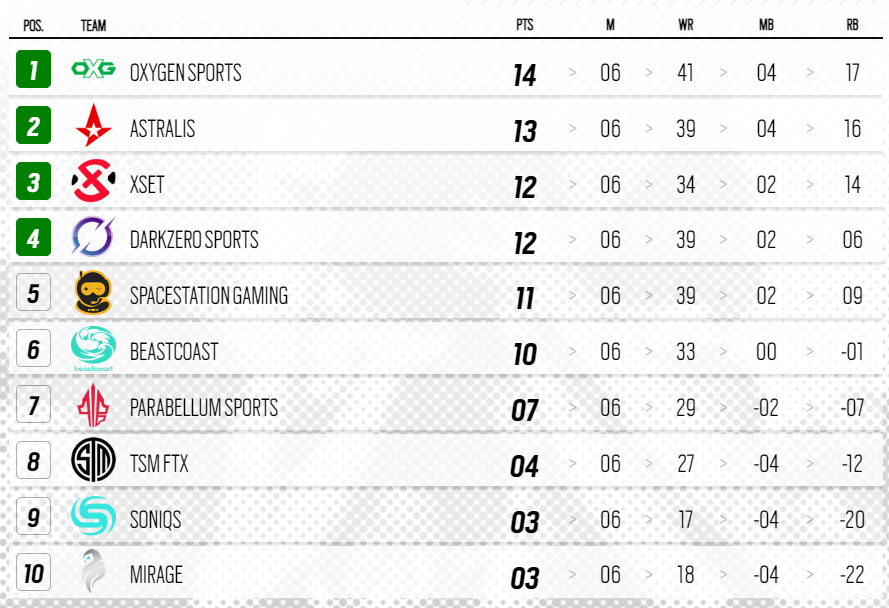 Over in Europe, the two consistent teams are last stage’s third and fourth-placed rosters, Rogue and the ex-Vitality lineup now known as LFO.

This is primarily due to the Team Empire roster being unceremoniously dropped between stages while BDS sits in fifth place, one point shy of G2 in fourth. These two rosters are also set to play each other on the final playday of the EUL season which could be to decide a Six Major spot.

The whole table can and will be changing constantly, though, as third to sixth are separated by just two points while Secret in eighth is only three away from G2 in fourth. 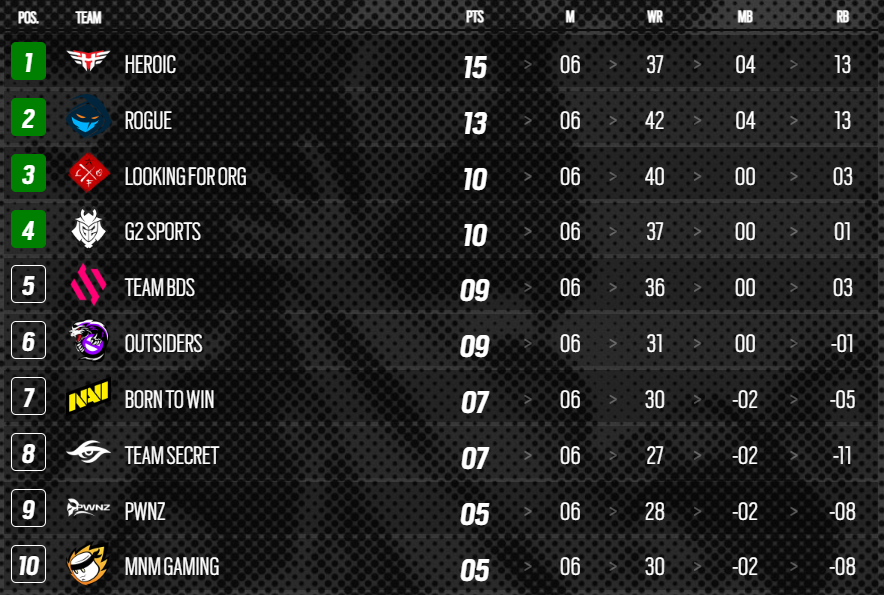 The four Brazilian teams which attended the Six Sweden Major -- FaZe, FURIA, oNe, and NiP -- currently sit down in fourth, sixth, ninth, and 10th place respectively. This is as while the Team oNe organization sits in second, this is with a drastically changed lineup with the core of the old oNe team now on 00 Nation.

Alongside FaZe in the top four is Liquid while MIBR sits tied on points with FaZe on fifth. Both of these teams missed out on Sweden meaning they’ll be eager to clinch the final two Copa Elite Six spots alongside w7m and oNe.

FURIA meanwhile sits just one point short of FaZe while NiP is locked out of a CES appearance in last. Finally, 00N in ninth does have a slim shot at a top-four finish with games against Liquid and MIBR yet to come. 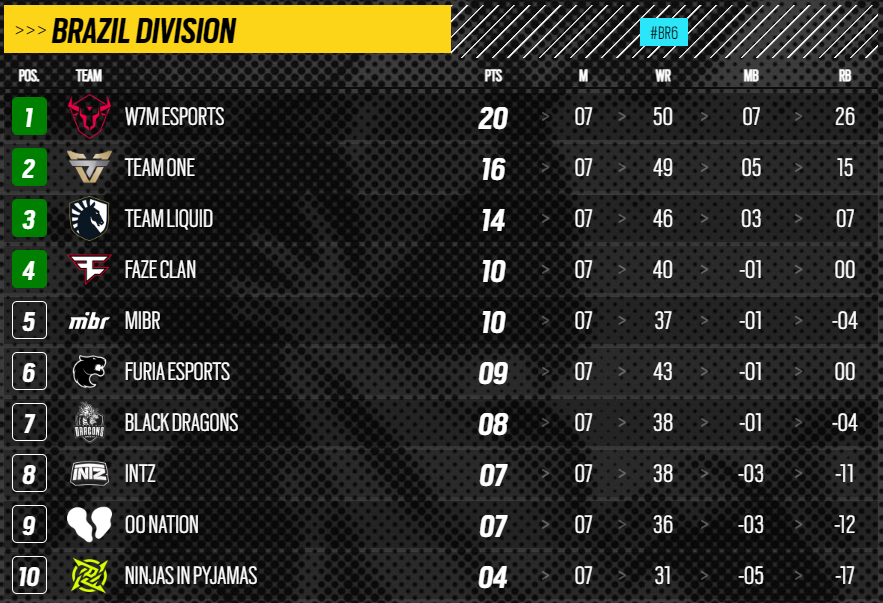 Finally, for APAC while the playoffs may throw up some discrepancies to this, I have looked at the top two teams in APAC North and APAC South with both leagues having just one playday remaining.

Starting with the South, they sent Invictus Gaming and Chiefs to Sweden. Ignoring the fact that iG changed the majority of their roster between stages, it is currently Dire Wolves and Elevate sitting in the top two positions while Chiefs is in third and Invictus missed out on the playoffs in fifth. 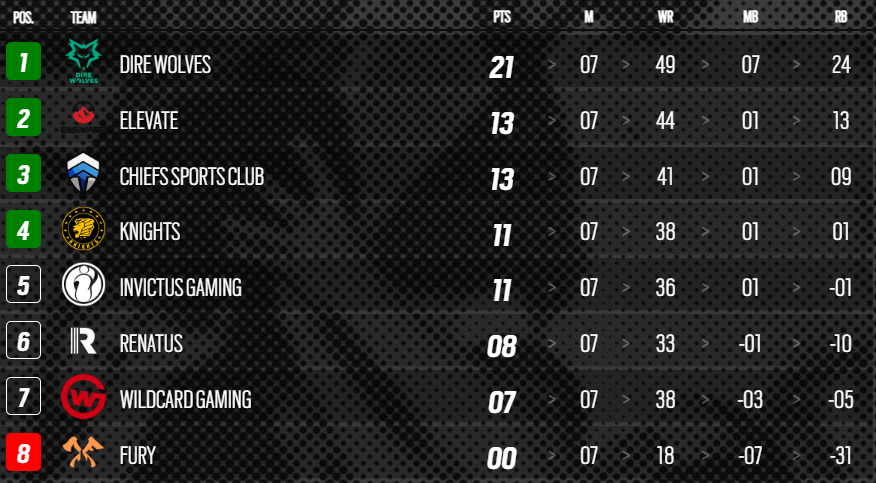 APAC North, meanwhile, sent DAMWON and SANDBOX to Sweden with these teams currently sitting in first and fourth place right now. In second place is a surprise entry, Talon Esports, while Japan’s top representative, CYCLOPS, is in third. 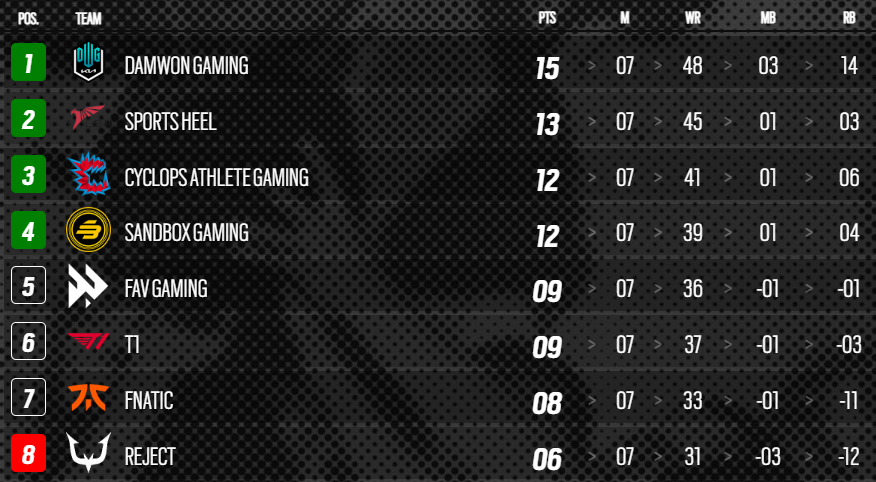 Looking at the 20 Six Invitational representatives instead, the number of teams currently set to make back-to-back global appearances is seven; Elevate, Liquid, and the six teams listed above excluding LFO.

Finally, there are currently two brand-new rosters that formed since the Six Invitational that are set to attend the Six Charlotte Major, XSET and oNe.