Play day three of the NA League is now over.

Here’s everything that happened in the first of two play days this week in the NA League.

Following on from their victory against Astralis and a close 7-8 loss against Oxygen last week, the mixed nationality Parabellum roster took down XSET 8-7 in play day three.

Throughout the whole game, there was effectively nothing separating the two rosters. In neither half did a team win more than two back-to-back rounds and neither team relied upon overly flashy plays. One thing that did stand out was Shaun "Gunnar" Pottorff’s performance; with a 1.33 Rating and six opening kills across the 15 rounds, he was instrumental in earning the victory.

A single kill behind him, sharing the Finka role, was the team’s French import, Alexandre "BlaZ" Thomas. Meanwhile, on XSET Evan "Yoggah" Nelson was the only player with more kills than deaths.

Later today, Parabellum will face DarkZero Esports, the reigning Six Major champions. With points won already against the three other Charlotte Major attendees, another win here would highlight Parabellum as a strong contender to win this stage of the NA League.

On Chalet, beastcoast took down Spacestation Gaming in a 7-4 scoreline. This happened after a fairly even first half turned into a bloodbath when beastcoast moved onto the offence, winning four out of the following five rounds.

Across these rounds, Sweater earnt an ace and two quadruple kills, which contributed to 21 total kills across the 11 rounds. This included five unanswered opening kills, while the rest of his team combined secured 22 kills between them. 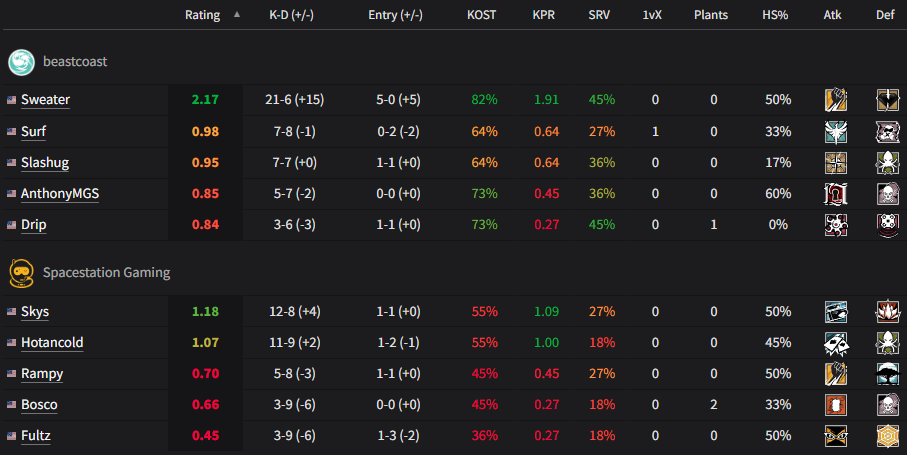 This result was reminiscent of bc’s 7-5 victory over Spacestation back in April, in which Sweater secured 17 kills to just five deaths. With how close this stage looks to be and with losses against beastcoast and XSET already, Spacestation will need to wake up quickly if they want to bounce back from missing the Charlotte Major.

Another late rally from Oxygen salvages their game

Oxygen and TSM both won their opening two games last week alongside XSET. That meant that with XSET having lost the first game of the day, three points from this match would take both teams to the top of the NAL.

With these stakes on the line, both teams didn’t give an inch. TSM kept on taking the lead, only for Oxygen to tie it back up each time.

At 4-5 down, Oxygen took a tactical timeout, hoping to stop TSM before they lost a chance at all three points. While misdroning Bryan "Merc" Wrzek cost them round 10, Franklyn "VertcL" Cordero won a 1v1 clutch the following round to add one back.

At 5-6, Oxygen then won three very clean-cut rounds, losing just five lives total, to win the game and gain two total points. This was largely thanks to Ethan "Nuers" James, who netted seven out of the team’s 15 kills across these three rounds. This means that last week’s three double victors are now tied for first place on seven points, followed by Parabellum on six.

Second loss in a row from DarkZero

Despite being the reigning Major champions, DZ have only won five rounds total in their last two games combined; two against SSG last Wednesday and now three against the Soniqs.

This game on Oregon was a pretty clear-cut one from the start. The lone round DZ managed to salvage on the attack involved a triple kill and plant from Troy "Canadian" Jaroslawski, while the Soniqs were quick to adapt on the defence to two quick round losses, ending the game at 7-3.

The man of the match here was undoubtedly Pablo "Gryxr" Rebeil, who secured 11 kills to just three deaths in what seems like a return to the untouchable form he had in Stage 1.

With the NA League’s competitiveness, DZ are already in a rough spot with just three points earnt in three games and with all the ‘top five teams’ yet to be played. TSM were unable to go to a second LAN in a row in Charlotte and DarkZero are now getting closer to following in their footsteps with a potential Berlin miss.

Business as usual from Astralis

Stage 1’s victors and last placed team met in the day’s final game, which was a result no one had trouble picking the outcome of. Aaron "Shuttle" Dugger secured more than five kills for each death, including a post-plant 1v1 clutch on the defence, on the way to a 7-2 win.

It wasn’t all bad news from Mirage though; despite Astralis’ status as the recent Six Major grand-finalists, Mirage out-fragged them on the entry and Astralis also required two clutches to win.

Nevertheless, this keeps Mirage on zero points. With Soniqs and TSM jumping back to form and Parabellum’s newest recruits pushing them up the rankings, the league is increasingly looking like a nine-horse tournament, with Mirage left at the bottom.