The Six Jönköping Major will run from Nov. 21 to 27 in Sweden. This is a week later than the usual Six Major dates -- usually the grand-final is the closest Sunday to the 20th -- due to the playoffs being a part of the DreamHack Winter event that will run from Nov. 24 to 27.

This one week delay is due to cause a lot of problems for R6 esports, regarding viewership and other issues that may be less apparent. Here’s why.

One of the most watched events in human history starts on Sunday.

According to FIFA, an estimated five billion people will watch the Football World Cup over the next month and almost every team will kickstart their World Cup campaigns during the Six Jönköping Major.

As such, Rainbow Six will definitely lose viewers to the World Cup, however, how many is hard to judge.

Luckily, these will only be the opening games of the World Cup and there will be no knockout or grudge meetings overlapping with the Siege matches. On the other hand, the World Cup favourites are Brazil and France… who make up almost 40 percent of all players at the Jönköping Major. Some of the biggest nations in Siege are also the biggest competitors at the World Cup, meaning the the two events will have a clashing audience.

For instance, France will play their debut World Cup game during the key Team BDS vs SSG matchup that could be a Group C decider and the Major grand-final will clash with Spain vs Germany, one of the most anticipated matches of the World Cup groups.

While Americans are less enthralled by “soccer”, America’s favourite holiday also takes place next week on Thursday, Nov. 24. Luckily for Siege, this is the scheduled media day and it means that no games will be played this day.

On the other hand, family get-togethers around the country will be happening over the weekend and it’s possible that the younger-skewing Siege esports audience will not get to decide what’s on the family television.

Thanksgiving is also a popular time for family holidays, meaning more fans than usual will not have access to their PCs over the weekend.

Within the esports world, next week will also see Counter-Strike come to Scandinavia as the Blast Fall Finals are played in Copenhagen from Nov. 23 to 27.

This tournament includes some of the biggest CS teams in the world, including FaZe Clan, Heroic, and Natus Vincere. As it is also taking place in Europe, its games will clash with the R6 Major playoffs throughout and will take a significant amount of social media chatter, media and streamer coverage, and eyeballs away from the Siege event.

The Free Fire World Series Bangkok will also be taking place next week. Free Fire is one of the largest esports in the world with a massive following in Brazil and next week is its biannual World Championship event.

For context on how big this is, 2021’s most viewed esports event was the Free Fire World Series in Singapore, as it attracted 5.41 million viewers; 1.4 million more than the LoL Worlds and double the view count of The International. An incredible 1.06 million of this total was from Brazil alone. Between Free Fire and the World Cup, Siege has tough competition to attract Brazilian audiences, no matter how well they perform.

In almost every single quarterly Siege esports championship -- the Six Invitational, Six Majors, or Pro League Finals -- in the seven years since the game released, details about the upcoming free DLC has been unveiled on the Sunday of the esports tournament, just before the grand-final.

This has the great bonus of boosting the grand-final viewership, as more casual fans who tune in to learn about the new Operator and Map can then stick around for one of the highest quality games of Siege they will ever watch.

The upcoming Operation Solar Raid panel will take place on Monday, though, the opening day of the Six Major. It is very likely that viewers do not stick around to watch the Major afterwards, especially since the games on offer will not have as high stakes as the grand-final. 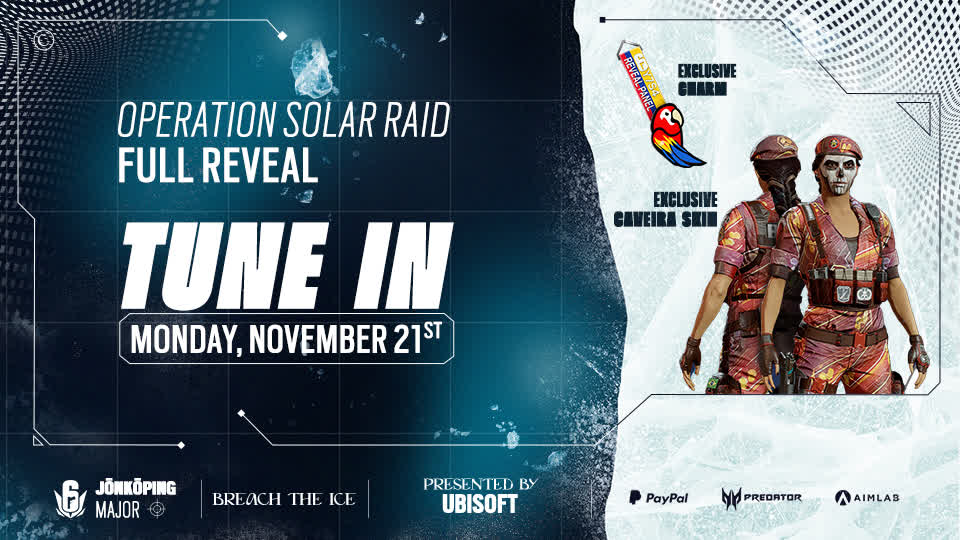 While not directly related to the chosen dates, the chosen time for each game will also likely hurt viewership, as they’ve seemingly thrown out usual wisdom.

For European events, you’d want APAC teams to play first before it gets too late for their fans back at home and North American teams to play last to allow the West Coast fans to not miss games before they wake up.

While this can’t be scheduled perfectly, this was largely the case for the Six Berlin Major. For the Jönköping Major, every region plays half their games in the first half of the day and half in the second half. There’s seemingly no thought about local time zones when scheduling games.

Instead the order is based on groups. Every day, Group A plays first, then B, then C, then D, and then they restart from the beginning. With one team per region in each group, this leads to games being spread out across the day. This means that the average game start for APAC teams in Korea and Japan will be after 11PM and after 1AM in Eastern Australia.

On the other hand, for West Coast Americans the average start time for NA teams is 6AM.

Spreading each region’s games around the entire day will definitely hurt viewership. The average R6 fan that tunes in for the group stage likely only cares about a few favourite teams or players. They aren’t going to want to wait five hours between TSM's first and second game each day, especially if they’re taking place in the middle of the night like for APAC teams.

It seems pretty simple to air games when viewers want to watch them, rather than scheduling half of SANDBOX’s games at 2:30AM Korean time and every Soniqs game between 1:30AM and 6:50AM in California.

November 21 to 27 is possibly the worst time Ubisoft could’ve picked for the Six November Major. In particular, next week’s Six Major will probably have the biggest issue attracting and holding casual viewers than any major Siege esports event to date, which will be a massive shame considering how well the Berlin Major did viewership-wise.