Breaking down: Spacestation vs DarkZero for a ticket to Charlotte

On Wednesday, the final home team for the upcoming Charlotte Major will be determined in a straight head to head between DZ and SSG.

In October 2018, a single best-of-one map head-to-head between Rogue and SK Gaming was to decide which team was going to attend both the Pro League Season 8 Finals and the 2019 Six Invitational.

After nine rounds, it came down to a Rogue attack onto Coastline’s Billiards objective as SK’s Matthew "Hotancold" Stevens suffered the opening death. As Rogue began their execute, Hotan’s teammate of two years, Kyle "Mint" Lander, got SK on the board before being put into an impossible situation. Mint needed a 1v4 ace clutch to qualify for both the Rio and Montreal events: his death meant Rogue would qualify.

Three kills later, Mint was in a 1v1 against Tyler "Ecl9pse" McMullin and in one of the most impactful online kills in R6 history, Ecl9pse sent Rogue to their eighth global LAN across nine tournaments.

This was the SK Gaming organization's last round in Rainbow Six. The roster joined the newly launched DarkZero Esports one month later. With the Season 8 and SI 2019 events missed, DZ dug in and went on to attend eight global events in a row from Season 9 in Milan to SI 2022 in Stockholm, a longer streak than any current team.

On April 25, three of these 10 players are back in a very similar position as DarkZero plays a head-to-head, best-of-one against Spacestation Gaming to determine who will attend the upcoming Charlotte Major, with the loser watching from the sidelines. While Mint once again fights for DZ, he now does so alongside the player that bested him four years ago, Ecl9pse, and against his longest-tenured teammate, Hotancold.

Let’s break down what we can expect to see in the biggest game of the 2022 Season so far.

Who’s got the head-to-head lead?

Looking at the two organizations across their three years of history playing against each other, SSG has definitely had the best record winning 21 maps to 14.

Cutting this down to just LAN games in the North American League, DZ has won four out of six series and seven out of 12 maps. Since Nick "njr" Rapier joined from Disrupt Gaming at the beginning of 2021 the team has looked a lot stronger managing to beat SSG in three out of the four NAL 2021 meetings despite SSG winning stages two and three very dominantly. 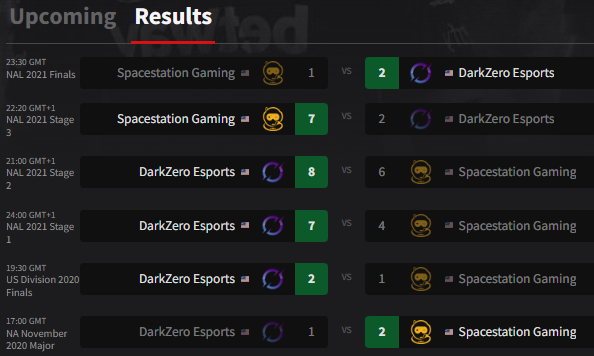 While the numbers are in DZ’s favor, the last time these teams faced in a best-of-one SSG won 7-2. This was also the only best-of-one played with the current 10 players. This dominant SSG win did come in a stage in which they took 21 out of a possible 24 points, though, and they haven’t been showing such a strong performance during this stage.

With both teams sitting within one point of each other there’s clearly not a lot separating each team during this stage, however, there’s still a lot to unpack.

SSG did get a key win over XSET which DZ failed to do, however, this was in XSET’s debut game which almost certainly would’ve made the matchup easier for them as new teams need time to settle. On the flipside, somewhat equalling this out, SSG’s most recent game was a loss against a revitalized Soniqs roster. DZ managed to beat Soniqs before they kicked into gear last week. 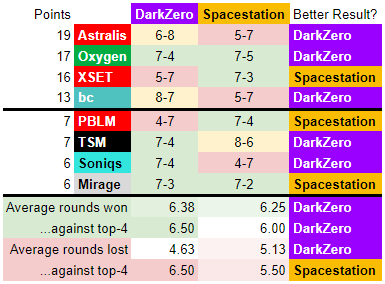 Looking at the remaining games, DZ got two impressive results by beating TSM and beastcoast, albeit the latter game in an 8-7. SSG meanwhile dropped a point against TSM and lost to bc. This advantage was squandered as in playday three of the stage Parabellum scored three points against DZ with a 7-4 victory, points which SSG didn’t drop.

For both teams, if they hadn’t lost in an upset against Parabellum and Soniqs they’d be sitting in second place and arguably one of the favorites to win the Charlotte Major. Instead, the result has put them in a precarious fight for fourth and shown there are wide gaps to be exploited.

On face value, there’s effectively no difference. However, if you exclude the results against XSET which SSG arguably got very lucky by facing on the first playday, the overall results look a lot more favorable in DarkZero’s direction.

Looking at the players themself, the big red flag is Hotancold as while isn’t performing terribly, he has dropped off a cliff compared to his NAL stage SiegeGG ratings of 1.23, 1.33, and 1,48 since he left DZ at the beginning of 2021. With a current rating of 0.96 and with no SSG player taking his spot with an overall rating this high, this stands out as the most obvious reason why SSG is fighting for fourth rather than first.

There is an obvious upside to this as if Spacestation can unlock the level of play we’ve seen Hotan can reach, they’ll likely perform closer to their regionally untouchable levels seen last year. This probably hasn’t happened within just the last week, though.

For DarkZero meanwhile, their player to watch is probably Roberto "Panbazou" Feliciano as he’s been performing lower than expected against the top teams. While the roster’s newest player has been holding his own when looking at his stage-long statistics, this is as he’s “overperforming” compared to the rest of his team against the lower-ranked teams and then slinking below the team’s average in the more important matches. 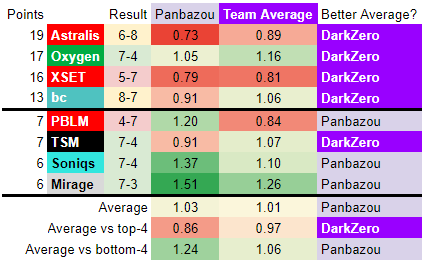 DarkZero’s win against Oxygen and loss against Parabellum shows the team isn’t overly reliant on an exceptional Panbazou’s performance. Nevertheless, if he can switch on to a greater degree than we usually see in games of this calibre, DarkZero should be able to guarantee a Major invitation.

DarkZero has a slight advantage coming in as they’ve shown they have a wide map pool, have the better historical record, and arguably have a better recent run of results. Both teams have likely been hiding some maps meaning it’s possible that the pre-game ban phase will ultimately make the difference in the game.

With such small margins in play, a standout few rounds from a single player can decide the match, and both teams have players that have performed in high-pressure scenarios before. Ecl9pse and Hotancold both know what it feels like to miss out in a situation such as this and could be either team’s key to victory if they turn on for this matchup.

The game will take place on Wednesday night at approximately 4pm PT (GMT-7).