With the dust settled from Ubisoft’s plans for China I believe it's time to talk to about why the reversal, whilst not detrimental, is a mistake for the game.

At the start of November, Ubisoft announced that they were going to be making some visual changes to a variety of maps in preparation for its official, full-fledged launch in China. This included removing blood, gambling paraphernalia, and sexual content. Due to a community backlash, as well as multiple reports in gaming media, Ubisoft reversed the decision and publicly announced the reversal on the 20th November.

My very first reaction to the proposed changes was “Ubisoft... why?” but after a while I began to understand the changes. In the recent age of game development we've come across a phenomenon of a playerbase not knowing what it wants. We can see it within Siege itself. The community asked for Bartlett University to be added to the multiplayer map pool. Then, when the player base actually got their hands on it, the map was awful and the vast majority hated it. I believe this to be a similar case with players not taking into account the long term benefits the changes would make.

The magnitude of the backlash against the changes announced for the Chinese region was peculiar to me. It’s no doubt the laws in China are backwards and don’t make any sense, not having blood or skulls in a shooter is silly. However in reality the changes were minimal and didn't really affect gameplay, and whilst I do think some changes were negative, others like the skull on Clubhouse were actually an improvement. Yet, this is one of the biggest frenzies I’ve seen the community thus far, overshadowing the cries about Operation Health, the shotgun era and the removal of the standard edition of the game. 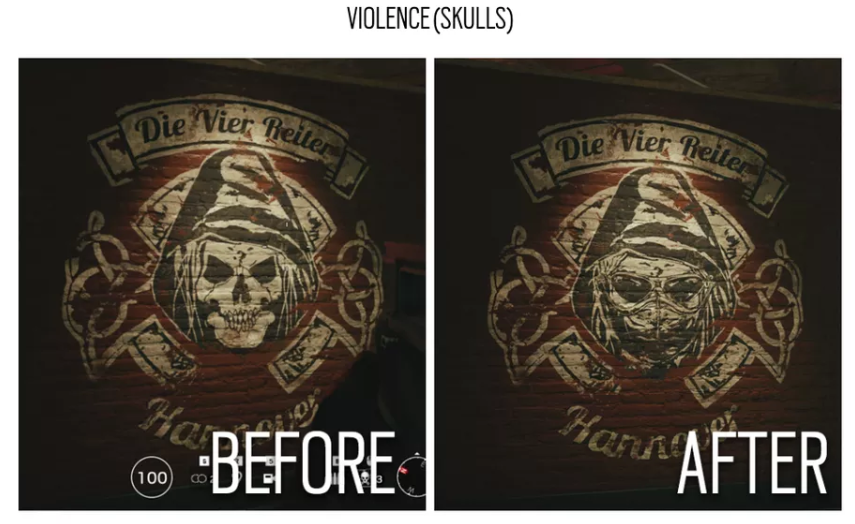 For those of you not too familiar with the current community in Siege, there is a big division between fans and members of the competitive scene and the casual scene. These changes certainly were no exception -- there was little public outcry from the competitive side when these changes were announced, most being in favour of expansion for the game, whilst others mostly felt indifferent to them. The casual community, on the other hand, were in hysterics about the changes; Reddit was a mess, followed by YouTube and Twitter. It’s important to remember these changes are not for boosting sales in China, but so that the game can legally be sold in the region. One of the most disappointing things I noticed was the large amount of false information being spread. I saw Reddit posts talking utter nonsense, and even bigger community figures putting out straight up false information.

Now that Ubisoft has reversed their decision, it sets a precedent that whenever the community throws a tantrum, Ubisoft will back down. I believe this creates a toxic environment for the community, and furthers an us vs them divide when it comes to both the general community vs Ubi and between casual and competitive communities. I think Ubisoft, in this case, felt like the changes to the game were a positive. However, pressure from the casual community, which is by far the biggest in Siege, meant that sticking to their guns could hurt their public image, especially when the media gets involved.

The main reason Ubisoft are preparing for release in China is the fact that the Chinese mega corporation Tencent saved Ubisoft from a hostile takeover against Vivendi, and in doing so Ubisoft gained consent to sell games legally in China through Tencent's platform. In order to get the games sold legally, these cosmetic changes needed to be made, otherwise the deal would be pointless. The way to keep these changes cost and time effective was to make the changes to all versions of the game. Now, due to the reversal, Ubisoft are going to have to put extra work into a Chinese client. We already have enough issues with the console versions of the game slowing down patches, and now the developers are going to have to spend extra time and money on porting stuff over to the Chinese version. Furthermore, this stretches monetary resources thinner as well.

Rainbow Six: Siege isn't the only game Ubisoft are preparing for release in China. For Honor recently saw a new Chinese faction added to the game, a great marketing tool for the game’s release in the region, as part of the same deal with Tencent. As I mentioned in my Rocket League opinion piece, Rocket League is also planning on bringing their game over to China through a partnership on the Tencent platform. Whilst I'm not too sure what has changed inside the Chinese version of Rocket League, the game itself will not be a paid game in China but instead Free to play. CS:GO also exported to China in 2017 and had a similar problem in which they needed to remove some details in the game. However, Valve decided to go down the route of just making a Chinese build of the game as Ubisoft have now done.

According to The Esports Observer, the esports market in China is expected to grow to $1,500,000,000. China is one of the biggest regions in esports, especially when you look at MOBAs. Rainbow Six Siege has the perfect conditions for a huge boom in China with its tactical gameplay and MOBA elements in the operators. With this in mind, it makes complete sense that Ubisoft wants to fully expand into the region, as there is already a Siege scene in China. Recently we saw the announcement of the China Nationals LAN in Shanghai with a $12,000 prize pool. We also saw the Chinese team uL Gaming participate in the the Six Invitational 2018 show match. China even has their own version of the Pro League, and while I would’ve liked to have given some statistics about this but unfortunately was unable to find them in time for publishing. It would be no surprise with this information if China gets added to Pro League at some point, even if it’s done by just including them in the APAC region. We have already seen what adding LATAM and the other APAC sub-regions have done for the scene and I think the more the scene grows the more these regions can bring.

So, to summarise this opinion piece, I think whilst the laws may be backwards, the changes made by Ubisoft made a lot of sense for all communities in the game and from a business perspective. I think the reversal of these changes will have a knock-on effect further down the line and add even more pressure to the developers. This will decrease the speed of bug fixes and development and with the recent postponing of Pro League, I don’t know if the game can grow with an even slower turnaround of bug fixes. As well as this, it teaches certain members of the community that they can act immaturely whenever they don’t like a change and Ubisoft will buckle.