Discover what happened during the final day of European Pro League.

We kick off the final day of Season 8 with a matchup between Vitality and PENTA, which seemed to have been plagued by both human error and game crashes, lending to four rehosts and PENTA having to forfeit the sixth round after the second rehost due to not picking the same operators as they had prior to the rehost. This put Vitality up with a 4-2 lead after the role swap, and after a loss to PENTA, turned the match point in their favor at the end of round eight. However, with humongous frags from Hungry and RevaN, PENTA is able to close the two-round gap and end it with a tie between both teams. RevaN and Zephir would prove to be at the upper echelon of this match, with a 1.49 and 1.26 Rating, respectively.

Coming off of a tie against Team Secret last week, Mock-It had locked themselves in a battle for second seed against Millenium. And the matchup did not disappoint, with a tug-of-war between both teams in the first half. At the end of the sixth round, Mock-It picked up their footing on the defense to land a four-round streak that gave them the win- and punched their tickets to head to Rio. Vale of Mock-It stands out overall, with a 1.49 Rating and 3.33 K/D. Notably, this win would also actively deny Team Secret their chance of making LAN.

With no effect coming from a win for either team, this matchup would prove to be much more of a ‘relaxed’ playstyle from G2- who also had subbed out Pengu for their analyst, Ferral, as a fulfillment of Ferral's dream to be a Pro League player. Blowing through the first half, the relaxed nature of G2 was as clear as day- notably Goga’s picks on Tachanka. On the sixth round, G2’s “shield meta” attack lineup would prove to be victorious- ending the game on a 6-0 blowout. Kantoraketti’s 1.79 Rating, 3.33 K/D, and sharing a 1 KOST alongside Fabian and Ferral shows just how effective this team ended up becoming.

With the Mock-It/Millenium match showing a definite conclusion, Team Secret would only have grudges to settle out of their matchup with Chaos. Halfway into the game, the advantage would be in the hands of Team Secret, as they forced the game into match point after the eighth round. The game, however, would go in the favor of Team Secret shortly after for a 6-3 victory. Krippz would be the standout player with a 1.25 Rating, not to detract from MeepeY’s 1.22 Rating and some incredible frags from Lacky.

These are the final standings in Europe after 14 playdays: 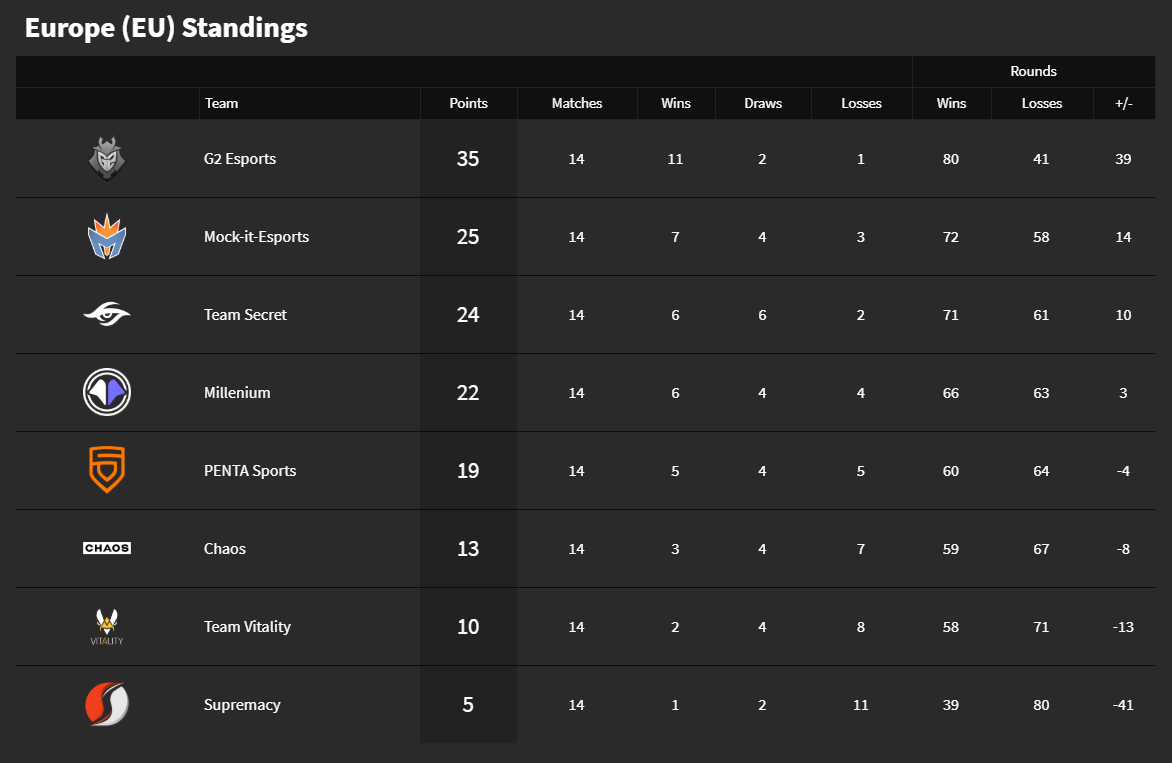 With the events of Pro League Season 8 at a close, we look towards the horizon and the Season 8 Finals in Rio de Janiero- which you can catch on the official Twitch and YouTube channels starting November 17th. To see all the upcoming games schedules, go to our Matches page, and check out completed games stats by clicking on the individual games.