Catch up on what happened during the European Pro League Play Day #9.

G2 extended their first place lead by confidently beating Millenium, who now find themselves down from third place to fifth. Despite Joonas not being very effective on Clash, and having the numerical advantage multiple times, Millenium was unable to capitalize on that lead. Thanks to a strong performance by Pengu (including a 4k) and Fabian, G2 won the match in another “G2 = 6-2”.

Supremacy, fighting to climb out of the auto-relegation spot, did not manage to find their first victory, even against a Mock-it roster with two relatively new players. Mock-it underestimated Supremacy on the first round of the match, but the French roster was unable to repeat this as they seemed to lose most of their gunfights, notably against Korey who ended the match with a whopping 15 kills and a 2.14 SiegeGG rating!

Chaos keeps up their hopes of escaping the relegation zone by securing 1 point against an unconvincing Penta roster. Chaos was leading four rounds to none before Penta clawed back to 4-4, with the match ending on a 1v1 narrowly lost by RedGroove.

In a rematch of the Paris Major quarter-final where they had lost 6-2, 6-1, 6th-place Vitality this time fared much better against second-placed Team Secret. In what proved to be a very defence-sided match (only two defence round wins), Vitality stays two points above the relegation zone, while Team Secret’s second place lead is itself reduced to two points.

These are the standings in Europe after 9 playdays: 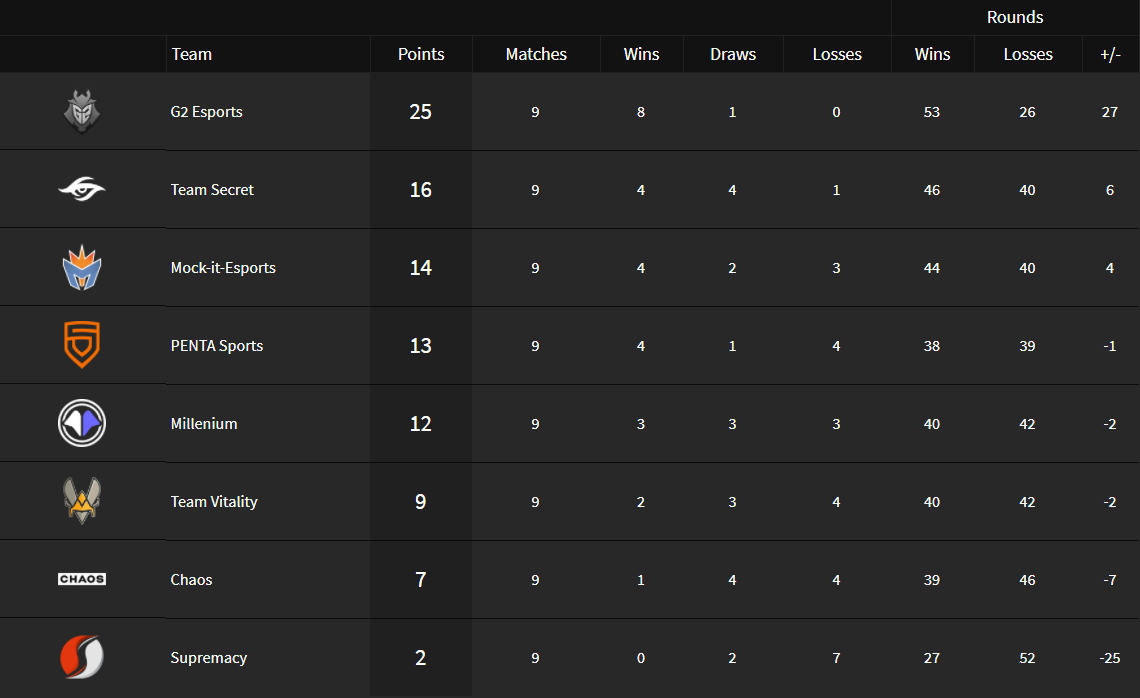 Be sure to catch Day 10 of European Pro League on the official Twitch and YouTube channels on Thursday, September 27th at 1 pm EDT/7 pm CEST/2 pm BRT. To see all the upcoming games schedules, go to our Matches page, and check out completed games stats by clicking on the individual games.