Catch up on what happened in Play Day #7 of Latin American Pro League.

To start our first match of Play Day #7, Team oNe banned out Hibana and Maestro, while Liquid removed Dokkaebi and Mira. Liquid looked strong utilizing an unbanned Blitz in a few rounds to take dominant control of the map for a 4-1 lead on attack. Team oNe only saw life in round 3 after leaving Bullet in a 1v3, but showed their competence in switching to attack, eventually taking the number 1 seeded Liquid to a tie. Team oNe have been trending upward through the standings recently and will look to hold onto their momentum when play resumes after the Paris Major break.

The second match of the day featured Faze banning Lion and Vigil, and Black Dragons taking out Montagne and Mira. FaZe started off strong with Astro taking advantage of BD on the roam game to give his team a 4-1 lead going into the side switch. Their consistency would continue into their attack where they finish with a clean 6-2 win. With this victory and our earlier tie, FaZe now move just behind Team oNe in the standings based off of round differential.

For the back half of our seventh play day, NiP began with a ban on Twitch and Maestro, while IMT banned Lion and Smoke. NiP started off strong with an essentially flawless round 1, however IMT would recover and end the first half in a similar fashion, going into the side switch at a 2-3 deficit. NiP was able to start this half with a strong Blitz performance but threw the round away at the last second to allow IMT to tie the game. Their late round missteps would continue with multiple losses coming not only with very little time remaining, but after having man advantages and not being able to effectively trade kills. IMT takes this match 6-3 and NiP falls deeper into the danger zone of auto relegation.

In the final Pro League match before the Paris Major break, BootKamp and PaiN Gaming would face-off on our third showing of Oregon for the day. BootKamp started with a ban on Montagne and Maestro, while PaiN banned Ying and Echo. PaiN would start off having trouble dealing with BootKamp roamers, especially Lipe and Paluhh, who started off the first 3 rounds 6-0 and 4-0 respectively. BootKamp looked absolutely dominant in this match, even going so far as to bring shotguns on their GIGN operators in their sole attacking round. BKG takes a clean 6-0 to eclipse PaiN in the standings as they are unable to find any stable footing in this matchup.

These are the final standings for the first half of the season of LATAM Pro League: 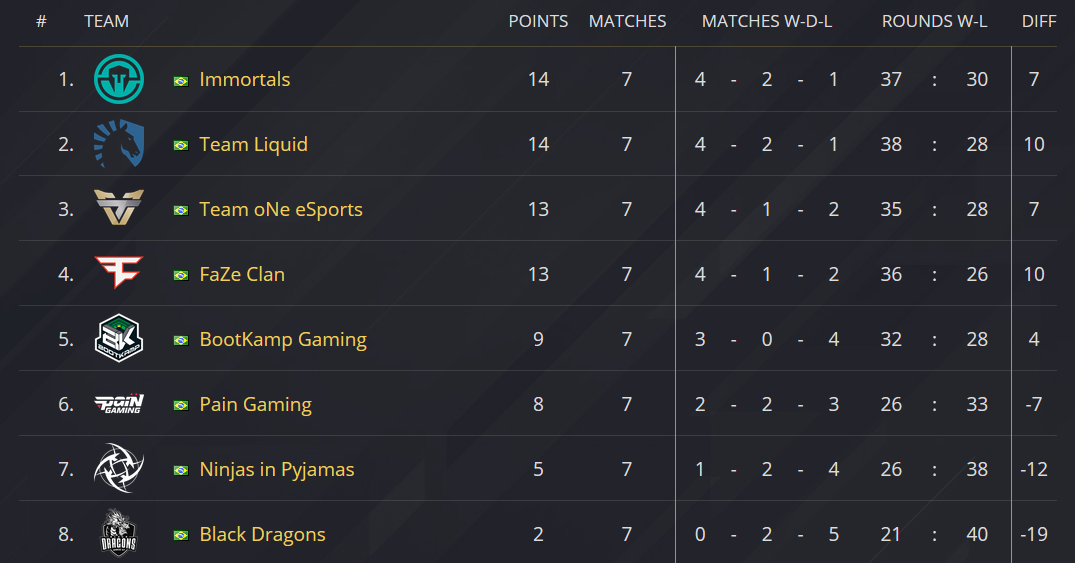 Be sure to catch Day 8 of Latin American Pro League on the official Twitch and YouTube channels, when it resumes on September 12 at 7 pm BRT, 6 pm EDT and 12 am CEST. To see all the upcoming games schedules, go to our Matches page, and check out completed games stats by clicking on the individual games.