The last two weeks have seen some drastic changes to team rosters and organisations leading into season 8 Pro League, and the Asia-Pacific (APAC) region has been no exception.

Earlier this week, ANZ team Dark Sided announced their newest addition to the roster in speca, a former player for Verdict. In the wake of the move, Verdict unexpectedly disbanded due to multiple reasons including not being able to fill the 5th position before roster locks and lack of a sub. Due to Verdict being dissolved, it meant that there was now one spot in the ANZ Pro League up for grabs.

The only fair way of determining the team for the final spot was to complete an ODC, or One Day Cup. It was decided this was the best way forward, and four teams including the likes of TBD, Outlaws, Obsidium, and Eclipse were invited. They competed against each other in a two-round single-elim Best-of-3 bracket, played under the new 10-round Pro League format, in which the winner would be promoted and claim the final ANZ Pro League spot. The scores for each game can be found below, along with the bracket. 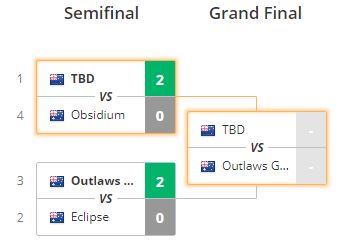 The Grand Final between TBD and Outlaws was an extremely close and well fought out series by both teams. Outlaws started out strong, taking Border in round 13 after a back and forth map that looked like it could have gone either team's way.

Map 2 saw TBD step up from their previously lost but close map, and took a quick 6-1 scoreline after exploiting their opponent's weaknesses on this map. Clearly, they were not done yet and were willing to fight it out in the last map.

On the decider of Oregon, though TBD put up a valiant fight, the Outlaws side seemed to be in control for most of the map, excluding a late attempted comeback from TBD. Outlaws came out on top, winning 6-4, thus sending themselves into the ANZ Pro League for Season 8.

SiegeGG got the chance to exclusively speak with Calibre, Sirrom, and Bundie right after their series win against TBD.

As one of the players in your team to have competed in Pro League before, how does it feel to not only to achieve it again but do it with your current team?

Calibre: “I never thought I would come back to Pro League after my first season, but Sirrom asked me to join the team and see how I felt. After the two or three weeks we have been together, we didn't have a finalized roster until the Sunday before this playoff. Now I am happy to say that I'm glad I made the comeback and can't be happier with the team I joined. The instant cohesion has shown we have huge potential and we all want to see how far we can go.”

There was no doubt some uncertainty and speculation if the team would get a new roster after previously being relegated. How proud are you to have stuck it out and now achieve your ultimate goal as a team?

Bundie “After dropping out of PL in the last relegations, the team had a period of uncertainty, until Sirrom rebuilt the team back up with some insane players from UGZ and pulling Calibre out of retirement. All in all, though I'm super proud of the boys and can't wait to see how we do in the upcoming PL season”.

Were you worried about the lack of preparation due to the recent announcement of the qualifier and the lack of experience in competing against higher tier teams with a newer roster?

Sirrom “Having only finalized our core with Bundie on Sunday, a lot of the odds were against us, especially with our lack of experience in the higher leagues. Which is what makes it feel so good at 3am here in NZ chanting "LETS GO BOYS" as we take out the win -- everyone was speechless. We worked so hard for this and really came together as one unit to take the win home for Outlaws Gaming, I couldn't be more impressed, proud and pleased to have such a great and talented roster behind me.”

As such, the Outlaws roster for Pro League Season 8 is as follows:

The team is scheduled to play Athletico Esports as their first game of the season, although the date hasn’t been confirmed due to the recent delays with Pro League. Catch the team in action at twitch.tv/Rainbow6ANZ from 7PM AEST onwards to see how this new roster fares.

#9 Player of Year 5: Rampy
More news
We use cookies to improve your browsing experience. Learn more