The all German roster has set up a fundraising campaign to pay for the costs of going to DreamHack Valencia.

The roster consisting of Vale, PARAA, KS, ripz, Hungry and Lazzo (their coach) came joint 3rd in EU during Pro League season 7, under the organisation 1UPeSports, before leaving to “look for better opportunities” shortly after the regular season concluded. Despite having high hopes of getting a new organisation before the new season begins they have yet been unsuccessful, meaning they don't have the financial support to attend the upcoming DreamHack tournament.

DreamHack Valencia will take place from the 12th to 14th of July in the centre of the Spanish City of Valencia. The tournament will see 12 Pro League teams and 4 “Bring Your Own Computer” teams play for a chance to, not only take away part of the $50k prize pool but also get a free qualification spot to the Paris Major in August should they win.

Without an org this roster will need to self-fund their way to the tournament which includes flight tickets, hotel bookings and, possibly, the transportation of their own equipment for the BYOC competition which they aim to do via an ambitious GoFundMe campaign. 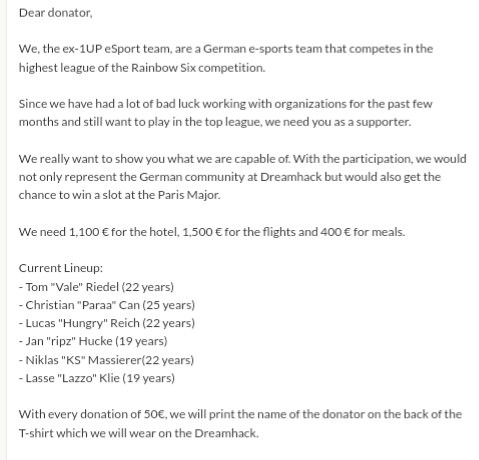 We spoke with PARAA from the roster to talk about this campaign:

Do you have a message for your fans who are considering supporting your cause?

We thank every supporter. Although money is currently our highest priority we are thankful for every kind of support, whether it’s cheering from home at the computer or supporting our trip with money.

What can we expect from you at DH Valencia?

Dreamhack Valencia is not just another tournament for us. As most people probably already know, there is a chance of winning a slot for the Paris Major at a certain placement. Of course we will do everything humanly possible to get this place.

And finally, do you think appearing at DH Valencia will improve you as a team?

Our previous experience with events has shown that a personal meeting of the players has always strengthened the chemistry in the team. Also, competing on stage and being supported by fans is always a huge motivation boost.

The fundraising campaign is currently at a total of €2,059/€3,000 in less than a day partly thanks to a huge €1,000 donation from a particularly generous fan. You can donate for yourself here to help one of the top teams in the world reach Spain’s first R6 DreamHack tournament.

Before this tournament, however, the team going under the temporary name of “Orgless” will begin their Pro League Season 8 campaign playing against last month's winners of DreamHack Austin, Millennium. Catch the match here on Thursday, 21st June, at 10PM CEST.