The final day of Rainbow 6 competition at DreamHack Austin was filled with incredibly close matches from start to finish. A perfect closing to a tournament where teams were brought to their limits at every stage. 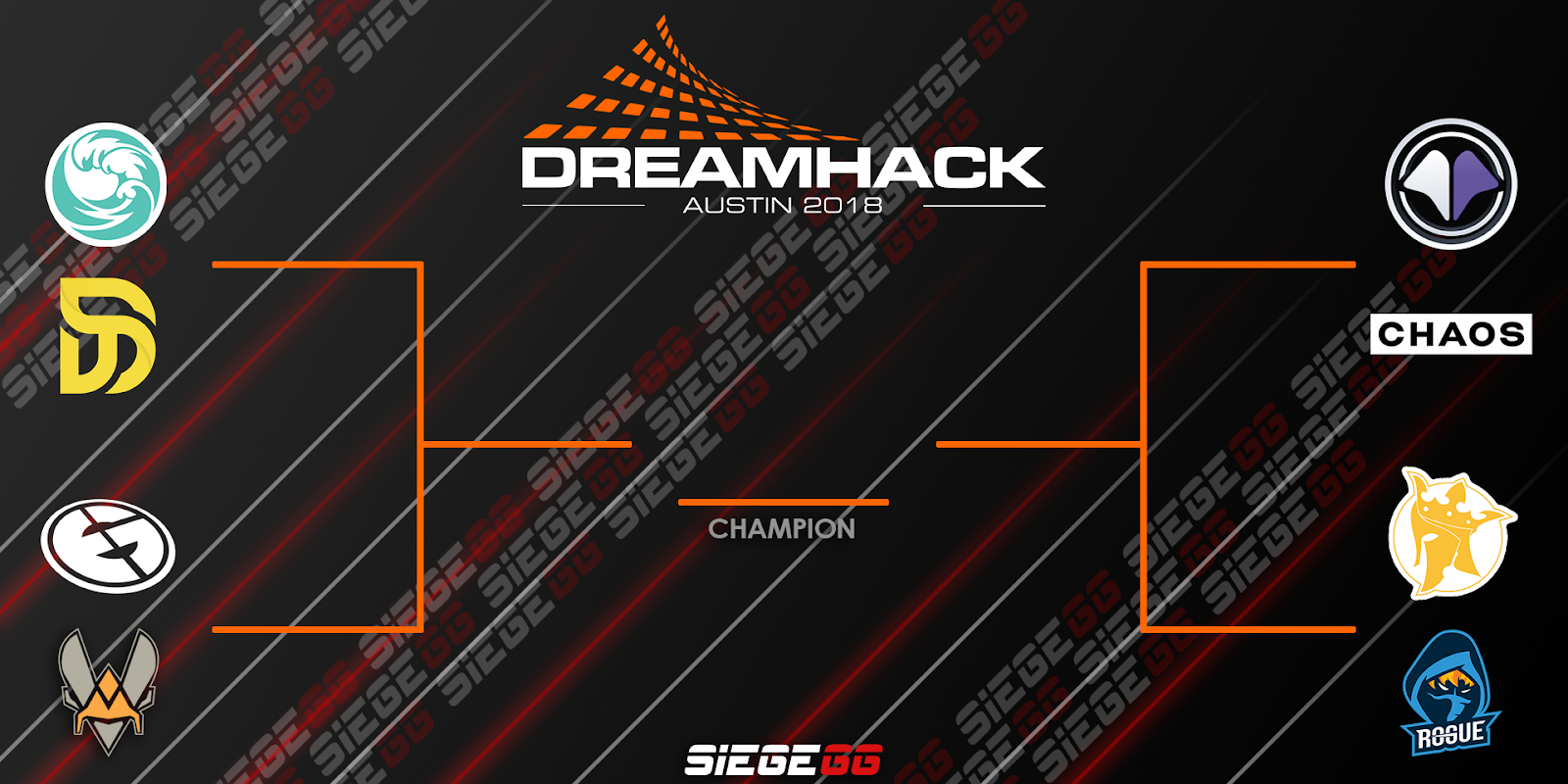 The first part of the bracket only had one match streamed, and it featured EG defeating Vitality 2-0. The first map was Kafe, where EG had everything pretty much under control for a quick 5-2 victory. However, Vitality would not go down without a fight. On another rare trip with EG to Chalet, we would go back and forth for a full 11 rounds where EG would finally find their footing to close out the map 6-5.

To close this side of the bracket, beastcoast would take on Disrupt in a 3 map battle. Disrupt started off with a 6-4 overtime victory on Border, but the Pro League side sent the series to the third map with a 5-3 win on Clubhouse. Disrupt then answered with a 5-3 of their own on Oregon to send Beastcoast home.

Jumping to the other side, Millenium and Chaos began with an overtime thriller where Millenium would take Clubhouse 6-5, and then swiftly move on with a 5-2 on Border. To finish out the Quarters, Noble would take on a Rogue squadron with their coach Ranger still subbed in for Geoo as their 5th player. Noble came out hot with a 5-2 win on Kafe, but Rogue wouldn’t let this get them down. Going on to Border, Rogue would build their momentum and take the win in overtime 6-4, and then continue to steamroll their counterparts 5-0 in the decider on Consulate. 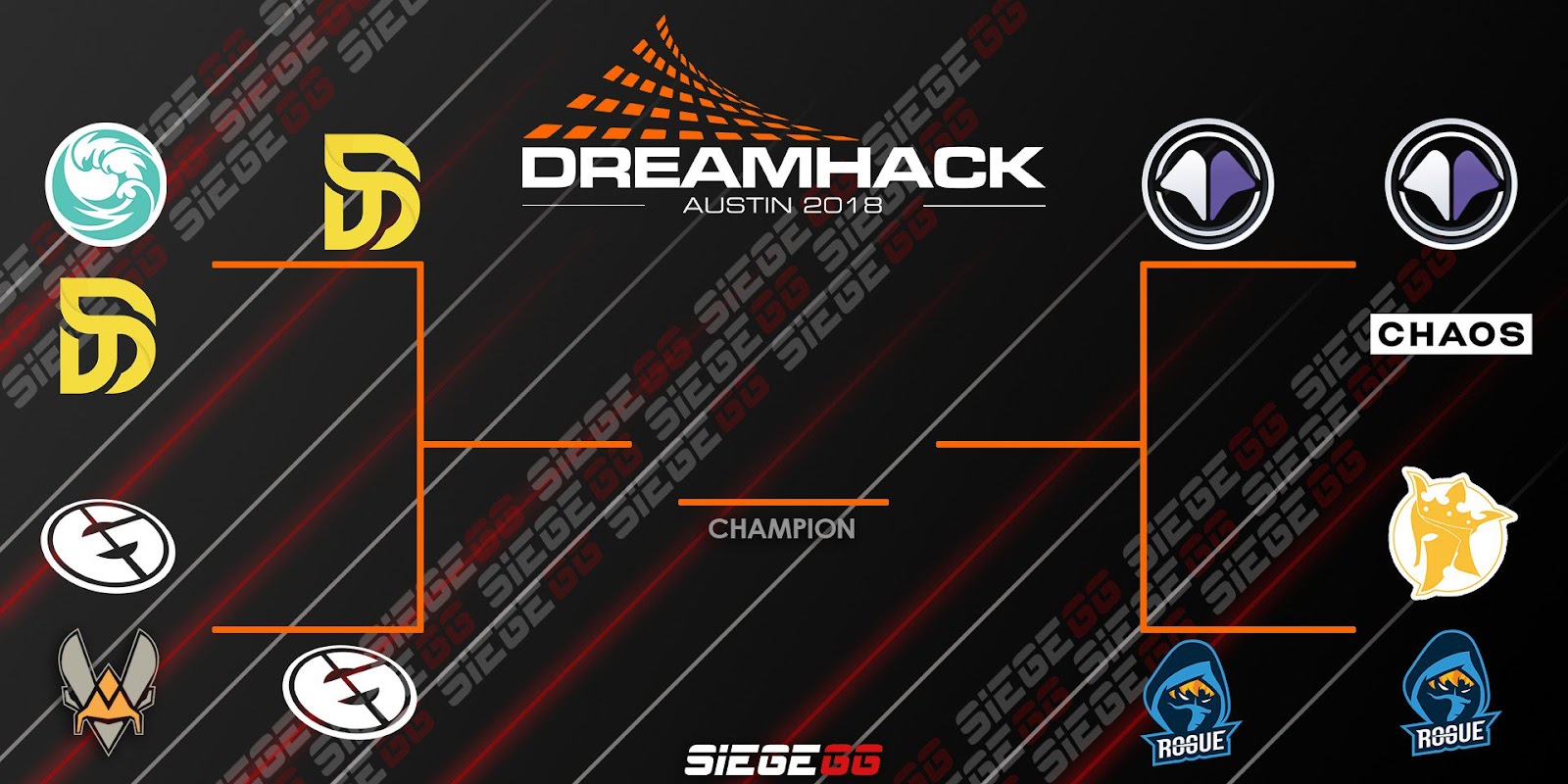 Kicking off our Semi-Final matchups was a rematch of one of our more surprising group stage results. After falling 2-0 in their first match of the tournament, EG was out for revenge and they certainly got it. Going to Oregon, nvK would start off with a big 1v3 clutch after EG had planted the defuser in the basement to set the tone for the match. This map was very much in EG’s favor, and even after an extended break for a rehost, they kept up their momentum. Canadian would then help them finish strong with a huge Pulse 3k mainly out of the upstairs armory, and EG would take the first map 5-1.

Moving on to Border, we saw more of the same dominance, with only a couple rounds going in favor in Disrupt after some EG mistakes.

In the second round we saw a 2v2 with Disrupt pushing into the main armory wall. However, Yung got a bit trigger happy and put a bullet into his own teammate’s head, which allowed Disrupt to then clean him up in quick succession. Despite that though, it was still the EG show. Although many rounds went to a more slayer heavy outcome as opposed to defuser plants and denials, EG were still in the driver’s seat.

Most would think that this might favor Disrupt with a fast playstyle, but EG’s experience and determination for revenge was too strong, giving them a decisive 5-2 win. Canadian looked especially confident on some comfort picks of his, and we would learn after this match that BC has picked up a lot of the IGL duties for the team. While Canadian said he will still make a few calls, he added that everyone has had greater input recently. With this result, it seems that BC at the helm looks like a promising idea.

To fill our second spot in the DreamHack grand final we would see a wild matchup between Millenium and Rogue. Border was their first map, and Millenium would start things off by defending the Customs office. Easilyy, however, would thwart their plans with a fantastic ace, but Millenium would then answer back with a couple of decisive rounds in their favor.

This map would see a few rounds go nearly to full time with no defuser planted, with a slew of highlight-worthy multikills from both sides. In round 6, Ecl9pse would get an incredibly fast 3k roaming through the security room upstairs. Slash would follow that up with a 3k of his own on Blackbeard in the next round. Trying to close out the map, Ecl9pse would get another 3 kills but get shut down by a Joghurtzz 3k clutch to force our first map to overtime. Millenium would not let that effort go to waste with a fantastic clutch comeback by Hicks in round 10 to give Millenium the victory 6-4.

Moving on to Consulate, Millenium’s map pick, Rogue’s chances were getting dim. Both teams could feel the pressure upon them as we saw much more methodical pushing from the two sides. After a rehost while the game was tied 3-3, Bryan tried to ‘get Ranger back into a coaching role’ by team killing him in the basement. Hicks would then come in clutch again on a clean 2k with less than 5 seconds remaining in the round.

Another rehost would then happen, and for our final round, Rogue’s chances would lay on the shoulders of Ecl9pse. Trying to defeat the lobby defense of Millenium, Ecl would pick up a few kills but only pick up the defuser in a 1v1 with less than 15 seconds left. Facing a Smoke, he had a crucial decision to make -- go for the plant or go for the kill. He chased the Smoke a bit through the bathroom, and out of the piano room, but with time running down and Smoke just out of reach around the corner, he was unsuccessful. Millenium took the map 5-3 and would be joining Evil Geniuses in our championship match.

During the grand finals, Rogue and Disrupt would play off-stream in the 3rd place decider match. Rogue would take a swift victory here, defeating their opponents 2-0 on Skyscraper and Border, 5-3 and 5-1 respectively.

For our final match of the tournament, Evil Geniuses and Millenium would give us an absolute spectacle that will not be forgotten anytime soon. We would see two full length overtime maps, and between the 3 maps would see 30 out of a possible 33 rounds played. This match also gave us our last look at the current design on Clubhouse, as well as giving Kafe Dostoyevsky a proper send off from the Pro League map pool.

Map 1 on Clubhouse may come as a surprise to some, as this was our only map of this series that did not go to overtime. With a history of teams trading back and forth across 2 viable bomb sites, you generally see this map go into deep rounds. While this map was still very close in nearly every round played, small advantages built up for EG. After winning some clutch defenses, they would take this first map 5-3.

Heading over to Kafe, EG would start strong with a 5v3 advantage in the first minute of the first round, with Canadian and Necrox picking up kills for themselves quite quickly. However Joghurtzz, not finished from his earlier heroics against Rogue, would pick up a huge 4k to turn the deficit into a victory for Millenium. Getting deeper into this map there was one unfortunate problem for EG -- nvK was getting picked off often, and that too early on in many rounds. EG did however hold strong, trading round wins back and forth, with Necrox having some great plays on Smoke.

In round 5, Yung managed to kill Risze while he was cooking a grenade that ended up as a kill onto his teammate and only hard breacher, Hibana. Yung would then continue his trademark plays on Montagne, being an incredible distraction and having some fantastic roam clear ability, while also finding some kills of his own. With EG then on match point 4 to 3, Risze would take the reins and grab multiple kills with people injured on both sides, and then destroy the defuser to force overtime. In round 10, Canadian would then put the map to a decider with a 4k round on Ash. With their tournament on the line, Millenium came up huge with a solid and coordinated push onto EG’s defense of the train room. Their 6-5 victory would bring us to Border to crown our DreamHack champion.

For our final map, nvK would once again start strong with another round one 3k. He would find his groove again in this map, not getting picked off as often as on Kafe and it really showed for his team. The following Millenium attacking rounds would then go very late, but somehow they would pull off a clutch victory. Two separate rounds saw Canadian and BC roaming and just waiting for a push from the attackers. Time would tick down as Millenium would try to formulate a plan of attack, and while they did end up hunting down Canadian for a last second victory, they were unsuccessful after they finally jumped onto BC.

In the last round of regulation, and facing a series loss at 3-4, Millenium would once again be stuck with under 15 seconds remaining. With a miraculous push through a soft wall in workshop, Millenium would find all 4 kills they needed and get themselves to overtime. Round 9 would see Necrox pick up another 2 clutch kills to put EG at championship point. Once again, with their backs against the wall, Millenium would have fate in their own hands. EG had a 4v2 advantage pushing onto the bombsite, but Risze would then peek into the Archives door to even up the round and bring us to round 11.

Here, after Millenium took their man advantage, they did not let it go. With a solid push and a clean sweep of Evil Geniuses, Millenium would take their victory, and lift the DreamHack trophy.

For France, it is a proud moment, and especially so for Joghurtzz and Renshiro. This DreamHack title marks the first title for a French team (and in fact, a non-PENTA European team) since Season 2, where the two aforementioned Millenium players -- then playing under Yunktis -- had beat Orbit to be crowned Pro League champions.

While a North American team will have to wait that much longer for another championship, Millenium showed that they are absolutely one of the top teams in the world. Their determination and coordination proved solid throughout the weekend, and they were able to come out on top when it really mattered. For all the other teams who participated, many new challengers have shown that they will be here to stay. The new Pro League additions have shown that they can hang with the best, and many of the BYOC teams let everyone know that they will most definitely be back. 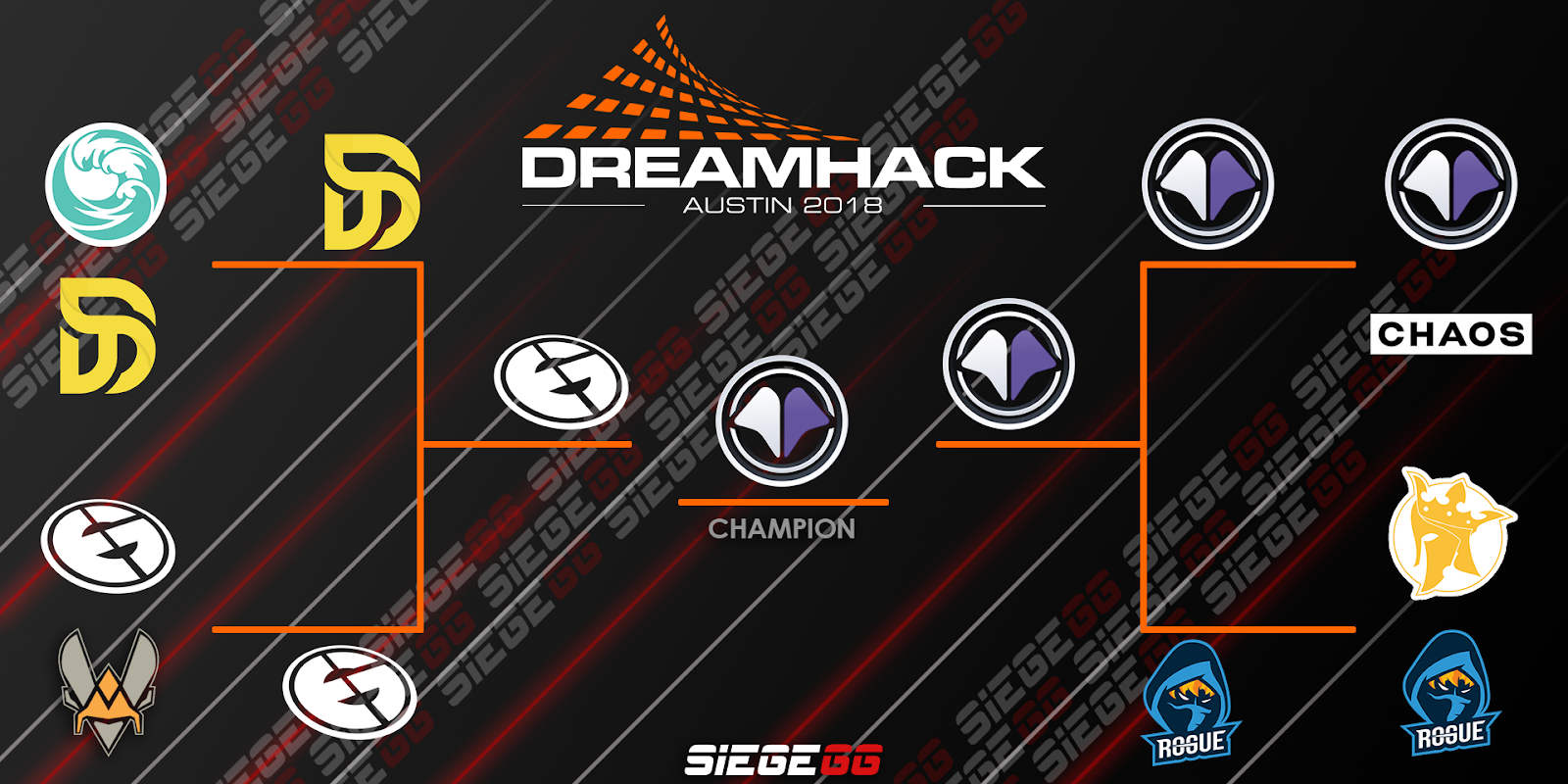