The team will be aiming to join Challenger League for Season 8.

The team consists of 3 ex-Challenger League players in Spades, Gotcha, and Remorce, as well as the 2 relatively unknown players of Oasis and Dazzle.

Spades and Gotcha had previously played in Season 7 of Challenger League with limited success. Spades had been on the Noble eSports roster for 2 games before leaving the team, while Gotcha was in the team “Orgless” who won Group B before losing to Noble eSports in the playoff semi-finals. Similarly, Remorce had most recently lost in the semifinals of Challenger League Season 6 while on Vertical Gaming, and had previously played in Pro League with Kingdom eSports in Season 1, VexX Gaming in Season 2, and MiLSPEC eSports in Season 3.

BitterSweet previously fielded a team in Season 5 of the Pro League, which now makes up the core of SpaceStation Gaming. The roster consisted of KingLio, Daave, ThinkingNade, Trippen and Mas who achieved joint 5th place in NA alongside Continuum (now known as Evil Geniuses).

The team is currently not participating in any tournaments but will be aiming to play in Challenger League Season 8. This will mean they would need to qualify through the Open Brackets starting next month. 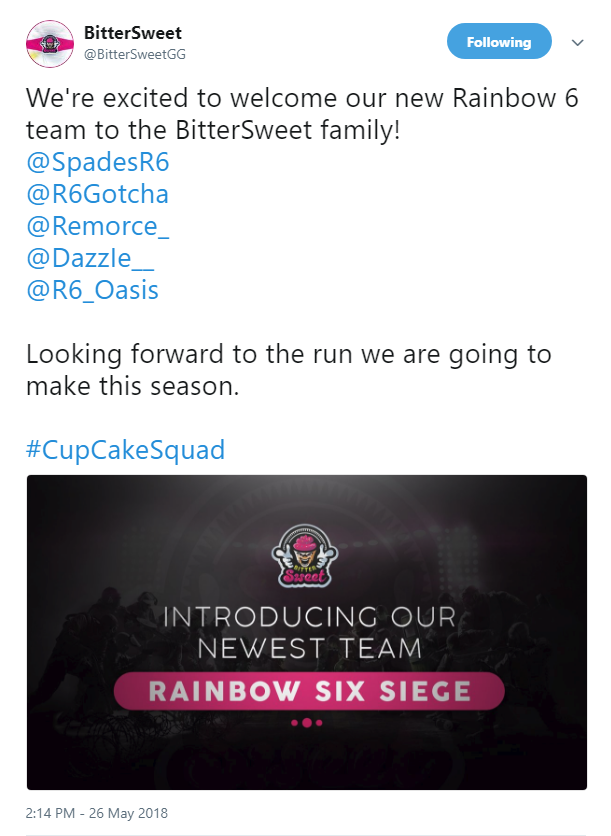