Krazy and Benji leaves the team as the NA shuffle begins

Krazy achieved modest success in previous seasons while in OnSlaught where he won S5 of NA Challenger League before joining the Pro League team of eRa Eternity’s roster. Benji meanwhile joined the roster at a similar time however was a substitute as he had much less high-level experience.

Krazy and Benji, along with the roster of MahMan, GurmyWurmy, Bosco and Snake_Nade, managed to qualify for the Year 2 Six Invitational by winning the Open Brackets however came last in their group after losing to ENCE and eiNs. The roster was then picked up by Obey Alliance one match into the new season who went on to finish joint 5th in NA Pro League Season 7 after beating Ronin Esports (now known as Motiv8 Gaming) but losing twice to Spacestation Gaming.

The team has now announced this roster change just 9 days before they are scheduled to play in DreamHack Austin, which they were invited to. This leaves them just a short amount of time to announce the two replacement players.

Krazy responded to the announcement saying “Was awesome experience being on Obey, the org and hope the team excels to their expectations. Farewell.” While Benji said “I’d like to thank Obey and the team for the opportunity this season. It was a great experience and I learned a lot.” 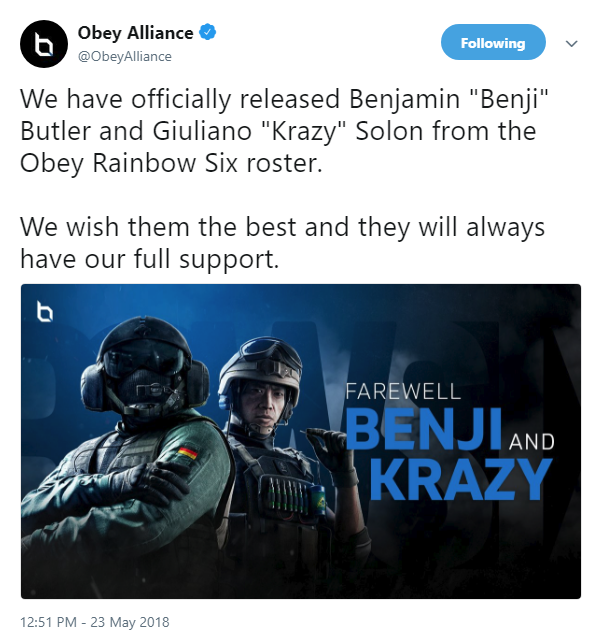