This was the first event with co-streaming: what do the numbers say?

Last week’s Six Invitational saw a return for Rainbow Six esports following a three-month down period. The annual World Championship is always by far the most-watched event in the esports calendar. So, following a dip in viewership through the 2021 Season, we took a look at how the event fared compared to prior tournaments.

How’d SI 2022 stack up against prior Six Invitationals?

According to escharts.com the 2022 Six Invitational peaked at 272,714 viewers while averaging 121,582 viewers through the 10-day tournament.

Concerning peak viewers, this is a notable drop with this being the first SI since 2017 to drop below 300,000 peak viewers. The average, however, fared better with this sitting in third below SI 2020 and 2021. 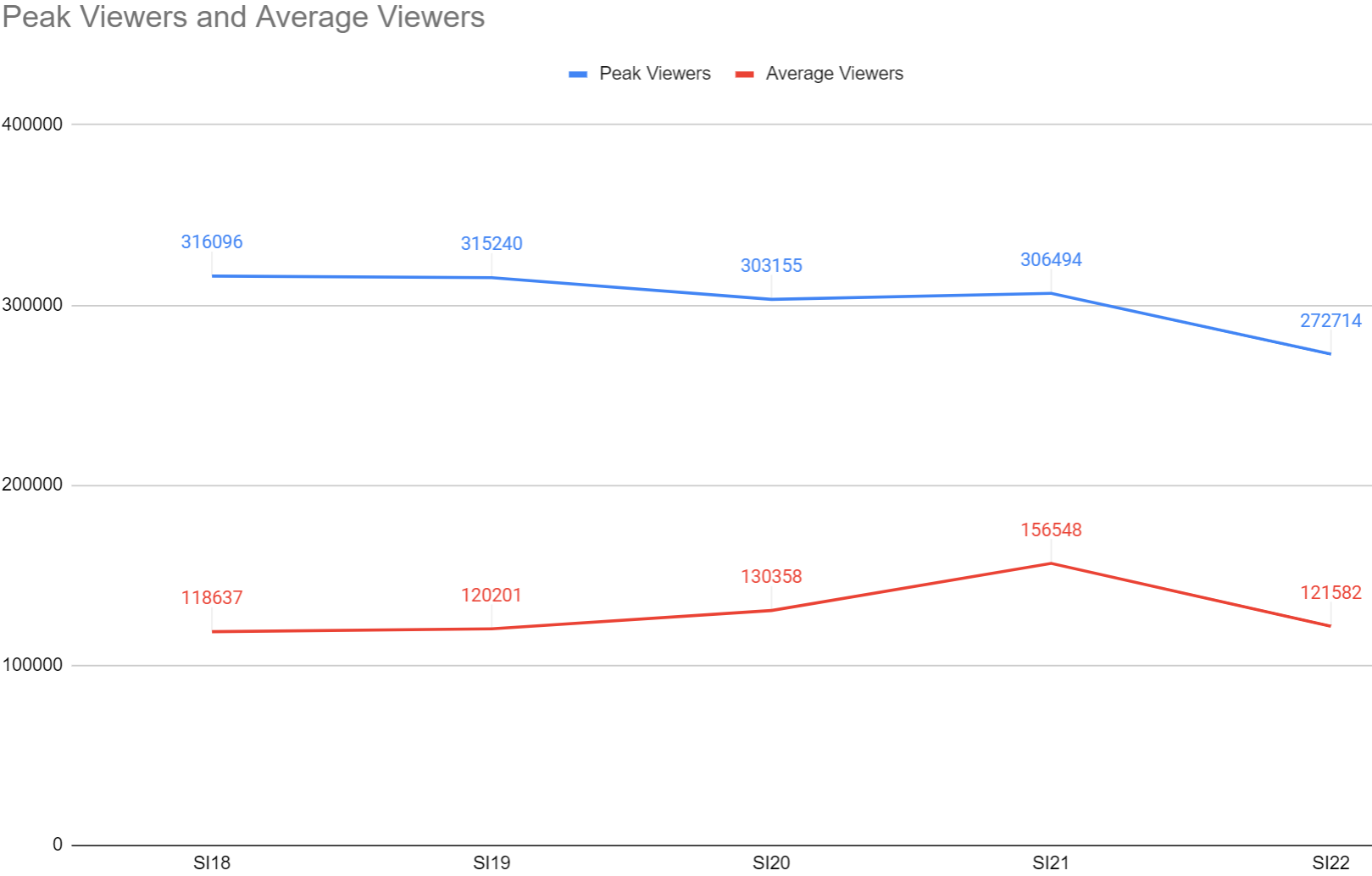 This is particularly notable, considering the recent Six Invitational was the first time since SI 2018 in which three regions were represented in the top-four with a mixed-region grand-final which theoretically should’ve boosted views. The fan-favorite players, Jason "Beaulo" Doty and Daniil "JoyStiCK" Gabov, playing in the final should also have drawn in more eyes.

Furthermore, SI 2022 also saw the introduction of watch parties and co-streamers who were not present at any prior tier-one event. SiegeGG confirmed with the CEO of escharts via email that co-streamers and watch parties are included in all their listed figures.

How does SI 2022 compare to other tournaments?

While SI 2022 failed to match SI 2021’s numbers, it being such a prestigious tournament means it did better than any Major or regional tournament to date.

Looking further back, however, the 273k peak viewers is just four thousand ahead of the Raleigh Major’s peak.

122k average viewers, meanwhile, are behind the Pro League Season 7 and 8 Finals averages and 1,000 ahead of Season 9’s figures. The two-day condensed schedules of the Pro League Finals does drastically aid in average figures though. 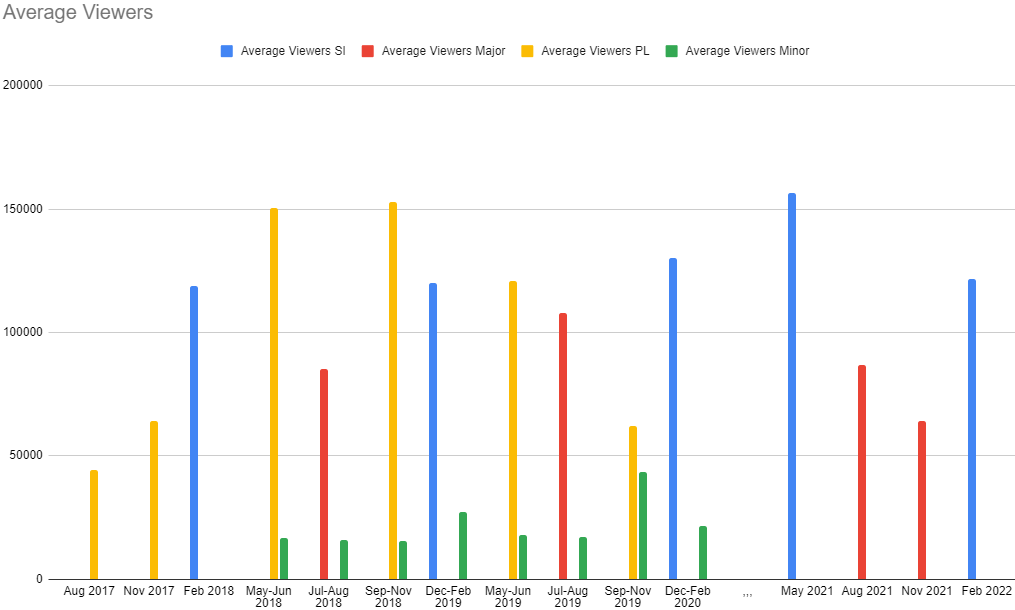 After around three years of requesting co-streams for major tournaments, SI 2022 was the very first event to officially support them with a slew of streamers hosting their own watch parties for the games.

While undeniably a great community engagement tool that should return, it’s hard to say how much it helped viewing figures. Should co-streams continue for the 2022 Season a year-on-year comparison should make this comparison a lot easier to make.

On one hand, if co-streams did boost viewing numbers as expected this leads to some somewhat worrying thoughts on how low the viewer counts would’ve hit otherwise. SI 2022 already underperformed in relation to SI 2021 even with watch parties boosting the numbers, without this help we may have had another record low showing.

On the other hand, the Six Invitational is unique in the R6 esports calendar in just how much it attracts more “casual” esports viewers. It’s possible that co-streaming then had a minimal impact as any R6 fans who would’ve tuned in for a significant amount of the 138 hours of SI 2022 would’ve tuned in regardless.

If this latter case holds any weight, this means co-streaming would probably have a much greater effect during Six Majors and regional tournaments such as the NA League which the “casual” esports watchers are less likely to watch otherwise.

What about other tournaments?

Looking away from the Six Invitational, 2021’s two Six Majors saw a remarkable dip with the Sweden Major reaching a peak of just 100,884 viewers – just above the DreamHack Montreal 2019 Minor. This is in stark contrast to the Paris or Raleigh Majors which performed just below the Six Invitational levels by peak viewers.

This is concerning. The performance of the upcoming May Major in the USA will be key to seeing whether this downslide can be stabilized. This Major will be in a more convenient time zone for most of the world, will likely have co-streamers and an in-person crowd, and, considering SI 2022’s results, will hopefully not end in a single-region grand-final.

While this drop sounds bad, this comes after a massive jump in viewers at the beginning of the 2021 Season. This was probably due to the excitement surrounding SI 2021, which was the first global event in a year. The viewership is now slowly falling back down to 2020 levels, however, we may see another big jump following SI 2022 with co-streams now in play. 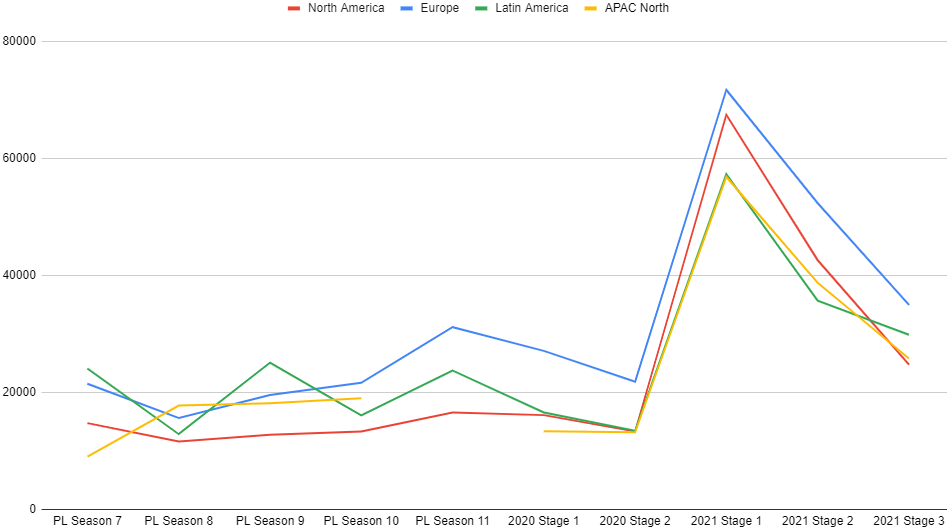 Due to the changing format LATAM refers to the BR6 during 2020 and 2021 while APAC North refers to the APAC Playoffs during the Pro League-era, and North America is just the US Division for the 2020 Season.

Finally, for national-tier tournaments the Japan Championship grand-final was the most watched game with it peaking at 33,866 viewers despite it taking place in the middle of the night for the Americas. This peak is higher than the APAC Playoffs during Stage 3.

The falling player numbers seen on R6’s Steam pages have been talked to death over the last year as many heralded it as a sign of the death of the game. While recent peak player counts don’t hold a candle to the game’s 2018 to 2020 highs, it’s worth noting that the all-time record for peak players was broken in March 2021 just a year ago.

Similarly, with 85,157 average players, last March also had the fifth-highest average in the game’s history behind just the January to April 2020 period. This March peak matches the massive rise in esports viewers at the beginning of the 2021 Season.

While average players have been around 43,000 over the last five months, we’ll likely see another peak this March as we’ve seen in prior years.

It’s also particularly noteworthy that Steam represents just a small fraction of the total player base. The game is available as part of the Xbox Games Pass subscription for the Xbox and Ubisoft+ subscription on Ubisoft Connect, which would likely boost player numbers on the other platforms.