Europe was back in the spotlight this weekend as the EUL semi-finals and the Challenger League Grand Final took place.

After almost two months since the ending of the European League regular phase, the action was back in Europe.

On Saturday, the competition’s top four teams would play the semi-finals of the European League. Meanwhile, on Sunday, both MnM Gaming and HellRaisers would fight to get on their hands a spot to compete in next season’s European top-flight.

The first match of the weekend was by far the most one-sided game of them all. With a 7-1 on Oregon and a 7-3 win on Coastline, the Russian powerhouse clinched the first spot to compete at the European League 2022 Grand Finals.

Every member in Team Empire scored positive ratings as the Russians were incredibly strong on defense, winning 10 out of a possible 12 rounds on that side. With Natus Vincere being incapable of coming up with something to break through their opponents, the UKIN side hope’s of winning the match eventually faded away. 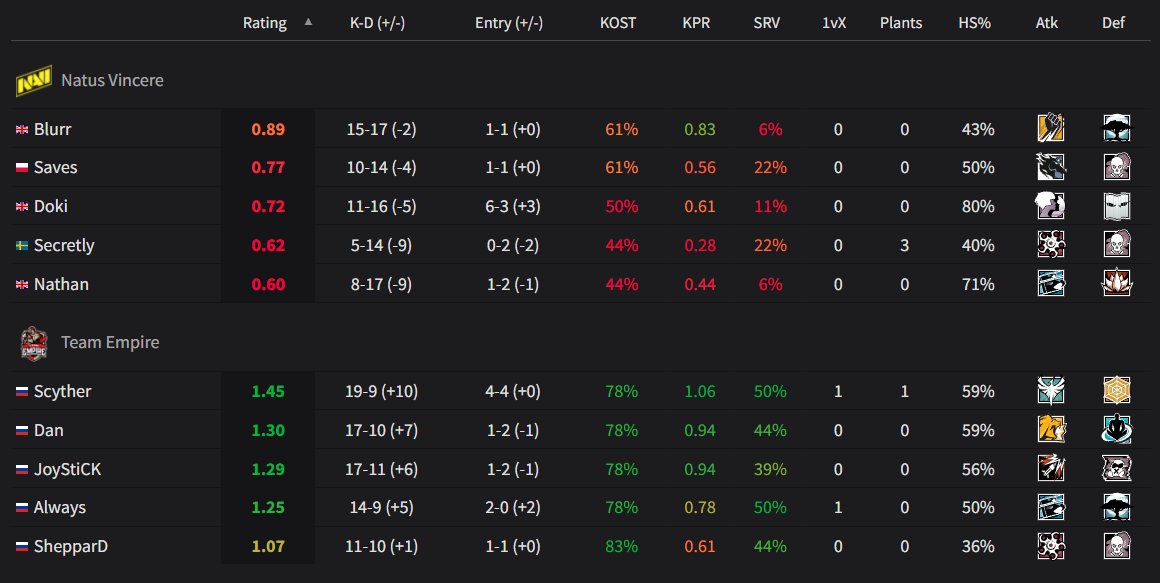 When two of the best Siege players, Ben “CTZN” McMillan and Stéphane “Shaiiko” Lebleu, face each other in the same server, big plays are always guaranteed. Not only that, but this game was a rematch of last year’s European League Grand Finals, which G2 Esports won. Plain and simple, this was a match that no one could miss.

With BDS Esport having shown great consistency throughout the year, and with G2 Esports minds’ being in both Europe and the SI 2022 open qualifiers, many saw this match as G2 Esports tilting at windmills.

However, no one expected such an incredible performance by CTZN, which arguably single-handedly carried the team throughout the series. The British gunner registered 23 kills in G2 Esports’ 7-5 victory on Oregon, adding 23 more to his name on Bank, which ended in a 7-8 loss for his side. With 46 kills in just two maps, he was four kills away from surpassing the record of the most kills in a BO3 series, which was 49.

Although he went to add nine more kills to that list, BDS’ performance on Club was too dominant for G2 Esports, who lost the third and final map by 7-3.

MnM Gaming would cheer up UKIN following the performance of a certain British driver by actually winning their own race. Here, the competitors weren’t fighting for a trophy, but for a promotion to the top-flight competition in Europe.

The series started off with two very tight results, as HellRaisers won their only map of the series by 8-7 on Coastline. MnM Gaming’s reaction was exactly what the team needed, as the UKIN side labeled the series with a huge win on Clubhouse by 8-6.

Map three brought both sides to Chalet, where round eight proved to be a turning point. With MnM Gaming being 4-3 ahead, a 3v1 situation quickly turned to a 1v1 following a double kill by the Russian Anatoliy “eXoduSS” Martynov just right after Luke “Tyrant” Casey completed the plant. There, Fatih “Solotov” Türker quick reactions helped MnM Gaming to win a fifth round, which eventually was pivotal in the team’s victory there (7-3).

With the fourth map being on Villa, MnM Gaming had a spectacular start to the map by winning five of their six defenses. However, that four-round difference was quickly reduced to none, as HellRaisers leveled things up. Now, the Russians were the favorites to take the Italian map and force a fifth.

But that would not happen, as the team lost a defense in Dining Room/Kitchen. Following that round, the team took the arguably questionable decision of going back there for round twelve, in an attempt to surprise their opponents.

Nevertheless, MnM Gaming hit them back with a very strong attack, which eventually left Aleksandr “Rush” Rusiyev in a 1v3 post-plant situation. The player could do nothing, which meant that MnM Gaming had won the Challenger League Grand Final.

Such an impeccable season by MnM Gaming deserved a promotion, the club’s second in Siege’s history. This is also a welcome back for Leon “neLo” Pesic, as the Croatian is back to the top-flight after leaving Natus Vincere in August 2020.

We will also finally see the upcoming talents in the UKIN region, as Tyrant, Josh “Yuzus” Pritchard, and Callum “Neonical” Humphreys will be making their top-flight debuts. The Turkish player Solotov completes the list.