All skill, no frill: Humility is Beaulo's key to success in all aspects of Rainbow Six Siege

The 1990s and aughts era Miami Hurricanes had it. The Bad Boy era Detroit Pistons had it. Deion Sanders definitely had it. Zlatan has it in spades. All of these traditional sports athletes competed in their respective games with an attitude, an edge, a flair.

In some ways, you could argue that each team or player changed the way their sport was played, and they were notorious for letting you know how much better they were than you.

The Hurricanes talked so much trash that there was an NCAA taunting rule unofficially named after them. The Bad Boy Pistons era included the now-infamous “Jordan Rules.” They gave no deference to the three kings of that era of the NBA: Magic, Bird, and Jordan. Sanders’ trash talk is nothing short of legend, “Prime Time” was one of the all time greats from the time he was a teen. Zlatan refers to himself in the third person.

It’s a pretty simple contention: When you’re the best, you get to tell everyone that you’re the best, if that's what you want. There will be people that don’t like this, but by and large they’re the ones who lag behind. I’ve never heard a winner say, “Hey, maybe we’re a bit too confident here.”

The exceptional levels of bravado are reserved for the trailblazers, the pioneers who fundamentally change their sport, or at least push the sport towards a different direction. These exceptional, extraordinary people dot across all sports and esports that scale to a certain level.

Rainbow Six Siege is different: its trailblazer succeeds with humility, despite history, despite the YouTube algorithm, despite every reason to do things ostensibly for attention.

Beaulo: The face of a region, in more ways than one

Jason “Beaulo” Doty has every reason to carry himself with the swagger of Zlatan, Magic, or Jordan. The “Beaulo Lean” concept is widely documented and discussed, and its burgeoning popularity from 2018 to 2019 was in many ways the first signifier that Siege was moving into a new era.

“At first, I didn't really kind of think about how I very well could have changed the game and how people are playing it,” Beaulo said in an interview with SiegeGG. “I think, as time went on... As I'm 19 or 20 years old, I see these 15 year olds and I'm like ‘Wow, like, was I doing that? That was me four years ago?’”

Beaulo sits at a unique place in esports. He’s a playstyle pioneer, sure, but that isn’t the whole story. He’s also one of the Siege’s biggest content creators, and sits at an absurd level of popularity compared to other hybrid professional players/content creators.

Beaulo’s name is in the leaked Twitch earnings — he made $671,094.57 over August 2019 through October 2021 from subscriptions, bits, and ad revenue alone (a figure he says is boosted by Ubisoft’s charm program). This doesn’t count donations, sponsored content (he’s been an official CoD Partner in the past), or YouTube, where he boasts a 1.27 million subscriber channel.

Michael “shroud” Grzesiek’s run as the “King of Reddit” during his tenure with Cloud9’s CS team is similar — but Beaulo plays for a favorite, not an underdog. He’s also made his name despite his sometimes muted, measured demeanor, not because of it.

The YouTube algorithm doesn’t favor those with realistic titles or thumbnails. The Twitch viewership, which largely scales in the “teenage” direction, doesn’t rate normal reactions highly — it values overreaction. Beaulo does neither, in both official competitions and on stream. He is aggressively normal; nothing about his reactions is enhanced, nothing about his personality is faked or ginned up for the camera.

He is Jason, no one else, when the camera is off or when it’s on.

“I just think he's a normal person,”  said Parker “INTERRO” Mackay. “You know, the thing about Beaulo is that he is remarkably gifted on the server, more so than probably most people we’ll ever see play this game. But outside of the server, he's just a regular guy. He does his work. He doesn't really step into drama.”

“He's funny, he's affable, he's kind. I don't know if it's something he learned; to be humble, and just kind of, you know, put his head down and do his work or if it's just part of genetics, biological, I have no idea.”

All the same, Beaulo’s popularity is that of a minor modern rock star. He isn’t going to get mobbed on the street or have paparazzi in his windows, he says, but he’s amassed a dedicated fanbase and success with TSM FTX.

Beaulo and TSM FTX never missed top six at an event from the Raleigh Major to the Mexico Major, where they bombed out in groups after Bryan “Merc” Wrzek’s positive COVID-19 diagnosis.

There’s a ton of reasons for Beaulo to be arrogant, to be full of himself, to talk a little smack. Competitively, he’s one of NA Siege’s most successful players. In the content realm, he might be one of three of Siege’s most visible content creators. It isn’t a stretch to say he’s at least the face of NA Siege right now, and one of maybe three other players that can say they’re the face of the esport on a global scale.

For all Beaulo’s raw skill, his most important competitive advantage is his humility.

The most expensive, “flashy” thing Beaulo has purchased is a pair of Yeezys, he says. He’s worn them twice. Compared to other streamers, he might as well be a member of the Queen’s Guard: when he hits an absurd shot, there’s no faked, ambitious reaction.

He doesn’t get flustered, he’s rarely upset. He’s calm, cool, collected — not exactly what most envision when thinking about a North American player with a play style that flashy, that prone to moments that leave Siege fans’ jaws on the floor.

Beaulo is genuine, earnest, calm, and tends to downplay his accomplishments, or give a chunk of the credit elsewhere — streaming success with Ubisoft’s charm program, in the competitive scene with his long-time TSM FTX teammates. He steers clear of trash talk, an NA player staple, partially because of how he’s grown as a content creator.

“It kind of goes back to when I used to make my montages, way early into Siege’s lifespan. I would throw up like a content creator’s POV of me smoking 'em, you know, whatever it may be, but then I stopped doing it. ... I don't want to talk shit and, you know, indirectly, have my fans talk shit on them,” Beaulo said.

“...I knew what it was like to have my name kind of tarnished and dragged through the dirt on somebody's stream that had way more viewers than I did.”

TSM FTX’s game viewership carries North America. Streams blow up with anywhere from five to ten thousand more viewers than normal games. On YouTube, the discrepancy is more stark. Other teams get anywhere from five to seven thousand views on their VoDs from NAL stage games, from a rough estimate. A TSM FTX game with under 20,000 YouTube clicks is an aberration.

Part of that is due to Beaulo’s individual popularity and some of that is TSM FTX’s popularity as an overall team. However, a look at the numbers for a league with so many massive organizations reveal another issue: a struggle for viewership.

Beaulo tends to stay out of the negative cycle of the loosely defined “Siege community” on Twitter, but there are some things he agrees with the naysayers on. Before the Sweden Major, he said that Siege was “in a tough spot” right now, but even two and a half years into his career, he’s committed to being a professional player.

As a sign of the times, one of the greatest Siege esports bits, the “when is Beaulo playing” website, has languished, and no longer displays TSM FTX’s next match.

The element that keeps Beaulo grounded is his unmatched humility, a uniquely abundant attribute that keeps him free from over -- or underreaction. The even keel helps in the server and out of it, even in the face of a seemingly endless pandemic that effectively has a knife to the throat of Rainbow Six Siege’s future.

“So if you're humble and you keep your head down and you put in the work, unless you are exceptionally talented, and we're talking one of the best people in your esport, period: You're going to get out hustled by people who are louder, who are more showy, who are better at branding and advertising themselves.” 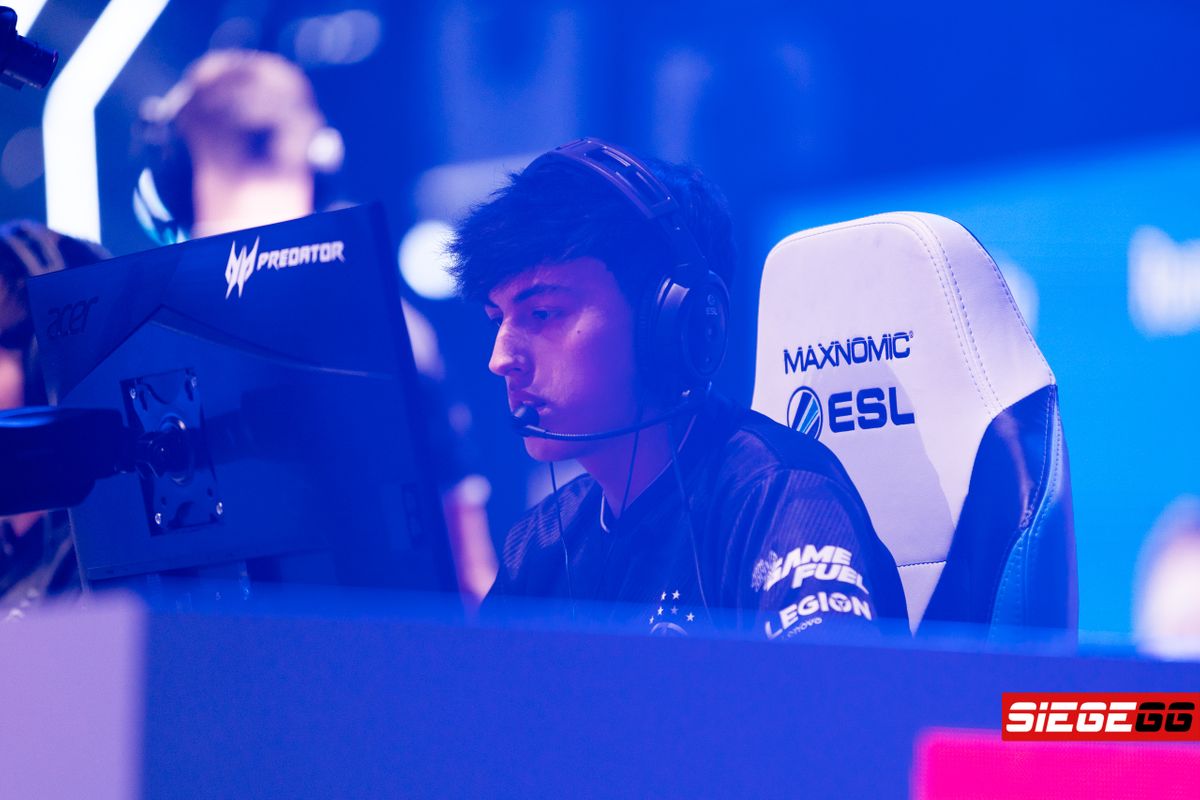 Humility isn’t something that can be quantified, it’s fundamentally intangible. You can’t grasp it, you can’t smell it, it’s the product of experiences gained over many years. More pertinently, it’s hard to describe on paper unless it’s experienced, or relayed to you.

Writing a story about an intangible is difficult, because you never know whether you’re the one being hustled for branding purposes, unless said intangible is directly experienced.

I’ve had a shot at asking questions to during press conferences or outright solo interviewing many people throughout the years — Patrick Mahomes, Kliff Kingsbury, Myles Garrett, and Johnny Manziel in another life covering traditional sports. Wei Yue for the Washington Post, dozens of high-level esports players and executives, people that work on the management side of massive organizations.

I’ve held NFL, Big 12, SI (remote) credentials. Through it all, I try to end every interview or press conference experience the same way, with the phrase “thank you for your time.”  I am the one who needs their experiences and words to elevate my work, not the other way around.

Beaulo’s one of two people out of hundreds that’s beaten me to the punch with that phrase, thanking me for my time before the words could exit my throat.