The NACL tournament came to its close last weekend for the 2021 Season.

One of the biggest tournaments in the 2021 North American season came to a close last weekend with Parabellum winning the region’s Challenger League tournament.

Check out our full rundown of the season below:

Starting with group A, this included by far the strongest lineup of teams with three out of six members finishing Stage 3 in the top three positions.

Leading the group with the only flawless record was 1shotLFO with 13 points. The two points the team dropped were due to two overtime wins against Parabellum and Ōkami with this result making up a third of Ōkami’s total points this Stage.

Just below 1shot was a three-way tie between Arial, Parabellum, and Aqualix. The first two teams had a 2-0-2-1 record while Aqualix sat at 2-1-0-2. This tiebreaker was broken when Aqualix won two points against Arial Arise. Parabellum got three against Aqualix and Arial got four across their overtime loss and win against Parabellum. This resulted in Aqualix just missing out on playoff qualification with a fourth-place group stage finish.

Group B was led by the Wichita Wolves who had bounced back from a weak Stage 2 after previously winning the Challenger League during Stage 1. The team lost a single game against sixth-placed Outlast the Opposition and dropped one point against Nokturns.

This meant 1shotLFO and the Wichita Wolves qualified straight to the upper-bracket semi-finals while Arial Arise, Investigation File, Parabellum Esports, and Nokturns had to play in an initial upper-bracket quarter-final to meet them there. 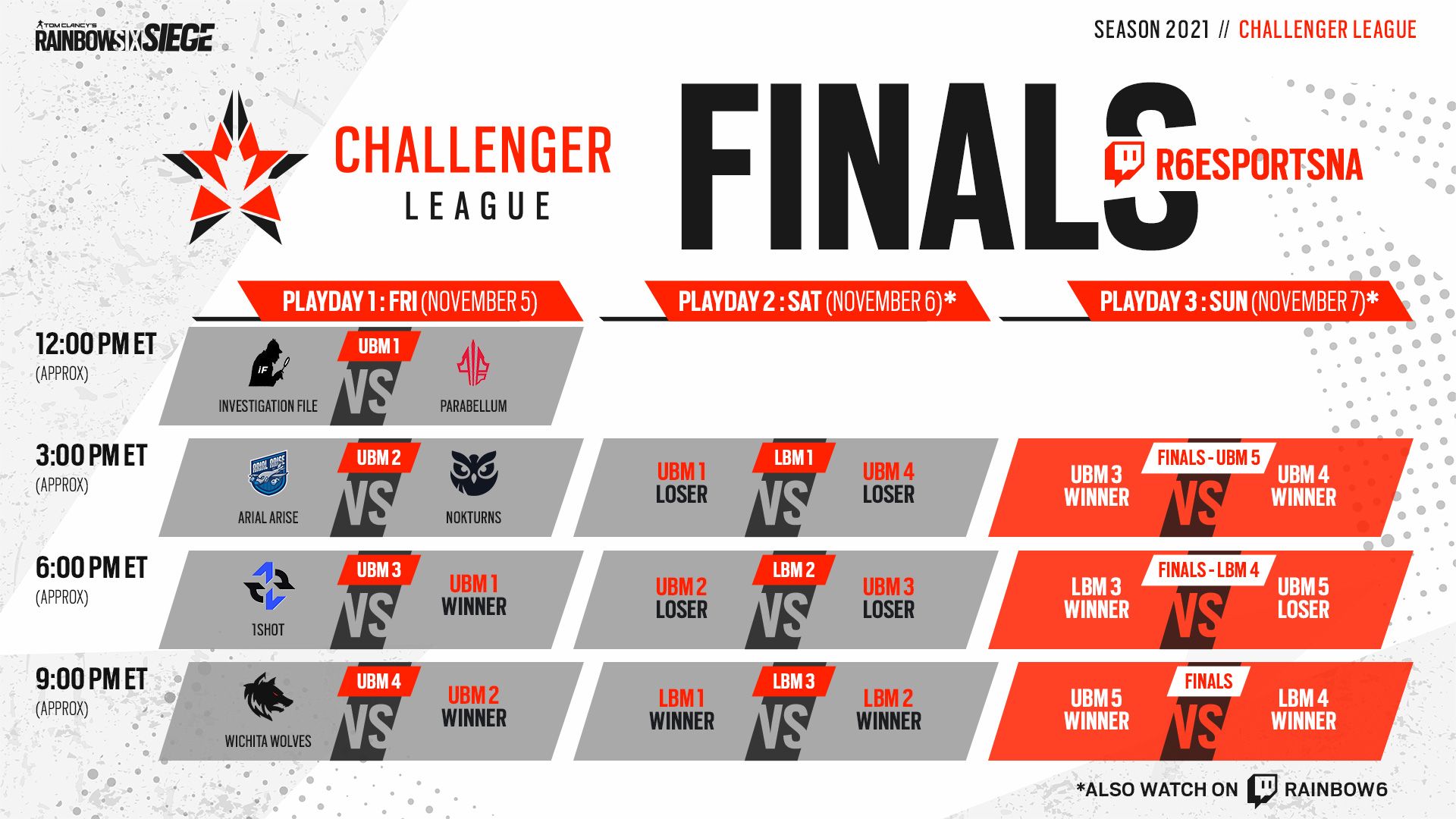 The playoffs then took place from November 5-7th in which time we saw 10 best-of-three matches.

The opening game of the playoffs saw somewhat of an upset as the reigning Challenger League champions of Parabellum lost their opening game against Investigation File in a 2-1 scoreline. This included a 6-8 map three result in which iF managed to take the final round flawlessly.

iF were taken down 2-1 in the semi-final against the group A victors, 1shot, which saw Kilo excel with a 30-21 kill-death spread on Hibana and Castle. 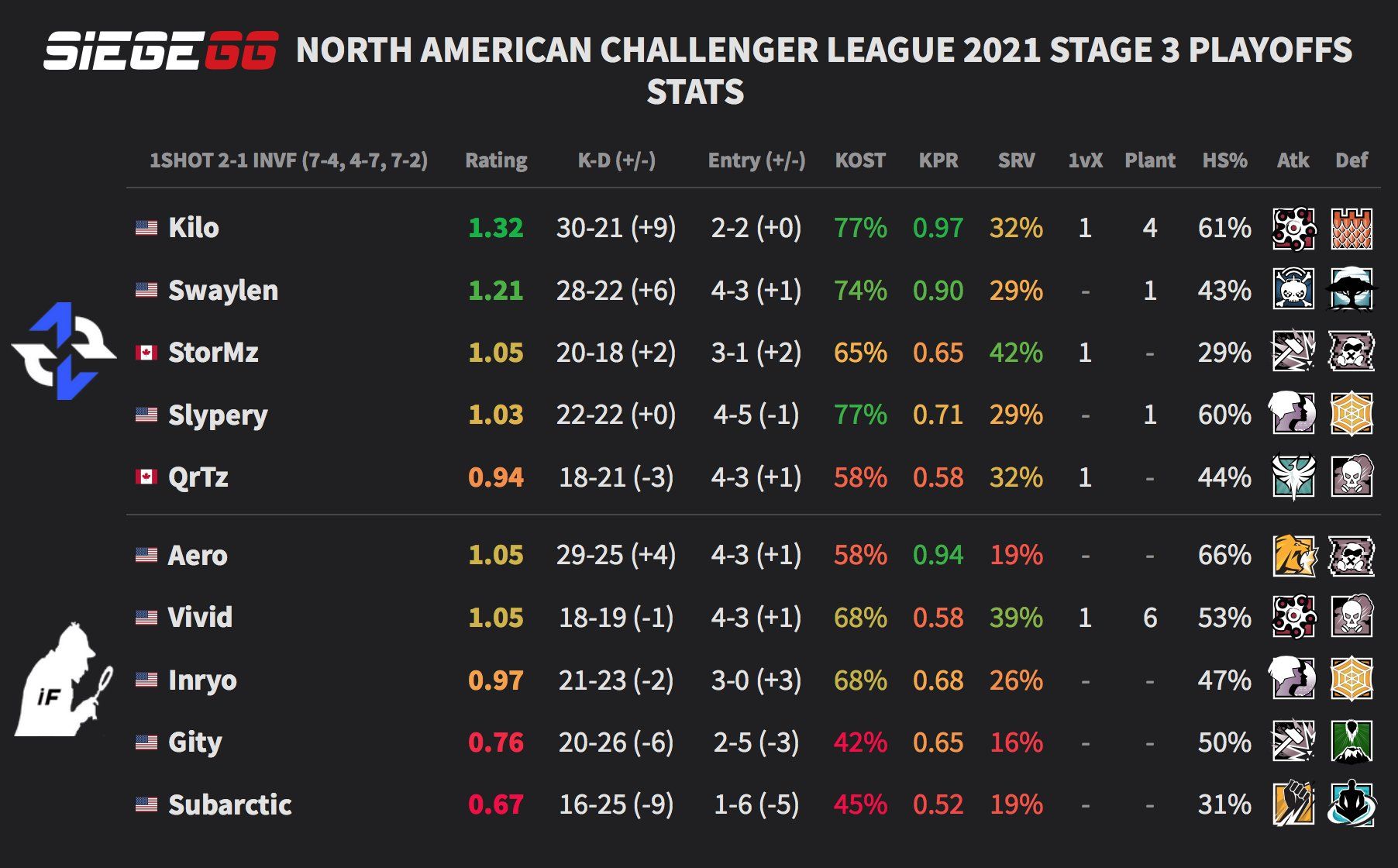 Before we got to this game, however, Saturday saw the lower bracket action play out. In another group B rematch, Investigation File once again managed to take down Nokturns in a 7-4, 7-2 scoreline while Parabellum then sent the Wichita Wolves home in a very strong 7-2, 7-4 scoreline, ultimately ending their NAL hopes.

This was a very disappointing performance from the Wolves considering their strong performances in prior stages and entrance into these playoffs as the joint top seed. While their initial 6-8, 6-8 result was particularly unlucky, they were outclassed in their second game.

The team that took them down in Parabellum then defeated iF in a just as dominant 7-5, 7-4 scoreline to get their own back after iF put PBLM in the lower bracket during game one. 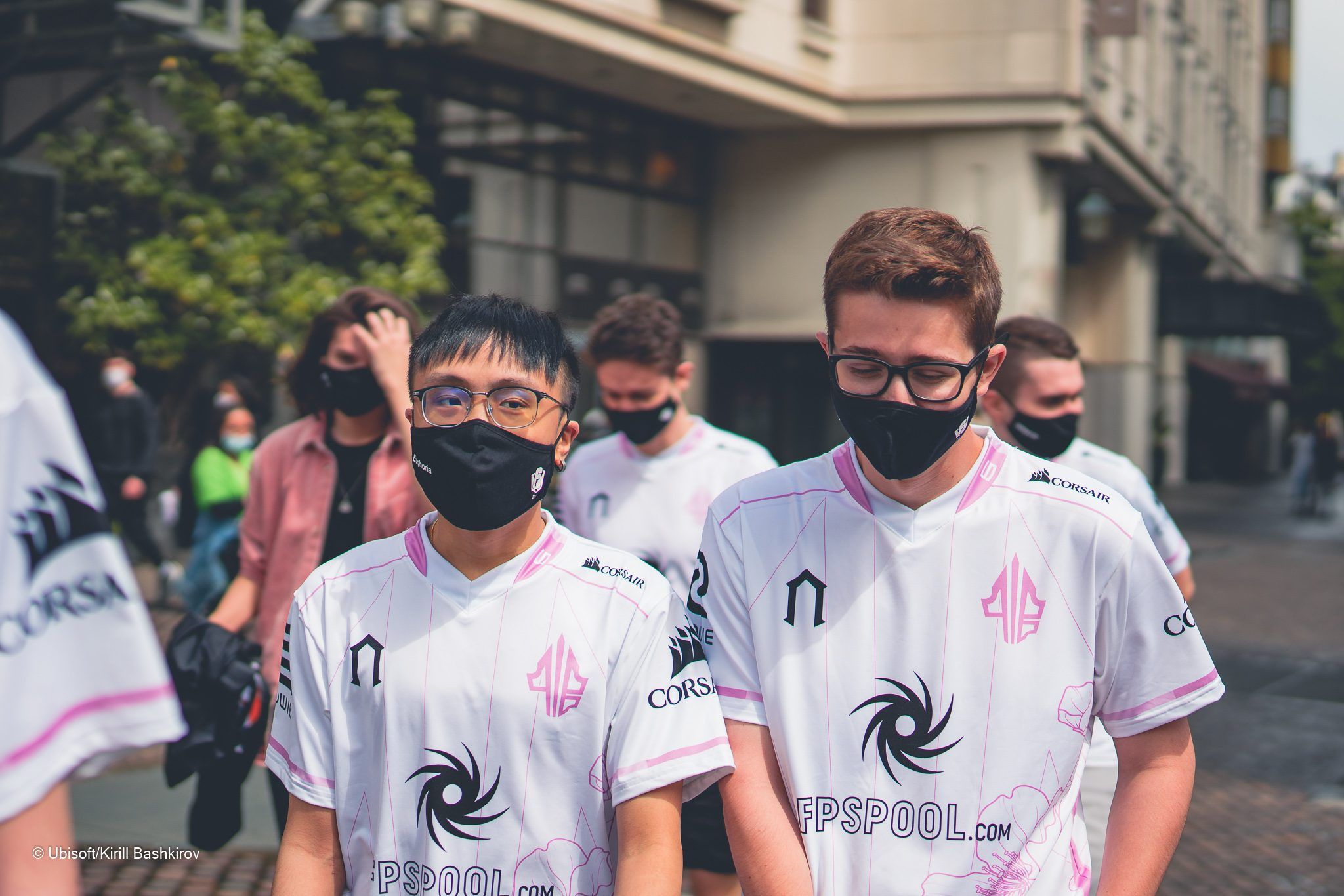 And so the final three were determined as 1shotLFO, Arial Arise, and Parabellum, all three of which had previously met during the group stage.

The playoff format meant that the loser of the upper-bracket final had to play three back-to-back best-of-three matches if they wished to win the whole tournament making this a must-win for 1shot and AA. Parabellum was looking to complete the lower bracket run, which was made easier considering there is no map advantage given to the upper-bracket team.

After breezing through Wichita Wolves on day one, Arial Arise then made the winners' final match against 1shot look even easier, taking them down in a 7-2, 7-4 scoreline. The team’s two Brazilian players, DiasLucas and GMZ, both excelled.

In the following game, 1shot made the somewhat questionable decision to go to the same maps — Coastline and Villa — where they managed to net just one extra round to go down 4-7, 3-7.

This set up an AA vs pB rematch in the grand-final after these two teams had tied in group A on eight points earlier in the tournament. While this game was one of the closest of the NACL season, Parabellum’s two map wins were pretty clear 7-4 results to take the series and complete the full lower-bracket run. 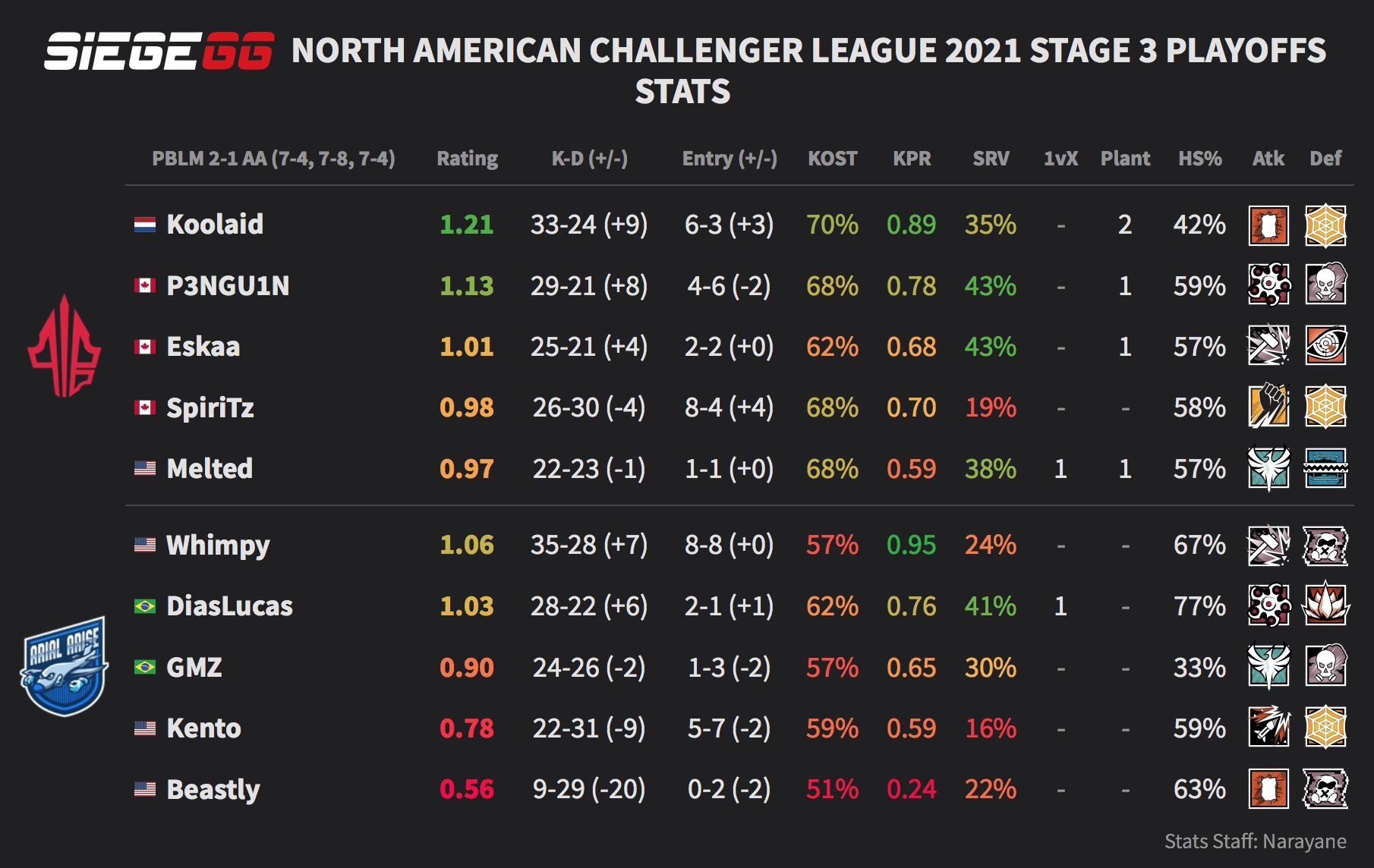 Who is on Parabellum?

This result meant that the reigning Canadian champions, SI attendees, and Challenger League victors had done it again, winning Stage 3 despite a weak group stage and early loss in the playoffs.

Coming into the Challenger League this year as the best-known team by far, Parabellum showed exactly why they managed to not only qualify for SI 2021 but also knock out G2 Esports, winning Stage 2. Now with a win during Stage 3 as well, the team has truly proven they deserve the chance to fight for a NAL spot.

The Canadian core of this roster has been playing together since September 2020. The squad took down Mirage to win the 2020 Canadian Division title before then besting both Disrupt Gaming and the "suprsoniqs" during the North American open qualifier to reach the 2021 Six Invitational.

Here, these three players beat Invictus Gaming, Ninjas in Pyjamas, and Spacestation Gaming in best-of-ones as well as G2 Esports in a best-of-three to go out in a joint-ninth place with $75,000 in winnings.

After returning to North America, KoolAid then joined the team for their Challenger League campaign one day after his 18th birthday. KoolAid had previously won the CCS League on Arial Arise but hadn’t had the opportunity to play in the Challenger League. Stage 1 saw these four exit in joint-seventh place before they then won the league during Stage 2.

Finally, September saw Melted join the team. He had spent the prior year on the APE roster having won Stage 1’s Challenger League with them making him a solid pickup.

This means Parabellum will play XSET in a best-of-five map relegation game in December with the victor taking the NA League spot for the 2022 Season.

With the NA League currently at nine teams, it is currently unknown what will happen with the 10th spot currently left vacant due to the exit of Altiora last February. Ubisoft will most likely want to get back to 10 teams since this gives the relegation losers and top Challenger League teams another shot at making it into the league for 2022.

Nevertheless, for all these other tier-two rosters, attention will now shift to the Six Invitational qualifiers which will likely take place over the next few months. After the Parabellum roster shocked North America to clinch the SI21 spot, enthusiasm for this tournament will likely be through the roof as they all hope to reach Siege’s biggest stage.

Check back for coverage of these tournaments here at SiegeGG over the coming months.