In case you missed it -- The mid-year Major will take place in the Paris Expo in Porte de Versailles, Paris.

The Paris Major will be the 3rd Major in Siege history, happening from August 13th to 19th in the French capital with the best teams from around the world participating at Hall 4 of the Paris Expo. The Paris Expo is the largest exhibition hall in France and has a long history of gaming events, having hosted 350 000 people at Paris Games Week for the past 7 years. 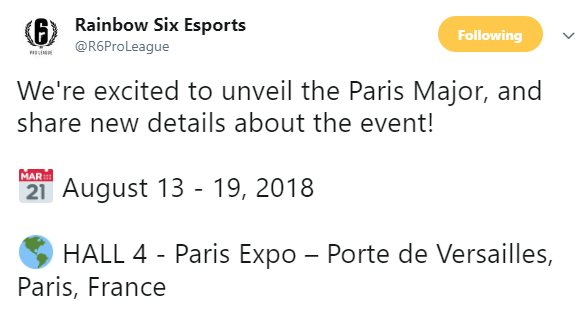 As seen at the Y2 Invitational the Major’s format will consist of a “closed to the public” group stage for the 16 teams which will take from Tuesday the 13th to Thursday the 15th of August followed by the quarters, semis and finals taking place on the weekend of 17th-19th of August which has an open audience. More information about the competition and the qualification format will be unveiled during the Pro League Season 7 Finals on May 20th.