The final week of the regional portion of Stage 3 took place last week, as the final teams locked in their spot to the Six Sweden Major.

Following most of these games were interviews with the victorious teams, so for those that missed them, we've summarised the best quotes and responses from those teams which qualified for Sweden below.

The final playday set in motion what could have been a close five-way fight for the final three European spots at the upcoming Six Major. Unfortunately for many viewers, an early win by Heroic over Cowana ended this race early. Empire, Vitality and Rogue clinched these spots before they even played their games.

Nevertheless, Empire still won their game against NAVI, 7-4, to take the second seed into the Major, with Danil "JoyStiCK" Gabov saying this after the game:

I think we don’t have a bootcamp for this tournament as we don’t have much time to do it. I think we just chill right now for like one week, maybe a little bit less, then we prepare for the Major. Of course, we want to win this Major, I think every team wants to do it. To all our fans that support us thanks for all the messages again, of course, we love you.

I don’t know [if Europe will win this Major], Brazil is really strong right now but sometimes you see Roni-nerfs and they tried to nerf this run-and-gun play style, they nerf some really good guns and maybe it somehow affects the Brazilian teams. But Brazilian teams are so strong on LANs because they are very very good.

The final game of the day was a somewhat meaningless game between the two already qualified teams, Vitality and Rogue, which Vitality took 7-4 to clinch the third seed spot.

This is the first time Vitality will play in an international tournament in over three years, leading to some very excitable scenes from the rest of the team behind Valentin "risze" Liradelfo, who did the post-game interview.

We’ve been working really hard the entire year with this new project to eventually qualify for a Major so taking the pressure off a bit is priceless obviously.

Personally, I really felt it about 10 minutes later after we knew we were qualified as I was really glad to bring Vitality this Major qualification along with my teammates obviously. It’s been a long time since Vitality had a representation at a major tournament so we are happy about that.

Of course, with Rogue losing this game against Vitality, we didn’t get a post-game interview with the German squad after a rollercoaster of a year.

Moving onto North America, despite losing on play day eight, Oxygen still qualifed that day, as TSM only managed to win two, and not three, points off of XSET. A 7-5 win over the Soniqs on play day nine then locked in a second-seed finish behind just SSG. Davide "FoxA" Bucci came on the post-game interview to talk about the team and their future.

Picking up these two new players and coming into this IGL role, it’s been completely different to what the team and I are used to and it’s been a tremendous improvement, especially since Stage 2.

We are definitely excited about the Major. I think the issue with the Six Invitational was, honestly as a new team we had no international experience and we were doing really well, but against certain teams like MIBR, we were just falling short and now we’ve had a little more time, and as a team together we’ve been able to play a little more against international competition.

Finally, as with all the post-game interviews in the NA League last week, FoxA was then asked to share a story or memory of his time with Michael "KiXSTAr" Stockley following his tragic passing the week prior:

Despite losing their matchup against Oxygen, Soniqs locked in a Sweden spot as TSM lost 4-7 to Mirage in the following game. The day prior, Alexander "Yeti" Lawson came on the show following the 8-6 over Mirage:

In terms of Sweden, let’s get there first, but we’re looking to have a better performance than we did in Mexico. We’ve got some plans on how we’re gonna prepare for that event as opposed to how we did in Mexico so yeah, first we gotta make it there first.

Once again, here’s what supr had to say to remember KiX:

The last team to qualify was DarkZero, as their 7-2 win over beastcoast in the final game of the season put them ahead of TSM in fourth place. The day prior after their 7-3 win against Oxygen, Troy "Canadian" Jaroslawski said the following:

We had a bit of a slow start to the season; I think today was probably our best showing yet. Just a slow start as I was new to the team, how I meshed with our play style, just figuring things out as it goes with a new team. But we got some more time to work on things and I think we’re getting on the right track now.

Canadian then spoke about KiX’s impact on the game and his ability to bring more people fans into R6 esports:

Following DZ’s final game, there was no post-game interview. Instead, the casters said some final words about KiX as the NAL ended its league portion for 2021:

As the Elite Six victors, FaZe enters the Major as the top-seeded roster from the number one region, making them arguably the event’s favourites. Here’s what Gabriel "cameram4n" Hespanhol had to say about the Major after their 2-1 grand-final win over oNe:

Team oNe topped Group B and defeated NiP in the playoffs before losing to FaZe in the grand final.

Following their semi-final win, Lorenzo "Lagonis" Volpi came on and said the following:

Our main goal was to qualify for the major in Sweden so today we didn’t play with pressure because our main goal was qualifying as we’ve done that. For [the CES final] with the way we won this game I think everyone really wants to win the Copa Elite Six.

That is a tournament we have never won and is kinda a national tournament. We have only won the Major so it would be a good trophy for us.

Finally, NiP took down their long-time rivals Liquid in the quarter-finals to qualify for Sweden, only to then be bested by oNe in the semis.

After this game, Julio Giacomelli said the following about their surprise result against Liquid:

We always step up in the important matches. It’s not like we do it on purpose, it’s just natural, everyone is on their maximum.

We studied [Liquid] a lot and we had played badly on Kafe against FaZe so they picked it but I don’t think that was a good decision because we have a good Kafe, we just played badly in that one game.

The final team to qualify was FURIA, who topped Group A but then lost 2-0 to FaZe in the semi-final. As the group stage wasn’t cast by the main Rainbow6 channel, there was no English-language post-game interview for FURIA during the Elite Six Cup.

During the last week’s APAC Playoffs, the Chiefs had by far the best performance. The Australian side took the third APAC seed at the Major in straight maps. Raine "Dgtl" Wright said the following after their 7-4, 7-1 stomp of Elevate in the winners’ final:

Devmarta: You always say your team tries to think round by round and try to not think about the pressure. How are you gonna do that, you’re playing in a global Major in Sweden?

I don’t know because I haven’t done it before. Hopefully we’ll take the same gameplan, I don’t know. We’ll figure it out. I might have to ask Ethan about that because he’s the man I’d ask questions to in that situation.

I wouldn’t imagine it’d be too much different. You just sort’ve gotta keep your head in the game, ignore the outside stuff that’s happening and focus up really, I don’t know.

I can’t wait to meet the other teams from other regions [in Sweden] to say what’s up to those boys and pick their brains a bit. Something I’ve thought about and something I might finally get to do.

Joining Chiefs in Sweden will be DWG KIA. They defeated Elevate in a close 2-1 scoreline in the lower bracket finals. Via a translator, SungJoon "coted" Jo said the following:

Because we were initially in the lower bracket we were very scared of each game as each game could result in a loss. So every game was very scary but with this win, all of that scare and fear is all gone.

Our only objective right now is to survive the Sweden [group stage]. 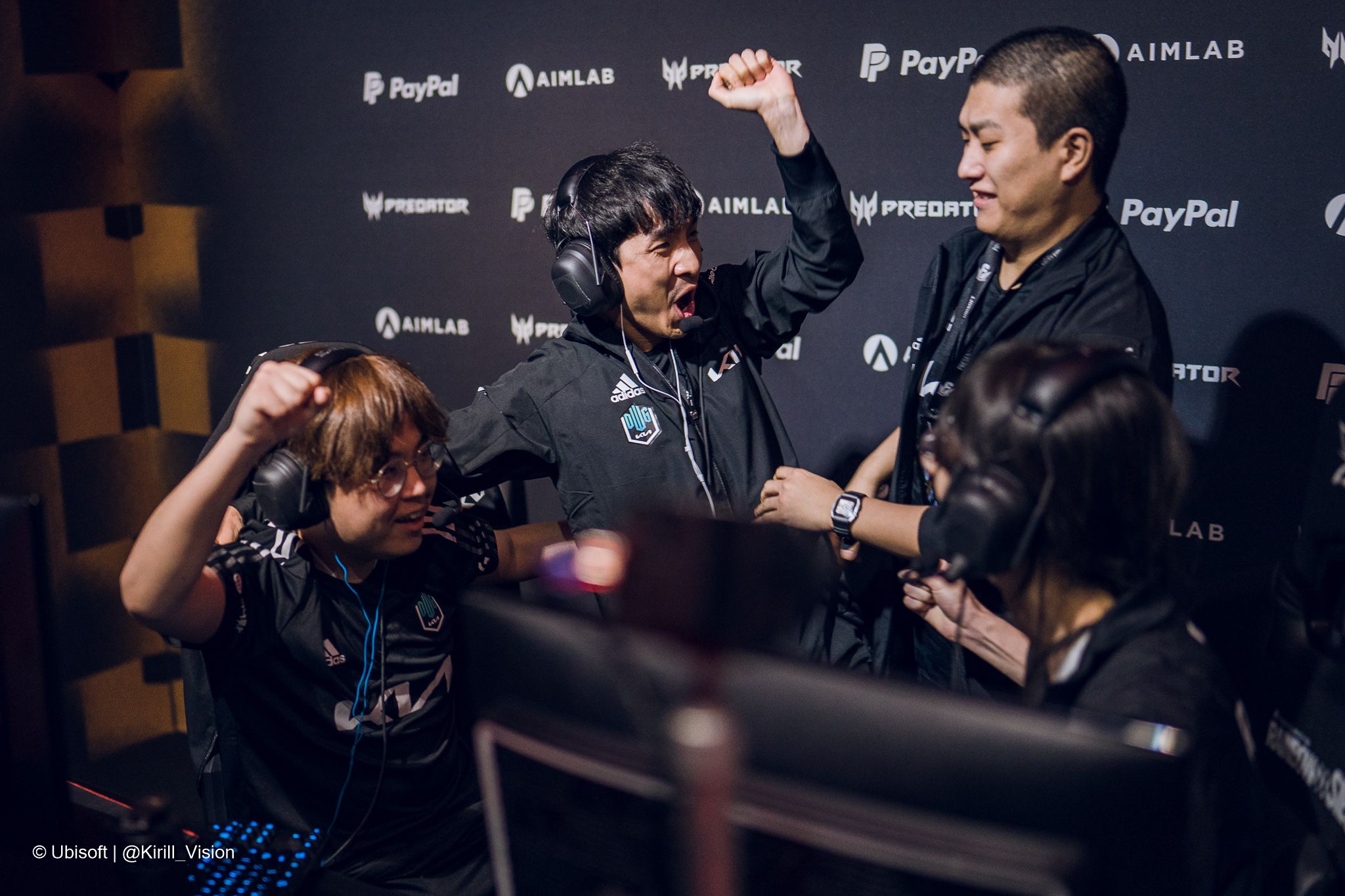 With these results, all 16 teams are confirmed for the Six Sweden Major, which starts in less than two weeks time. SiegeGG will be covering this tournament with news, stats, highlights, and predictions so be sure to check back as we near the event.