With week five of play now over, let’s have a look at the games and results in the APAC League tournaments.

This week saw the sixth day of action in both the APAC North and APAC South leagues, as big upsets happened in both sub-regions. Let’s take a look at some of the key highlights and storylines as we near the end of Stage 3.

Starting in the North, GUTS secured what’s probably the biggest win in their history. Their 7-2 result over mantisFPS now puts them in a very strong position to win the APAC North League for Stage 3 and qualify to the Six Sweden Major.

This result saw Hikaru "Li9ht" Osawa secure a 1.55 SiegeGG Rating with 10 kills to five deaths, while Kazuki "Lily" Yamane secured eight kills to just three deaths. Between them, the two managed to secure a massive five attacking round wins on Villa, which inevitably led to the map win once sides switched.

GUTS now sit tied with mantis at the top of the APAC North standings, but hold the head-to-head result in their own favour. Next week, they face seventh-placed Fnatic, while the Koreans face eighth-placed FAV.

Short of a massive upset, GUTS, who feature three members of Nora-Rengo’s ESL Pro League Season 7 roster, should be able to lock in their first global appearance under the GUTS banner. 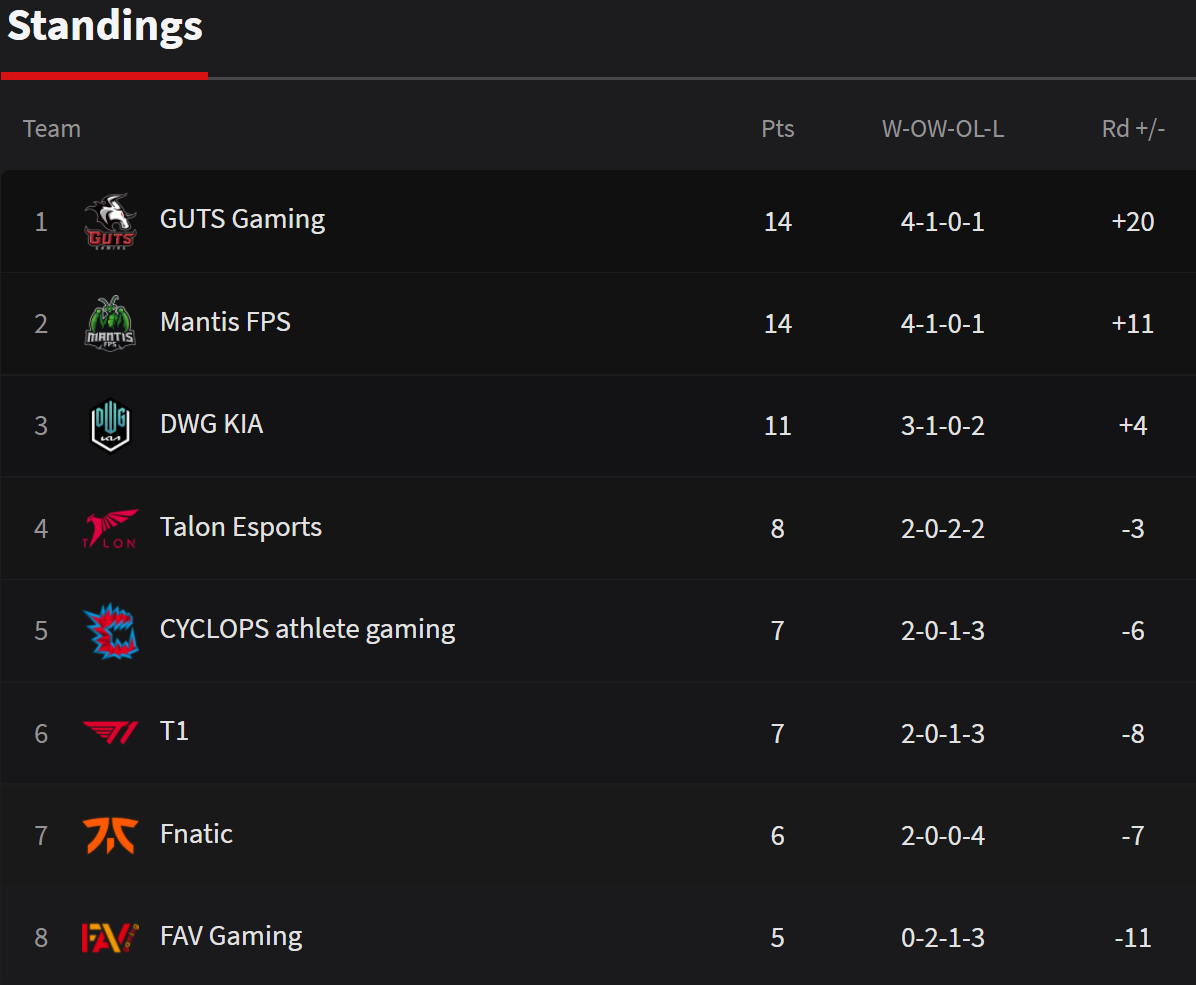 Also of note this week was a 7-4 win by T1 over Talon. Not only was this a second win a row for T1, it was also only their third of the entire 2021 season.

This result hinged largely on the impressive fragging capabilities of the former player-coach-turned-caster, Jaehyun "PJH" Park. The now-player secured 11 kills to four deaths across the 11 rounds, which included a 1v3 against Masaki "AzzyyyS" Someya, Daeyeong "Demic" Kim, and Sihyeon "Soldier" Lee to close out the map.

While T1 are already locked into a relegation fight to remain in the APAC North league for 2022, there is now a chance for them to qualify for the APAC Playoffs and perhaps even the Six Sweden Major.

To do this, they’ll need to beat DWG next week and simultaneously hope for a close game between CAG and Talon -- an unlikely but possible outcome.

Finally, Fnatic’s 4-7 loss against CYCLOPS means the Australians have fallen down to seventh place and cannot qualify for the APAC Playoffs. This marks a disappointing stage for them, with this being their worst result this season, despite playing with their full starting lineup for almost the entire stage.

Finally, DWG beat FAV 7-1 to guarantee themselves a spot in the APAC Playoffs, while FAV’s window to escape the relegation zone has become even narrower.

The biggest result of the week in APAC South saw the Chiefs beat Invictus Gaming in a rather impressive 7-4 scoreline on Kafe. While Matin "SpeakEasy" Yunos initially took the advantage with two multi-kills, putting iG ahead, the Chiefs fought back, with Raine "Dgtl" Wright winning a 1v2 against Jeremy "HysteRiX" Tan and Glen "Lunarmetal" Suryasaputra to tie up the scoreline.

Two more rounds gave Chiefs the half before they pushed even further ahead with a Reading Room defense to start off the second half. While iG started to push back, the Chiefs’ newest player of Ethan "Ethan" Picard stopped their streak with a 1v1 over Lunar, who was attempting a 1v4 clutch himself.

Finally, Chiefs ended the game with an almost flawless defense of the kitchen site, as iG was forced to make a very late execution.

This result pushes Chiefs Esports Club up into first place, one point ahead of iG in second, and two ahead of Elevate in third. Chiefs also hold the head-to-head against both these teams and while they face last-placed ORDER next week, iG and Elevate are set to face each other.

This puts the Chiefs in a truly excellent position to lock in their Sweden Major qualification as APAC South’s winners next week after finishing last stage way down in fifth. However, like the Knights failed to go to Mexico in Stage 2, it is unclear if the Chiefs will even be able to attend the Sweden Major should they qualify. 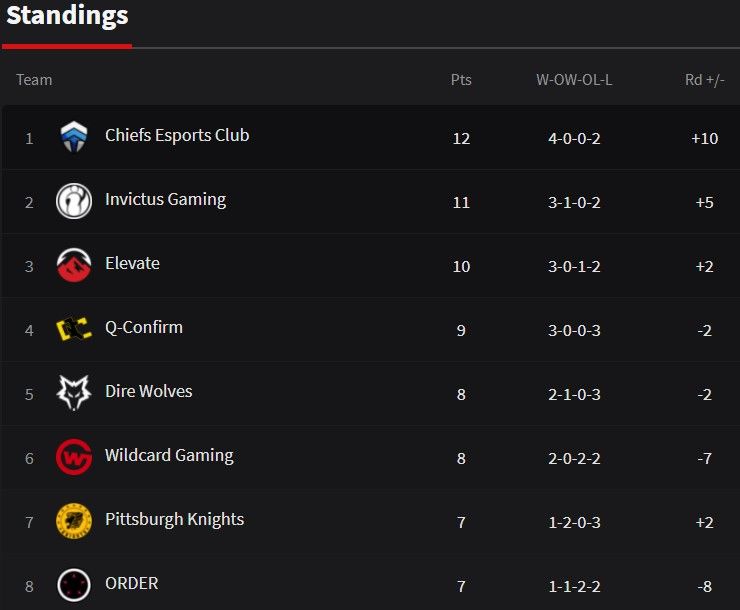 One thing that really helped the Chiefs reach this position was the Knights vs Elevate result just prior to this game. Here, the last-placed Knights took third-placed Elevate to overtime due to a fantastic performance from Harper Hayward, who finished with a 1.37 SiegeGG Rating.

Going into overtime, the game was eventually won due to a 1v4 clutch from Knights’ Joshua "Jsh" Coombes, as Adithep "DCH" Channuan fell off of the plant to re-position while not realising there were zero seconds remaining.

Elsewhere, the two remaining games saw the seventh-placed QConfirm get a 7-2 win over ORDER, which pushed the latter team from fourth to last place, while an 8-7 win from Dire Wolves over Wildcard meant they swapped positions in fifth and sixth place.

Next week will see the final games in the APAC North and South Leagues this season. In the North, mantis will need more points from FAV than GUTS gets from Fnatic if they hope to nick the Six Major spot off of the Japanese roster.

In the South meanwhile, iG and Elevate will face each other, with the winner hoping that Chiefs will lose against ORDER so that they get the auto-qualification spot instead.

The games will take place as usual on Tuesday and Wednesday, with the playoffs then kicking off on the 18-20th as we get closer to knowing the four APAC teams we will see at the Six Sweden Major.